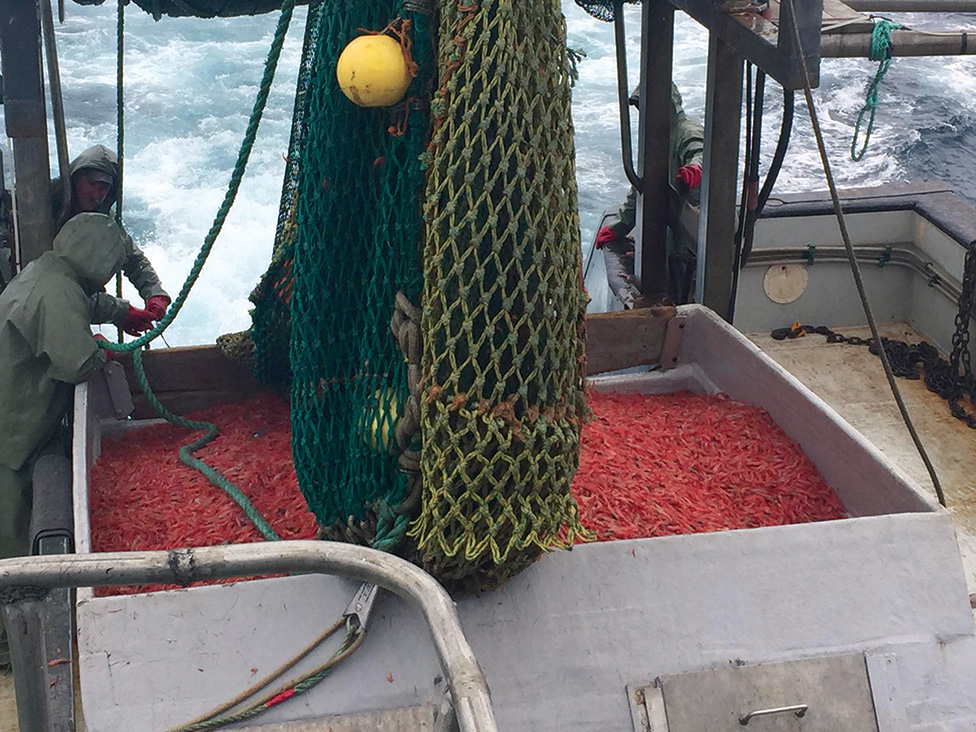 A year ago, the shrimp fishery off Newfoundland and Labrador was facing much uncertainty — 12 months later, nothing appears to have changed.

Last fall, in the wake of quota cuts, harvesters that depend on the lucrative shrimp fishery were very worried.

Then, in September of last year, the North Atlantic Fisheries Organization (NAFO) recommended a moratorium for the shrimp stock on the Grand Banks. NAFO’s advice was released specifically for the 3L fishing area. 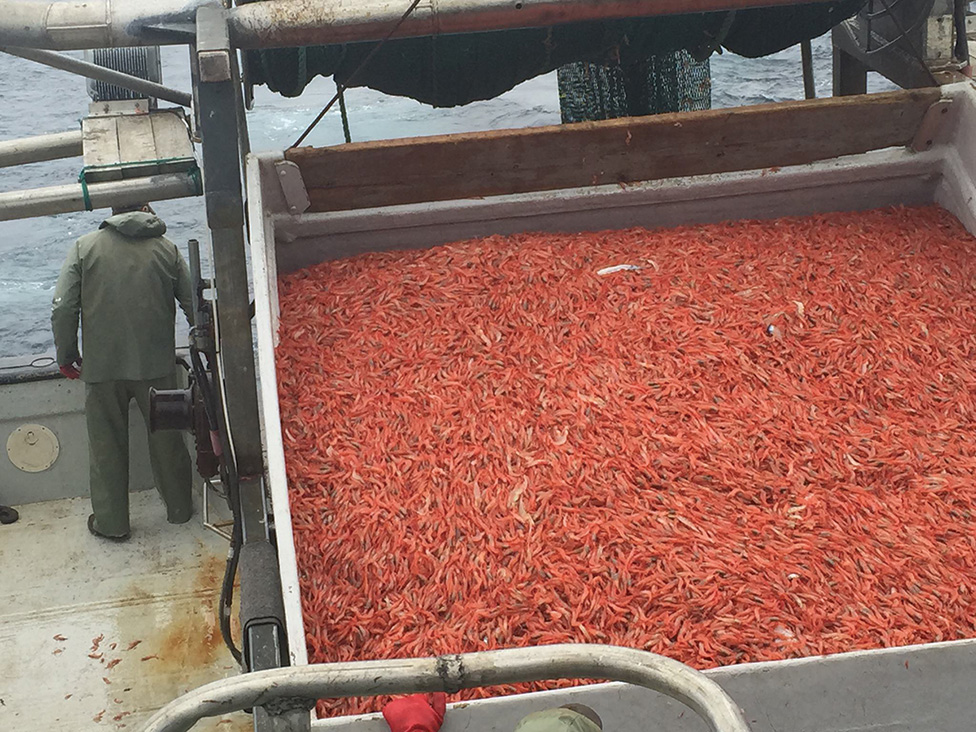 Just one of the plentiful 2015 shrimp catches taken by Newfoundland fisherman Murray Lavers.

However in March of this year, in the face of mounting opposition from Fish, Food and Allied Workers (FFAW-Unifor) and a unified all-party committee from the Newfoundland and Labrador provincial government, the Department of Fisheries and Oceans (DFO) rubber stamped a proposal from the offshore and inshore shrimp fleets that would see no cuts to shrimp quotas in fishing areas off the coast of Newfoundland and Labrador in 2015 — notably in critical northeast coast Area 6. 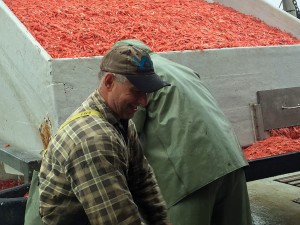 By all accounts, the 2015 shrimp fishery was a success for harvesters. Fishermen were reporting excellent catch rates through the season — most getting their quota long before the season was over. The price also remained strong, leading to a profitable fishery for most.

Port Saunders fisherman Murray Lavers reported a strong season. In fact, he said catch rates were though the roof this year.

“Hard to believe there is no resource left,” Lavers told The Navigator.

Twillingate fisherman Casey Baggs concurred that the 2015 season was one of the best in years.

“We had big tows and good catches. No problem at all getting our quota. It was great to see and hopefully the quotas will increase next year.”

Looking ahead to the 2016 season, the same uncertainties remain. Quotas are still an issue of concern.

At its recent September meetings in Halifax, the Northwest Atlantic Fisheries Organization (NAFO) once again, albeit quietly, recommended a moratorium for the shrimp stock on the Grand Banks — specifically for the 3L fishing area.

The responsibility for 2016 shrimp quotas now lands on the desk of newly appointed Liberal Fisheries Minister Hunter Tootoo from Nunavut. Tootoo’s appointment was a surprise to many as there was an overwhelming feeling a MP from Atlantic Canada would land the fisheries portfolio.

With the new Liberal government still stretching it’s governmental legs, there has been no indication on when a quota decision will be coming from DFO — most likely will not be until early 2016. However, during the recent election campaign, Justin Trudeau did made a promise to closely look at the ongoing issue of adjacency as it relates to quota allocations. 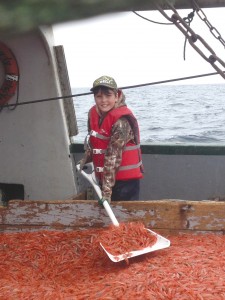 10-year-old Griffen Baggs was part of his father’s (Skipper Casey Baggs) crew that fished shrimp this year out of Twillingate.

And to the chagrin of many, the much-debated and controversial Last In, First Out (LIFO) policy still remains in existence — with no solution in sight.

The torch has now been passed to Minister Tootoo to take on this controversial and divisive file.

Former Fisheries Minister Gail Shea, who went down to defeat in her P.E.I, riding, was quite adamant in maintaining the policy.

As part of of its 2015 shrimp quota announcement, DFO highlighted the fact it felt LIFO was still a fair policy;

“The Last In, First Out policy, known as LIFO, was introduced in 1997 after significant consultation and has been included in every Northern shrimp fisheries management plan for more than 10 years. It has been consistently communicated to stakeholders that should there be a decline in the abundance of the resource, new participants/allocations would be reduced or removed from the fishery in reverse order of gaining access — Last In, First Out. LIFO was also reviewed by a third-party independent reviewer in 2012 who confirmed that the Department was appropriately applying the policy when required in a fair and transparent manner.”

Both the FFAW and Newfoundland and Labrador government have vowed to keep fighting for the abolishment of the controversial policy.

While the shrimp fishery in this region has been in decline for several years, other similar fisheries in the Atlantic are showing signs of a rebound.

Promising stock surveys show West Greenland’s coldwater shrimp fishery may be recovering, ending years of steady declines that have contributed to the fall in global shrimp supplies and record high prices in the market. A report from the Greenland Institute of Natural Resources recommended that the 2016 coldwater shrimp fishery quota in West Greenland be set at 90,000 tonnes. This represents a 30,000-tonne increase from the Institute’s recommendation for the 2015 season.

The advice is also 23 per cent higher from this season’s quota, which was ultimately set at 73,000 tonnes for 2015. Greenland still has to finalize the shrimp catch quota based on the Institute’s recommendation. This includes how the catch will be divided between the offshore and inshore fleets.

A similar scenario is being played out in Norway, where the coldwater shrimp fishing industry was recently told it could nearly double its catch quota for the 2016 season in the Skagerrak and the Northern North Sea. A survey from the International Council for the Exploration of the Seas (ICES) found Norwegian fish managers could follow the maximum sustainable yield approach to set the catch quota for the 2016 season. This would set the catch limit at 21,500 tonnes, which could result in about 18,598 tonnes in landings.

That would be almost double the 9,777 tonnes in landing advice ICES handed down last year.

Last year the Norwegian coldwater shrimp fishery had a TAC set at 7,630 tonnes.

No Replies to "2016 Shrimp Fishery Continues to Face Adversity"