As Luck Would Have it — Part II

When their 52-foot fishing vessel nearly totally submerged about four miles from Port Saunders on Newfoundland’s northwest coast, Captain Raymond Ryan, along with his two sons, Maurice and Rene jumped ship. Raymond and Maurice managed to hold on to a wooden fish chute to keep their heads above water but could do little to help themselves. Rene was nowhere to be seen and presumed drowned by his dad and brother. Their chances of survival looked grim but fate was somewhat kind on August 7, 1991 and several things conspired favourably to snatch all three from the jaws of death. This is Part II of “As Luck Would Have It.”

The luck of the day will become apparent later but trying to hang on to a small piece of board in the cold northwest Atlantic Ocean without life jackets and at the mercy of seas producing 15-foot swells did little to make Captain Raymond Ryan and his son Maurice feel lucky. Compounding their misery was the fact that they didn’t know if Raymond’s mayday was heard and whether anyone knew about their plight.

But the most distressing concern was that Rene was nowhere to be seen which led Raymond and Maurice to assume he didn’t survive. For 59-year old Raymond, the thought of having lost his son was almost unbearable and subdued his will to go on.

“Dad was saying that he didn’t think he could make it, that he couldn’t hang on so I tried to keep talking about other things to try and keep his mind off it — sometimes I would yell and even curse at him,” Maurice recalls.

Maurice’s nagging worked and his dad continued to cling to the wooden fish chute that provided enough buoyancy to keep their heads above water as they both hoped and prayed that Rene was still alive.

The northwest Atlantic Ocean is never warm; not even in August and it is only a matter of time before hypothermia sets in and weakens one’s physical and mental abilities. Both Raymond and Maurice silently wondered if they would last long enough to make it to safety.

Their spirits were lifted somewhat, knowing they were inching toward land but the closest shoreline was still more than a mile away and judging by the hour or more it took to get this far, it would be at least another hour to get there.

“There is no way to properly describe the feeling of what it was like out there — a minute seemed like an eternity with endless stuff going through your mind,” Maurice says, adding that he was also concerned that the section of Spirity Cove that they were drifting towards was dotted by craggy rocks several feet out from the beach.

He knew the 16-foot swells they were experiencing offshore were getting larger and would turn into cresting breakers in shallow water which meant they risked being battered to pieces on the rocks, mere feet from safety.

The Ryans received a ray of hope when they heard the sound of a vessel’s engine not far away. However, the vessel was always in the trough of the large ocean swells at the same time Maurice and Raymond were at the bottom of another trough and subsequently the boat passed by and nobody could see the men in the water.

“We saw his spar once or twice but that was all,” Maurice says.

As disappointing as it was that a possible rescue boat didn’t spot them, the Ryan men took some solace in that their mayday may have transmitted and that rescuers were possibly looking for them.

They were right. Tony Ryan, a cousin, did hear the mayday and it was his boat that passed nearby.

“Tony was fishing not too far from us and when he heard the mayday, he cut his nets and headed toward where he thought we might be. Another guy from River of Ponds also heard the mayday but his engine wouldn’t start or something,” Maurice says.

Another man knew the Ryans were in trouble. Sam Hoddinot, a veteran fishing skipper from Hawkes Bay was in Spirity Cove that morning and noticed the Dolores R had disappeared from view. An experienced man of the sea, Sam wasn’t going anywhere until he knew that if in fact a vessel was sinking and, if so, what happened to the crew.

When he first realized the vessel might be in trouble, he had no idea how pivotal his role would become during a rescue event later that day.

During the second hour in the ocean, Maurice was growing increasingly worried about his dad. Raymond, 59, was showing signs of losing strength and even talked about giving up. At 33, Maurice was stronger and still doing relatively well and kept encouraging his father to hang on a little longer because the shoreline was looming larger and they were still drifting in the right direction.

As Raymond and his son drifted closer to the rocky shoreline and shallow water, Maurice’s earlier concerns were soon realized. The swells turned into large cresting seas and he and his dad were in serious danger of getting bashed against the rocks near the beach.

When he eventually spotted the two men clinging to a piece of board being washed toward the rocks, Sam Hoddinott had a brilliant idea. Sam knew the danger the men faced and ran along the shoreline to see if he could find something to help.

He saw a long pole that he could extend out several feet, but incredibly he saw something else. There was a lengthy piece of rope also washed up on the beach. Sam quickly tied the rope to the end of the long stick and ran to where Raymond and Maurice were nearing the shoreline. Sam skillfully cast the rope mimicking the same motions as casting a fish line on a rod and reel.

Miraculously Sam’s aim was perfect and Maurice caught the rope on the first cast. With Sam onshore and feet firmly planted on the beach he held the stick and line tightly while Maurice used the extra leverage provided by the rope to guide himself and his dad around the most menacing rocks and finally, close enough for Sam to grab and haul them both to safety.

It was an amazing rescue scene that was so perfectly executed; it would normally be reserved for fiction or a suspense movie.

Also like in the movies, the next scene unfolded in moments of disbelief.

As Raymond and Maurice were finally able to stand, they saw a man climb up from the beach over an area known locally as ‘The Scrape.’ Maurice didn’t know who it was but when the man was walking towards them and as he got a little closer, it looked like Rene.

“I didn’t think it was him first because this man was wearing an orange life vest and when I saw Rene jump from our boat, he had his rubber clothes on,” Maurice explains.

What Maurice didn’t know was that Rene did get a life vest but for some reason, he put his rubber jacket on over the vest and later discarded it.

It was a highly charged emotional few minutes when the three men were united on the beach, each thinking the other was dead.

Rene explained that he found the life vest before jumping overboard and in the panic he decided to swim for shore with the intentions of running to get help to rescue his father and brother. 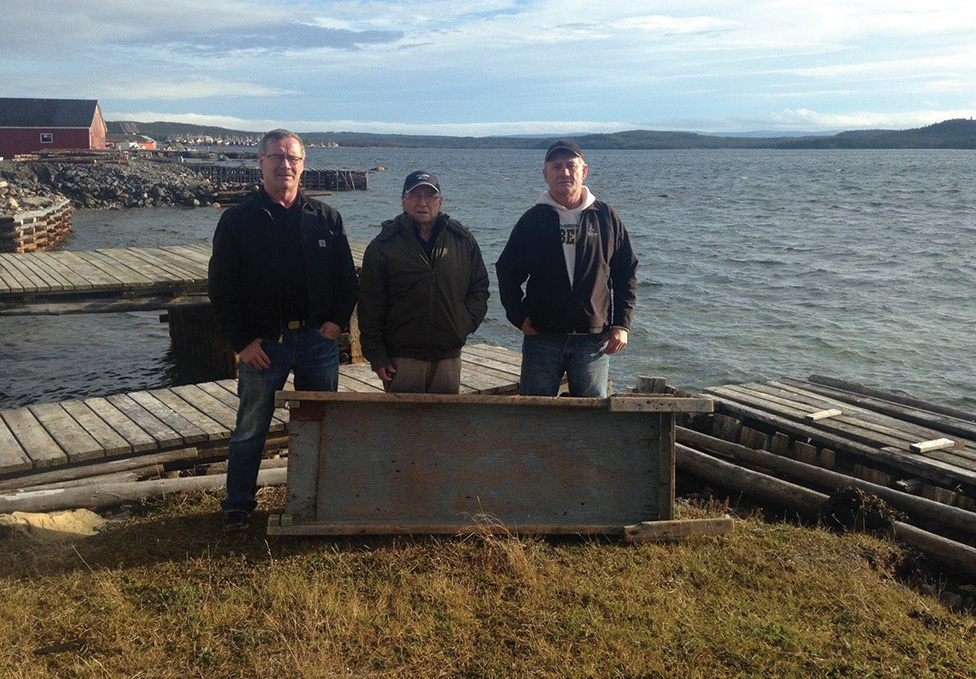 Rene, Raymond and Maurice Ryan with the wooden fish chute that saved the lives of Maurice and his father, Raymond in August, 1991. Photo; courtesy of Maurice Ryan, taken November 22, 2015.

Meanwhile, when Raymond’s mayday went out, the Coast Guard initiated a helicopter search and, as luck would have it, the chopper arrived on the scene just minutes after the Ryans crawled ashore.

“The chopper touched down just a few feet away and just in time too,” says Maurice. He explained that Raymond was rapidly losing strength and required medical attention immediately — a few minutes later might have been too late. Raymond was hospitalized but made a full recovery.

Raymond Ryan and his two sons survived an amazing test of courage and strength but they also realize that their survival hinged on several factors that had any one had not happened; they would not be alive today.

If that small wooden fish chute had not floated along next to Raymond and Maurice, they would not have survived. If the wind and currents had been offshore instead onshore, the ending would have almost certainly been tragic. Had Sam Hoddinott not been as smart and resourceful as he was, Maurice and Raymond might have been seriously injured if not killed on the rocks.

Had the mayday not transmitted there wouldn’t have been a helicopter dispatched.

As close as the three men came to losing their lives that day, they were very fortunate that, as luck would have it, many things worked in their favour on August 7, 1991.

No Replies to "As Luck Would Have it — Part II"