Brothers to the Rescue

Graham Hancock decided to quit fishing for a living when cod was placed under a moratorium in 1992.

The (then) 34-year old from Bide Arm, on Newfoundland’s Great Northern Peninsula, only had a groundfish license and without cod, it would be impossible for him to make ends meet so he quit and took a job onshore.

In his approximately 15 years fishing commercially, Graham never had a scary moment on the water but 20 years later, he came perilously close to drowning.

On Sunday, November 17, 2013, Graham and his friend Tom Fillier were hunting turrs (saltwater birds known also as murres) near Conche, north of Bide Arm. When a thick fog rolled in, Graham decided to leave his 19-foot boat at the wharf in Conche overnight. There was no need to take chances on trying to steam all the way around the rocky coastline to Bide Arm without good navigational equipment, especially when home was only a 40-minute drive by road.

Graham and Tom made plans to return to Conche the next day. Monday’s forecast called for bad weather, but the storm wasn’t expected to start until late afternoon/early evening so the two men planned to leave Bide Arm about 10 a.m. 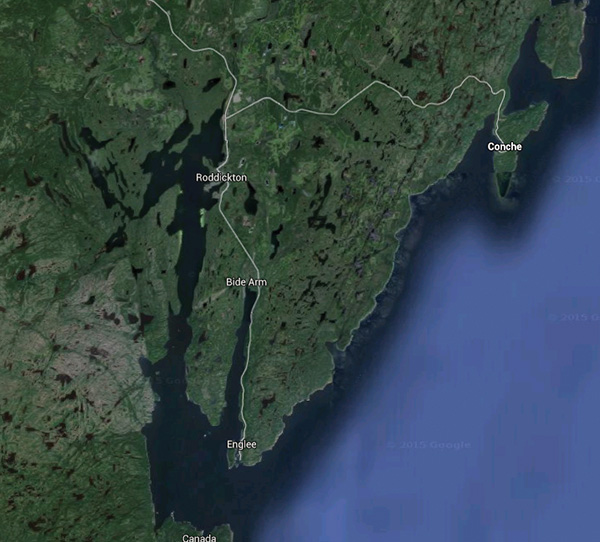 Their rationale was that if they left Conche by 11 a.m. that morning, they would have plenty of time to get home ahead of the storm. In fact, Graham figured they could shoot a few turrs along the way and still be home by 2 p.m.

Tom and Graham arrived in Conche as scheduled  Monday morning. Weather and sea conditions were both fine for saltwater bird hunting. They stopped twice to take turrs and by 12:30 p.m. they had about a dozen birds stowed nicely on the floor of boat.

A little while later they saw more birds so Graham put the motor in neutral to add another turr or two to their collection.

When he tried putting the engine in reverse to pick up a bird, nothing happened. Puzzled, he tried again, but still nothing. He then pushed the gearshift to forward but the gears were not engaging and the boat, like the turr, was dead in the water.

The ocean was fairly smooth with just a light breeze, but when Graham realized he only had one oar onboard, the three miles to nearest land seemed like a very long and worrisome distance away. Not long after Tom started paddling, things suddenly took a serious turn for the worse — the oar broke in half.

Maneuvering a 19’ x 7’ fibreglass boat equipped with a four-cylinder outboard motor with just a short piece of wood was practically impossible.

Tom and Graham didn’t worry — at least not for a while. Despite the typically chilly mid-November weather off Newfoundland’s Northern Peninsula, both men were dressed warmly and had enough food to last a day or more. But that wasn’t even a concern at first.

“I said to Tom that it shouldn’t be long before somebody comes along because there were other boats out that day and usually someone comes by to see how you’re doing with the birds so all we had to do was wait awhile,” Graham said.

Waiting was the only thing happening.

The two men from Bide Arm could see boats in the distance but none were coming toward them. In fact, most were heading back to their home ports because the sky was getting darker, the ocean swells were getting larger and the wind was changing direction, indicating the storm was approaching as forecasted.

Graham tried texting his wife to let her know they had trouble. He wanted to tell her that they were not far off an area called Bioutio, known locally as “Buddy Too” about three miles north of Englee. He tried sending the message but there was no mobility service available.

Buddy Too might have offered a safe haven for the stranded men if they could manage to get there. Over the years, hundreds of fishermen and bird hunters found shelter inside some of the cabins in the small cove as they waited out rough weather and seas, but Tom and Graham would not be so lucky.

Despite their hopes that the increasing southerly wind would push their boat through the mouth of the cove, the winds strengthened and their boat drifted past their best hope for safety. They were now headed in a northerly direction, inching closer back toward Conche with large, menacing rocky cliffs towering from the ocean looming in front of them.

Their hopes of finding shelter and comfort were dashed because there wasn’t even a piece of shoreline or beach large enough to stand on even if the boat was still in one piece when it reached the rocks. As seas grew bigger and winds stronger, their only hope was to keep away from cliffs by whatever means possible.

As their small boat grew dangerously close to the 40-foot cliffs, Graham decided to throw their grapple over the side. It was only a small grapple but the water was shallow and the mooring device hooked solidly into the rocky bottom and slowed the boats movement almost to a standstill. Relieved by the momentary respite from certain death, Graham thought about something else he could do that might help. He created another grapple — a small makeshift one to work in conjunction with the real one.

“I had a jigger line onboard so I fastened three jiggers on the end of the line and put that one over the side and sure enough, it hooked bottom and held the strain and we were able to stay in the same spot for a while anyway,” Graham says.

However, they were in a desperate situation. With the seas getting higher and the winds stronger, they worried that it was just a matter of time when their grapples could no longer stand the strain. They also knew that it was unlikely that anyone would venture out to search for them because the storm was getting far too bad for anyone to take a chance on leaving port until the next day when the weather abated.

But there was one fisherman who thought he could help. Ralph Randell, captain of the largest fishing vessel in Bide Arm and also a friend of the two stranded men, grew concerned about Graham and Tom when the storm was approaching that afternoon.

Ralph knew that his friends had left Conche late that morning and should have been home by 2 p.m. Ralph was skipper on the White Star I, a 65-foot fishing vessel that he and his four brothers owned and operated together.

As a member of the Canadian Coast Guard Auxiliary, Ralph knew that if a vessel was in trouble in his area, he would likely be notified and possibly asked to conduct a search and rescue mission — weather and sea conditions permitting.

As a friend and neighbour of the two overdue bird hunters, Ralph kept a keen eye on the harbour in Bide Arm waiting to see if they had arrived, although he wasn’t particularly worried because he figured that if the men were caught in the storm, they would probably take shelter in Buddy Too and wait for things to settle down.

But still, he was on edge and when his phone rang around suppertime that evening, he had a gut feeling that something was wrong.

“My wife answered the phone and I could tell by the way she was talking that it was about the boys. I knew exactly what was going on. I knew they were in trouble,” he says.

He was right. The boys were in trouble — big trouble.

Join us next month for the nail-biting details when three brothers put their own lives at risk to save their friends in Part II of “Brothers to the Rescue.”

Mail Order Cod on The Menu

No Replies to "Brothers to the Rescue"