Last month, I discussed how to measure the competitiveness of our industry.

This month, I will discuss how our industry performs against these measures.

Before I get to the heart of the discussion, I will make a few observations about our share of the market for fish and seafood products. As I said last month, market share is a widely used measure of competitiveness but it is not appropriate for the fishing industry, simply because production is limited by resource abundance and the total allowable catch and cannot increase in response to growth in market demand.

Nevertheless, a brief discussion about market share can help put the other measures of competitiveness in perspective.

For reference purposes, I have included a table of fish landings in Atlantic Canada for three years — 1952, 1975, and 2012. Essentially, the table shows how the industry evolved over 60 years.

In 1952 — the first year Newfoundland catches were included in Canadian totals — fish landings in Atlantic Canada totaled 485,227 metric tonnes. Worldwide landings were about 20 million tonnes and aquaculture production was almost negligible, so Atlantic Canada represented about two per cent of world supply.

In 2012, 60 years later, Atlantic Canada’s landings amounted to 673,922 tonnes, while the global supply included 91.3 million tonnes from capture fishing and another 66.6 million tonnes came from aquaculture. Despite an increase in landings of nearly 40 per cent, capture fishing in our region represented just 0.7 per cent of the captured total and 0.4 per cent of overall global supply. 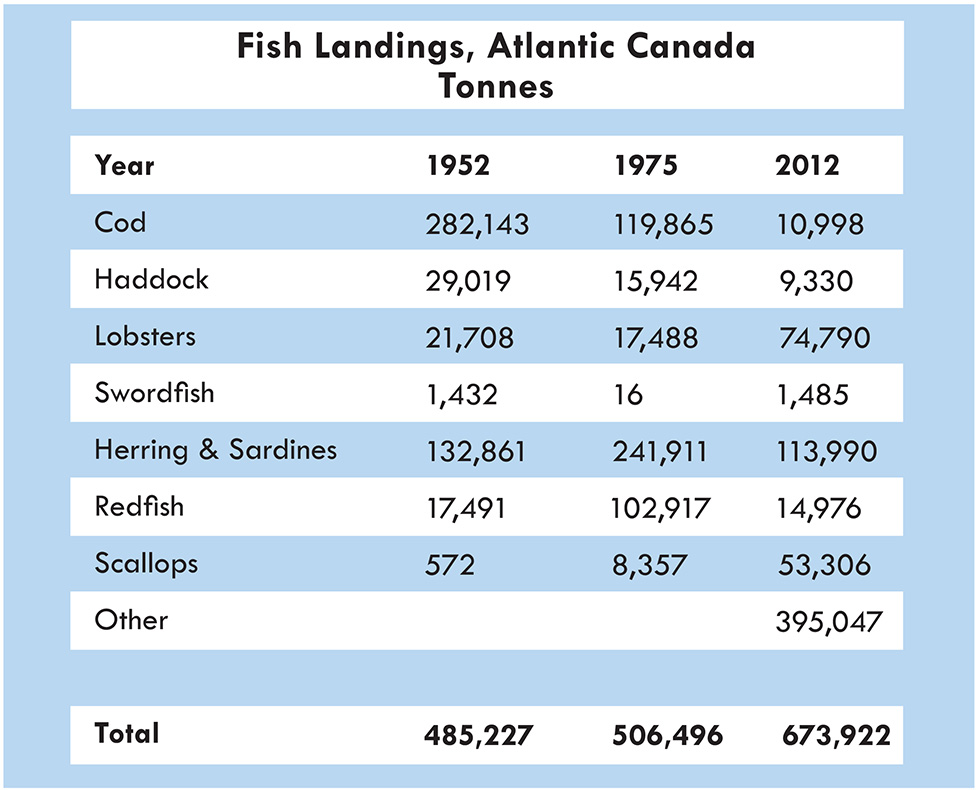 Measured in terms of world market share, we weren’t really very important in 1952 and we were merely a blip in 2012.

However, we weren’t really competing in the global market in either year. Instead, we competed mainly in a relatively small number of markets that were interested in the particular fish species and products we were able to offer and we were important players in at least some of those markets.

In 1952, we offered mainly cod and herring and our markets were primarily in Europe and the United States. The situation was not a lot different in 1975, shortly before we got the 200-mile limit. Cod catches were at 42 per cent of 1952 levels but catches of lower-valued herring and redfish had increased, so overall tonnage was up slightly. By 2012, the situation had changed drastically. Cod and other groundfish catches were very small by historical standards and the resources the industry depended on had changed a lot.

Catches included a much higher proportion of high-priced shellfish species, including lobsters, scallops, and others grouped together as ‘other’ in the table, such as crab, shrimp, and clams.

Herring catches were below 1952 levels, but capelin catches — also included in ‘other’ — had increased. We still sold large amounts in the United States and some in Europe, but our market scope had expanded to include Japan and China, as well as a few other countries interested in our shellfish.

Although it might appear that our markets had not changed much, they had actually changed quite a lot.

In 1952, our output of cod included a very high percentage of saltfish and most of the herring was likely salted, as well. Much of the production was sold in Europe and some was sold in the Caribbean, our longstanding traditional markets at the time. 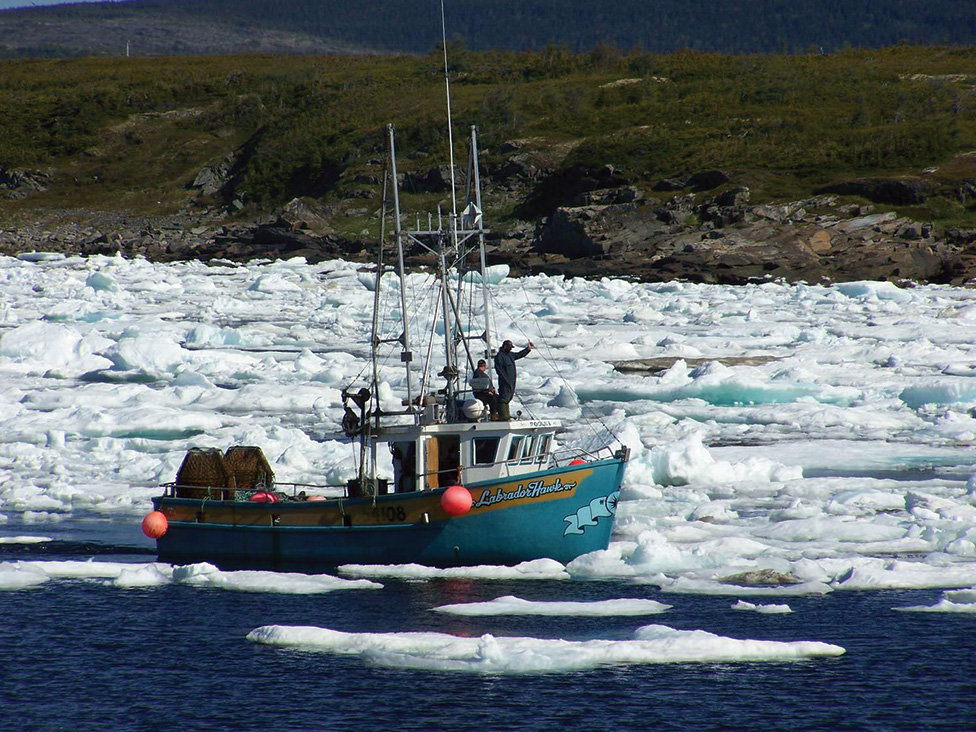 By 1975, we were selling mostly frozen products and very heavily dependent on the market in the United States. Sales to Europe had become more difficult, because of the formation of the European Common Market, a predecessor of the European Union and because European fleets were fishing the stocks off Canada’s East Coast and bringing them home.

In 2012, we were selling more live lobsters but still selling most of our products in frozen form. Nevertheless, the buyers likely were not the same as those who bought our low-priced frozen fish blocks in 1975, to be turned into fish sticks and breaded and battered fish portions. Because we were selling high-value shellfish products, they were finding their way to different users and uses.

What all this means is the products we sell have a significant impact on the opportunities we have available and where we sell them. The relatively few affluent countries in the world, mostly located in northern latitudes in Europe, North America, and increasingly Asia, are the most attractive markets and will continue to be, simply because they can afford to pay the high prices we need to cover our costs.

However, markets are about more than geography. Within those countries, there are different buyers, users and uses, each of which is willing and able to pay a different price.

As I have said before, it’s not about whether we can sell our products; it’s more about what prices we can get for them.

This was a very significant issue in our industry during the 1980s, when Icelandic cod products, similar to those produced in Atlantic Canada, typically sold for U.S.$0.20 to $0.30 per lb more. That meant Icelandic producers received U.S.$1 to $1.50 more for a five-lb pack, U.S.$2 to $3 more for a 10-lb shatterpack and U.S.$3.30 to $4.95 more for a 16.5-lb block. Iceland’s output also included a much smaller percentage of low-priced blocks than ours did.

Because of these differences, the Icelandic industry was prospering at a time when ours was insolvent and had to be restructured at considerable expense to the public treasury, providing a good indication of our competitive weakness. 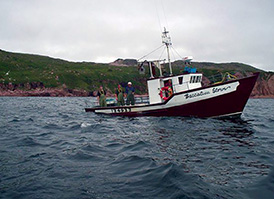 In the same way that geography, species, product form and usage are significant factors in output value, so is the preservation method used.

Fresh products typically sell for much higher prices than frozen products and frozen sells for higher prices than salted, dried, or canned. People want their fish to be as fresh or fresh-like as possible. We haven’t developed substantial markets for fresh crab or shrimp but fresh cod often sells for U.S.$3 per lb more than even high-quality frozen cod in the U.S. market.

Because fresh products must be sold very soon after catch, when catches are made has a very significant impact on output value. If we catch more than the market wants at any given time and have to preserve the catch so it can be sold later, our catch is worth less — often much less – simply because it is frozen. Plus, we have to either carry the unsold inventory at considerable expense or sell the products at a discount to someone willing to hold the inventory, so we lose even more value.

Because of our geographic location, we have a very substantial opportunity to sell fresh products in the Northeastern United States and Eastern Canada, where there are large concentrations of population.

It is an advantage we have over other suppliers we compete with in those markets. We already sell live lobsters and mussels, as well as fresh salmon, into those markets in significant quantities, so we know it can be done.

If we were inclined to do so, we could sell a lot more products fresh and increase our output value. But that cannot be done when our catches are taken in large quantities during a very short season. By doing that, we give up our main competitive advantage and we lose a lot of value.

Weak competitiveness and lost value have a big impact on industry viability. When we take less than we could get for our products from the market, we still have to find a way to make ends meet. That generally means harvesters get lower prices for their catches, plant workers are paid lower wages, and owners of vessels and plants earn lower returns on investment.

These problems have been well documented in various reports about the fishery in Atlantic Canada. 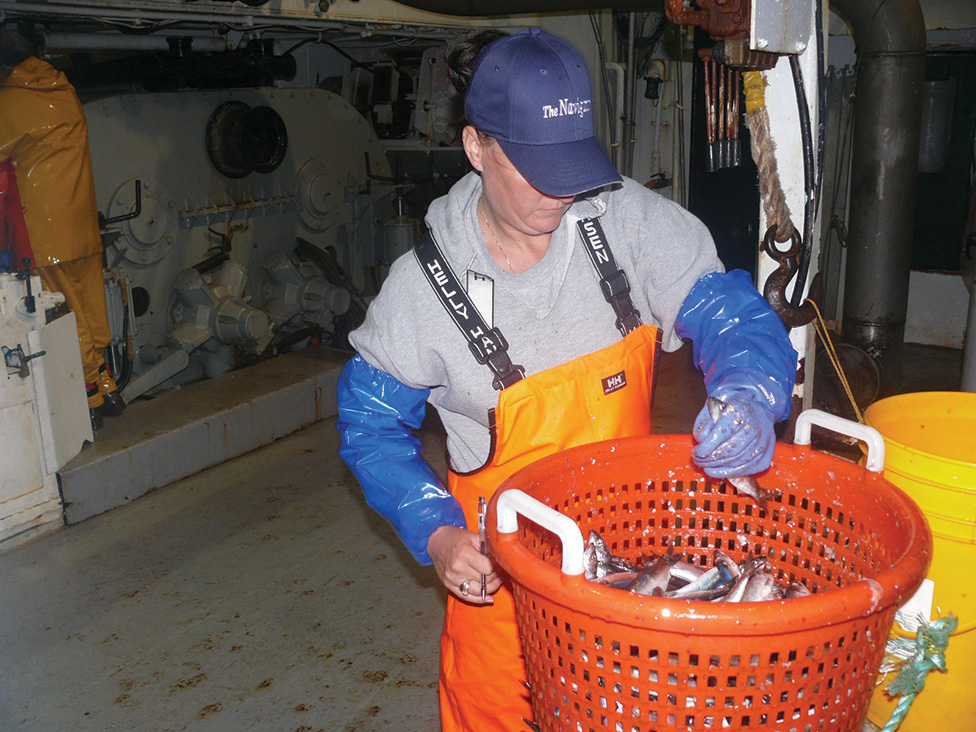 The Kirby Task Force talked about them in its report published in 1982. Gardner Pinfold discussed them in its review of the lobster sector in 2010.

In the so-called MOU report published in Newfoundland in 2011, Deloitte said, “between one-third and two-thirds of the fish harvesting operations currently operating in N.L. are viable, depending on the viability measure employed.”

In December 2015, I attended a presentation on the state of the Canadian fishing industry by Agriculture and Agri-Food Canada.

One of the key observations was that “landed volumes for commercial fisheries have fallen by 25 per cent over 10 years,” from 2003 to 2013. Another was that value-added per hour worked in the processing sector was about $45 in 2012, compared with $85 in Canada’s food industry overall. And a third was that the return on capital invested in the fish processing sector was about 2.5 per cent in 2012 — less than the cost of a bank loan and not nearly enough to compensate for the risks investors must take.

As the foregoing illustrates, our industry performs poorly on every measure of competitiveness. Because of these poor levels of performance, many investors, vessels, plants and people have left the industry. More will leave as aging baby boomers retire.

It will not be possible to replace them, because younger people are not attracted to an industry with short operating seasons, low incomes, and poor returns on investment. Already many operators of vessels and plants have a significant problem recruiting people to work with them and the problem is likely to get worse.

On the other hand, we could recruit people to work in the industry, if incomes, working conditions, and returns on investment were more competitive with the alternatives. Those are the things luring young people to those alternatives now. But offering such enticements depends on increasing the amount of money flowing through the industry. That can be done only by improving our competitiveness in the markets we serve, so we can get higher prices for our products.

As our resource base continues to change in response to global warming and climate change, we will need to invest in new harvesting and processing capabilities.

As many of our higher-priced shellfish species decrease in abundance and lower-priced species, such as cod and other groundfish, increase, where will the capital and people come from to redevelop the industry? This is something we need to give serious thought to.

In thinking about the industry’s future, our history of competitive weakness does not provide much worthwhile guidance for what needs to be done.
Socrates, the ancient Greek considered to be one of the founders of Western philosophy, once said, “The secret of change is to focus all of your energy not on fighting the old, but on building the new.” That seems like good advice for what we need to do.

No Replies to "Competitiveness — Part III"