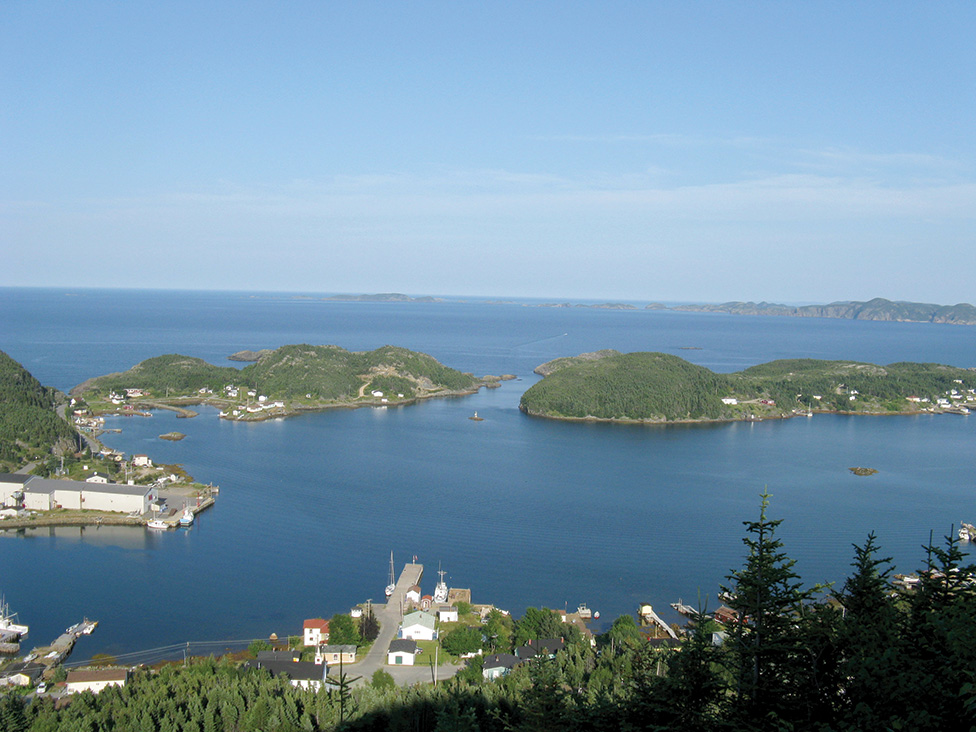 The community of Little Bay Islands is situated in the mouth of Little Bay, in the part of Notre Dame Bay known as Green Bay.

Green Bay is named because the hills are green with trees to the water’s edge.

Little Bay Islands is made up of two islands, with a beautiful harbour with two narrow entrances, very sheltered from the winds and seas.

In 1891, the population was 316, by 1935 it had grown to 560 and stayed around that figure until 1960, quite a population for that time. It was 100 per cent dependant on the fishery, populated because of its location to the fishing grounds.

There were two main fishing businesses. One was Strong’s, which was reported at one time to own 40 schooners, which were used to ply the fishing grounds up around the Northern Peninsula and Belle Isle in the Straits and all the way up the Labrador Coast. These were called floaters where people lived on them all summer and the catch of cod was salted in the hold.

This was necessary because as the population grew, especially in Notre Dame Bay, there wasn’t enough cod for everyone to make a living close to home. The Strong’s not only provided employment to the people of Little Bay Islands, but to people from the surrounding communities. The company also supplied salt and other supplies and bought dried cod from people in many communities. This salt cod would be packaged and shipped all over the world in their own schooners.

The second business in Little Bay Islands was S.T. Jones & Sons, but on a smaller scale.

I was born in the community of Lushes Bight, three nautical miles from Little Bay Islands. I was raised by a widowed mother and grandparents. My grandfather, Edgar Rice, spent a large part of his years fishing on a room (summer fishing) community called Lance au Pigeon on Quirpon Island. This community was well illustrated by Earl Pilgrim in the book The Curse of the Red Cross Ring.

In 1952, grandfather stayed home in Lushes Bight and me and him fished from home. I remember my trip to S.T. Jones in Little Bay Islands to pick up supplies for the summer — salt, oil skins for me (waterproof clothes) and a drum of gas for the four-horsepower Atlantic motor. The drum cost much more than the gas.

In the fall when the fish was caught and dried, we took it to S.T. Jones to sell and pay our accounts. Number one hard dried cod was $12 per quintal (112 lbs), some as low as $2.50 a quintal. It was considered a good summer.

In the late 40s and 50s, salt cod markets started to decline, that was the beginning of the end for the Strong’s family business.

Next year, on the invitation of my uncle Wilfred, who had an electrical business in Deer Lake, asked me to come work for him in the summer (I was still in school). I went to Deer Lake. I tell everyone I went to Deer Lake to get enough money to buy a boat, but I was there for 23 years.

In 1976, I finally had enough money, but only for a used one. I moved to Brighton in the fall of 1976 with a 60-foot longliner, that I named after my first grandchild, the Nancy Bartlett and that fall I made a trip to Little Bay Islands to get fuel and greenheart (ice sheathing) from S.T. Jones & Sons.

Quite a difference in 23 years as the population had dropped to 422.

The salt fish trade had changed to fresh fish sold to plants who would process the fish and freeze it for markets. While there was still a good market for salt fish, it mostly came from places where there were no fresh fish plants and mostly up the Labrador Coast. With fresh fish, fishermen could get paid on a weekly basis.

The Strongs had quit the business and moved away, but the Jones’ business had expanded from the salt fish business to a crab plant where it was canning crab, one of the first in the province I believe. Besides crab, it was purchasing cod livers to be canned (cod britches), to be pickled and also purchased seal meat for canning This plant provided an outlet for fishermen to sell their products and provided a lot of work in the plant, not only for the people of Little Bay Islands but also for many people from other communities.

In 1952, the main fishery, cod, was caught by handlines, trawls, jiggers and cod traps. When I returned 23 years later, the fishery was speed boats with outboard motors for shoal water and a large longliner fleet for deep water, fishing cod by gillnet and a new fishery had emerged involving turbot and flounder.

Everything was going well — tens of thousands of Newfoundlanders and Labradorians earning a living from the ocean. That was until the foreigners discovered the huge bodies of cod that concentrated on the Hamilton Banks off Labrador to spawn each year and was protected by the ice.

The ice-strengthened foreign vessels decimated this stock that supplied all the Labrador and Newfoundland northeast coast for a distance of 800 nautical miles.

After the cod got scarce, the governments of both Canada and N.L. finally woke up and created the 200-mile limit. They drove the foreigners out and ice strengthened our offshore fleet with our own tax dollars to go out to do the same thing. We did not learn a thing, while the cod did improve somewhat after the 200-mile limit, we still kept hammering away at the stocks.

Most of the cod caught by the offshore trawlers was harvested when the cod gathered together each year on the Hamilton Banks and Grand Banks to spawn — these fish never got a chance to reproduce.

Despite cries of alarm from the fishermen, the politicians ignored them. When the offshore draggers went out in the winter of 1992 and came back empty, the politicians finally woke up, but by then it was too late.

By the time you read this, the last ferry has left Little Bay Islands, 28 years after the moratorium. What was once a large vibrant community where people made a good living, is reduced to two residents, Mike and Georgina Parsons, who are left to survive on their own, much as their parents and grandparents did in my time growing up in Lushes Bight. All because the people we elected to look after our natural renewable resources let us down big time.

After the cod moratorium in 1992, Harbour Deep was the first to go. Little Bay Islands the latest. Who will be next?

There will be many more all because what was once our biggest employer, the fishery, has been ignored and still is by our politicians both provincially and federally and today a lot of fish off our shores is going to others that do not live in this province.

Strength of Frozen Lobster Means We Survive the Summer

No Replies to "Death by 1,000 Cuts: The Rise and Fall of Little Bay Islands"