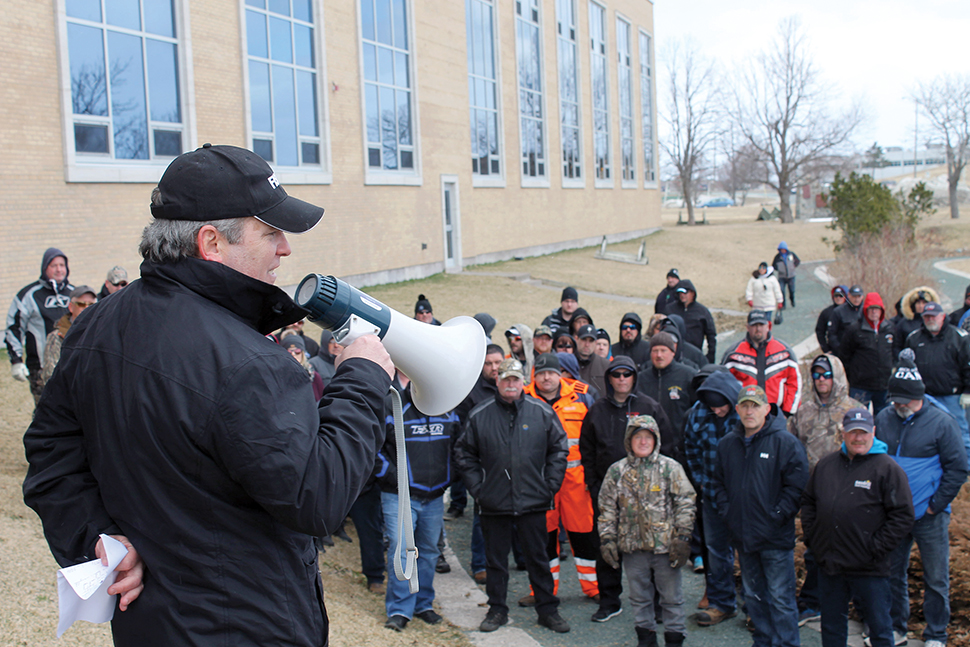 No Decisions from Aug. 20 Labour Relations Board Hearing

The Federation of Independent Sea Harvesters of Newfoundland and Labrador (FISH-NL) is remaining positive that its mission to represent inshore fish harvesters in the province is still alive and well.

On August 20, the Labour Relations Board held a hearing in St. John’s to determine the definition of an inshore harvester and FISH-NL said it is encouraged that the Board has agreed to consider its arguments to proceed with an immediate vote for inshore harvesters to decide their union fate.

The Labour Relations Board stated that “The issue to be decided at the hearing will be which fishers should be included in the unit for the purpose of the Board deciding whether a certification vote should be held.”

“We are confident harvesters will get the vote they’ve been waiting almost 21 months for once the Board considers all evidence,” says Ryan Cleary, President of FISH-NL.

“A vote is the only way to determine the true wishes of inshore harvesters.”

Prior to the hearing, FISH-NL had also requested that once the definition was dealt with, the Board should order an immediate vote based on extreme intimidation by the FFAW-Unifor, the unacceptable delay in dealing with the application for certification, and the right of harvesters under the Charter of Rights and Freedoms to choose their union representation.

The Labour Relations Board refused to deal with that specific request at the hearing, but later issued an order for FISH-NL to provide a written submission.

“The Labour Relations Board could be in a position to finally rule on FISH-NL’s application for certification after Sept. 12,” Cleary said.

On April 20 of this year, after a wait of nearly 16 months, the Labour Relations Board finally released a much-anticipated report into the quest of FISH-NL to trigger a certification vote with the aim of representing inshore fish harvesters.

However, the report’s findings might not have been the result FISH-NL was hoping for.

Submitted to the Labour Relations Board on Dec. 30, 2016, FISH-NL’s application for certification included membership cards signed by 2,372 inshore harvesters, collected over a two-month certification drive from more than 300 communities around Newfoundland and Labrador. The upstart labour group needed to sign up 40 per cent of the province’s inshore fishermen to trigger a vote away from the rival Fish, Food and Allied Workers union (FFAW).

Throughout the entire process, the FFAW maintained that its membership list contained around 10,000 harvesters and that FISH-NL never did sign up enough fishermen to trigger a vote.

During the August 20 hearing, FISH-NL lawyer David Goodland said his organizations wanted the labour board to define a full-time inshore fisherman in the province as it is meant to be in the legislation.

“The legislation is meant to protect fishermen who fish for a living, a full-time commercial enterprise,” he said.

“People who are fishing recreationally on commercial boats who have a fleeting interest in the fishery financially aren’t the ones who are meant to determine the fate and the future of the true inshore fishers in the province. It’s that simple.”

The list of commercial inshore fishermen used by the FFAW, Goodland said, has become a “mere dues-paying list.”

“You don’t have to have the connection — pursuant to the FFAW position — that we suggest the act requires and the labour board has to straighten it out,” he said. “(Labour Board) has to make sure the people who are going to control the terms in the industry, the working conditions, the pricing, those people are the ones who are in the industry for a living. The full-time fisher will control their fate, not somebody who has a fleeting connection to the fishery or someone who is land-based and who has dues paid on their behalf and cannot determine pricing and working conditions to fishers working on the vessels.”

“The data exists independently of us and it shows that about 9,500 people over 2015 and 2016 were engaged in fishing and that’s why we got dues and dues were deducted from their fishing effort,” Johnson said.

“The idea that there are 4,500 people in a bargaining unit in Newfoundland and Labrador — and by the way they put that number on the bargaining unit after they counted their cards and saw they only have 2,300 cards. So, in order to come before the board, they had to have a number that got them above the 50 per cent, and that came in at 52.7 per cent. Our number is one that existed before we even knew what FISH-NL was planning.”

No Replies to "Fate of FISH-NL Remains Uncertain"