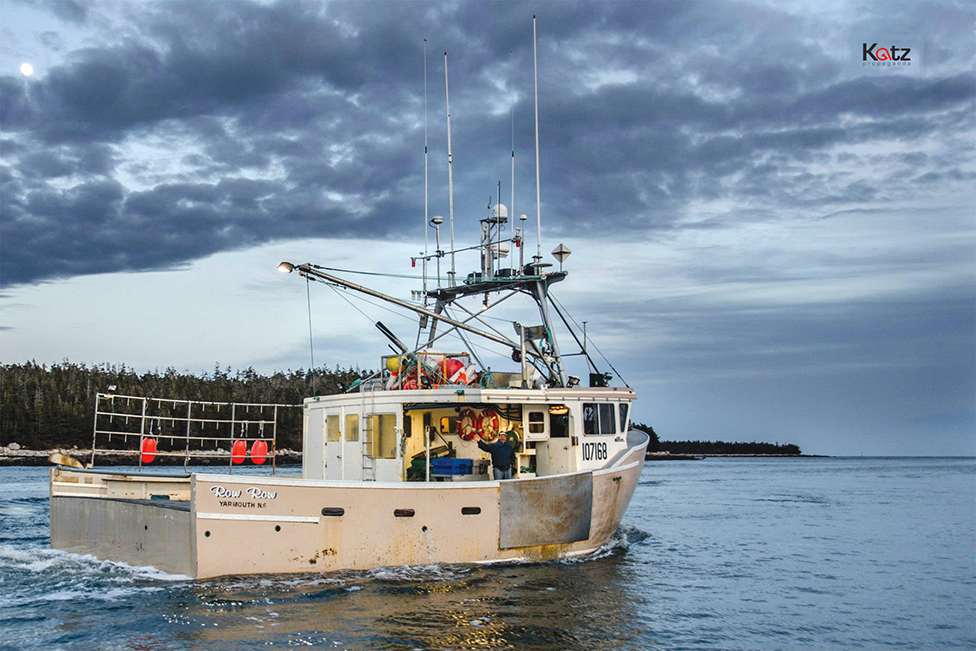 Foolish, Is What He Was

To some people, ‘foolish’ may sound like an odd way for 19-year-old Gilles LeBlanc to describe his best friend who is no longer with us, but in this case it is truly spoken as a term of endearment and spoken with huge affection.

The ‘foolish’ one was Michael (Mike) Doucette from Wedgeport, Nova Scotia, who was loved by everyone because of his crazy fun-loving pranks and his wild sense of humour that often translated into “acting the fool.” And, Gilles still smiles broadly when he talks about his larger-than-life neighbour and best friend.

Sadly though, Gilles lost his buddy. Mike fell overboard from the fishing vessel Row Row on the early evening of January 12, 2013. He was never seen again.

Saturday, January 12, 2013 was a lovely day in Southwest Nova Scotia — the kind of day that fishermen in the region call a ‘slicker’ — winds were light and seas were calm.

It was a fairly typical day for lobstermen who were about midway through their fall/winter lobster fishery. After working their traps all day, most boats were headed back to their various homeports with plans for arrival time just before, or not long after, dark. One of those boats was the Row Row, a 45-footer crewed by Captain Sandy d’Entremont along with two crewmen, Glenn Cottreau and 20-year old Mike Doucette. 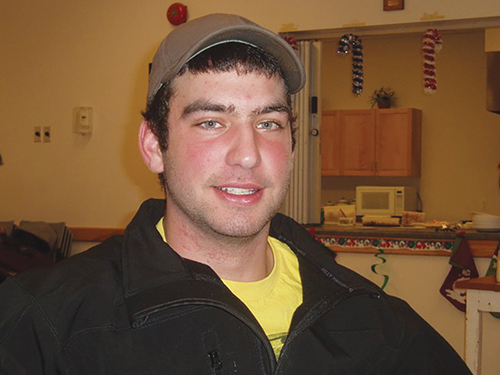 Sometime around 6 p.m., Mike mentioned that he was going below for a short nap while they steamed to port about two hours away.

About 45 minutes later Sandy asked Glenn if Mike was still asleep. Glenn checked the bunk but Mike was not there. Assuming Mike must have gone up to the deck, he checked there but still no sign of Mike. After a minute looking for their shipmate, the awful truth started to sink in. Mike was not on board.

At 6:47 p.m. Captain Sandy d’Entremont issued a mayday stating that he had a man overboard. All the skippers in the fleet and all other crewmen in the wheelhouses listened intently as Sandy described the missing man as about 200 pounds wearing a dark hoodie and blue jeans, adding that his missing crewman was not wearing life saving gear and he was not a swimmer.

The Sou’west Nova fishing fleet is largely a tightly knit group and dozens of those listening knew exactly who Sandy was talking about.

Gilles LeBlanc onboard the Midnight Prowler certainly did.

“We were only four miles from the wharf at Pinky’s Point and I looked at my buddy in the wheelhouse on our boat and I said; ‘it’s Michael.’”

In stunned silence, dozens of crews took a little time to digest what they had just heard but a few seconds later, approximately 30 vessels changed course and headed in the direction of the Row Row’s location.

Travis Lennox, captain of the Brittany and Madison was among that group. Travis and his crew were hauling back gear about 20 miles north of the Row Row when he heard Sandy’s mayday. Like Gilles, he too knew immediately who it was when he heard the description.

Travis went to school with Mike and they used to hang out together. They shared that kindred-spirit bonding that most young fishermen have as they learn to deal with the challenges of working in the most dangerous occupation on the continent.

Travis and his crew headed south immediately to assist in searching for Mike.

“We had an ebb tide and we were doing about nine knots so we would have been back there in a couple of hours,” he explains.

“We had only gone about five miles when we saw a plane drop two flares about 15 miles south of us. They dropped them 12 miles apart and I remember it lit everything up. By the time we arrived, the Coast Guard boats were already there as well and I was really impressed with how they organized the search so quickly,” he says.

It was difficult to calculate where they should search for the young man because as much as a half hour or more had lapsed before Mike was discovered missing; all the while, the Row Row was steaming at approximately eight or nine knots.

The Coast Guard captain in charge set up grid lines running in an east-west pattern and had all search boats form a line approximately 250 metres apart and steam for nearly an hour to the west and then turn around and steam east. Meanwhile, search planes overhead dropped more than a hundred flares that night in hopes of assisting the vessels. 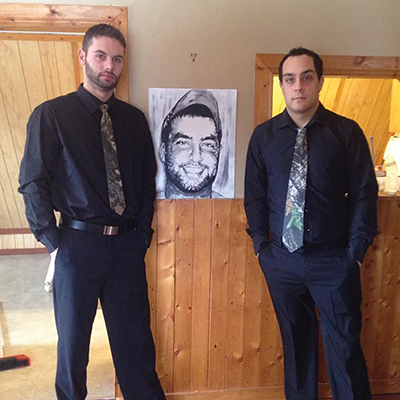 Travis Lennox and Dave Heroux stand alongside a drawing of their friend Mike Doucette as sketched by Luke MacKenzie.

“It was really well done and while we were hoping to find Mike alive, we knew the odds were not in his favour,” Travis Lennox laments.

“In fact, in a way we were all searching for something we didn’t want to find,” adding that despite logic, you still hold out hope for a miracle.

“We covered the (ocean) as good as we could,” Wedgeport fisherman Matthew Corporon said in a newspaper interview. “There’s not much else we could do. The hopes of us finding him were pretty slim.”

The search continued all night until 9 a.m. Saturday morning when the authorities decided it was no longer practical to continue any further. Several vessels, crewed by friends of Michael couldn’t bring themselves to quit and continued for another couple of hours even after the planes and Coast Guard ships had left the area. But it was to no avail.

The loss of his older buddy was devastating for Gilles LeBlanc. Mike was a couple of years older and having him around was like having a security guard and a court jester all in one.

“Mike always said he’d always have my back and then he’d make fun and blow me kisses for a big laugh,” Gilles says. “Foolish, is what he was,” Gilles chuckles.

In fact, there were times that Mike’s foolishness may have gotten Gilles and another good friend in a bit of trouble.

“Sometimes, he’d come over to our class in school and convince us to sneak off for the afternoon to go smeltin’ (smelt fishing) or something. To Mike, it was just part of enjoying life to the fullest.”

Despite his young years, Mike had lived a lot of life. Among other things, he was an accomplished hunter.

“He and his uncles, Kevin and Jeff Doucette, along with his cousin Matt used to hunt a lot. They would hunt deer, birds and moose and everything,” Gilles said.

Michael’s loss was profound and also somewhat ironic. His father, Abbé Jean, also a fisherman, drowned when Mike was a small child. His mom Charlene raised Mike on her own and he loved her dearly.

Gilles says Mike helped his mom as much as he could. His hunting was part of that as he would fill the freezer with food. He went fishing when he was in grade nine as another means to help his mom make ends meet. 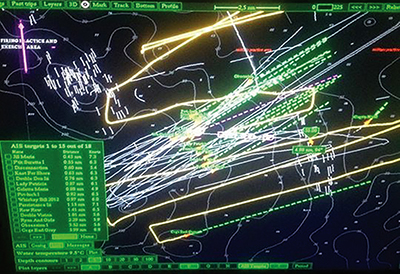 The Olex plotter display of the search grid for Mike Doucette from the wheelhouse of the Brittany and Madison on the night of January 12, 2013. Courtesy of Travis Lennox.

“There was no one who loved their mother as much as Michael loved his mom,” Gilles says.

An uncle, Charlene’s brother, described Mike’s affection and gratitude for his mom by saying “she was his pride and joy.”

We invited Charlene to chat with us about Michael but ironically and unknown to us at the time; she was once again dealing with yet another sad loss — her mom had recently passed away. She graciously thanked us and wished us well.

We can only speculate what happened to Michael Doucette on January 12, 2013. It was winter and cold so conventional wisdom would suggest he may have slipped on a piece of ice or a frozen rope and slid over the stern into the water.

The only thing for certain is that a funny, loveable, generous, hard-working and loving young fisherman was sadly lost to the sea on his final voyage.

Atlantic Charger Living up to Expectations

No Replies to "Foolish, Is What He Was"