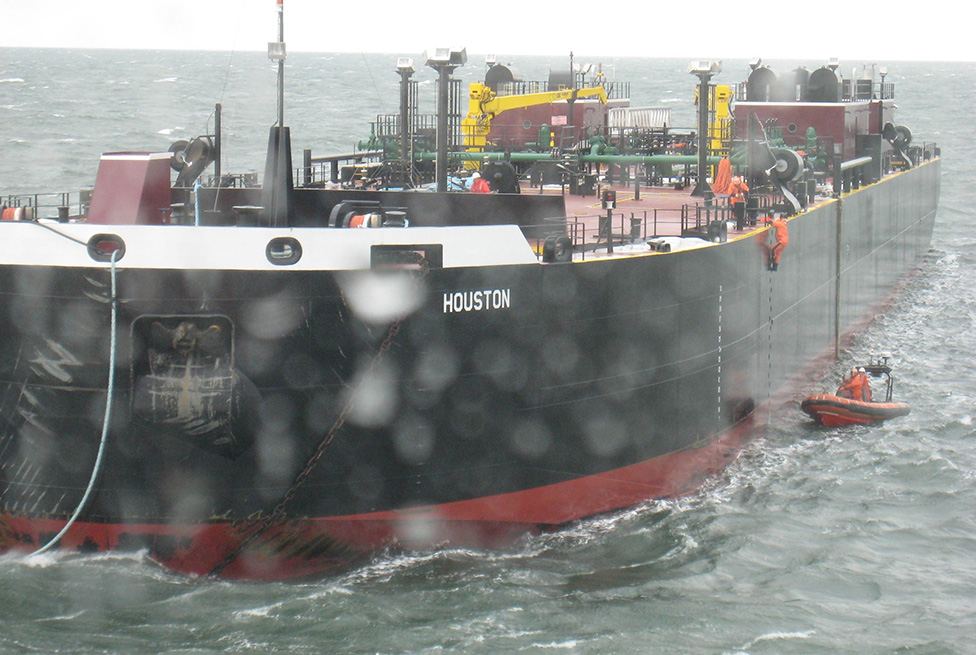 Houston, We Have a Problem – Part II

Last month, we told you about the U.S. barge Houston that was adrift in a bad storm near Port Hood, Cape Breton on December 17, 2007. The barge was not carrying cargo but did have approximately 9,000 gallons of fuel onboard and that was a huge environmental concern. If the Houston was pushed onto the rocky shores and punctured a hole in its hull, a fuel spill could be a catastrophe for marine life in the area. The Coast Guard ships Terry Fox and Edward Cornwallis were dispatched to the scene to attempt towing the tug out of harm’s way. But that was not going to be an easy task. This is Part II of “Houston, We Have a Problem”

After careful assessment of what was required to get men on the deck of the stricken barge, five men from the Edward Cornwallis boarded a fast rescue craft (FRC) at 11 a.m., Monday, December 17.

Three men would attempt to scale up the 25 feet of the steel hull on the leeward side while Chief Officer Byron Samson and seaman Anthony Kelly remained onboard the FRC in case one or more of the climbers fell and needed assistance.

The boarding team was under the direction of senior engineer John Seymour and included seaman/rescue specialist Peter Cowan and seaman Paul York.

Managing the transfer of three men from the lightweight FRC to the side of the barge required precision timing for the operators of the zodiac and especially for the men who had to jump to the side of the ship. The only place to get footing was in one of the “pigeon holes,” a series of perforated round holes drilled into the side of the hull for the purpose of scaling up the side.

The holes were large enough to comfortably fit an average size boot and that would be easy if the vessel was sitting perfectly steady, but getting the toe of a boot secured firmly placed inside the hole when jumping from a moving boat in a heavy sea while at the same time reaching inside a higher hole to grab a bar across the opening deep inside took some precision timing indeed.

“I remember later, after we were on the deck, the barge rolling rail in-rail out; it was that bad,” says Peter Cowan.

“It was kind of like ‘one, two, three — jump’” explains Cowan, adding that once clinging to the side of the steel barge the next thing was to scramble to the top as quickly as possible to avoid getting pinned between the rolling barge and the FRC. The boarding team successfully conquered the challenge and all three were on the deck of the Houston by approximately 11:15 a.m.

Once onboard, John Seymour, Peter Cowan and Paul York assessed the condition of the barge from the deck and then tried to determine if the ship could be taken under tow.

“We gathered all the lines we could find to use as a messenger line to attach to the barge’s emergency tow line/rope which was located on the starboard side of the vessel,” says Cowan.

Meanwhile, as the men worked on the deck of the Houston, the tug Eileen M Roehrig arrived on the scene at about noon. Apparently, the tug’s captain indicated he wanted the Coast Guard crew to get the towline to his vessel instead of the Terry Fox. That didn’t sit well with the Coast Guard officers in charge of the operation because it was simply too dangerous in deteriorating weather and sea conditions.

The tug captain was informed that Transport Canada had placed restrictions on the Houston and was told firmly to back off and head back to port.

The tug’s crew obeyed and eventually backed off, but remained in the distance monitoring the situation for some time before deciding to head back to port in Canso.

For more than an hour, attempts were made to pay the messenger line from the FRC to the Terry Fox, but high winds and heavy seas made the operation impossible. At 1:15 p.m., the commanding officer ordered that any further attempts were too dangerous and curtailed the activity.

It was time for plan B.

With the Houston still advancing toward Henry Island and Port Hood at an alarming rate, plan B needed to be executed quickly. Time was running out.

The team decided to drop the Houston’s anchor in the hope the vessel would stop drifting, or at least slowed enough to hold the ship at sea until the storm abated.

But dropping the anchor didn’t go smoothly either. After releasing the brake the anchor stubbornly clung to its pocket and would not let go. John Seymour found a large piece of wood and banged the anchor and chain with all his strength and finally the anchor fell and the Coast Guard men secured the ship in 150 feet of water.

“We got it just in the nick of time too,” says Peter Cowan. The ship was only half a mile from Henry Island and potential environmental calamity.

Although the big barge seemed to have been secured by the anchor and temporarily out of harm’s way, storm conditions had worsened so badly that Seymour, York and Cowan could not scale down the side of the still heaving barge and onto the FRC because it was too dangerous. Meanwhile, the FRC crew, Kelly and Samson, were ordered back to their ship where they recovered after some tricky maneuvering. The two men were extremely cold and wet after three hours battling the wind, waves and snow.

The other three were not so lucky.

They were on the deck of the Houston without water, food or heat. For a while they huddled in the dark inside a structure described by Peter Cowan as a “sort-of control room” near the stern of the barge. It provided enough shelter to stave off hypothermia until engineer John Seymour managed to get a small generator started giving the men much welcomed light and access to a VHF Radio to communicate with their senior officers. 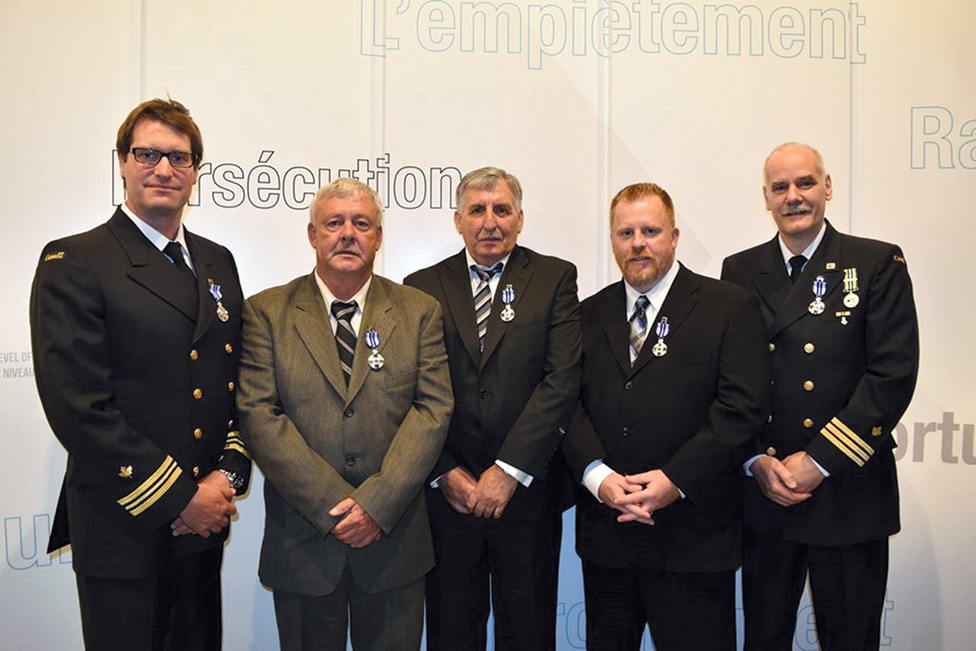 Although dry, the three were tired and cold. The steel barge was not an ideal place to spend a December night in stormy weather, even though their Coast Guard ship was standing by providing as much shelter as it could to keep the Houston from the worst of the elements.

Late in the afternoon, someone decided to get them out of there. At 5:40 p.m., a rescue helicopter arrived on the scene. Winds were still between 40-50 knots (75-92 kilometers) per hour and as John Seymour described it, “This guy came out of the sky, put a horse collar on me, put his arms around me and the next thing I know, I was in the helicopter — safe and sound.”

Seymour, Cowan and York were flown to Canadian Forces Base (CFB) Greenwood where they spent the night.

Winds and seas diminished somewhat overnight and on Tuesday morning, December 18, the three men were flown back to the Edward Cornwallis.

The Houston had dragged the anchor overnight, but was still in relatively deep water, but now closer to the rocky shoreline thus causing a greater urgency to get the barge out of there.

The tug Eileen M Roehrig arrived on scene at 11 a.m. and it was decided to make another attempt to get the barge under tow, this time they would try to get a line to the tug.

Byron Samson, Anthony Kelly and Paul York boarded the FRC and worked with the crew of the American tug to get the job done.

Although conditions had improved it was still “sloppy” and difficult to deal with.

The FRC crew attempted three times to shackle a heavy hawser into the towline so it could be recovered and disconnected. Finally, on the third attempt while under the flare of the bow of the barge, a dangerous place to be in those conditions, it worked. The old towline was disconnected and replaced with a new one from the tug.

Thanks to the outstanding courage and bravery of the five crewmen from the Edward Cornwallis at 3:30 p.m., the Houston was once again under tow and at sea enroute to the Gulf of Mexico.

On July 2016, nearly eight years after the incident, Governor-General David Johnston presented John Seymour, Peter Cowan, Paul York, Anthony Kelly and Byron Samson with medals for meritorious service. The award is bestowed on those “who have performed an exceptional deed or activity that brings honour to Canada.”

No Replies to "Houston, We Have a Problem - Part II"