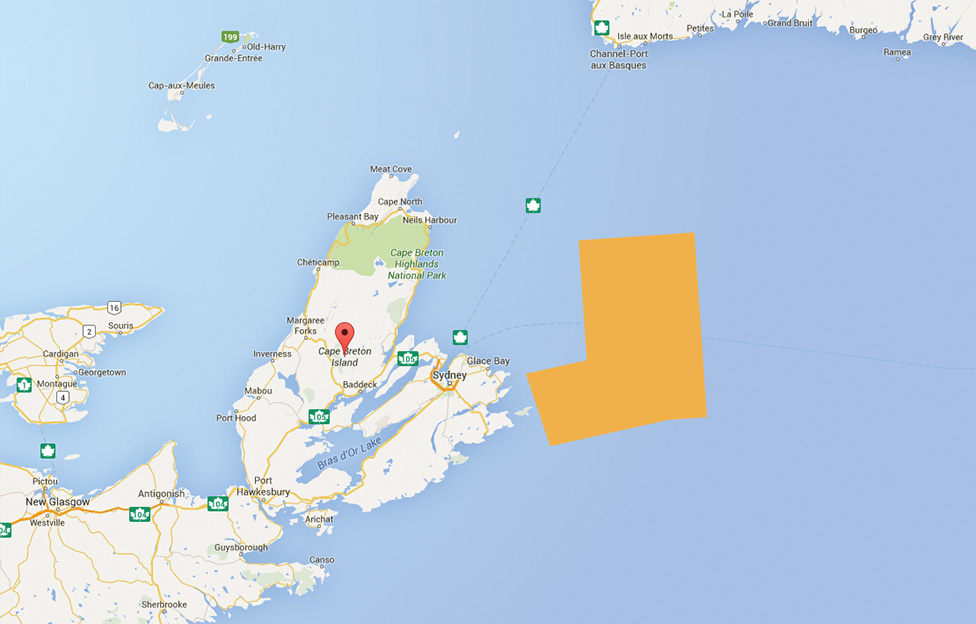 Pictured above: Location of Ann’s Bank off Cape Breton

Every coastal community in Atlantic Canada has seen the brain and brawn drain of our younger generation in the past decade or so, brought on by the lack of economic opportunities down here compared to the streets of gold in the Alberta oil patch.

How things have changed.

We now have an exodus of our young people returning to the fatherland due to the collapse of the oil and gas industry — due in large part to the actions of the Saudi Arabians in preventing the U.S. gas sector from completely eliminating imports from the Persian Gulf due to huge deposits of gas via the fracking procedure.

The Saudis are doing this by dumping massive amount of oil on the global market which is depressing gas prices to the point that many operations in Canada and the United States are economically unfeasible and thus the loss of jobs and the return of the natives to our shores.

With the return of this younger work force, pressure is mounting to find jobs, thus the attraction of mega-projects like oil and gas activities off the Nova Scotia coastline.

Drilling will take place this year off The Gully, a marine protected area a few hundred kilometres east of Halifax and permits have been issued for oil and gas exploration rights a few sniffs away from Georges Bank.

The only outcry about these projects has come from the fishing and environmental sectors, the former seeing a billion-dollar industry threatened.

But as I’ve learned through the years, most Nova Scotians feel the fishery is a dead issue, so what’s the problem?

And the federal government isn’t helping the issue one bit. A few years back, it re-drafted the Fisheries Act. One clause stated that the oceans under our control have to be shared by various sectors i.e. fishing, recreation, pleasure crafts, and oil and gas industry.

Recently much was made about the St. Ann’s Bank off Cape Breton becoming the province’s newest marine protected area. It covers 4,400-square kilometres and is home to many at-risk species.

Fine and dandy. It needs protection.

But everyone has to be accommodated — so what we have here and in The Gully is a marine refuge on paper and that’s about that. In order to get the refuge status, a lot of compromise had to take place so that the needs of private industry had to be considered.

In other words, if oil and gas is discovered at the periphery of St. Ann’s Bank, it probably would be allowed to be exploited.

This is why the federal government has been deathly silent on the Georges Bank drilling permit issue. It still has to conduct environmental studies and as far as I can see I doubt this project will see the light of day due to the politics of the unique fishing bank and its impact on the New England and Nova Scotian fishing and tourism industries.

Georges Bank is owned both by Canada and the United States. At present there is a moratorium on exploration for fossil fuel on the bank, both here and in the U.S., but the latest permit is only a few miles from the eastern side of the bank.

The oil and gas ploy is a bit iffy. But there’s bound to be another mega-project in the wings.

I remember, about a year ago, reading about a plan to erect hundreds of wind turbines off the New England coastline to provide clean energy to that region.

At the time there was opposition from fishing groups who feared the loss of valuable fishing grounds and I think the project petered out — until a few weeks ago when it re-emerged here in Nova Scotia.

Beothuk Energy Inc. of St. John’s, N.L. recently announced its intention of erecting a 120-turbine wind farm at a cost of $4-billion about 20 kilometres from the Shelburne County coastline.

A 200-mile long sub-sea cable will bring the energy to the Boston area.

We’ve been pumping natural gas from the Sable Island area for decades, but so far this part of Nova Scotia hasn’t seen a whiff of it. New England has as most of it is shipped there, bypassing most of Nova Scotia.

While the province has received and is receiving tax dollars from the sale, the typical Nova Scotian hasn’t seen any benefit from this relatively cheap — especially now — fuel source.

And now the western end of the province could see 120 turbines a few kilometres from their shores pumping out power to, again, the Boston area. Didn’t read a thing about maybe running a cable to our shores so we could take part in the energy feast.

A quick peek at where these turbines will be erected could raise the ire of local fishermen. It’s right in the middle of the most productive lobster fishing area in Canada. It could also include Area 51, where inshore scallopers have raked quite a few dollar bills since they were allowed in there by Ottawa over the objections of the lobster fishing sector.

And here’s another point to ponder. Nova Scotia is investing mega-bucks in the Muskrat Falls hydro project as we will be getting some of the electricity as it winds its way to, again, New England, from Labrador.

Wouldn’t this wind farm idea and it’s only an idea, impact negatively on the Muskrat Fall project of which we are a partner?

Meanwhile in my bailiwick it’s very hard to find a plumber, electrician, carpenter or brick layer. There are opportunities for work in our coastal areas but they don’t all have to hinge on mega projects.