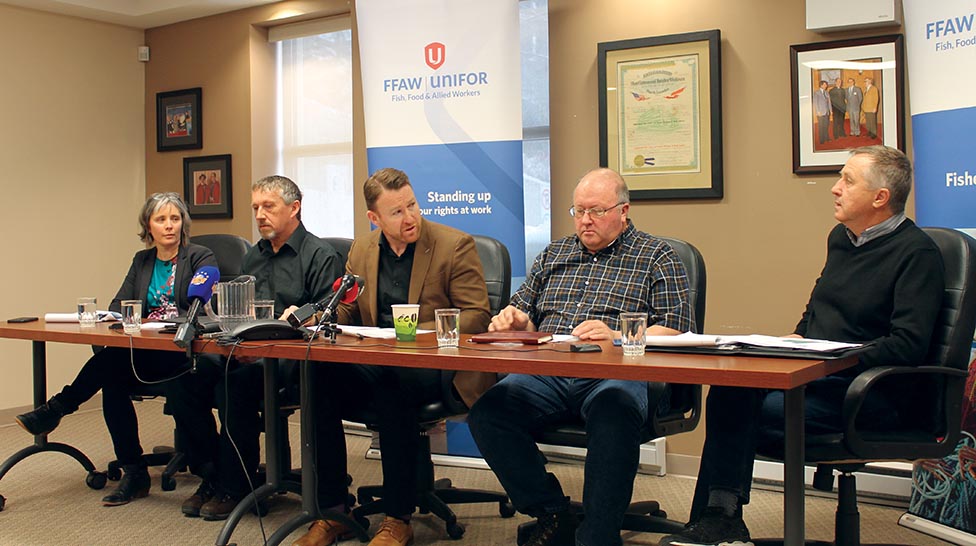 N.L. Snow Crab Stocks Appear to be Holding Their Own

Above: FFAW officials met with the media to discuss the 2019 snow crab assessment.

After reporting years of diminishing snow crab stocks, scientists at the Department of Fisheries and Oceans (DFO) are reporting a somewhat brighter picture for the second year in a row.

At its 2019 annual snow crab technical meeting, DFO said the fishable biomass off Newfoundland (NAFO areas 2HJ3KLNOP4R) continues to be at a seriously low level, but has shown some small signs of improvement. DFO also reported this trend in last year’s assessment, bucking a trend that demonstrated declines each year for about the last decade.

But a recent ocean water cooling trend might be helping crab stocks level off.

Krista Baker, DFO stock assessment biologist, explained that snow crab are most common in waters below 2°C. The return to cooler conditions in most major snow crab divisions in recent years is positive for the stock.

2HJ: Both the exploitable biomass and recruitment indices have changed little during the past 15 years. Surveys suggest recruitment will be unchanged in 2019.

3K: Despite localized improvements, the exploitable biomass and recruitment indices have remained near time-series lows for the past five years.

3L inshore: Exploitable biomass is severely depleted. The exploitable biomass index remained near a time-series low in 2018. Recruitment steadily declined to a time-series low in 2017 and in 2018 remained near the lowest levels. Localized improvements in biomass available to the fishery in crab management areas could occur within the next two years.

3LNO offshore: The exploitable biomass and recruitment indices showed a modest increase in 2018, but remains low.

Given the 2018 quota cuts, there is still much concern over the forthcoming 2019 TAC.

In the wake of the 2018 positive news that the fishable snow crab biomass off Newfoundland (NAFO areas 2HJ3KLNOP4R) had shown some small signs of improvement and should have been on par with 2016 stock numbers, many were surprised when it was announced the overall 2018 quota would be cut by 17 per cent.

DFO reduced the snow crab TAC for Newfoundland and Labrador Region in 2018 to 28,975 tonnes, an overall quota level decrease of approximately 17 per cent from 2017.

The union representing snow crab harvesters in the province was upset following the report on stocks — not because of the numbers, but for another reason.

In a press release, the FFAW-Unifor stated “Inshore snow crab harvesters are deeply disappointed in today’s stock assessment briefing for snow crab where the Department of Fisheries and Oceans (DFO) included an incomplete, proposed precautionary approach (PA) limit in the stock assessment.”

“The precautionary approach framework is a proposal only and yet it’s had significant bearing on the discussions for the snow crab assessment. Even though DFO had assured harvesters there will be no impact on management decisions for 2019, it’s disappointing to see the proposed PA inserted into the assessment,” said Calvin Young, crab committee chair for 3Ps.

While DFO resource management has assured FFAW-Unifor that the incomplete PA will not be considered in management decisions for the 2019 snow crab fishery, including it in this year’s assessment underscores DFO’s lack of respect for fish harvesters and their contributions to fisheries science, the union explained.

“We’ve been very clear throughout this process that harvesters need to be engaged from the start as partners in order to exchange knowledge and truly build a sustainable snow crab fishery,” says Trevor Jones, crab committee chair for Green Bay.

The FFAW-Unifor said it has repeatedly expressed concerns over DFO’s approach to raising issues at meetings simply to tick a box for consultation without engaging in vigorous discussion over important issues. The Union is committed to participating in DFO’s working group for the Limit Reference Point and has committed to ensuring harvesters voices are not ignored when it comes to both science and management decisions.

“Fish harvesters in our province support a sustainable fishery and sound science-based fisheries management, but DFO has ignored unanimous industry disapproval of including the proposed precautionary approach in this year’s stock assessment update,” says Tony Doyle, vice-president of FFAW-Unifor and crab committee chair for Conception Bay.

Union staff and scientists will be holding consultations with all fleet committees around the province before the start of the spring fishery in order to bring harvester input to the table at DFO’s working group for the precautionary approach framework.

“We are confident that if DFO commits to working with harvesters as valued contributors to knowledge about the snow crab stock, we will be able to find common ground and move forward with a new PA framework,” says FFAW-Unifor secretary-treasurer David Decker.

No Replies to "N.L. Snow Crab Stocks Appear to be Holding Their Own"