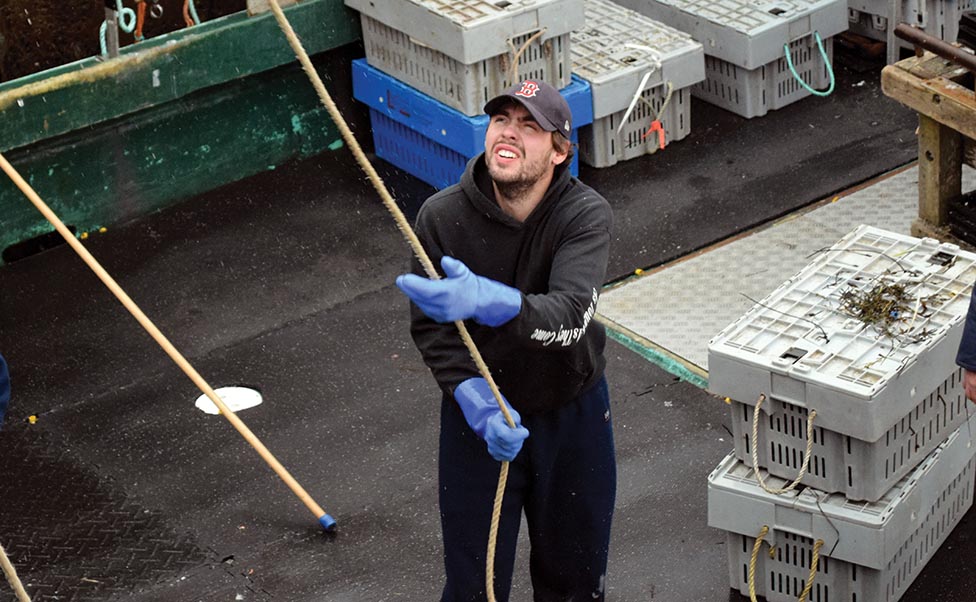 Night and Day Difference Between Lobster Fishing in P.E.I. and S.W. Nova Scotia

In Murray Harbour, Prince Edward Island, Jesse Bell is captain of his own 43-foot wooden lobster fishing boat, How Boat That.

However, for a few months for the past four winters, he has found himself back aft on lobster boats in southwestern Nova Scotia, working in a fishery that is as different as “night and day” as the one back home in P.E.I.

Like many Maritimers, Bell grew up in a fishing family, spending a day here and there out fishing with his father. By the time he was 14 or so, he was spending “full summers at it.” He bought his vessel and gear five years ago.

Fishing in LFA 26a where the season runs from April 30 to June 30, “We fish mostly all six-trap trawls, but there is a little sub-district in 26a where they fish single gear,” said Bell. The traps are wooden for the most part and the water depth on the fishing grounds can range from five to 70 feet.

With not much going on fishing-wise in P.E.I. during the winter months, Bell decided to take a trip to southwestern Nova Scotia not long after buying his boat, to scout out employment prospects in the winter lobster fishery.

“I had heard tell of different people coming down here, so I thought why not? There’s absolutely nothing going on home as far as fishing goes,” said Bell. “I called quite a few people and asked them if they wanted to come down. They thought I was crazy, but my buddy Jordan, he took me up on it. I told him we’d go down, look for jobs and if nothing else we’ll look at the boats and the different fisheries, do the tour and came back home.”

The two showed up the day after dumping day in LFA 34. “We both had jobs within four or five hours” as crew on fishing boats, said Bell. It was to be a learning experience.

“I found a night and day difference from home. I found everything was completely different, from how we fish the gear to how the gear is set back. The only thing I knew how to do from back home was how to band lobsters,” he said. “As far as fishing the gear is concerned, I had to relearn everything right from the start again.”

In P.E.I., the water depths are shallow and there’s hardly any tides. “There’s only a few places around P.E.I. known to have strong tides, but those places wouldn’t even compare to half of what it is off here,” said Bell.

“We don’t anchor our trawls either.” Just a little bit of concrete to the bottom of the trap and “our gear doesn’t wiggle. We don’t have snarls coming up. I can set my gear in 30-foot of water, have a 40-knot nor’easter come through and the traps will still be there.”

In southwestern Nova Scotia, the sea conditions are harsher, the trawls are longer, the traps are wire and gear is set by shooting it out over an open stern by most boats.

“Our boats are closed stern,” said Bell. “We just slide our traps down the washboard or push them right off the side,” adding he’s “starting to see the odd boat now here and there with open sterns” in P.E.I., but considering they only fish six-trap trawls, it’s not really a significant way to set gear, like it is in southwestern Nova Scotia, said Bell.

“It’s a lot better way for the harder weather down here. The seas swell up a lot more here than in the Northumberland Straight” which is usually “just a short little chop.”

Bell usually stays in southwestern Nova Scotia for the month of December, working on the deck of a lobster boat, but had the opportunity to work into January this year so he took it.

“It’s great employment for a time of year when its hard to find work in general. It’s good money for the holidays.”

There’s also been payoff in knowledge, said Bell. “I’ve learned more with my skippers over here and that has helped me out quite a bit. I was quite young when I first came over, so it was good seeing how things were done differently and what could apply back at home.”

One of the things going home with Bell this year is 100 more wire traps. “The general idea back home is that wire doesn’t fish but I’m going to try them anyway,” he said. “I took 60 last year from here of different styles. I had some that fished as good as my wood gear and some that you would starve to death fishing and some that were my best gear so it’s hard to tell really.”

No Replies to "Night and Day Difference Between Lobster Fishing in P.E.I. and S.W. Nova Scotia"