One of Canada’s longest-running, most successful commercial fishing shows returns to the Yarmouth Mariners Centre in two short months.

The Eastern Canadian Fisheries Exposition, held every two years in southwestern Nova Scotia, offers a comprehensive showcase of commercial marine products and services. The show is presented in partnership with the Navigator Magazine, the Voice of Atlantic Canada’s Fishing Industry.

“2018 has been an exceptionally successful year across our portfolio of commercial marine shows, and we’re looking forward for this trend to continue in Yarmouth,” said Show Manager, Shawn Murphy. “For the first time in nearly a decade, every square inch of the Mariners Centre is completely sold out. With ramped-up exhibit sales along with strong visitor pre-registration, we’re prepared for a record-setting event.”

This edition of the show will offer visitors a chance to see even more innovative products for the fisheries and marine industry and chat with companies from across the Maritimes, Canada and abroad. At its last edition in 2017, attendance numbers soared to 4,726 — the highest in more than a decade. Attendees include fish harvesters, fish processors, those involved in the workboat industry, search and rescue organizations and other professions in, on, or around the water.

Visitors are encouraged to pre-register to receive a show badge in advance, skip lines and save 50 per cent on admission.

The Eastern Canadian Fisheries Exposition is part of an array of marine trade events in Atlantic Canada produced by Master Promotions Ltd. in partnership with The Navigator. Other related events include the North Atlantic Fish and Workboat Show and Fish Canada Workboat Canada, held in St. John’s, N.L. and Moncton, N.B. respectively.

Again in 2019, deserving individuals who have made valuable contributions to the marine industry will be inducted into the Atlantic Canada Marine Industries Hall of Fame. Additionally, a networking reception will take place in conjunction with the show.

According to the U.S. Patent office, Clearwater Seafoods was granted a patent on November 12 for a vision system that identifies the molt stage of lobsters.

The system would replace blood protein analysis and other means of determining the overall quality and amount of meat in a live lobster.  The system is designed to be non-invasive and operate on a conveyor belt. 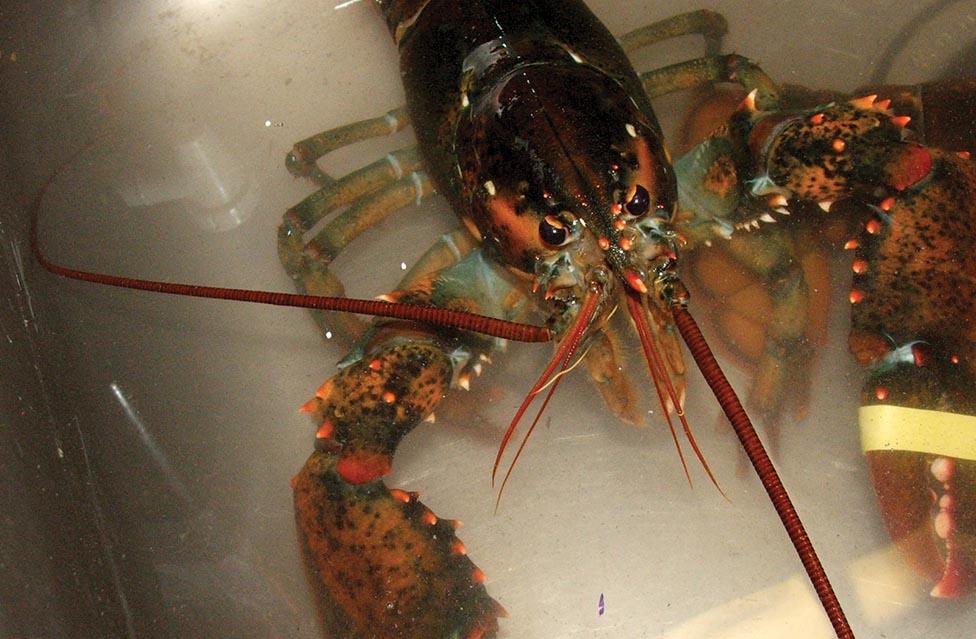 The lobsters could be sorted by size, molt condition and quality, based on the vision system.

According to the patent filing, the vision system consists of a camera that photographs the lobster using visible, infrared and ultraviolet light spectrums. By comparing the patterns established with these images, the software can make a determination as to the molt stage.

The uses would be to automate some of the process in determining which lobsters are the highest quality to ship and separating out lower quality lobsters on a processing line.

The patent, which covers the camera system and the software that uses the images to predict molt stage, can also be used in monitoring incoming shipments, or even with a standalone application on a phone.

Ocean Choice International (OCI) recently entered into a marketing agreement with Qingdao Meichu Food Co. Ltd., a subsidiary of Winning Group, for the promotion of yellowtail flounder and grey sole into the Chinese retail and online markets.

The goal is also to add other seafood species as part of the agreement in the future such as redfish, snow crab, cold water shrimp and sea cucumber.

Meichu products are sold in approximately 1,600 Chinese retail stores. The company also has an e-commerce presence on T-Mall and JD.com. OCI markets its products around the world and this partnership will further enhance the company’s retail presence. 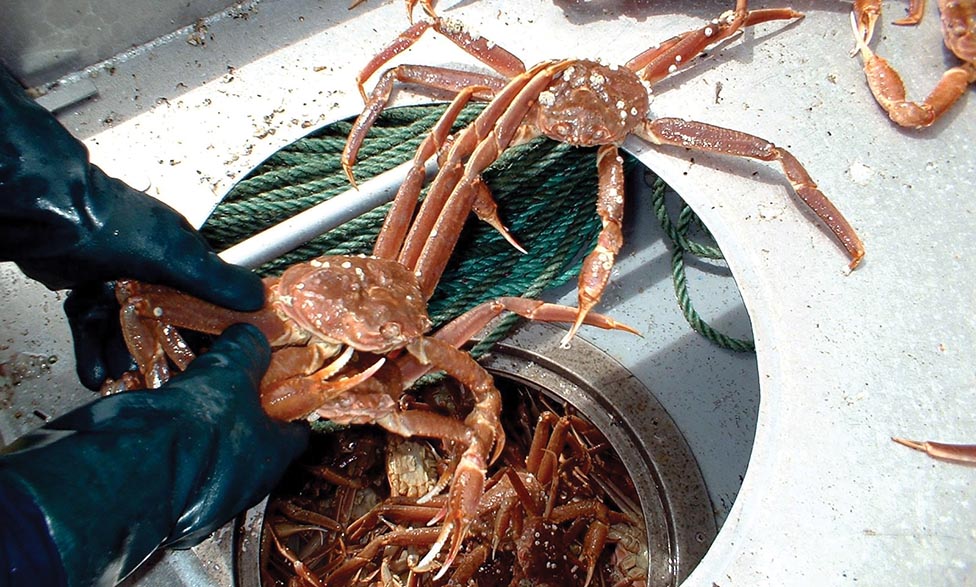 OCI was one of 13 companies from Newfoundland and Labrador in China recently as part of the Atlantic Growth Strategy mission.

“Ocean Choice is excited to enter into this co-operation agreement with Qingdao Meichu Food, which is focused on the expansion of sales of our seafood products in the Chinese retail and e-commerce markets in particular. Leveraging this partnership with our existing strategically-located sales offices in China will provide significant synergies to increase the presence and awareness of our Newfoundland and Labrador seafood products in the world’s fastest growing seafood market,” said Martin Sullivan, CEO of Ocean Choice International.

The MFU (Maritime Fishermen’s Union) wants to reinstate a rule that no gear could be aboard vessels between 9 p.m. and 4 a.m. This rule was in place for many years, but was removed by DFO in a new management plan several years ago,

The MFU wants to apply the rule in LFA 25, which is part of the Northumberland Strait between P.E.I., New Brunswick and Nova Scotia.

According to fishermen, there are mixed opinions among his members as to whether the rule should be revived or not.

Scientists at the New England Aquarium will be testing ropeless fishing gear with lobstermen in the Gulf of Maine.

Their goal is to try to reduce the number of entanglements that could kill endangered North Atlantic right whales. Scientists estimate there are only about 450 right whales left in the ocean, and there have been no documented births this season.

The tests involve fishing gear that employs a large floating spool instead of vertical rope lines. Funding for the study came from a federal grant worth more than $225,000.

On November 12, Marc Miller, Parliamentary Secretary to the Minister of Crown-Indigenous Relations, and Rémi Massé, Member of Parliament for Avignon-La Mitis-Matane-Matapédia, joined Darcy Gray, Chief of the Listuguj Mi’gmaq Government, for the signing of the Listuguj First Nation-Canada Fish Framework Agreement.

The Agreement represents an important act of reconciliation, based on mutual respect and recognition of the rights and interests of the Listuguj Mi’gmaq Government and all Canadians.

Listuguj consists of approximately 4,100 registered members. The community is located on the north shore of the Restigouche River in Québec, north of the interprovincial bridge linking Québec and New Brunswick.

The Listuguj Mi’gmaq Government is one of three Mi’gmaq communities of Québec, all of which have a treaty right to hunt, fish and gather for a “moderate livelihood,” as confirmed by the Supreme Court of Canada’s 1999 Marshall Decision.

Ocean Choice International recently announced the construction of a state-of-the-art vessel — an exciting addition to their local operations.

This new vessel represents a major investment in the province’s fishery, resulting in significant new direct year-round job creation as well as indirect opportunities for the local service sector, the company said. 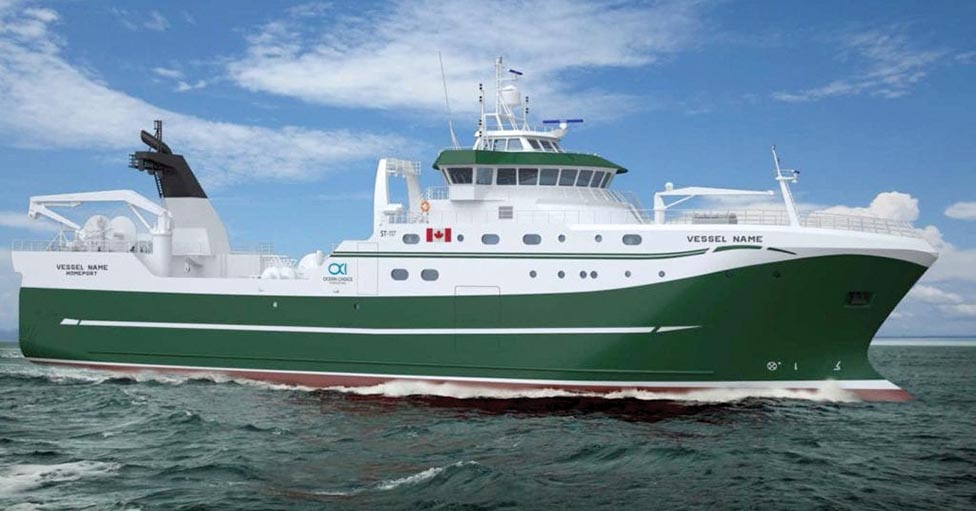 This Arctic-class vessel will create approximately 70 new, full-time, year-round positions and enable Ocean Choice to provide its workers at sea the safest possible marine working environment. The advanced technologies onboard will maximize yield, while minimizing processing times, ensuring Ocean Choice continues to deliver the highest quality products in the world.

“We are dedicated to growing our seafood business responsibly, and this strengthens our ability to provide superior quality product that our customers have come to expect, while minimizing our impact on the environment. This is an investment in our province’s fishery, and its future.”

“It’s an exciting day for everyone here at Ocean Choice, including our 1,700 employees across the province and the many local suppliers we work with,” explained OCI president, Blaine Sullivan.

The broad suite of technology and energy efficiency investments in this vessel will contribute to the introduction of one of the most modern and efficient fishing vessels in the Canadian fleet.”

The new vessel boasts several green features — a testament to the company’s dedication to safe and environmentally-responsible operations. The vast majority of seafood harvested or sourced by Ocean Choice — more than 90 per cent — is either certified sustainable by the Marine Stewardship Council or part of a robust Fishery Improvement Program.

The Wooden Boat Museum of Newfoundland and Labrador (WBMNL) has partnered with Thrive to deliver a wooden boat building workshop in St. John’s.

Under the guidance of WBMNL’s Master Boat Builder, Jerome Canning, 11 participants from Thrive will build a traditional Grand Banks’ dory over the course of six weeks.

The workshop began on November 13 and will run three afternoons a week for the duration of the program. The purpose of this project is to teach the youth participants, age 18 and older, traditional and contemporary woodworking skills related to boat building.

Through this process, they will gain a knowledge of and appreciation for the rich heritage associated with Newfoundland and Labrador’s wooden boats and learn practical skills that will enhance their opportunities in the workplace.

Aligned with WBMNL’s mandate, this partnership represents an excellent opportunity to transmit our wooden boat building knowledge and skills onto younger generations. 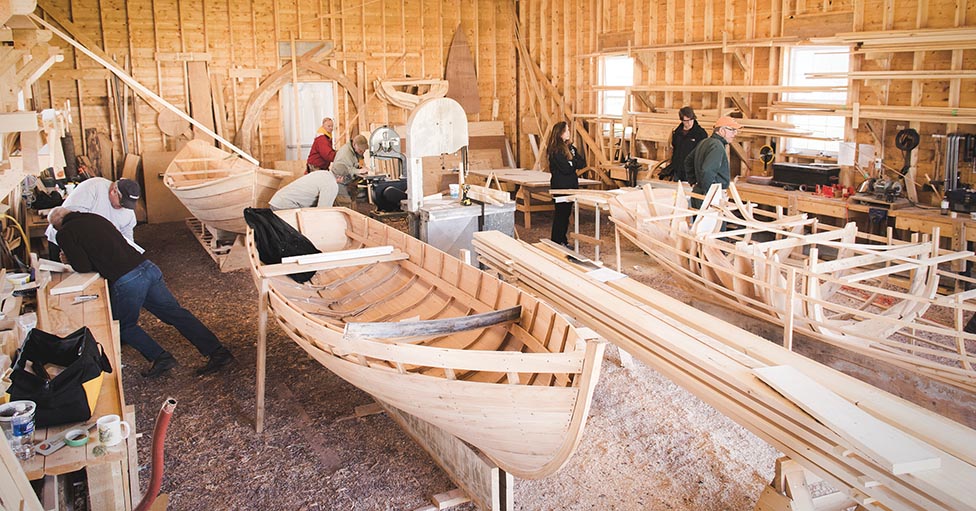 “The Wooden Boat Museum is excited to be working with Thrive to provide young people with the opportunity to build a 17-foot Grand Banks’ dory. Between now and Christmas, participants will have an opportunity to learn some woodworking and boat building skills while learning about the wooden boat as part of our heritage. At the Wooden Boat Heritage conference in 2016, we affirmed that boat building had an application in both education and cultural appreciation. Since then, we have been seeking opportunities to work with youth. Our partnership with Thrive and the generosity of Husky Energy in providing shop space downtown have made this workshop a reality,” said Jim Dempsey, chairperson, WBMNL.

“Thrive is excited to launch the Wooden Boat Building Project. This project will give youth an opportunity to learn new skills, connect with our heritage and work in a team environment. Thrive strives to find new and innovative opportunities to engage our participants and this project provides an excellent opportunity for that,” explained Angela Crockwell, executive director of Thrive.

Thrive Community Youth Network (CYN), St. John’s, is an umbrella organization that works with the community to address gaps in services, build community partnerships, increase awareness of existing programs and services and conduct outreach to our most marginalized youth.

Thrive was established in 2001 and is part of the Province of Newfoundland and Labrador’s CYNs. The CYNs were established to provide services and support to resilient youth 12 – 18 years of age who live in poverty and have limited access to mainstream programs and services. Thrive is seen as a leading youth serving organization within the province of Newfoundland and Labrador.