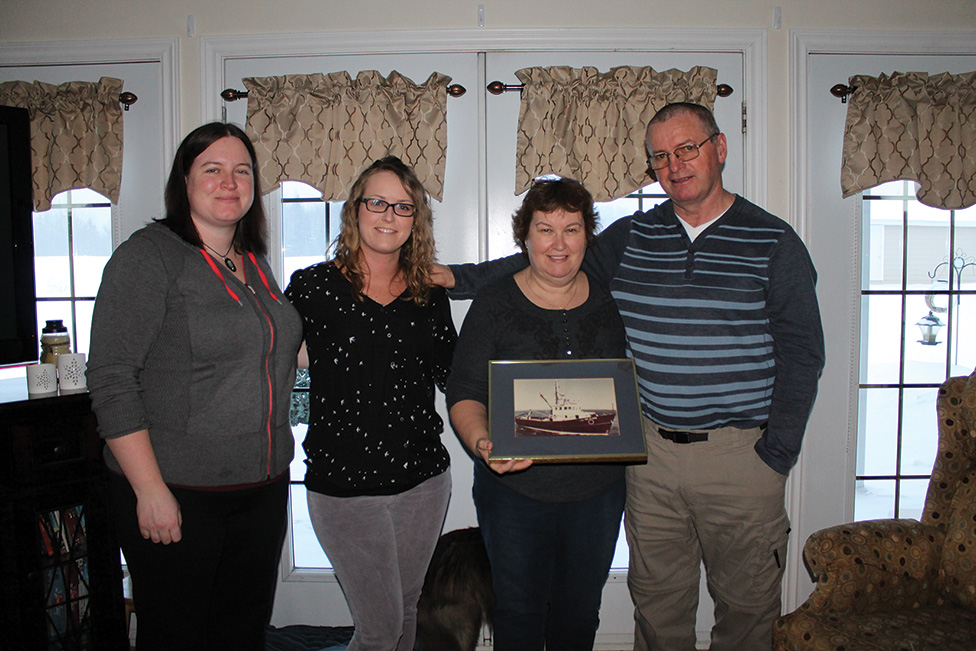 Once a Farmer at Heart, Man Builds Family Fishing Enterprise

Pictured above: Members of the Ellis family: Kathyrn, Carolyn, Diane and Stephen.

Stephen Ellis had planned to be a farmer.

The youngest of 10, he wanted to farm the land that had been in his family for generations.

But sometimes life takes you in another direction.

For Stephen, now 60, that direction was to the water and fishing off the coasts of all four Atlantic provinces.

From his early beginning as a deckhand on his father’s lobster boat to owning five fishing boats, Stephen has always worked for family or had family work for him.

This family fishing business that has expanded over the past four decades now includes two of his three daughters. Kathyrn captains one of the five boats he owns and Carolyn is a first mate.

The three spend most of their time out at sea fishing while Diane, the wife and mother takes care of the business-end of things in Canobie, New Brunswick from their home on the family property. 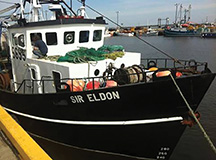 As the four sat around the kitchen table on a stormy January afternoon, they talked about how the fishing business grew for the family over that time and what the future may hold.

Stephen says he was in Grade 5 when he first went fishing lobsters with his father, Eldon from the wharf in Stonehaven.

“I’d go in the morning before school and then after school,” he said of his early start in the fishing industry.

After graduating, he farmed for a year. Then the next year, 1976, Stephen and three of his brothers decided to fish together. One brother had a 45-foot boat and wanted to go to a 65-footer but needed his captain’s license.

“He only had Grade 8, so me and another brother went to the Caraquet School of Fisheries and got our captain’s license so we could all fish together.”

He said that lasted two years before the partnership was split. Stephen and his brother, Murray continued to work together.

The two took on fishing a crab license with the Sylvie Claire in Caraquet. Stephen skippered it for a year before the brothers bought it outright.

They fished with this boat until having a new boat, Sir Eldon, built in Caraquet in 1981.

“I should remember that,” Stephen said with a smile as he looked at Diane. “That’s the year we got married.”

Through their company, Sir Eldon Ltd., named for their father, they continued to fish crab and winter groundfish until the crab moratorium and cuts to the crab quota sent them looking for fishing opportunities in other provinces.

“We used to fish winter groundfish until they cut us off completely or almost completely,” he said of the Department of Fisheries and Oceans.

Stephen added, with crab he went from being able to catch half a million pounds to 400,000 pounds.

They expanded their business into Newfoundland in 1991, fishing cod and Icelandic scallops.

“I had a call from a guy looking for a boat for winter cod fishing.”

While fishing for cod, Stephen says they were also getting some Icelandic scallops in the gill nets off the Grand Banks. So Stephen and one other boat decided to give that fishery a try.

He admits it was trial and error at first but things soon began to work in his favour. 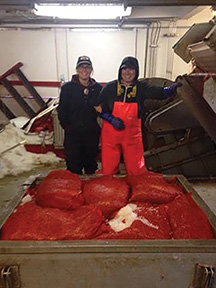 Stephen said Icelandic scallops sold for $6 to $7 per pound on the U.S. market but only $3.50 a pound in Newfoundland.

Once the scallops were labeled a semi-processed item, it could be sold off of the Island and they began marketing them into the U.S.

“When we started, I was the only one who really knew anything about scallops. No one in the crew even knew how to shuck them,” said Stephen.

“We started pretty slow and each trip out aimed to get 10,000 pounds of scallop meat.”

Stephen fished with a crew of 12 on 14-day turnarounds on a boat that didn’t have bunks for them all.

“When you got up, you rolled up your sleeping bag so the next guy could roll out his.”

They continued with that fishery until 1997.

A year earlier Stephen went into partnership with Ralph Critch in a company called Eastern Mariner Ltd. Critch’s son bought him out of the partnership in 2000.

The next year, the Ellis brothers bought another boat called the Jean Collette and continued to fish what they could.

In 1999, Stephens’s brother and partner, Murray retired from fishing. Rather than buy him out, the decision was made to sell the New Brunswick crab license, something Stephen and his wife, said was a mistake.

“In hindsight, we should have bought him out and kept it. Then we would still be fishing crab here,” Diane said.

Despite that regret, the family business continued with Stephen at the helm and his two nephews, Dean and Patrick Ellis, first joining him as crewmembers and then captains on his boats.

He bought another business that he got his nephew, Dean to run. With the purchase came two boats, one he kept while selling the other. 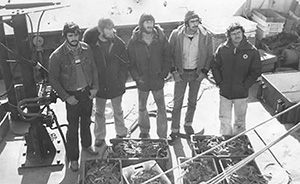 “That’s when we really started expanding cause those were the licenses we bought in Newfoundland,” said Diane.

From then on, all three boats were based in Newfoundland and the company continued to grow along with more family involvement.

Ellis still fishes shrimp out of Shippigan, which is his only N.B. based fishery. The rest is out of Newfoundland, from ports in northern Labrador to southern Newfoundland. Now with a fleet of five boats, each one is busy fishing licenses of shrimp and crab.

“There are more fishing opportunities. The shrimp in the Gulf is very good and so is snow crab,” said Stephen.

“One season I landed in seven different ports from northern Labrador to St. John’s to Cape Breton,” said Carolyn, laughing.

Diane confirmed it can be busy and hectic for each boat and crew depending on where they are fishing and what company they negotiate to sell their product to. This determines the ports they land in.

Kathryn, who joined the family business after graduating from high school, said this past year she had three weeks off over nine months.

When asked why she decided to join the family business, Kathryn echoed her father’s sentiment of not wanting to be cooped up inside all day.

“I really didn’t know what I wanted to do but I couldn’t see myself doing a 9-5 job and sitting at a desk all day,” said Kathryn.

Not really wanting to go to university and wanting to earn money to buy her own car, Stephen made her a deal. If she fished for him all summer, he’d match what she saved for a car.

“I was going to fish for the summer, get a car and that was it. But that was 12 years ago,” Kathryn said with a laugh.

With her father’s encouragement or pressure, depending who you ask, Kathyrn got her 4th class to be a first mate on the boat when she was 19.

“I don’t know if I would have ever done it if he hadn’t of pushed me,” Kathryn said smiling at her father across the table.

Four years later, at age 23 she went back to the Caraquet School of Fisheries and took her 3rd class. This allowed her to captain a boat.

“I couldn’t see myself doing anything else,” said Kathryn, now 30.

Carolyn, 33, began fishing as a way to make money to help pay for university.

“When I saw how much she was making, I wanted to be a part of it.”

Carolyn fished from May to August and after 10 years and two degrees she went on the boat full-time.

“It turns out fishing is more profitable than philosophy,” said Carolyn.

Last year, when her father needed another first mate she took her 4th class. With the classification came a raise.

Now Carolyn fishes as a first mate with Kathryn on the Julie Phillip.

Both say their father is a great boss who doesn’t expect any more of them than he does his nephews and other crew members.

“I know Kathryn feels a lot of pressure to always outdo herself, but for both of us it’s less about being the boss’s daughters and more about being women in a male-dominated industry,” said Carolyn.

“It’s harder for Kathryn, having a lot more responsibility than I do and also a lot more contact with other skippers; she used to say that she has to work twice as hard for half the credit, and there’s always that element when working with a new crew (or landing in a new place) to show them that we do work as hard as everyone else, and often harder.”

Both girls say it’s gotten better over the years.

“The worst thing I hear nowadays is so are you the cook,” Carolyn laughed. “I love being able to answer no, I’m the first mate, and my little sister is the skipper.”

When asked what the future plans for the company were, each looked at the other and laughed.

“Well that depends on what week you ask,” said Diane.

Both daughters quickly chimed in that they had big shoes to fill.

“We just said this year we have to start learning how this business is actually run.”

Diane says the youngest daughter, Amanda, 26, once asked to learn what she was doing, but then found work with the federal government.

“We’ve talked about it but I guess we have to sit down and talk about it. I mean, it’s tough cause the fishery is unpredictable.”

Stephen says he does plan to downsize the fleet from five to four boats. That way, with five captains and four boats, each skipper can take a break and Stephen can take over.

“We have so much lined up for my boat to catch that it can’t stop,” said Kathryn.

“Stephen could spell everybody off when they needed it,” said Diane who added, “He’ll never stop working.”

But the family does enjoy their downtime when not fishing, taking trips to warmer climates. But there is also work to be done, says Stephen.

“We have to do maintenance on the five boats, get inspections done.”

When asked if planned to retire, Ellis said it depends on his health.

“I love fishing. I love the challenge of fishing.”

So for now, it looks like Stephen will continue to head the company he built with the help of his wife and family. But who knows how soon the Ellis girls may take it over.

Back in Business in Brudenell: Mothballed Lobster Plant Given Renewed Life Under New Owners

No Replies to "Once a Farmer at Heart, Man Builds Family Fishing Enterprise"