The death of at least 13 critically endangered North American right whales in Canadian waters this summer could have “huge potential for impact” on the fishing industry, fishermen were told during the southwestern Nova Scotia Lobster Fishermen’s Forum in Yarmouth on September 20.

A panel discussion at the forum on Marine Mammal Issues brought together Cathy Merriman, DFO species at risk biologist, Tonya Wimmer, director and founder of the Marine Animal Response Society (MARS) and Bay of Fundy fisherman Hubert Saulnier from Local 9 of the MFU to talk about what happened, as well as ways fishermen can help reduce the risk of entanglement.

“It still baffles me what happened this summer,” Wimmer said.

Between June 6 and September 15, there were a total of 13 reports of dead right whales; nine in the Gulf of St. Lawrence and four floating offshore Newfoundland. In addition, there were six cases of entanglements in waters off New Brunswick.

“This has never happened anywhere, ever before,” Wimmer noted. “This many dying in one year is very unprecedented. There were three times more deaths than babies this year.”

Of the seven necropsies conducted on the right whales, four showed blunt force trauma was the cause of death, two revealed it was a case of entanglement and one was too decomposed to tell, Wimmer explained. 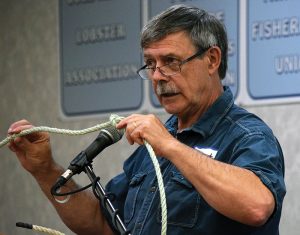 Simply tying a knot in the buoy line every 25-30 fathoms, creating a weak link, is one way to help reduce marine mammal entanglement in vertical lines as demonstrated by Bay of Fundy fisherman Hubert Saulnier at the SWNS Lobster Forum. Kathy Johnson photo

With an estimated population of 458 animals, the North American right whale is one of the most endangered whales in the world, Merriman said, describing the series of events this year “pretty catastrophic” to the species. The mortality rate is “a huge proportion of the population,” Merriman added. “It’s probably devastating to the recovery of that species.”

In the U.S., NOAA Fisheries has declared the deaths of North Atlantic right whales along the coast of the U.S. and Canada an Unusual Mortality Event, triggering a focused, expert investigation into the cause by both countries, Merriman said.

“This is getting a lot of attention, not just in Canada,” she explained.

Bay of Fundy fisherman Hubert Saulnier, from MFU Local 9, told fishermen there are a number of things they can do to help reduce entanglement in vertical lines, such as simply tying a knot in the buoy line every 25 to 30 fathoms, creating a weak link.

“That knot will break prior to the rope breaking,” Saulnier said. “The power of a whale will part that, no problem,” he said, adding the same can be done on rope around gillnet floats.

Saulnier told fishermen they are going to have to be pro-active on the entanglement issue. “If you have good ideas we need them,” he said, advising fishermen “if you do see an entangled whale of any sort report it, and if you have the time, keep an eye on it” until a marine animal response team can arrive on scene.

The Marine Animal Response Society (MARS) is a network of 10 organizations in the Maritimes. Besides rescue and response, the society also collects scientific data. The toll-free hotline to report an entanglement is 1-866-567-6277.