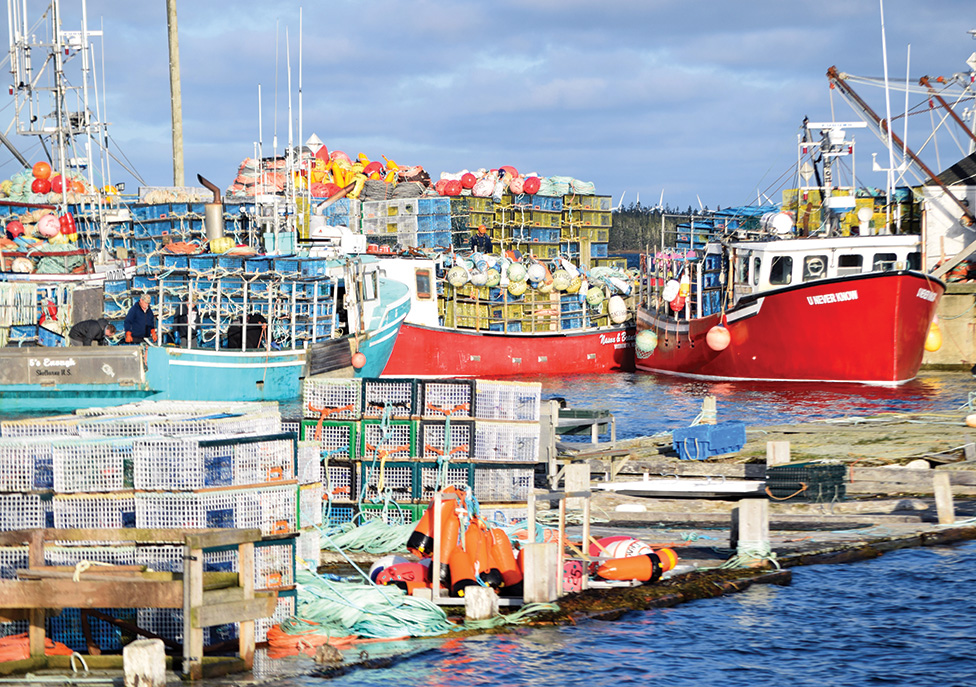 Above photo: The Lower Woods Harbour wharf is piled high with lobster traps as fishermen prepared for dumping day last fall. A rising Canadian dollar, low shore prices where commercial fishing seasons are currently open, and ample inventory for processors as well as the live market are adding up to an uncertainty for the opening marketing conditions for the LFA 33 and 34 lobster fishery. Photo by Kathy Johnson

Uncertainty would probably be the best way to describe any forecast for the opening of Canada’s largest lobster fishery in southwestern Nova Scotia on November 27.

A rising Canadian dollar, ample inventory on hand for the processors as well as the live market and low shore prices where commercial fishing seasons are currently open are all cause for concern, said Meteghan fisherman Graeme Gawn, president of Local 9 of the Maritime Fishermen’s Union (MFU).

“Markets are good but its not a high demand time of year right now,” said Gawn.

“There’s lots of lobster in storage. The processors still have product, the price is low, so hopefully it comes around. The high Canadian dollar doesn’t help very much, but a lot can change. There’s a lot of unknown variables,” including the weather.

Last season, the weather kept fishermen in Lobster Fishing Areas (LFA) 33 and 34 ashore more than at sea during the all-important opening month of the season and persisted well into spring along with cold water temperatures.

On the flip side, it didn’t take long for the opening price of $5.25 to jump to $7 per pound. The season closed on May 31 at a record setting $8/pound shore price. Gawn said fishermen are hoping for an opening shore price of $6.

South of the border in New England, lobster landings remain strong in some areas and have been fluctuating in others this year, said Beth Casoni, executive director of the Massachusetts Lobstermen Association.

“In the outer Cape Cod area around the outer islands, fishermen are doing well and continue to have big landings year after year,” Casoni said.

“In Cape Cod Bay, fishermen are having record landings, 8-10 pounds per trap on average which is unheard of. As you move to the north landings are down a little bit.”

In Lobster Area Management One, which extends from Cape Cod Bay to Gulf of Maine and to the Canadian border, landings have been fluctuating up and down, said Casoni. “We’ve almost seen a shift in landings from north to south.”

Casoni said there is concern about the status of the lobster stocks in the Gulf of Maine and Georges Bank.

“The water in the Gulf of Maine is one of most warming spots on the planet,” she said, adding New England lobster fishermen are also being plagued by predators. Waters are “thick with black sea bass, dogfish, striped bass and tautog and they are all feeding on lobster. Whenever they (fishermen) throw a short (lobster) back, they’re just swallowing them whole,” she said. And then there are the seals who have “definitely been wrecking havoc” in the outer Cape Cod Area.

As for markets and shore price, both have been good, said Casoni. The shore price did drop in early September.

Casoni said a lot of Massachusetts fishermen are taking advantage of a state permit that allows them opportunity to sell product directly off the boat or truck.

“A lot are doing it and see returns at the end of year. Seven dollars off the back of a truck versus $4 from a dealer is more money in their pocket.”

Both Casoni and Gawn said bait is an issue that has the potential to grow.

“Bait supply is always a concern,” said Gawn. “Bait will be supplied, but it will be expensive. I don’t know what we’re going to do about it.” Last year bait redfish went for 80 cents a pound is expected to cost more this year, he said.

There are almost 1,700 active lobster fishing licenses in LFAs 33 and 34, which extend from Eastern Passage in Halifax County to Burn’s Point, Digby County. According to preliminary statistics from the federal Department of Fisheries and Oceans (DFO), the combined landed value for the lobster fishery in LFAs 33 and 34 for the 2015/16 season was just over $573.3 million, with landings totaling more than 53 million kilograms.

No Replies to "Rising Canadian Dollar and Inventory Concerning For N.S. Lobster Fishermen"