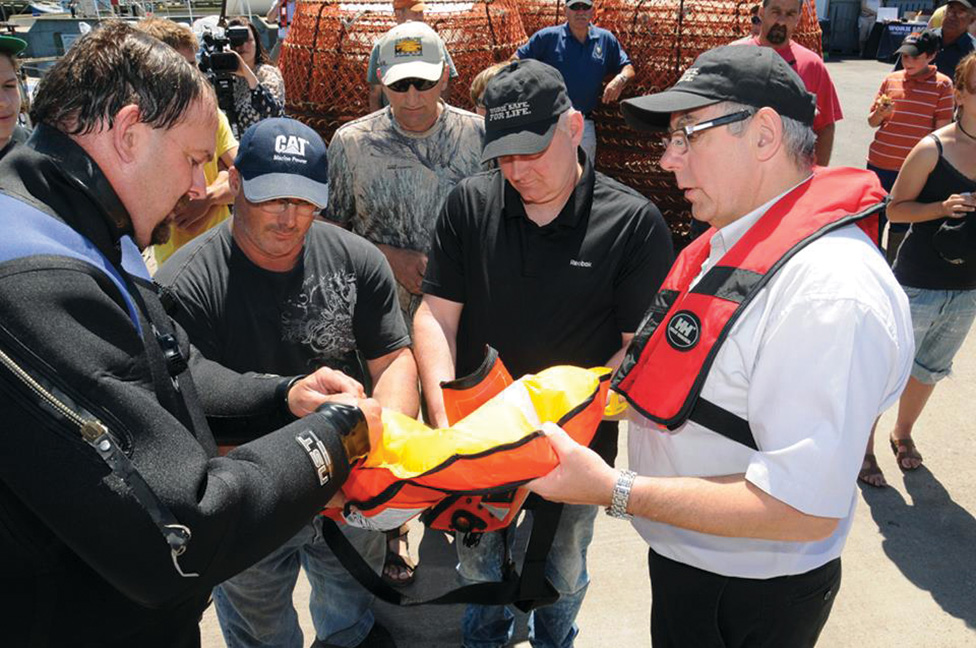 Stewart Franck thinks about safety at sea a lot.

In fact, the executive director of the Nova Scotia Fisheries Safety Association is paid to think about it and where possible, improve the safety record of the most dangerous commercial industry in the country.

Stewart was born in Bridgewater, Nova Scotia and still lives in the region, although he lived in Manitoba for several years when his parents moved there when Stewart was a boy.

Although Bridgewater is 15 miles inland from the Atlantic Ocean, it is situated on the LaHave River at the end of the marine navigable water traffic and has an association with marine industries, including boat building.

Stewart grew up in a farming environment but safety became his calling early in his career and safety issues span all industries.

“I was involved in safety in various industries and I saw this (fisheries) as an area that needed attention so a few years ago I decided to make it my new career challenge,” Stewart says.

It is difficult to talk to Stewart Frank and not have the conversation turn to safety issues very quickly. When interviewed, he managed to carry on a short chat about his wife, children and grandchildren, but it wasn’t long before he segued to the business of saving lives at sea and reducing onboard injuries.

Whenever fishing safety is discussed, one statistic takes priority; on average, one fisherman a month dies at sea in Canada. That makes the industry the most dangerous occupation outside the military or policing. What is even more astounding, the number of fatalities has remained constant for many decades despite vast improvements in technology, vessel construction and awareness.

But yet, Stewart Franck is optimistic that change is finally coming.

He says that other than a single accident that killed five men onboard the fishing vessel Miss Ally in February 2014, skewing the statistical annual average in the past decade, Nova Scotia’s accident and fatality record seems to be trending down in terms of the number of fatalities.

One encouraging statistic indicates that in occurrences where a vessel sinks, more people are surviving the incident.

“They are doing better at knowing where to quickly locate safety equipment such as survival suits and they know how to properly use that equipment more than years ago. They are better trained in practices like getting into their life rafts and things like that — these are the types of good news stories we hear these days,” Stewart explains, adding that not long ago, the first job was to persuade vessel owners to even carry appropriate safety equipment onboard their vessels.

The reason for the improvement today is simple — safety education.

Vessel owners and operators are better aware of safety procedures and techniques and are creating a better safety culture, not only in preventing fatalities but also avoiding onboard accidents that cause injuries.

“We see more safety drills at the wharf for example. We’ve had more than 50 drills in the past two years and many more planned.”

Stewart calls safety training such as drills a “dialogue starter,” explaining that often, an older crewmember will start talking about how something similar to what they are learning about now happened to him or a colleague in real life years ago. In turn, younger guys will ask questions about what happened and inevitably the conversation grows to how they are now learning how to prevent such an incident or at least minimize damage or injury.

“Those examples are now shared from wharf to wharf because we carry those stories with us as we go about our training programs.”

Stewart also likes to reiterate how many other victims there are when someone doesn’t come home. Obviously the immediate family suffers great trauma, but the pain and upset extends far beyond that.

Shipmates are often haunted for years — captains and vessel owners often are tormented as they constantly wonder if they could have avoided tragedy — rescuers who “almost” saved a person from drowning suffer guilt — everyone second-guesses himself or herself and worry if they could have done better. Even professionals like search and rescue (SAR) teams are sometimes traumatized when they have to recover bodies, wondering if they had done something differently would the victim still be alive today.

In his own way, even Stewart has a sense of remorse when a fisherman is lost.

“In my own small way, I am bothered because I wonder if I let someone down,” he says.

Stewart says before a person places himself at risk, he might be more careful if he considers all the people who will suffer if he doesn’t come back. It is not a matter of blaming the victim but rather a matter of raising awareness to the highest degree possible to keep everyone safe.

Stewart has very high praise for the men and women who work with SAR and Coast Guard and any agency that are the rescuers including fishermen themselves who are often called on to help.

Stewart points out that usually, accidents at sea occur when weather and seas are extreme, making conditions for rescuers incredibly difficult.

“These people put themselves and their equipment at great risk — it’s not like us; you and I can just say no I’m not going to work today because driving conditions or whatever are not safe; these people don’t have that option,” Stewart says, facetiously adding that it is his fondest wish to put all rescue people out of work due to lack of demand. But he knows that will never happen.

Meanwhile, since the interview with Stewart Franck, the Nova Scotia Government announced a plan to make wearing life jackets at sea mandatory. Aware that this is a significant undertaking, the Department of Labour is taking a go-slow approach beginning with a small geographical area. It will concentrate first on fishermen in the Northumberland Strait and western Cape Breton. The plan is to send department officials to the wharves to talk with fishermen first and then beef up implementation over the next few years.

As one official put it, “over the next couple of years we are going to be taking a bit stronger approach where we will not only be asking them to wear them, we will be expecting them to be wearing them.”

While conducting research on safety at sea, officials also heard from families of men lost at sea who added another dimension to the need for wearing flotation devices at all times. Often, the bodies of people who drown at sea are never found. Families say the grieving process is far more difficult and closure is nearly impossible in those circumstances.

A simple flotation device would at least keep the body afloat and available to be found by searchers.

With the broader discussion of safety matters and stronger government policies on safety at sea, Stewart Franck’s optimism that a safer tomorrow will soon be reality just might be right.

If everyone does his or her bit to help, maybe it will happen.

No Replies to "Safety First"