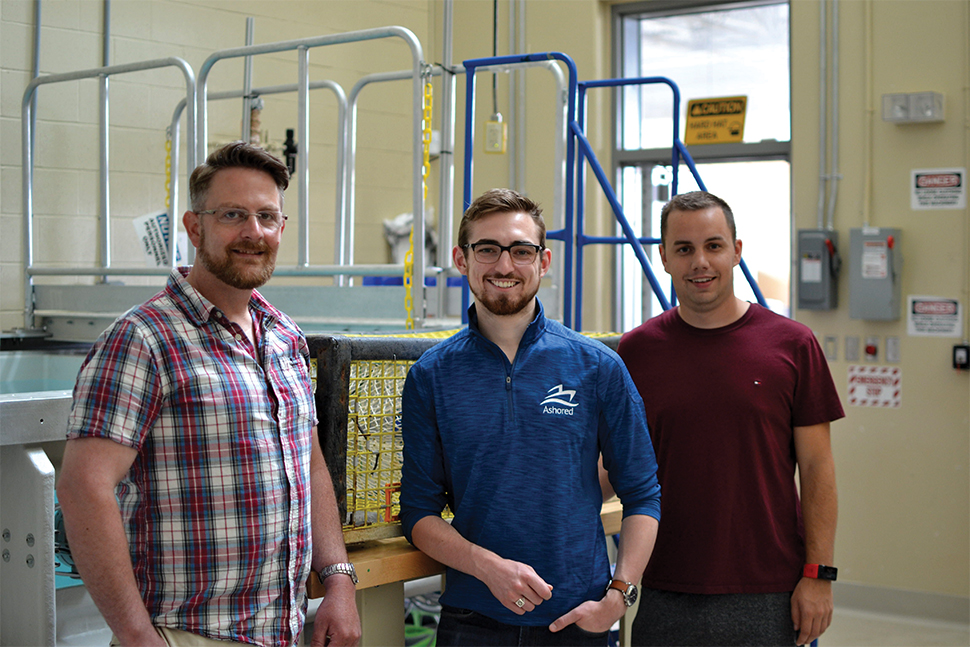 A smart buoy that will provide a ropeless gear option for crab and lobster fishermen is set to be unveiled this fall by Halifax-based Ashored Innovations.

Initial testing of the smart buoy, which has been designed from a fishermen’s perspective, was slated to began in September. “At the current stage we expect to start testing in two weeks (early September) so we’re really excited about that,” said Ross Arsenault, co-founder and Chief Operating Officer (COO) for Ashored Innovations.

In a nutshell, the smart buoy is designed to stay on the ocean floor with the fishing gear and can be deployed to the surface by fishermen when checking their catch. An onboard system would allow all fishermen to see the plotted buoys and the direction the gear is set to avoid setting over top or dragging through set gear.

The system will allow “everyone looking on their plotter to see not only where the trawl lines are, but the specific direction they are, so you’re not going to cross over top,” said Arsenault.

Testing this fall is going to take place on various fishing grounds, including southwest Nova Scotia and the Bay of Fundy.

“We’re very much taking the approach where we understand the waters will test differently and fish differently, so we’ve consulted with fishermen in each area to make sure all fishing factors are taken into account,” said Arsenault.

“We need to understand how different depths are going to impact the system to make sure it will be ready for full use.”

Arsenault said through discussions with fishermen, it was emphasized “the failure rate would have to be extremely low if they were going to use any sort of fishing gear that was keeping all their equipment at the bottom of the ocean… it needed to have an extremely low failure rate to the point of non-existence so what we did, we doubled up and added extra redundancies to ensure if the initial release mechanism that allowed the buoy to rise didn’t work there are fail safe measures that the buoy will rise to the surface.”

“We initially thought we would be creating a smart trap that could save fishermen money and would increase their efficiency across the board, but after doing some research and talking to fishermen we really figured out that the areas where we were trying to improve efficiency we couldn’t,” said Arsenault.

“We couldn’t pin down some exact returns on investments and we learned about other issues like the right whale problem and ghost traps, so we changed direction to a more conservation approach which is merging the blend of how commercial fishing can become more sustainable, how can conservation exist without penalizing commercial fishing in the process. So many fishermen are suffering because of the right whale protection measures and its not really their fault. What our system does is it keeps the buoy by the trap on the bottom of ocean floor, keeping the water column free of fishing gear and ropes that allows whales, marine life and shipping vessels to pass through those waters without getting tangled, so by keeping it by the trap what we’re doing is creating a smart buoy not a smart trap. We wanted to make sure we were actually addressing a problem that mattered and doing so in a way that was actually going to benefit the people who were going to be using it.”

When active fishing zones are closed due to the presence of right whales, it costs fishermen an incredible amount of money, said Arsenault.

“We wanted to design it from their perspective so that it will be easy to use, it benefits them, they can see a clear return on their investment and it’s just a sensible solution,” said Arsenault.

“Fishermen have been very open, sharing some phenomenal pieces of information that has really helped changed our design over time.”

Initially, the smart buoy is being designed for the lobster and crab fisheries, but down the road, could be modified for other fisheries where whale entanglement is an issue, said Arsenault.

“We’re looking into different ways we could modify our system to those cases but for now we are focusing on the trap fishing market.”

Arsenault said he expects testing will be conducted for the remainder of 2018. The smart buoy could potentially be released in early 2019.