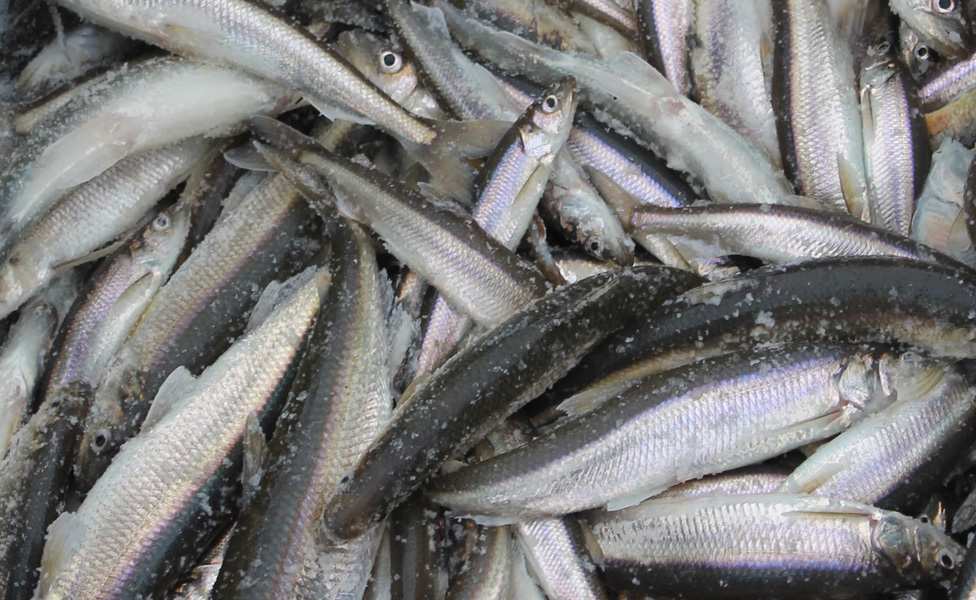 Years ago, the frozen rivers and bays of Northern New Brunswick were busy places.

Not only did the ice provide a means of winter transportation, it came alive with the sights and sounds of smelt fishing.

Hundreds of pickets and poles dotted the waterways to hold the nets in place. There was net upon net up and down the Tabusintac River and out in the bay. Shanties were pulled with horses from nearby shores onto the ice or onto the beaches. Men lived in these small hovels from Monday to Saturday while they fished the smelt nets. 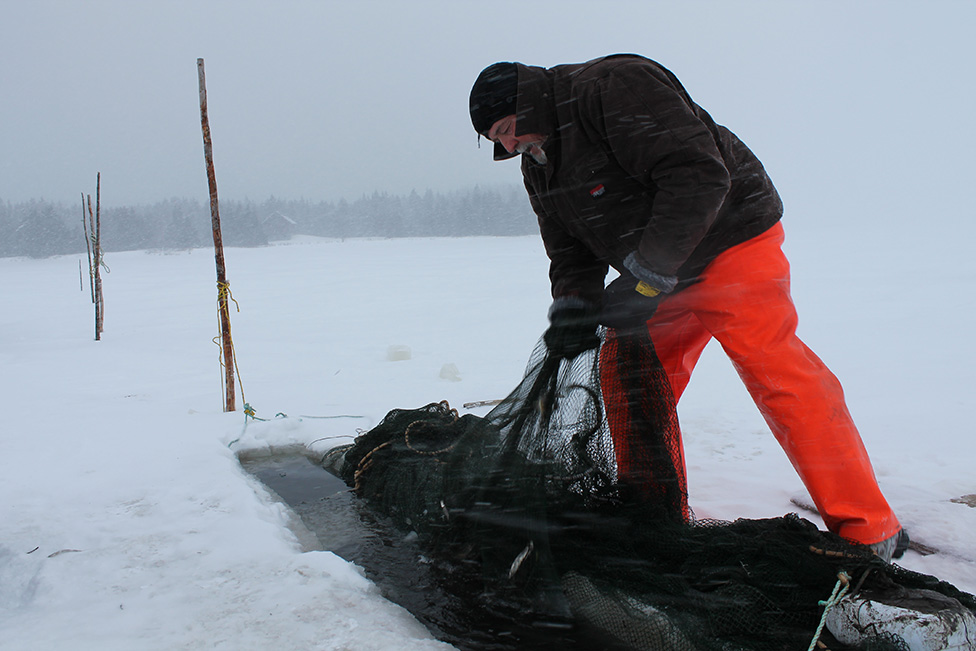 Ernest Robichaud of Tabusintac is one of the few still taking part in the commercial smelt fishery in Miramichi Bay.

They would leave home Sunday night with their horses and sleds and make their way out onto the bays and rivers to begin fishing the bag nets on Monday morning, week after week until the end of the season or the spring thaw.

“They lived right there all week,” said Billy MacEachern. “In those days, the buyers from W.S. Loggies went right out onto the ice and bought your catch. They went from net to net buying the catch. That’s how much in demand they were. I’m sure W.S. Loggies bought hundreds of thousands of pounds of smelts and shipped them down to the States (United States).”

Companies like W.S. Loggies, based in Loggieville, N.B., owned fishing gear and hired men to fish it to help in supplying product for the fish factories they operated throughout Northeastern New Brunswick.

However, those days are long gone. The once lucrative commercial smelt fishery is slowly fading out. The small but tasty fish was a winter staple in many homes, a regular meal two or three times a week.

The smelts were gutted and the heads and tails removed. After being rinsed in cold water, the smelts were dredged in flour, mixed with salt and pepper and fried in butter or oil. They would be served with boiled potatoes and pickles, either chow or beets. 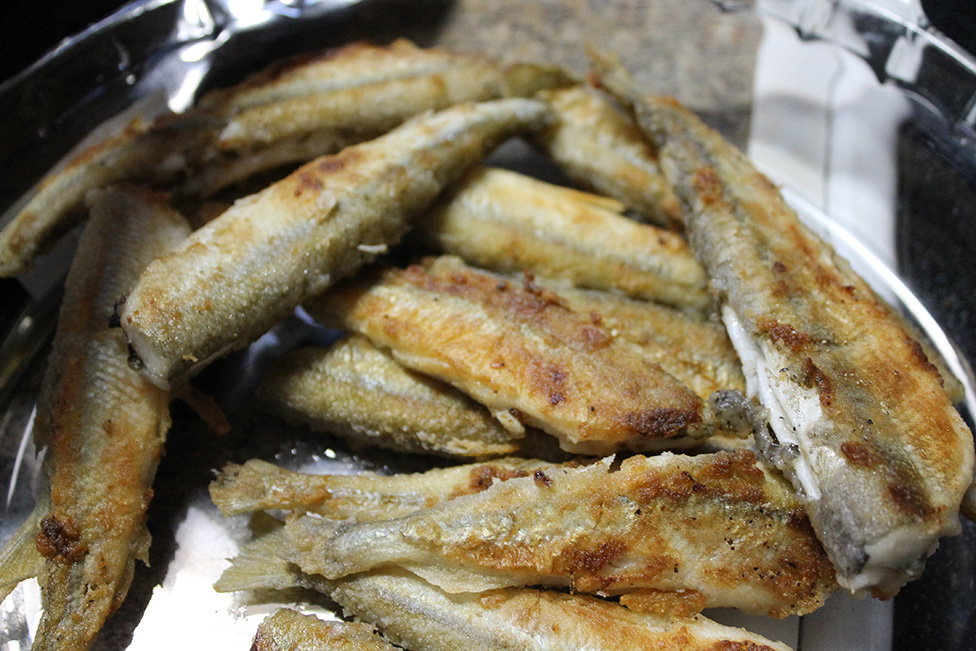 They are still prepared this way but now, many consider having a feed of smelts a treat rather than an inexpensive meal to feed a large family during a long winter.

MacEachern, a resident of Tabusintac, is one of the fisherman not fishing smelts any longer. The career fishermen fished with his father, Ronaldson before going on his own, carrying on the family tradition of being a part of the fishing industry. His own son, Jamie, is a fifth generation fisherman.

“In those days you made more fishing smelts than you did fishing lobsters. You could make better money at it. It was an important fishery.”

Thirty to 40 years, smelts fetched 20 to 30 cents a pound and lobsters anywhere from 60 cents to $1 per pound.

The price of smelts has not gone up that much since MacEachern began fishing 50 years ago. Buyers now pay 60 cents per pound, but the price usually decreases when the catches increase.

He sold the 46 licences and box nets he owned, keeping only the two licences with the bag nets. Those two licences have been passed onto his son, Jamie but they have not been fished for the past five or six years. 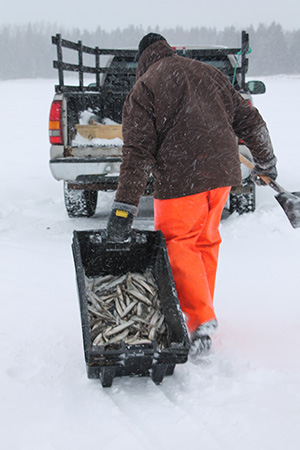 Robichaud loads the catch of smelts from one net. Each commercial smelt fishermen can own 15 licenses.

“It’s a lot of work for the little you make from it. It’s also hard to find people to work to help you fish the nets. It’s a cold job and you’re in the river there all night. It’s a job I got too old to do and I doubt you’ll see anybody else do it,” said MacEachern in reference to fishing the bag nets.

Bag nets can be fished in open water or under the ice. The nets were set on the rising tide and fished on the falling tide.

“A bag net you just couldn’t leave it. You had to be there to fish it on the tides.”

At one time, all smelts were caught in bag nets but when local fishermen learned of and saw box nets in operation, they quickly switched to using them.

“With a box net, you can set it and leave it and go back and fish it when you can, once a day. You don’t have to stay with it and fish with the tides,” said MacEachern. “When the fishermen realized this, they changed.”

Other things that changed over the years involved using snowmobiles.

“It was a lot quicker to get to the nets. You could haul more on the sleds and you weren’t frozen coming home at night on the back of that horse and sled.”

Now in his late 60s, MacEachern believes more than half of the people who own smelt licences in the area don’t fish them. “They don’t set because you can’t make very much at it.”

The days of buyers going out on the ice are long gone. Now fishermen fish the nets, load the catch into the sleds and haul them to shore with their snowmobiles. They then load them onto the backs of their trucks and deliver them to the buyers. Even that is changing, with only three of four companies now buying the smelts.

Joe Savoie of S.S. Fish and Sales in Tabusintac is one of the local smelt buyers.

“We sell to a plant in Nigadoo. They will process them by gutting and cleaning, for the markets in western Canada, Ontario and down in the U.S. “

The buyer said the industry is not thriving and he has seen a steady decline in the number of people fishing. When asked if he thought there would be a time that there would be no commercial smelt fishery, Savoie said, “the way things are going it wouldn’t be that big of a stretch of the imagination to think that it could happen.”

Savoie believes there will always be a demand in a limited market for smelts, but fishermen have to be catching them to supply that market.

But those who do continue enjoy their time on the ice. Ernest Robichaud has been fishing smelts since 1972. He worked as a helper for another fisherman until he was able to buy a few licences and nets of his own in 1979.

When asked why he got into the fishery, Robichaud said it was something to do in the winter and at that time you could make money at it.

“Before I even started fishing, I worked with my father in Neguac and we packed smelts. They were shipped to Quebec and Toronto.”

He added in those times, there was an abundance of smelts and fishermen were able to sell all of them. “My best year, I caught 40,000 pounds. And that is fishing the channels in the river.”

Robichaud points out fishermen on the other side of Miramichi Bay, in Hardwicke and Baie Sainte Anne usually catch more because they have deeper water to fish in and bigger nets to catch the smelts.

“Out here in the bay when the ice thickens it seems to drive the smelts away.”

Robichaud said in the Tabusintac and Brantville area, there are only five or six fishing smelts this winter. That number decreased when Robichaud himself pulled his nets to return to work in Alberta.

In Neguac and Barryville, there are about the same. Across the bay in Baie Sainte Anne, there are a few more but the numbers there are dwindling as well. 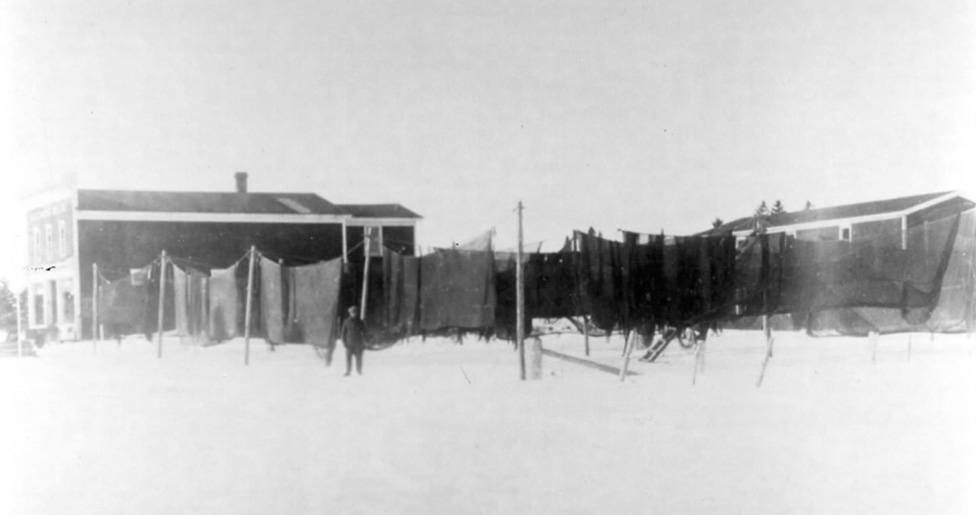 Smelt nets at W.S. Loggies Store in Tabusintac ready for mending after a winter fishery.

“We are a dying breed. There aren’t too many of us left fishing smelts.”

But Robichaud enjoys it and will continue to fish as long as he can.

“It’s good exercise, it gets you out in the fresh air. There are days we are out here that it’s not very nice.”

He admits it is more of a hobby now than something to supplement his income.

Robichaud has his regular customers that buy smelts from him every winter.

A smelt fisherman can own 15 licences and must be a full-time commercial fishermen. MacEachern said when he decided to sell the 46 he owned, he could only sell 15 to one person. He says the new rule was implemented to place a limit on the amount one person could own and allow others to become a part of the commercial fishery.

Robichaud says it can be an expensive fishery to get into, buying licences and gear, but once you are set up, the cost is minimal.

“There’s a bit of expense to get going at the beginning of the season.”

Smelt fishermen don’t see much wear and tear on the nets each season. They may need a bit of mending or patching. Some have lost nets if they fill with slush and sink or get frozen in the ice. After years of use, nets do have to be replaced.

Replacing a net can be expensive at about $1,600 and finding someone to make the large nets is getting more difficult. It is another skill that is dying out.

“There aren’t too many around that can make a smelt net anymore,” said MacEachern. “The only fella I know in this area is almost 80 years old.”

When asked which one was the best smelt, the one caught in the river or the bay, MacEachern said the ones caught in the bay are the best. “When you get them out there caught in the pure salt water, there’s just no comparison between the taste of the smelts. You can blindfold somebody and they can tell you whether they’re eating bay smelts or river smelts.”

For his part, Robichaud says he loved the smelts from Tabusintac, whether they are caught in the river or bay.

No Replies to "Smelt Fishing: A Dying N.B. Tradition?"