The Survival and Patience of Job – Part IV

Life for Job Goudie and his family would never be the same after the explosion that killed his friends Rollie Weir and Ralph King on Monday morning, May 29, 1978.

Job barely survived, but there must have been times following when he wondered if survival was indeed a blessing. His struggle to live had only just begun when the Dobbin brothers pulled him from the ocean in Little Bay.

For weeks, doctors could do little or nothing to fix his broken, fractured and mangled bones. Because his body had been so badly burnt, they had to rehabilitate flesh and skin first. One of the doctors who initially treated Job told Sylvia that it was the first time he had ever held “cooked flesh” in his hands.

For months, Job was in a hospital room with low lighting, in a bed with special sheets, barely able to move because his legs were in traction and worst of all, many of his nerve ends were totally exposed due to burnt flesh. The slightest movement caused excruciating pain.

Most days consisted of bandaging, cleaning and an endless array of treatments.

Later, Job underwent a series of skin grafts. But the most torturous days of all for Job was during treatments called debriding. It was a process that included removing his bandages and dressings and removal of dead or infected skin along with treating the affected areas with a variety of ointments and creams to prevent further infection.

“They did that twice a week and I can’t explain how bad it was, but I’ve often explained it as what it must have been like lying naked on a beach of jagged rocks and glass,” he says, adding that the pain was so intense he would sometimes loose consciousness and suffer hallucinations. 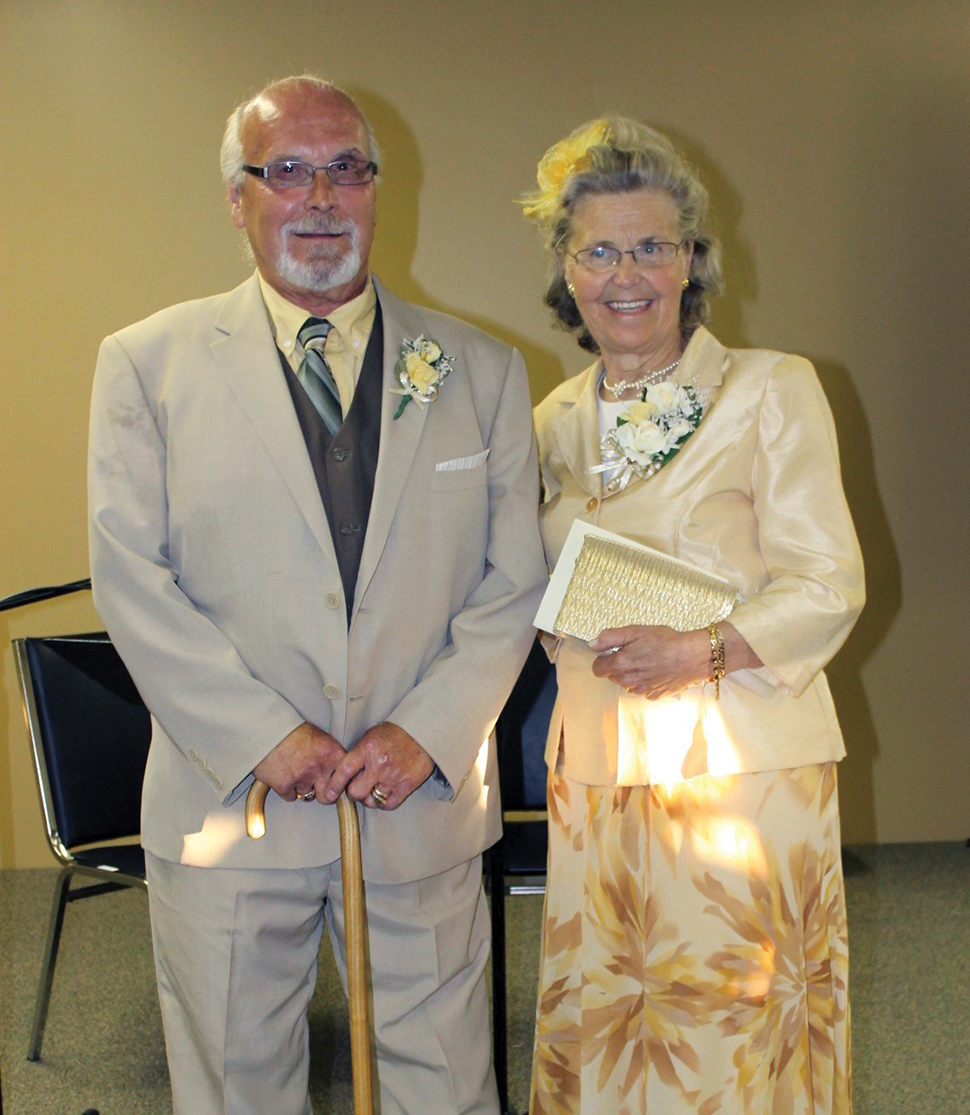 Job and Sylvia Goudie on their 50th wedding anniversary

“I can remember sometimes when they would roll me over in the bed. I would scream in pain, sometimes I would curse them up in heaps.”

Treating Job’s extensive burn damage took months — so long that his broken bones and fractures were healing but not properly. For example, a large bone in one of his legs that had been split down the middle grew together at an angle that prevented him from even standing.

“They had to re-cut that one later and straighten it,” Job says, casually adding that he was a couple of inches shorter after that procedure.

He was also told that he would never walk again or, in the event of a miracle, the best he could expect would be to walk in “baby steps.” They apparently underestimated Job’s determination.

Meanwhile, while Job was fighting to get back in some semblance of working order, life for Sylvia and the children was no picnic either.

“The day it happened, I was in the kitchen when I heard an ambulance going down the road,” Sylvia recalls.

Living on Springdale’s main street, the sound of an ambulance siren was not uncommon and Sylvia didn’t think much of it until the phone rang about an hour later.

Seven months pregnant with their seventh son, Sylvia’s life was turned upside down in the blink of an eye. How would she take care of six sons ranging in age from 16 to two years and another one due in just two months? Would Job ever walk again? Would he ever work again? Where would money come from to pay the bills?

The questions were endless, but answers were few.

But, like her husband, Sylvia Goudie was no quitter. She was fully aware that her sons needed her more than ever and she was determined to make life for all of them as comfortable and full as possible. In the spirit of an old Newfoundland cliché, Sylvia put her face to the gale and marched forward.

Back at the St. John’s Health Sciences Centre, Job continued his long journey to recovery.

It wasn’t always a steady progression of steps forward — there were many setbacks, some of them serious, including an attack of pancreatitis two months after the accident. But still, he persevered and never lost his fighting spirit.

While still in hospital, doctors told Job that he would eventually lose his left leg. Ideally, they would have performed the operation within a year or so but because such major surgery might cause severe infection that, in turn, could create dangerous complications, they postponed the operation until Job was stronger and healed. More than 12 years passed before the amputation took place in 1991.

Job was released from the Health Sciences Centre in January 1979, but still required close medical attention and a lot of rehabilitation. Knowing he would be in rehab a long time, Job and Sylvia considered the feasibility of moving to St. John’s. He also knew that a career requiring hard physical work like he did before the accident was no longer an option, so he decided to go to university to train for something less physically demanding.

Job was accepted at Memorial University (MUN) and six months after being released from hospital, while still in various stages of rehab, he and Sylvia bought a house in St. John’s.

They moved in August 1979. The following month, at age 37, he was a university student doing a full-load of five courses at MUN. Four years later, he graduated with a B.A.Ed. Originally, attaining those degrees was his ultimate goal, but he heard that some school boards needed special education teachers, so, undaunted, Job decided to go back to university for an additional two years and earn a special education degree.

He even considered continuing one more year and doing a master’s program, but now in his 40s, it was time to go to work.

Bursey Collegiate in Grand Falls-Windsor had an opening for a special education teacher and after his arduous educational journey, often stifled by medical procedures that were often extremely painful, including multiple surgeries, Job was finally back in the work world once again.

Not only did he work full time, but also along the way, he and a friend founded an association for Central Newfoundland people who were also living with disabilities. Eventually, the organization gave up their independent status as the Exploit’s Disability Association (EBA) to become the Central Newfoundland chapter of the provincial Coalition of Persons with Disabilities (COD). He also served on the national board of the Council of Canadians with Disabilities.

After more than 10 years teaching, the long days standing on his feet (one foot and a prosthesis) Job found it physically challenging so he quit and got into the tourism business.

He purchased a group of (rental) cabins located on Highway 430 at the gateway to Gros Morne National Park on Newfoundland’s west coast. He and Sylvia ran that business until retiring in 2005.

Job Goudie’s story is one of guts and true grit — survival against all odds. Despite living with nearly constant pain and numerous setbacks along the way, he’d dust himself off and come up swinging again.

In 2012, Job and Sylvia had to deal with every parent’s worst nightmare. Their son Bret had been diagnosed with brain cancer and died in June at age 47. Less than month later, their 22-year-old grandson Jonathan was killed in a motorcycle crash.

Their most recent setback came in 2017 when Job and Sylvia were driving home to Grand Falls-Windsor from St. John’s. A vehicle pulled out from a parking lot making a left turn on the Trans Canada Highway section that runs through the town of Gander.

The driver of the car apparently didn’t see the van and there was no time for Job to even slow down because the car was just a few meters in front of him. The impact drove the engine in Job’s van all the way back into the front seat. Sylvia was knocked unconscious and Job was pinned against his seat by the pile of twisted metal. Firemen had to be called to remove them from the van.

Sylvia received non-life-threatening injuries, but Job’s so-called “good” leg, perhaps better described as his “only” leg was badly injured. A piece of metal penetrated the leg and ripped open a gash all the way to the bone.

But, as with all previous setbacks, the Goudie team rose from the ashes.

Sylvia made a full recovery and after several months recuperating, including five weeks confined to bed, unable to move, Job Goudie was mobile, once again.

No Replies to "The Survival and Patience of Job - Part IV"