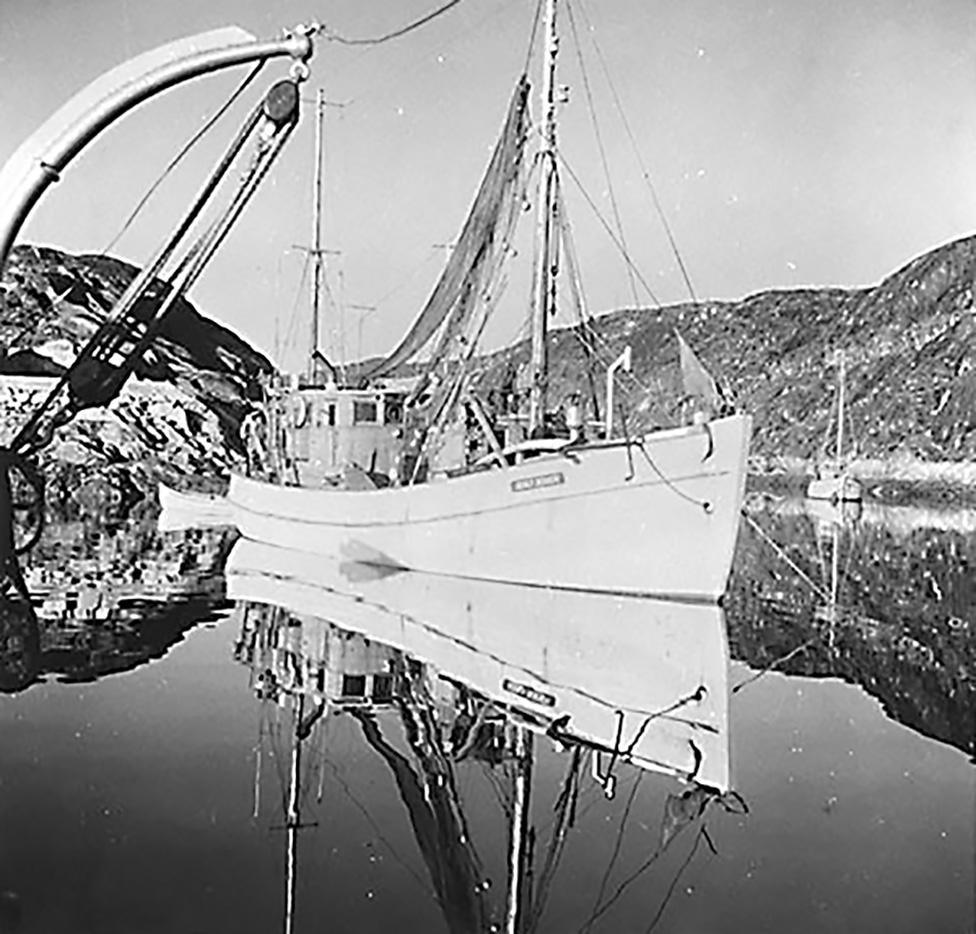 Above photo: The Maraval later named the Notre Dame.

Job Goudie agrees. He is one. At least the fact that he is still alive can surely be described as miraculous or, as his wife Sylvia says confidentially, it was divine intervention that saved her husband.

In May 1978, Job was in a horrific explosion that killed two men, but incredibly, Job came out of it still breathing, but he was far from well.

In 1972, Job and Sylvia, along with their four sons, left their home in Springdale on Newfoundland’s northeast coast and moved to northwestern British Columbia where he had a good job waiting for him.

Life was good for the Goudie family in B.C., but four years later, the call of Newfoundland was growing stronger and Job was getting the itch to go back home.

“We liked it out there, but we were certainly dealing with that famous pull that Newfoundlanders living away from their province get and they long to go back again, but it was more than that. We were thousands of miles away from Newfoundland and by 1976, we had six sons. The older boys could barely remember their grandparents or any of their relatives and the youngest two, who were born out there in B.C., didn’t know them at all — had never even seen them.”

“That bothered us a lot because family was, and still is, very important to us,” he says.

After four years in B.C., Job decided to go back to Springdale for a visit in the summer of 1976. It was partly a vacation but much of his time home was spent scouting out the job market. There were a couple of possibilities, but the one that interested him most was a distributorship/franchise with Ultramar. Besides distributing gasoline to service stations, along with home heating fuel to Springdale residential customers, Job would also be the supplier for Ultramar distributors in Little Bay Islands and Long Island.

After discussing the matter with Sylvia, Job accepted the distributorship offer and resigned from his job in the chemistry division of the B.C. mining company he had worked for and headed east to begin a brand new life back home in Springdale.

Job worked hard at the distributorship and things went fairly well for a couple of years. In May 1978, a new opportunity arose that held great promise for Job and his family. Job’s brother Fred owned a mineral analytical company and was in expansion mode in the late 1970s.

Fred approached Job about joining his company to work in the laboratory, in a position similar to what Job had done previously in British Columbia.

Fred suggested Job wouldn’t have to give up his distributorship with Ultramar — he could hire a driver and do the administrative work from home.

The Goudie brothers had a deal.

Job hired a driver who was scheduled to start on Monday, May 29, but at the last minute, he learned about a government program that caused him to put things on hold, at least temporarily. Someone told Job that the government manpower department, as it was called in those days, offered a financial initiative to help companies like Job’s distributorship to train new people.

“So, I called the young fellow [driver] Sunday and explained the situation and asked him to hold off for a day or so while I got things straightened up with manpower because to a small business-like mine in those days, every dollar was crucial,” Job says.

The potential driver was fine with the delay, so Job decided he could handle Monday’s deliveries and still have enough time to contact the government people about their training programs.

The first business at hand Monday morning was a delivery to his colleague Rollie (Roland) Weir. Rollie, a former fisherman, was Ultramar’s distributor for Little Bay Islands, but because the islands were too far offshore to construct a bridge or causeway to connect to the Newfoundland mainland, marine traffic was the only means of transport.

Rollie had a small tanker vessel called the Notre Dame that he would steam to Little Bay, near Springdale and Job would fill the tanks for him to take back to the Islands.

“Rollie had what was known as a Grenfell Boat. She was about 70-75 feet long, with the wheelhouse located toward the stern and the forecastle up front. In the middle [amidships] was the hold where he had several tanks installed. I think he had four tanks in total with 3,000 gallons total capacity — two with 1,000 gallons each and two with 500-gallon capacities,” Job explains.

The International Grenfell Association (IGA), based in St. Anthony, traditionally had vessels to travel to coastal communities of northern Newfoundland and Labrador. The vessels were of no specific design because they were acquired through whatever means possible, including donations from shipping companies in some cases. 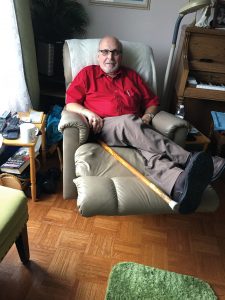 Job Goudie sits in his easy chair at home in Grand Falls-Windsor, October, 2017.

Even when the IGA sold vessels to people like Rollie Weir, the boats often continued to hold the “Grenfell Mission Boat” reference — perhaps out of respect for the good work done by the Grenfell movement. Rollie’s vessel, the Notre Dame, was named Maraval, when it was in service for the Grenfell Mission.

Built in Thomaston, Maine, the Maraval was a well-constructed wooden-hull vessel. Its timbers and planking were made from oak. Gary Newell, a St. Anthony resident who has researched the Grenfell Boats extensively, says he’s heard stories that the oak in the Maraval was so hard you couldn’t drive a nail into it.

“Driving over to little Bay from Springdale I thought the air felt heavy. It was a little misty and foggy and there was little or no wind at all and it seemed the atmospheric pressure was very low,” he recalls.

Perhaps it was a sense of foreboding of what was about to happen.

When Job arrived the wharf in Little Bay at approximately 9 a.m., Rollie and his crewman Ralph King had already docked the Notre Dame and were preparing to have their storage tanks filled with gasoline.

“Rollie was excited that morning,” Job says. “The first thing he told me was that he was going to go back fishing. He said the provincial Fisheries Loan Board had approved his application for a loan to get started again.”

Once the pump hose was hooked up and gauges checked, the business of filling the tanks began. Job, Rollie and Ralph then went into the wheelhouse where it was warm and dry so they could chat in comfort while they waited.

“I could keep an eye on the gauges and all that stuff from inside,” Job explains, adding that Rollie was full of enthusiasm as he talked about his future plans for fishing again.

A few minutes later, the men saw a thick, sooty smoke spewing from a chimney that was attached to an oil burner stove in the forecastle.

Rollie quickly left the wheelhouse and headed down the forecastle steps to investigate the cause of the dense smoke and soot. Job was curious about what was happening, so he went to take a look.

“I sort of casually followed Rollie, but instead of going down into the forecastle, I bent over and peered down through the door to see what was going on. I saw Rollie grab what looked like a five-gallon beef bucket and threw what I assume was water in the direction of the oil stove. The next thing I remember, I was underwater.”

The explosion was heard as far away as Middle Arm, nine kilometres northwest of Little Bay.

Join us next month for Part II of The Survival and Patience of Job.

No Replies to "The Survival and Patience of Job"