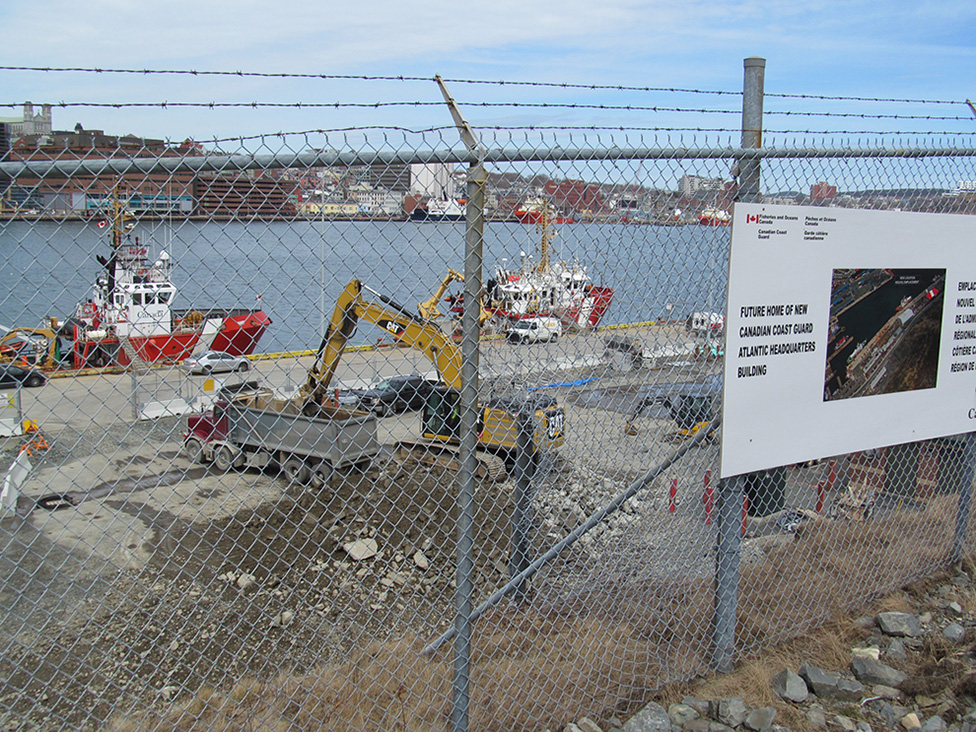 It appeared to be full steam ahead for those onboard when Prime Minister Justin Trudeau’s mandate letter last fall to Fisheries and Oceans Minister Hunter Tootoo directed him, as a priority, to re-open the maritime rescue sub-centre in St. John’s and the Kitsilano Coast Guard Base in Vancouver.

It was a follow-up on a campaign promise prior to the last federal election to reverse a decision by the previous Conservative government to close those facilities.

But while the engines have chugged along steadily toward the re-opening of the Kitsilano base, the motors have been in a holding pattern for the sub-centre in St. John’s.

On Dec. 16 of last year, while in Vancouver, Tootoo reaffirmed the commitment to re-open the Kitsilano facility and posed for a photo op with local officials outside the facility.

During a visit to St. John’s on Jan. 11, however, Tootoo was vague when asked by reporters on when or even if the centre will be re-opened. 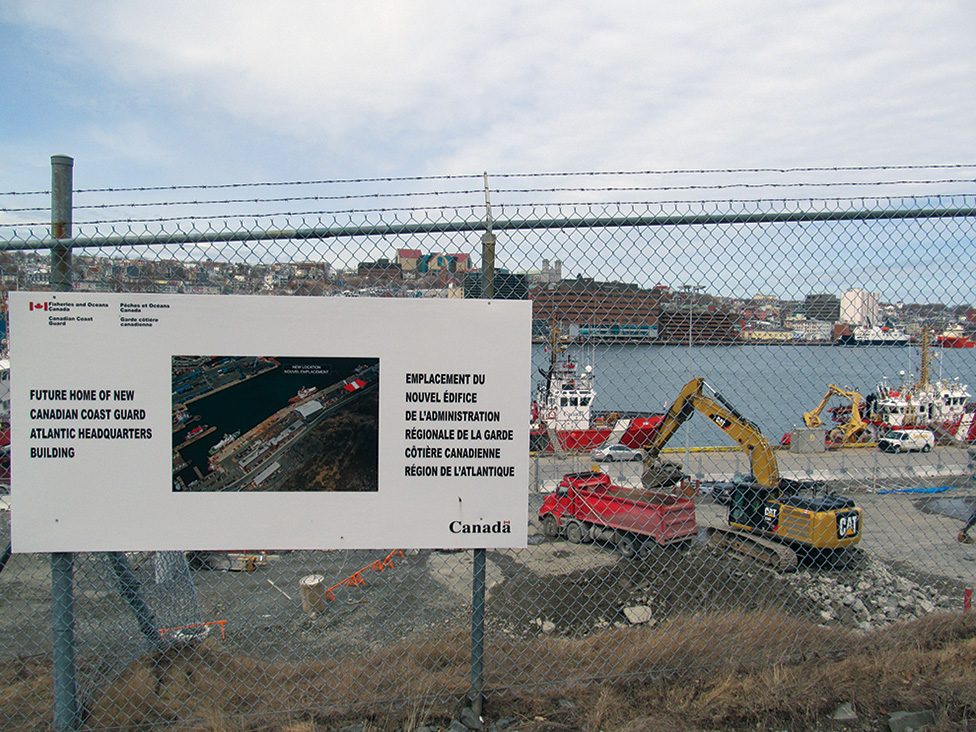 A sign identifies the location were the planned $40-million new building will be constructed. Photo by Glen Whiffen

“I’ve asked my officials to bring forward proposals, ways where we can meet our commitment to Newfoundland and Labrador, as well as the commitment to ensuring that we provide increased safety to mariners here in Newfoundland,” Tootoo said at the time.

When asked directly by reporters if the St. John’s sub-centre will be re-opened, Tootoo replied that “the commitment is in the mandate.”

The federal Liberal government brought down its first budget in March and in it proposed the Kitsilano facility would be provided with “$23.6 million over five years on a cash basis, starting in 2016–17, to reopen the Kitsilano Search and Rescue Lifeboat Station in Vancouver as a Coast Guard Base with enhanced marine emergency response capacity.”

The only thing remotely related to the rescue sub-centre in St. John’s was a sentence that said, “options will be developed over the coming year to enhance search and rescue capacity in Newfoundland and Labrador.” 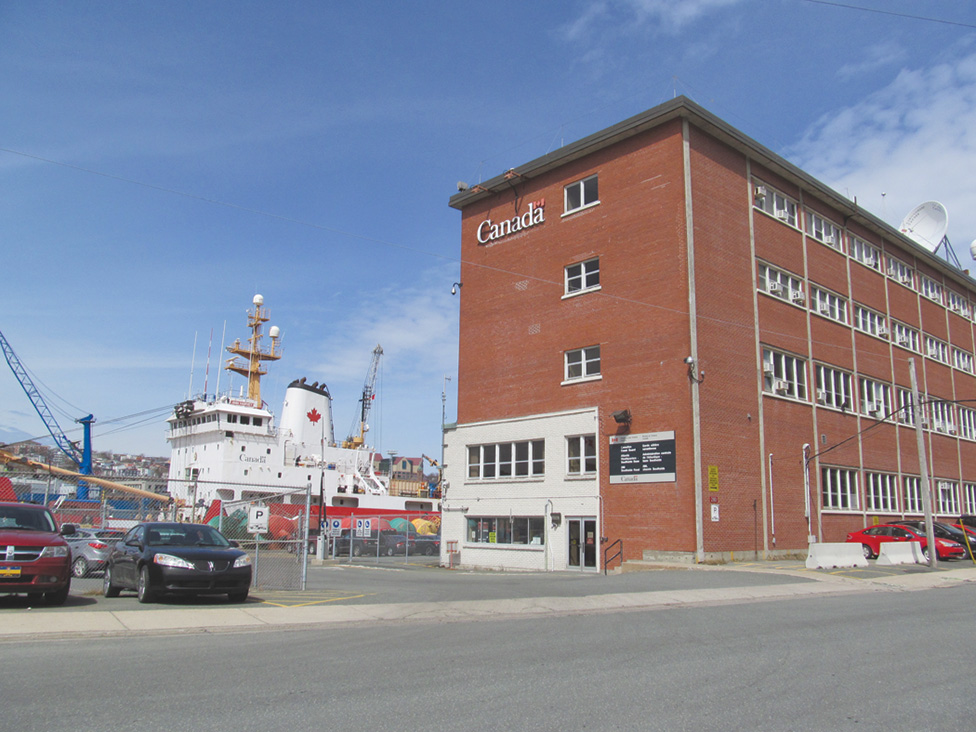 The new building, that will replace the current adjacent facility, is expected to be completed in 2018. Photo by Glen Whiffen

Judy Foote, the province’s federal cabinet representative and federal minister of Public Services and Procurement, told CBC News following the budget that the federal Liberals are as committed as ever to re-opening the St. John’s sub-centre, even though there was no funding or any specific mention of it in the budget documents.

Foote’s office said the minister was unavailable to respond to questions from The Navigator before the magazine’s deadline for this issue.

Tootoo’s office, however, did provide a written response to questions.

The new $40-million building was announced last May and will replace the aged building currently at the site, and will have all the latest technology. The new building is scheduled for completion in 2018.

Tootoo’s office stated: “Construction is being planned for a new Coast Guard facility immediately adjacent to the current building that housed the St. John’s Marine Rescue Sub-Centre (MRSC), which raises the question as to whether or not the two operations should be integrated into one, what the overall configuration of staff and equipment would be, at what cost and within what timeframe. A number of proposals which examine both response capabilities and configurations are being considered at this time. Minister Tootoo will review them with departmental officials to ensure the best option is selected.”

He said, however, he is concerned that more is not being done to get the sub-centre back in operation sooner.

“Every day, every month, every year that goes by I get nervous about where it’s going to go,” Wiseman said. “I’m actually reassured by the commitment by Judy (Foote) and so on that they are going to do what they say, but what makes me really nervous is the senior level bureaucrats who are opposed to this. I know there’s been an awful lot of push back from these people.”

Wiseman noted that, from a physical infrastructure stand point, the sub-centre is still there at the current building in St. John’s. He agrees it can’t be re-opened overnight as it would need some new hardware and software and other equipment, but noted there are a number of trained former rescue co-ordinators still working in other areas of the Coast Guard who would be ready to return to the sub-centre.

When the sub-centre closed in 2012, there were 12 rescue co-ordinators working there at the time who were either transferred to other areas of the Coast Guard, or retired.

The statement from Tootoo’s office also noted that: “Options are being developed and analyzed by operational and technical experts within the department, and there is no specific timeframe being set until analysis of the options is complete.”

The language fails to confirm the sub-centre, as it existed, will be reopened.

“Any changes to the harmonized search and rescue (SAR) co-ordination configuration of Joint Rescue and Co-ordination Centre (JRCC) will require careful consideration and consultation with National Defense to ensure the highest standards of safety and search and rescue capability are maintained,” the statement further said.

Wiseman noted that Rear Admiral John Newton, responsible for the JRCC in Halifax, was reported in the media saying that while he has no problem with the federal government’s decision to reopen the sub-centre in St. John’s, he feared there could be problems separating the groups that co-ordinate search and rescue missions — marine and air response teams — which have been together since 2012 in Halifax, and that he had to work with Tootoo to ensure there is no downgrade in the service by doing so.

Wiseman said those remarks infuriated him.

According to the Department of National Defence website, the sub-centre in Quebec City is responsible for co-ordinating marine SAR activities within its area and works with the aeronautical co-ordinator at JRCC Halifax to provide assistance to aeronautical SAR activity within their area.

When it was announced the sub-centre in St. John’s was to be closed in 2012, there was an uproar of opposition in Newfoundland and Labrador. There were public rallies and protests, petitions circulated, calls made to federal MPs and ministers and angered rants on call-in radio shows. There were letters sent to local and national newspapers from a wide range of individuals and groups, and the provincial government at the time also tried to pressure the federal government to reverse the decision.

Those groups were buoyed by the campaign promise by the Liberal Party prior to the last federal election.

Training with the Canadian Coast Guard