As a result, CIFHF members recently participated in seven workshops organized in conjunction with First Nations, the Department of Fisheries (DFO), Department of Justice, Crown-Indigenous Relations and Northern Affairs Canada.

CIFHF stated that its members have worked alongside Indigenous harvesters for decades, in training and mentoring, marketing, species advisory committees and science and research.

“It is because of this working relationship that our members understand the need for respectful dialogue between commercial and Indigenous harvesters and why CIFHF is calling for a joint working group to be established with CIFHF, DFO and Indigenous leaders to review DFO’s fisheries reconciliation strategy and governing principles,” the organization said in a press release.

“The reconciliation workshops have opened up a dialogue that have helped members understand the complexity of reconciliation. There has been a lot of active listening and deep questioning in these workshops,” said Melanie Sonnenberg, president CIFHF.

“These workshops have provided a valuable opportunity for all parties to exchange, learn and ultimately, become more informed. Fisheries bring much more than economic value to our communities. They provide a social and ecological connection to the sea that underpins the cultural fabric of our coast. Our communities need our fisheries to remain sustainable for current and future generations. These workshops — which facilitated meaningful dialogue between fish harvesters and government — are a critical step in developing long-term solutions for a way forward,” said CIFHF member Jim McIsaac.

Newfoundland and Labrador’s Minister of Fisheries, Forestry and Agriculture was one of many offering condolences following the death of a crew member on the seiner Eastern Pride on December 1.

“I extend my sincere condolences to the family and friends of the Eastern Pride crew member who passed away while onboard the fishing vessel, which ran aground near Cox’s Cove on December 1. To his fellow crew members who have lost a trusted and treasured friend — please know we are very thankful you are safe, and truly sorry for your loss. Work on the sea is part of the lifeblood of Newfoundland and Labrador, and tragic events like this are a harsh reminder of the risks involved in this challenging but vital profession,” said Minister Elvis Loveless.

The Eastern Pride, carrying a crew of eight and based out of the Curling area of Corner Brook, ran aground on Eagle Island, near Cox’s Cove, early morning on December 1. One of the men, in his 60s, died aboard the ship.

The RCMP later confirmed the man, who was a resident of Port aux Basques, had died of natural causes.

The Atlantic Canada Opportunities Agency (ACOA) recently announced that it will be providing a repayable contribution of $1 million to Pennecon Hydraulic Systems Limited to help expand its business to capitalize on emerging opportunities in the aquaculture industry.

This investment has allowed the company to design and manufacture an aeration system for fish cages that is specifically designed for Atlantic Canada’s unique coastal environment. The system will increase oxygen levels when water temperatures rise, which will improve overall fish health and prevent future die-off.

Pennecon Hydraulic Systems Limited is contributing $787,120 towards the project.

Based in Paradise, N.L., Pennecon Hydraulic Systems operates in industries such as oil and gas, industrial, mining, marine, military and agriculture. It recently expanded into the aquaculture industry with crane sales, service and maintenance. The company will further diversify its operations with innovative, custom-built aeration systems to help the local aquaculture industry improve fish health.

The Fisheries Council of Canada (FCC) and the Canadian Aquaculture Industry Alliance (CAIA) recently announced their support for the new Ocean Action Agenda released by the High Level Panel for a Sustainable Ocean Economy (Ocean Panel).

“Their mission of building a sustainable ocean economy balancing effective protection, sustainable production and equitable prosperity is in alignment with the goals of the Canadian fish and seafood industry and our own Blue Economy Strategy 2040,” the groups said in a press release.

The Ocean Panel, composed of 14 serving world leaders, including Prime Minister Justin Trudeau, has put forward a new ocean action agenda underpinned by sustainably managing 100 per cent of national waters. This agenda is built upon knowledge and science, transformative recommendations and action. “Similarly, FCC and CAIA, the national associations representing the wild-capture and farmed seafood industries respectively, recently released Canada’s Blue Economy Strategy 2040, a vision and action plan to position Canada as a global top three producer of the best, most sustainable fish and seafood by 2040. The plan intends to capture the opportunity presented by Canada’s Blue Economy Strategy mandate and offers guidance on achieving sustainable, ocean-led economic growth.”

“The Ocean Panel’s new Ocean Action Agenda positions the ocean as an essential part of solving global challenges. The Canadian fish and seafood industry shares that belief,” said Paul Lansbergen, President, FCC. “Our Blue Economy Strategy 2040 puts a plan on paper for Canada to follow to be a part of that worldwide movement.”

CAIA President and CEO, Tim Kennedy, is a member of the Advisory Network to the Ocean Panel.

“Being involved with the High Level Panel’s Advisory Network has impressed me with their deep research agenda and concrete recommendations. Canada can and should be playing a leading global role to realize the opportunity of the Blue Economy,” said Kennedy.

“Seafood — both farmed and wild — will play a central and increasingly important role in realizing human and planetary health. Our world and Canada will benefit greatly with acting on these recommendations.”

Enhancing Marine Safety on the Coast of Labrador

Through the Oceans Protection Plan, the Government of Canada is working in partnership with Indigenous coastal communities to improve marine safety and responsible shipping to protect Canada’s marine environment.

Now, under year three of the program, the Minister of Fisheries, Oceans and the Canadian Coast Guard, Bernadette Jordan, announced $461,298 for the Innu Nation communities of Sheshatshiu and Natuashish to purchase a search and rescue boat for each community, as well as related equipment.

Through new equipment and training, auxiliary members are better equipped and prepared to respond to marine emergencies, helping to enhance the safety of their communities and the surrounding waters and coasts.

“The Innu Nation is pleased to partner with the Canada Coast Guard under the Community Boat Program to establish the Innu Coast Guard Auxiliary in Sheshatshiu and Natuashish. These new boats have been named for the late elders, Edward Piwas, a long-serving member of the Innu Nation’s board of directors, and Antuan Penashue, the first Innu Fishery Guardian from Sheshatshiu. Innu Nation members are now certified with marine environmental response and marine safety training, provided in partnership with the Canada Coast Guard. We look forward to continued collaboration with Canada to apply our tradition of Nakuatenita, Innu stewardship of the land and water, and to building Innu capacity and resources,” stated Deputy Grand Chief Mary Ann Nui, Innu Nation.

The Indigenous Community Boat Volunteer Pilot Program is a four-year pilot program, which began in 2017. The Coast Guard continues conversations with coastal Indigenous communities to identify those that are interested in participating in the future. 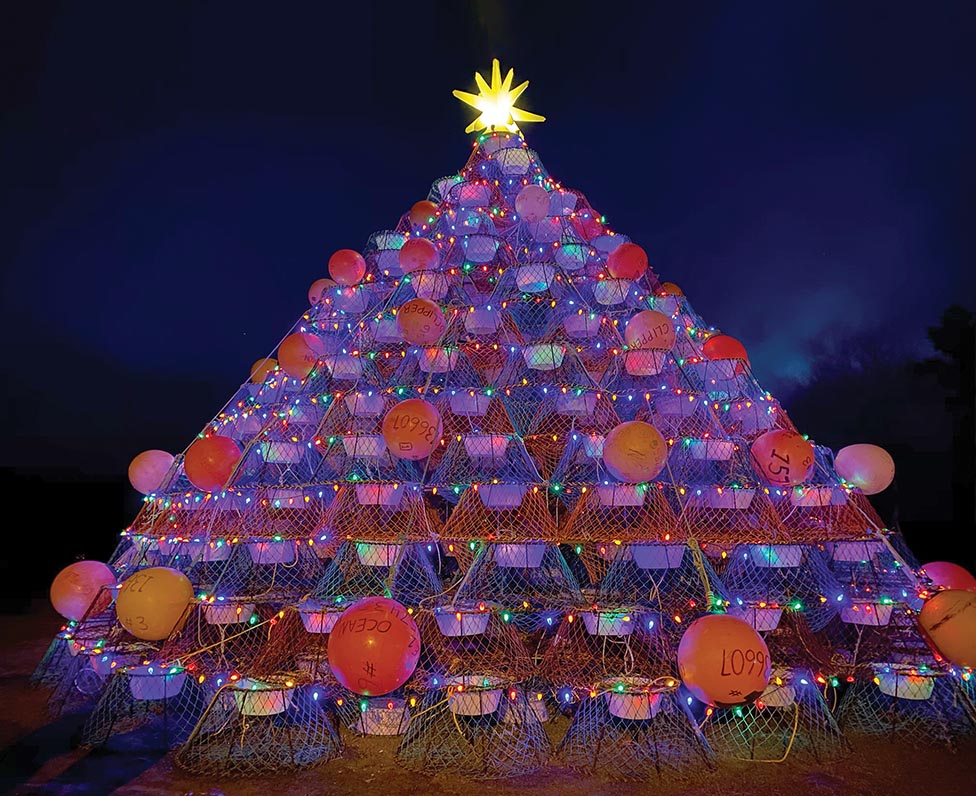 Over 450 pots — a typical boat load of pots brought to the crab grounds at the beginning of the crab season — were assembled for Christmas next to St. Mark’s Heritage Church and the Canon Richard’s Tea Room.

The area is already famous for Christmas lights — with the annual boat lighting in Port de Grave Harbour with its display of close to 70 fishing boats fully decked out in Christmas lights and neighbouring Bay Roberts with its award-winning Festival of Lights.

Iris Petten, Chair of the Tourism Committee of the Heritage Society, is proud that people of all ages in the community built the tree from crab pots and decorative fishing gear shared by local fishing enterprises.

The crab pot Christmas tree was in place until Old Christmas Day on January 6.

The federal government recently announced a total of $547,500 in repayable contributions to Dartmouth Ocean Technologies and Sedna Technologies, which will allow the companies to pursue technology development and commercialization projects.

Dartmouth-based ocean technology startups, Dartmouth Ocean Technologies and Sedna Technologies are developing and commercializing sensor solutions to support aquaculture and other ocean enterprises. Both companies are located at the Centre for Ocean Ventures and Enterprises (COVE), a collaborative hub for applied innovation in the ocean sector.

When Will We Ever Learn?