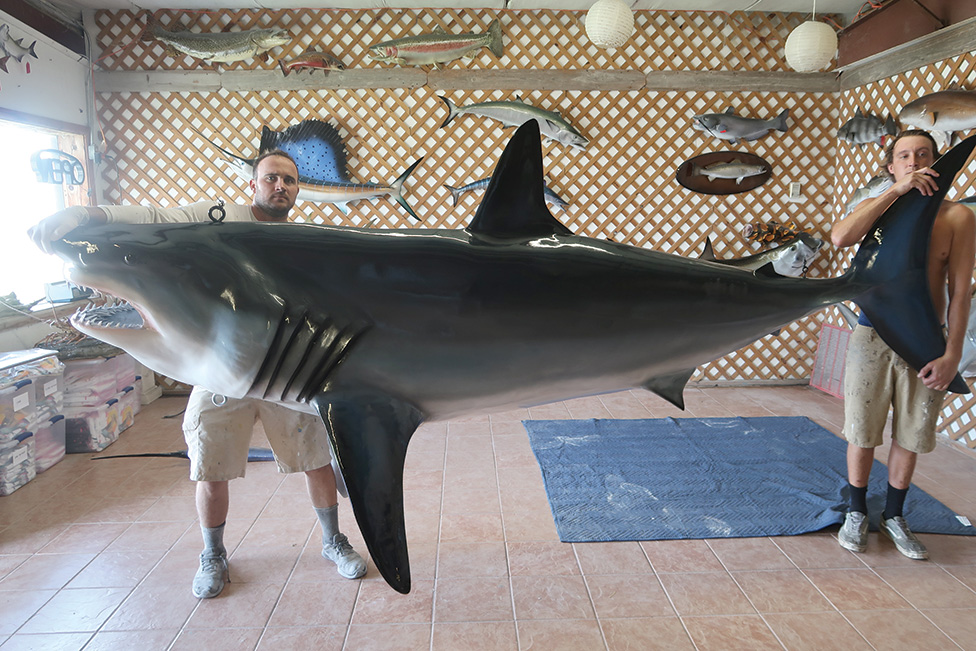 Above photo: Employees at Brown’s Taxidermy in Florida pose with the life-size fibreglass replica of the Canadian record-setting, shortfin mako shark caught during the 2004 Yarmouth Shark Scramble. Contributed photo.

Two signature southwestern Nova Scotia fishing events have been cancelled this year due to the COVID-19 pandemic.

The Yarmouth Shark Scramble and the Wedgeport Tuna Festival and Tournament are both off the books for 2020.

“It is with heavy hearts that we have made the decision to cancel this year’s 2020 Yarmouth Shark Scramble,” reads a post from organizers on the website.

“Given the current economic situation and the unknown future, it would not be the time to ask for more from people and sponsors whom we appreciate so much. We’ll all ride this out, hopefully, come out intact and make the 2021 Yarmouth Shark Scramble better than ever. May God bless and keep everyone safe.”

Shark Scramble co-founder Bob Gavel said the impact of COVID-19 on local businesses was the main reason for cancelling the Scramble.

“The economic pressures placed on business at this time was great enough. They have been so supportive over the years and we did not want them to feel any obligations to help us out at this time, so we felt it was the right thing to do,” he said.

Gavel said they have had “numerous people contact us and although they felt bad that it was cancelled for 2020, they understood and hope it will be back next year.”

Scramble organizers have received the fibreglass, life-size replica of the Canadian record-setting shortfin mako shark caught during the 2004 Yarmouth Shark Scramble by Jamie Doucette. The mako weighed in at 1,084.28 pounds, was 11’4” in length, seven feet around and estimated to be 21 years old.

The plans are to mount and display the replica at Rudder’s Wharf on the Yarmouth waterfront as part of next year’s Yarmouth Shark Scramble celebrations, said Gavel. “We feel it will be okay to hold it by next summer,” he said.

“I’ll be surprised if the boats go fishing,” said Brandon Doucette, president of the Wedgeport Tuna Tournament Association, in an interview.

“I know there’s been a lot of resurgence of openings in Nova Scotia, however it’s hard to plan a month and a half away. Things could change quickly. We’re still looking at options and seeing if there is a way we can make it work.”

While proceeds from the fishing tournament landings supports the Wedgeport Tuna Museum and the festival, “we’re looking at the other side too,” said Doucette.

“Almost every business has been affected by the pandemic, so if we can get by this year, we don’t want to take advantage of our sponsors. We assume they have had losses and reduced revenue this year and it’s hard to say what the markets, either in the U.S. or Japan, if there’s another wave at the end of August, its hard to say what the tuna markets are going to look like at that time too.”

Doucette said the Association is planning a number of virtual activities on social media throughout the summer, such as weekly trivia, to keep the public engaged. As well, the Association will be further chronicling the tournament’s rich history that dates back to the 1930s by interviewing some of the older people in the village that remember the days when the rich and famous came to Wedgeport for a chance to catch a giant bluefin.

Last year marked the 16th year for the Wedgeport Tuna Tournament and the 21st year for the Yarmouth Shark Scramble. The South West Nova Tuna Association allocates bluefin tuna quota to the tuna tournament each year. The largest bluefin landed since the tournament’s revival in 2004 was caught in 2014 by the Atlantic Angler, weighing in at 796 pounds.

The Saga of Recommendation M16-05