Stevie MacInnis of Arisaig, N.S., went into the water near Murphys Pond. His body was later recovered and brought to Port Hood.

Community members say MacInnis was the longest-serving fisherman from the 23 boats that fish out of Arisaig and a teacher and mentor to the younger generation of fishermen.

The investigation into the tragic incident is ongoing.

Three fishermen were rescued Sept. 12 by the Gulf ferry the Leif Ericson after their fishing vessel caught fire in the Cabot Strait.

The 14-metre Sulia’n, owned by We’koqma’q First Nation, was about 90 kilometres northeast of Sydney, N.S., when the crew discovered a fire in the ceiling of the washroom, apparently caused by the boat’s exhaust.

The captain, Blaine Hamilton and two crew, Christian Phillips and Levi Poulette, had set out from Cape Breton to fish redfish.

The Marine Atlantic ferry Leif Ericson, which was south of the burning vessel en-route to Port aux Basque and another vessel, the San Alessio, responded to the mayday from the Sulia’n.

The Transportation Safety Board is investigating the incident. 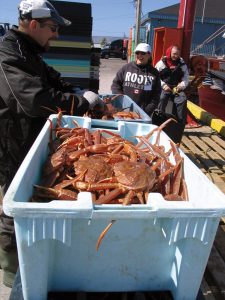 The Alaska Department of Fish and Game recently announced that the Bering Sea snow crab quota has received a 50 per cent increase over last year’s total.

According to SeafoodNews.com, the increase is not that much, considering last year’s quota was the lowest quota since 1971. However, this year’s total allowable catch (TAC) of 27.581 million pounds will afford the crab industry an improved season when fishermen started pulling gear at noon on Oct. 15 in the Bering Sea district.

Snow crab or Opilio crab TACs had declined dramatically in the four years prior to 2017. The 2017 surveys showed improved recruitment, but fisheries managers kept the snow crab TAC low last year to aid in the population’s recovery.

A higher quota for snow crab this year could have significant market implications.

Lansbergen recently outlined the challenges facing the sector to the members of the House of Commons Standing Committee on Finance, who are in the process of developing recommendations for the 2019 Federal Budget.

“Canada’s fisheries and seafood sector is a vital economic driver, providing direct employment for almost 80,000 Canadians, many in remote, rural and Indigenous communities,” says Lansbergen. “Sustaining those jobs, and building opportunities within those communities where, in many cases, the fishery is the only game in town, depends on restoring lost investor confidence.”

Recent policy decisions ranging from involuntary relinquishment of fishing quota allocations under the government’s reconciliation agenda, significant expansion of marine protected areas and others have raised questions about stability of access to fisheries, which has given rise to increased investor caution.

“Canada’s fisheries enjoy some incredible advantages that should have us positioned to win. We have a wide variety of high-quality harvested species in our waters, a rigorous food safety regime, top-notch labour standards, inclusive fisheries and collaboration with Indigenous partners and we are world leaders in third party certifications for sustainable fisheries practices,” says Lansbergen.

“Despite advantages we’re slipping. Whereas 25 years ago Canada’s was the world’s number one exporter of seafood, we’re now eighth.

In his remarks, Lansbergen called on the Government of Canada to work with the fisheries sector and consult early when it develops policy to ensure its decisions reflect input and expertise from business. Measures such as increasing Indigenous participation in fisheries — which FCC supports as a policy objective — should be based a “willing-buyer-willing-seller model.”

Likewise, FCC called for renewed investments in science to ensure timely and regular fish stock assessments to improve fisheries management and promote evidence-based conservation practices. Lastly, FCC informed the finance committee many regulations affecting Canada’s fisheries are over 40 years old and are a drag on investment.

“We can’t make investments in basic things like LED lighting around vessels like most maritime countries, including the United States — because we’re stuck to a set of rules that are relics from a bygone era. We can do much better, but the Government of Canada needs to be a partner if we’re going to succeed.” 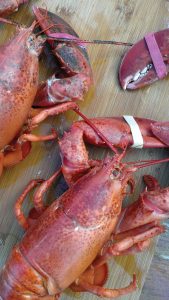 With the contraction of the Chinese lobster supply from the U.S., the supply from Canada has ballooned, according to SeafoodNews.com.

In the past 12 months, Asian markets have received seafood from Halifax’s Stanfield International Airport on a weekly basis. And the lobster export has jumped by 63 per cent on average compared with the same period last year.

Air Korea has provided cargo transportation service to Halifax for several years now. China’s cargo airline, Suparna Airlines, has also been a provider of such service to Halifax since 2017. This August, two more flights from Halifax to Changsha city of China were added. Each can carry about 120 tonnes of seafood to China every time.

According to Air Canada, apart from these cargo aircraft, it also has a plane to fly 20,000 kg or more of seafood from Halifax to Montreal every day.

Moncton’s Romeo LeBlanc International Airport has also been quite occupied with its lobster delivery business recently. Although it only flies lobsters to China occasionally during Chinese festivals and other special days, Kalitta Air has also started cargo transportation directly from Moncton to Asia in August.

The Government of Canada, along with eight other States and the European Union, recently took a pivotal step towards oceans management and conservation by signing the Agreement to Prevent Unregulated High Seas Fisheries in the Central Arctic Ocean.

Canada, Norway, Russia, the United States, China, Iceland, Japan, the Republic of Korea, the European Union and Denmark in respect of Greenland and the Faroe Islands, have signed this important, legally-binding agreement.

It prohibits commercial fishing in the high seas portion of the Central Arctic Ocean for at least 16 years after entry into force. The Agreement covers an area about the size of Quebec and Ontario put together.

This historic effort marks the first time an international agreement of this magnitude has been reached before any commercial fishing has taken place in a high seas area.

Not only does it give the parties time to develop a greater understanding of this marine ecosystem and the species there, it will also inform possible conservation and management measures that might be needed in the future.

Canada and the other parties have also committed to a program of joint scientific research and monitoring to gain a better knowledge of Arctic Ocean ecosystems and the potential for sustainable fisheries in the future.

International interest in the Arctic continues to grow as climate change and the melting sea ice opens up vast areas of this once frozen landscape.

The shrinking ice cover is affecting the traditional lifestyles of the Indigenous peoples of Canada’s North, a fact emphasized by Inuit Circumpolar Council during the negotiation of this Agreement.

The Gael Force Group recently revealed its plans to expand its business overseas with the supply of a full and established range of marine equipment, technology and services to Atlantic Canada’s aquaculture market.

The Gael Force Group, established in 1983, is a leading Scottish manufacturer and supplier of equipment, technology and services to aquaculture and other marine markets.

The company plans on investing in Newfoundland and Labrador and establishing a new base to support the dedicated servicing of fish farms in the province where large growth in salmon production is currently being projected.

The move forms a major part of Gael Force’s current strategic plan which involves entering into overseas aquaculture markets. This year, the company has been conducting a series of comprehensive market research visits into the current and future opportunities on the eastern side of Canada.

Manomet, a non-profit organization headquartered in Plymouth, Massachusetts, has been awarded $267,440 by the NOAA Saltonstall-Kennedy Grant Program to “expand work to develop a lucrative green crab fishery in New England.”

“Utilizing an invasive species to diversify fisheries resources may ultimately enhance the future resiliency of New England’s coastal communities and could serve as a unique example of how to mitigate and adapt to the ecological and socioeconomic impacts of climate-drive change,” Manomet Senior Fisheries Scientist Marissa McMahon said in a statement.

“We are honoured to have been chosen by the Saltonstall-Kennedy program.”

European green crabs were introduced to the U.S. in the early 1800s. The invasive species has been thriving with the warming of the water in the Gulf of Mexico. McMahon is hopeful that Manomet will be able to replicate Italy’s lucrative soft-shell green crab fishery with the funding from NOAA.

A study examining how women contribute to the survival of both fishing families and the fishing industry was recently launched by Memorial University of Newfoundland. The research project, Women in Fisheries, is collecting data on both sides of the Atlantic — in Newfoundland and Labrador and in the U.K. — and intends to shed light on women’s roles, identities and well-being.

Dr. Madeleine Gustavsson, a visiting post-doctoral fellow at Memorial University and a research fellow at the University of Exeter’s European Centre for Environment and Human Health, is leading the study and believes its timing is crucial. 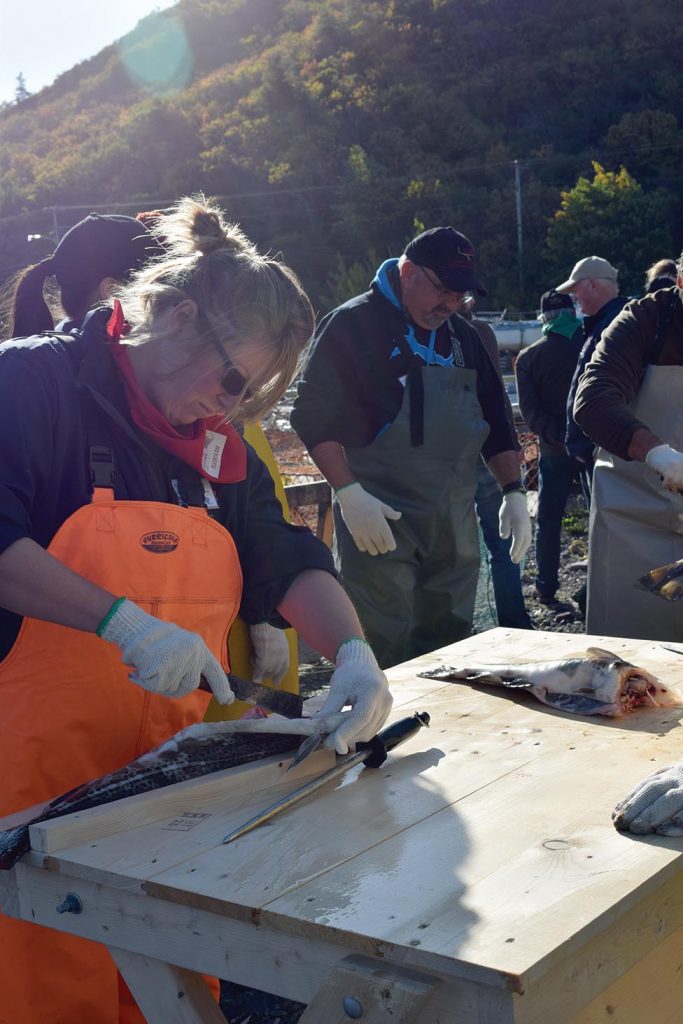 “By failing to prioritize this industry, many believe the U.K. government has left the communities that depend upon it vulnerable.”

Women in Fisheries is also hoping to understand how small-scale fishing families (those using boats under 10 metres in length) are adapting to a changing environmental and economic climate.

“Listening to women’s stories is a central part of this research and the new website provides information about how people can sign up and take part,” said Gustavsson, adding that they are particularly interested in hearing from women on the Avalon and Burin peninsulas within the inshore/small boat sector.

The site features a regularly updated news section where people can follow the project’s progress, read the latest research and discover other efforts to improve recognition of women in fisheries on local and international levels.

Funded with support from an Economic and Social Research Council (U.K.) new investigator grant, the project is also working closely with the small-scale fisheries practitioners and advocacy groups such as the European Network of Women in Fisheries and Aquaculture (AKTEA), the Low Impact Fishers of Europe (LIFE) and the Coastal Producer Organization.

The Government of Nova Scotia and a leading Nova Scotia seafood exporter have been recognized for achieving commercial success in China.

Clearwater Seafoods was given the gold award for outstanding e-commerce achievement, at the Canada China Business Excellence Awards in Toronto, Wednesday, Oct. 3, while the Government of Nova Scotia received the outstanding achievement silver award for its marketing work in China, which includes the Nova Scotia Seafood brand.

“Our trade with China has been on the rise in recent years and we are committed to pursuing opportunities that will benefit our economy and create more jobs for Nova Scotians,” said Premier Stephen McNeil.

“I extend congratulations to Clearwater Seafoods and all our partners who have been instrumental on our trade missions as we work to advance economic opportunities and investment in our province.”

Seafood exports to China have increased significantly in recent years, from $14 million in 2009 to $387 million in 2017.

Exports from Nova Scotia to China, the province’s second-largest trading partner, totalled $611 million in 2017, compared to $64 million in 2008.

In April 2016, Nova Scotia introduced Partnering for Success: The Nova Scotia — China Engagement Strategy, aimed at enhancing the province’s relationship with one of the world’s fastest growing market.