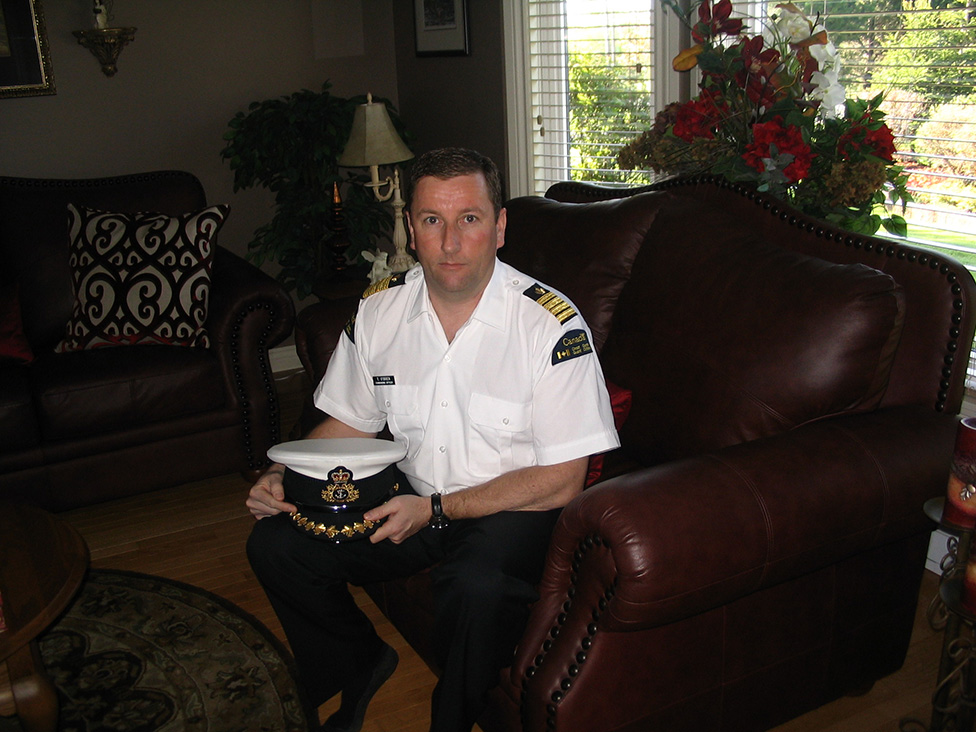 A Captain For All Seasons

And, according to Barry Hawkins, his first cousin and close friend, Tommy was as smart as they come.

He was the youngest ever appointed captain with the Canadian Coast Guard, achieving that status in 1993 at the age of 28, just nine years after joining the Coast Guard as a deckhand.

Tommy grew up in Cape Broyle, Newfoundland, on the southern shore of the Avalon Peninsula about halfway between St. John’s and Cape Race.

Although the town of approximately 400 is a fishing village, Tommy never fished for a living but he loved being “on the water” and he knew at a young age that he was destined for a life on the sea.

After graduating from high school, Tommy studied nautical science in St. John’s, taking summers off to go back home to work in his uncle’s fish plant and earn money for the next semester at the Marine Institute.

For the easy-going teenager, nautical science was a breeze; in fact, Barry Hawkins says Tommy made it all look easy.

“What was difficult for many others to grasp was easy for Tommy,” Barry says.

“There was an older man from home studying the same courses for his master mariners at about the same time Tommy was doing his and Tommy would help this other man. I remember that man telling me that it was difficult for him but if he was only half, or even quarter as smart as Tommy, he wouldn’t have any problem with it.”

Barry says Tommy never had a lot of hobbies but he liked outdoor activities.

Barry shared another memory of Tommy during his school years.

“Tommy was raised by our grandmother and they had a house full of kids — kids of all ages so when Tommy needed to concentrate and study, he’d come over to my house because it was quiet there — there was only me and my sister. I remember my mother giving me a bit of hard time about that. She’d say; ‘Tommy is in there studying and at the books and you’re out there beatin’ the path’ — her way of saying I was beatin’ around town doing nothing,” Barry laughs.

Barry’s mom had no way of knowing then but Barry also did well and he also made a career with the Coast Guard as a marine engineer. Tommy and Barry worked alongside each other on the same ships in later years, sort of; Barry would be in the engine room while Tommy was on the bridge of the ship.

As part of his nautical science studies, Tommy needed sea time to add to his credits, so at the end of his second year, he applied for positions onboard a couple of ships. Meanwhile, he went back to work at the fish plant in Cape Broyle that summer while he waited for a response. He didn’t have to wait long. Barry said they were on their way back to work at the plant after lunch one day and Tommy said he had some news to tell him.

“I’ve got to quit workin’ here at the plant because I just had word from the Coast Guard that I have a job with them,” he said.

Tommy’s grades and excellent recommendations impressed the Coast Guard brass and they didn’t hesitate to hire him right away. At age 19, Tommy O’Brien was on his way to what would become an accomplished marine career.

Coast Guard rarely puts anyone on the bridge in the beginning unless they’ve completed several years of studies and have done a lot of sea time. Many young men and women, who get a job with the Coast Guard, stay with them for their entire career.

For someone who obviously had officer ambitions, it is important that he/she is fully acquainted with every aspect of ships and the role Coast Guard plays in carrying out everyday duties at sea. Unlike tankers, freighters and other commercial ships, Coast Guard captains have to be prepared for everything from installing navigational aids, ice breaking duties to search and rescue missions or seizing ships at sea.

Although he had a nautical sciences diploma at just 19, Tommy didn’t mind starting as a deckhand and was more than willing to work his way up to the bridge from there — knowing that he needed a lot more study to earn various tickets as well as a lot of sea time under his belt.

Tommy had just several months’ duty at sea as deckhand on the ship John Cabot when one of his most memorable experiences in his 30-year career with the Coast Guard occurred.
The John Cabot was a large cable ship transiting the Atlantic Ocean frequently and when an Air India aircraft exploded and crashed into the sea south of Ireland on June 23, 1985, the John Cabot was called on to help in the investigation and recovery process.

Air India Flight 182, operating between India and Canada, was the target of a horrific terrorist bombing that killed 329 people. A long and painstaking investigation was launched immediately.

The John Cabot began combing the area, using its underwater cable-laying and repair technology to take video of the debris on the bottom and shooting thousands of still photographs to assist in the investigation. Over the month of July, the tedious process of mapping the wreckage distribution was carried out. 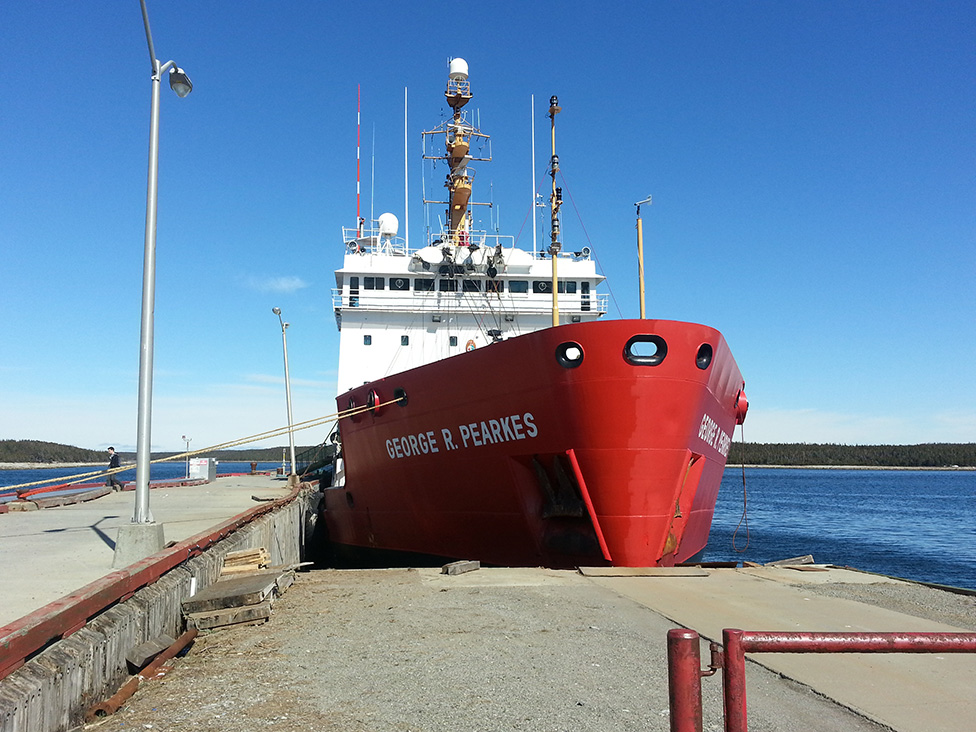 Tommy O’Brien’s command was on the icebreaker George R. Pearkes.

Working on a project that was swirled in international intrigue was an adventurous mission for young Tommy O’Brien and to top it off, on the way back home to Newfoundland, the rookie seaman also experienced some of the roughest weather of his career.

Barry remembers Tommy telling him about the storm that smashed out several windows on the large 280-foot cable ship. For a young guy just starting his marine career, 1985 was a baptism by fire for Tommy.

Twenty years later, on May 29, 2005, Tommy was front-row-centre in another international event. He was on the bridge of the patrol vessel Leonard J Cowley for the seizure of the large Portuguese fishing vessel Santa Mafalda and the arrest of the ship’s master who was charged with fishing within Canada’s 200-mile limit without authorization.

The Cowley escorted the Santa Mafalda, the captain and the vessel’s 31-man crew to port in St. John’s.

Following his first year at sea on the John Cabot in 1985, Tommy concentrated on progressing through the various at-sea stages of the Coast Guard hierarchy.

He moved from ship to ship and went up the ladder from deckhand status to bosun to mate, all the while studying to earn his master mariner’s certification, which he acquired in 1993.

In February 2000, at age 35, Tommy O’Brien made his first trip as commanding officer of a Canadian Coast Guard ship. And it wasn’t just one of Coast Guard’s smaller near-shore vessels; it was the offshore patrol vessel Cape Roger. At 205 feet, the Roger has a crew complement of 19 and is equipped to spend up to six weeks at sea.

For the next 15 years Captain Tommy O’Brien sailed on several Coast Guard ships based in Newfoundland. Those include the Harp, J E Bernier, Leonard J Cowley, Cygnus, Grenfell and his last ship was the icebreaker George R Pearkes.

Sadly, Captain Tommy O’Brien passed away in March 2015, at age 50. His passing ended an outstanding 30-year career with the Canadian Coast Guard.

Captain Tommy was highly respected and very well liked. Everyone who sailed with him, regardless of his rank at the time, speak highly of his professionalism and his easy-going and confident manner.

He was truly a captain for all seasons.

Correction:
In last month’s Sea Folk we featured Nora Richardson from Nova Scotia. In one of the photos of Norma standing alongside a man, we incorrectly identified the man as her husband Glen. In fact it was former Nova Scotia Fisheries Minister Ron Chisholm.

No Replies to "A Captain For All Seasons"