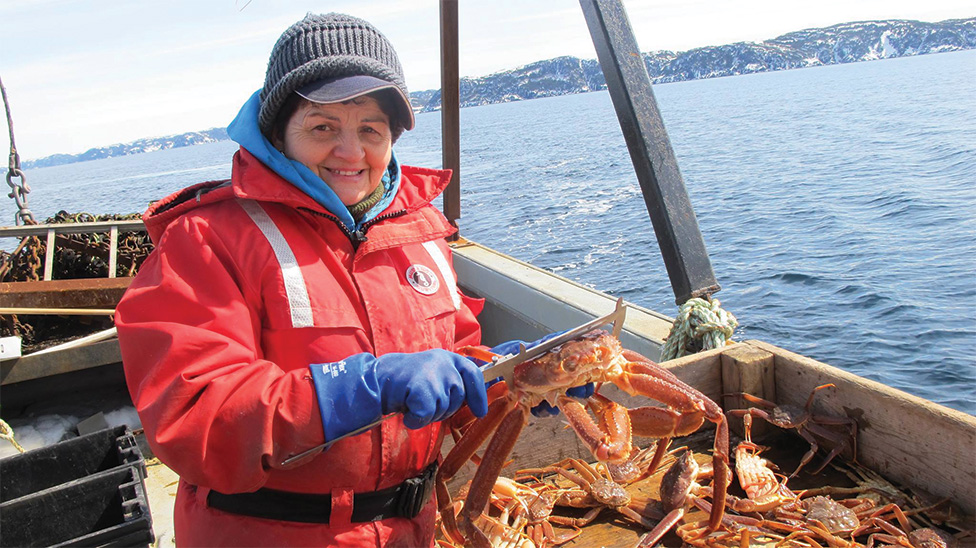 Most people who know Mildred Skinner from Harbour Breton, located on Newfoundland’s south coast, would agree with her self-assessment that she is a people person.

Now in her 50s, Mildred has been volunteering since she was a teenager.

After a few different jobs as a young woman, including a stint in the retail business, a cook, waitress and Canada Post employee, Mildred later became a full-time fisherwoman which in turn led to related volunteer positions such as an inshore council representative with the Newfoundland and Labrador Fishermen’s Union (FFAW) and member of N.L. Fish Harvesters Safety Association as well as MED and first aid instructor in fisheries training programs.

Four years ago she became a fisheries stewardship advocate and most recently, a political candidate.

Mildred, a mother of four children, is well-known as one who cares deeply about rural Newfoundland and Labrador people and their culture.

Mildred has long been an advocate for ordinary people and today, she is more committed than ever to her advocacy work and wonders if her future conduit for that work will be through the political process.

She ran in the November 2015 provincial election campaign in Newfoundland as the NDP candidate for the district of Fortune Bay-Cape la Hune. She had been a long-time Liberal supporter but lost her nomination bid for the party she served with for years but soon afterwards, NDP Leader Earle McCurdy called to ask if she would run for his team.

As a long-time friend and colleague of McCurdy who is a former president of the FFAW, Mildred eventually accepted the invitation.

She finished a distant third in the race, but the process sparked her political interest and she says voters in her district haven’t heard the last of her.

Born in Harbour Breton, Mildred’s dad was a postmaster/telegraph operator, a job that, in those days, was often transient. 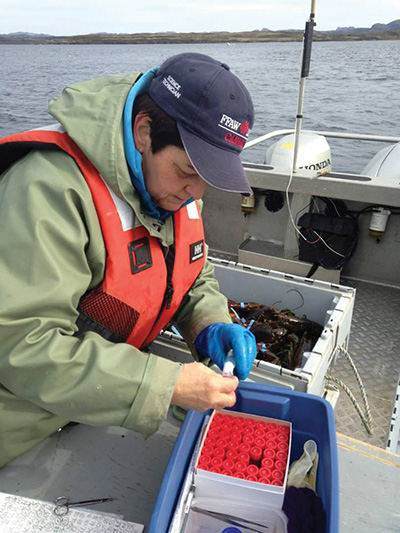 “They used to move postmasters around so we lived in Harbour Breton and then in different places, including Greenspond and Petite Forte, before moving back to Harbour Breton again,” she explains.

Mildred married Alex Skinner, an inshore fisherman who had resettled to Harbour Breton from Sagona Island in the late 1960s and the couple raised four children.

He settled in Harbour Breton, well-known as a deep-sea trawler port, but Alex stuck to his Sagona Island roots and continued to fish inshore on the same grounds as when he lived in Sagona.

In summer, he’d stay on his old island homestead during the work week and go home to Harbour Breton on weekends.

Alex was a good fisherman and earned a decent living from the ocean until the late 1980s when fish stocks, especially cod, went into a steady period of decline and it was harder to make ends meet. By the time he paid his crewman and vessel expenses, there wasn’t much money left.

That was when Mildred decided to make the biggest career change of her life. She decided to go fishing with her husband because that way, whatever money they earned would all go to the same household.

Mildred’s decision to fish with her husband helped with the family’s finances but it was difficult in other ways. Four years after Mildred started, the government placed a ban on cod fishing so the couple had to make more changes and adapt to fishing new species.

For Mildred it was difficult on another level as well. Having to leave home five days a week, leaving her children with friends and neighbours, was tough.

“My youngest, a daughter, was only in Kindergarten when I decided to go fishing with Alex and our spring fishery was on an island out in the bay and I had to leave her with another family so I could go away to work. We would go back home on weekends to get our supplies and stay with our family. We would fish lobster from April to June and then back home and fish out of Harbour Breton for cod and crab.”

For Mildred, the lobster season was very hard because leaving her young daughter for two months except for weekend visits was not part of the traditional lifestyle for most rural Newfoundland moms.

“My daughter didn’t like it either. She was with a wonderful family next door and was well cared for but she still says that she hated those nine weeks in spring when Alex and I were both away,” Mildred says.

She admits having feelings of guilt about it but there was little choice — living on social assistance was not an option. It all turned out well and her daughter is a mom herself now and fully understands her mother’s sacrifice back then.

Mildred has always possessed a strong sense of volunteerism and advocacy sentiments. She was involved with her churchwomen’s groups and other organizations at home but after she became established as a fisherwoman, a new door opened.

The outgoing inshore council representative on the FFAW for her district was stepping down and her husband suggested that Mildred should offer herself as a candidate. After much hesitation, she decided to give it a try and was the first female to be elected to the union council.

Mildred laughs when she talks about those early days with the union.

“My first thought was what have I gotten myself into now?” she says adding that the Fishermen’s Union was very much male domain and she often found herself the only woman in a room filled with men, mostly fishermen. Mildred credits Lana Payne who was then the Union’s communications officer for helping her.

“Lana kind of took me under her wing and a few of the women in the industrial division of the FFAW helped and there was never a problem,” she says.

Mildred also says that fishermen generally have a great sense of fairness and equality and never made her feel anything but a colleague of equal status.

In 2014, Mildred’s life was turned upside down and for a while, she wasn’t sure how she could cope. Her husband Alex became ill in late 2013 and just weeks after being diagnosed with cancer, he passed away in January 2014.

Alex and Mildred had setbacks in their life’s journey together but with the strength and power of two, they overcame those challenges with relative ease. But this time was different — this time she didn’t have Alex’s shoulder to lean on or his positive attitude to draw from but she knew that she had to put her face to the gale and push forward.

Fortunately, Alex always supported his wife in her union activities and when a new opportunity presented itself to Mildred about a year before he passed away, he encouraged her to go with it. The position required a person to collect data for scientific purposes in the lobster fishery.

“It was at-sea data collection and involved monitoring things like (lobster) egg stage development and enter it all into a database to track various biological and behavioral information for science,” she says.

Mildred liked the work and as things turned out, the program expanded after Alex passed on and it was just what the doctor ordered for Mildred. The program had expanded to cover most of the province, which required traveling, and it helped a lot to get her feet back on solid footings once again.

As for a political future?

“Who knows,” says Mildred. “I never say never and I see it as perhaps the best way I can help people — it is just another way to continue the advocacy work that I feel is important.”

And who better to advocate for people than a natural people person.

No Replies to "A People Person"