People make lists and write on whiteboards to keep their lives organized.

If you’re Joan Evans, Supervisor of Seagoing Personnel for the Canadian Coast Guard Atlantic Region, your whiteboard is wall-sized and you’re busy organizing the work and time off for about 700 employees.

Evans, 34 years old, assigns the people on the ships. “We plan individuals’ assignments for the year, so they get an assignment to a certain vessel for the year,” says Evans. A typical Canadian Coast Guard work shift is 28 days on and 28 days off.

Evans’ love of the water takes her way back. “I pretty much went out of diapers and into a boat,” Evans says. “I think the first time I went sealing I was 12 years old.”

Evans started at the Canadian Coast Guard as a deckhand in 2008. She took an acting assignment as a navigation officer and then on to the ice office. She landed in the seagoing personnel office in 2013.    During that time, Evans had two children. She went back to sea after they were born. 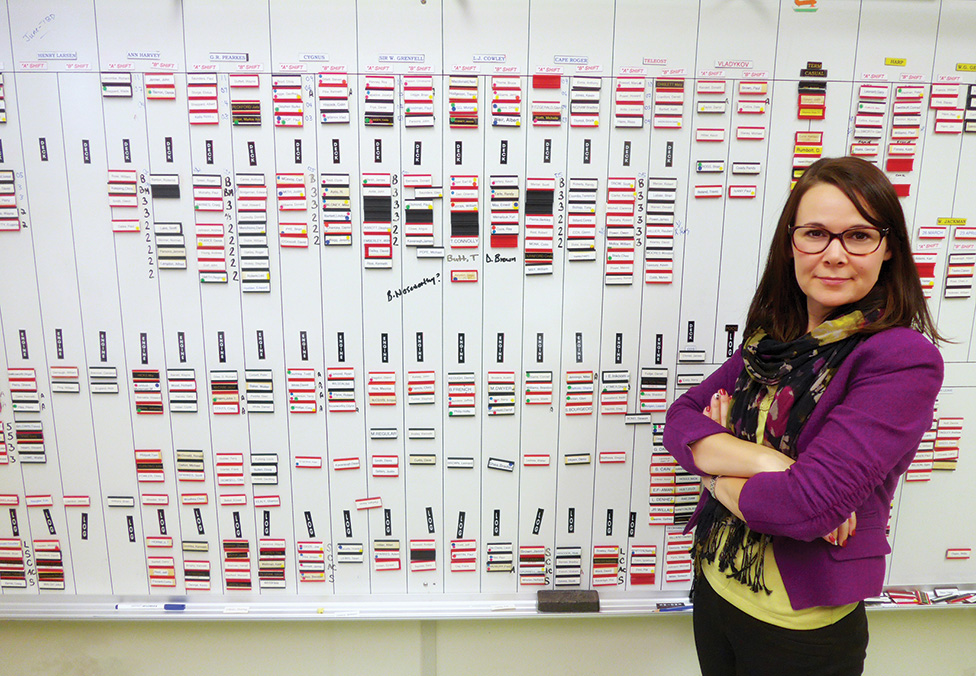 Joan Evans, Supervisor of Seagoing Personnel organizes the work and time off for about 700 Canadian Coast Guard employees.

“I loved it, except when they got sick and I wasn’t there. I found it a benefit when I was at sea because I had more quality time with them. I was with them over half the year. For me, it was a balance. I was doing what I loved, working at sea, yet I had half the time at home with my kids.”

Her biggest concern at work is, “keeping everybody happy. When you have 700 people you need to place, that’s a challenge. The key is to be consistent and to be comfortable and say at the end the day that you made the right decision.”

Evans’ position allows her to keep her certification to go to sea. As she looks ahead, she says, “I think when my children get older I may go back. There’s a good possibility. It’s in my blood and I love it.”

Denise Veber, 46 years old, grew up in a coastal community and was attracted to the Canadian Coast Guard in grade nine.

At a careers presentation, she took a pamphlet. “When I got to high school I had an idea what I needed to study to get where I wanted to go,” says Veber.

She followed her path and it led her to the Canadian Coast Guard College. “With the College, you go in for a specific purpose and there’s a job at the end. When you graduate, you have your certification to actually go on board. What I didn’t know at 18 years old coming out of high school was what an actual navigation officer was.”

Veber remembers one of her first duties in the fleet was to climb up on buoys bobbing around on the ocean to fix the lights. “There’s a technique to getting on the buoys and climbing up, and that was part of the fun!” The bird poop covering the buoys was not as much fun. 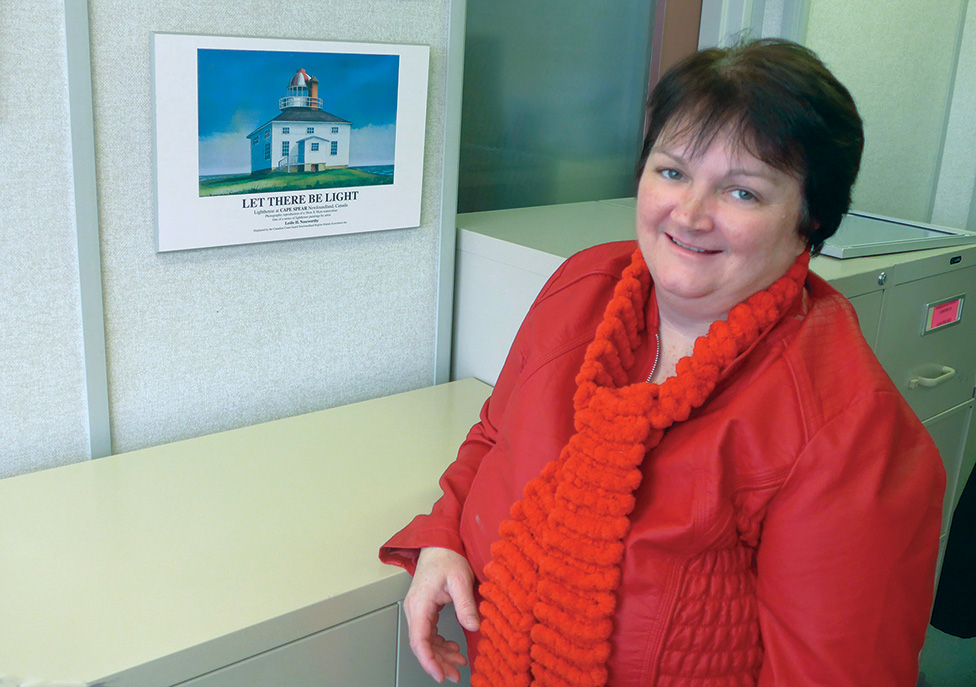 Denise Veber, Superintendent of Aids to Navigation. Denise has been working with the Canadian Coast Guard for 28 years.

During her 28 years with the Coast Guard, Veber has done everything from fleet operations to manager of the icebreaking program and marine communications and traffic services.

Today, Veber is Superintendent of Aids to Navigation in the Atlantic Region. She’s in charge of ensuring that the safe navigation systems are in place in the different ports and harbours.

While she says there’s been no favourite job, she remembers vividly a night on a large icebreaker in the Gulf of St. Lawrence.

“It was snowing, completely covered, and there were ships around but everything was completely stopped. You could see the lights in the distance. I went outside because it was such a beautiful night and I remember sitting on the top of the ship and it being so surreal. I was trying to picture and relate to that whole Death on the Ice situation. I came back from that and I got that book and read it again. I had a whole new appreciation for it.”

While Veber loved the sea, she had “made the choice early on in my career that I wanted family, so I opted not to go to sea. I could’ve stayed at sea if I made arrangements but I chose to come ashore and I was fortunate enough that I got a position in the office to be able to do that.”

“We’ve had women who continue to go to sea while they’re pregnant as well as after they’ve had the children,” Veber says. “It’s the job you chose, so no one is dictating what you can or can’t do. It’s what you choose personally.”

Veber admits that times have changed and there have been women in the fleet for many years now. “I feel like there are opportunities and it doesn’t matter if you’re male or female.”

Speaking of changing times, when Chief Engineer Mia (Maria) Hicks graduated in 1978 from the Canadian Coast Guard College, she was 20 years old and the first Canadian female Marine Engineer. “Someone has to be the first,” Hicks says, “I was the only woman, so I was the best and the worst.”

Her career in the Canadian Coast Guard started with an ad in the post office in Alberta. She was working in a cable factory. The only thing she knew about the Coast Guard was, “it’s intrinsically benevolent and it has free education.”

She loves her work. “It’s a very short commute! From my cabin to the officers’ pantry with the coffee machine it’s 10 steps, then 30 or 40 steps down from my cabin to the control room, where I can find out what’s happened overnight.”

“There have been times when I’ve been the only woman on the ship,” Hicks says. “Sometimes, because we’re crews and we’re time-on and time-off, there’s one or two women or even five, but we’re still usually outnumbered. Mind you, I have had a few trips — very rarely — where the women outnumbered the men in my department. It just worked out that way.” 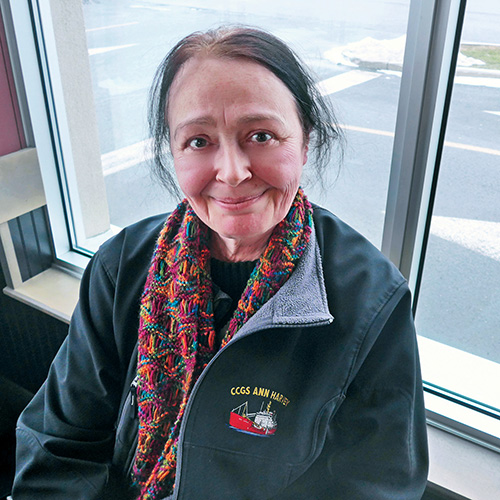 “Successful search and rescues are what’s really rewarding,” says Hicks. “When you find people and they’re alive… I remember there were overdue duck hunters and the helicopter couldn’t see them. We saw them from the ship because buddy flicked his BIC, in his rowboat. We found them and got them in safe.”

“You didn’t ask me if I would recommend it as a career?” says Hicks, “And I so would. It pays well and the time off is incredible. It’s going to sea, the light is right, you’re moving and you’re not stuck in one place, the ocean’s all around. It’s just right.

In 2015, another woman made waves as the first female head of the Canadian Coast Guard. Commissioner Jody Thomas says she hopes to encourage more young women to enter the Coast Guard. Joan Evans, Denise Veber and Mia Hicks agree.

Set your goals and set your sails for the Canadian Coast Guard. You’ll find exciting opportunities, a paid education, and a job at the end of it.

Visit the College and Careers section on the Coast Guard’s website: www.ccg-gcc.gc.ca/College-and-Careers/home

In last month’s column we stated that David Pretty was dragged 70 metres to the bottom of the ocean. This should have read 70 feet. We are sorry for this error.

No Replies to "A Sea Change"