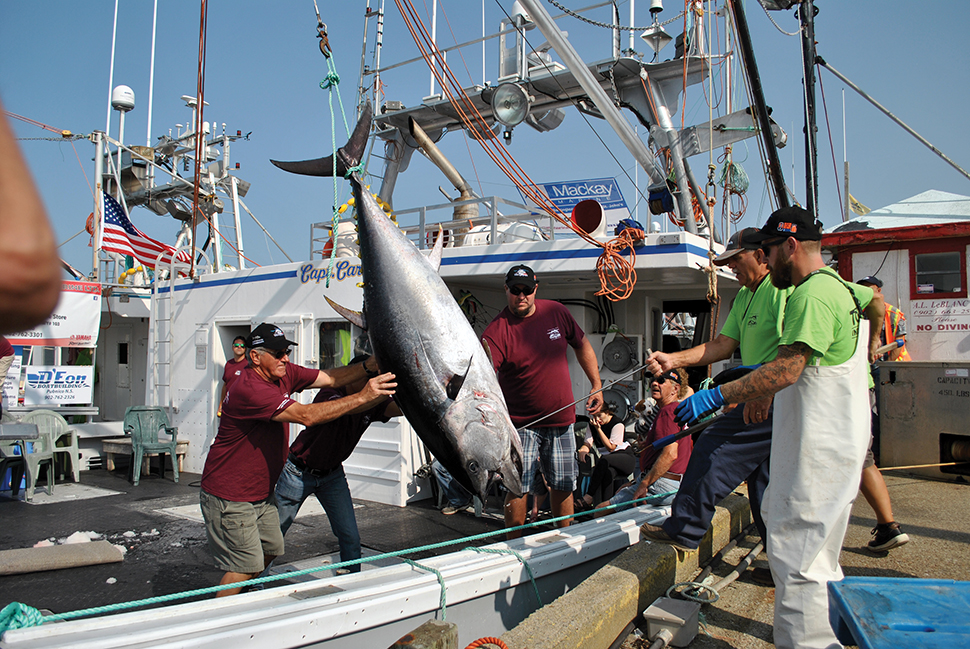 A total of 37 tuna were landed during the 15th annual Wedgeport Tuna Tournament and Festival weigh-in on Aug. 18–25, with a 680-pound bluefin caught by the captain (Cory Nickerson) and crew of Keepin’ Busy topping the scale to win the Milton J. Comeau Memorial Cup for heaviest fish.

Sixteen vessels participated in this year’s tournament, catching 16 bluefin, 20 big eye and one albacore. The heaviest bluefin caught in the Hell Hole weighed in at 360 pounds and was caught by the Jasmine et Lexie, captained by Andre Cottreau. Bringing in the heaviest overall weight for the tournament was the Blake & Jorgia, captained by John Malone, who landed one bluefin and six big eye tunas that tipped the scales at 1,086 pounds.

For researchers from Fisheries and Oceans St. Andrews Biological Station in New Brunswick, the tuna tournament is an event they look forward to every year, providing a prime opportunity to gather samples that are used to help determine the state of the tuna stocks.

“We  brought our whole group,” said researcher Alex Hanke. “There are four scientists and technicians in the group and there are a couple from groundfish here too who were just interested in doing the sampling and volunteered to help out. It’s such a neat experience. Everybody wants to come down and share in it and see the fish. Even in the museum,  the history of the fishing that has gone on here, the population  dynamics back in the day, there’s information on the size of fish that were caught in this area in the early 1900s and that tells us a lot about the health of the population back then which has some bearing on how healthy the population could be now.”

Hanke said the team sample heads from tuna that are caught, extracting the otolith or ear bone, which can tell them “how old the animal is, where it hatched, began its life and that information is used in stock assessment to assess the status of the population,” said Hanke.

“We also collect tissue samples which are used in diet analysis which tells us what tuna have been eating. It’s important that they have the conditions that when they produce eggs they are high quality and the larvae survive. We also use the tissue for genetic analysis. It tells us who their ancestors are. It’s kind of related to the otolith which tells us where it hatched. That DNA analysis is used for determining which stock the fish belongs to. We also look at the tissue to determine the lipid content. That reflects the condition of the animal.”

Managed by the International Commission for the Conservation of Atlantic Tunas (ICCAT), Hanke said scientists believe there are two stocks of bluefins in the Atlantic; a western population and an eastern population.

“The eastern population we believe spawns in the Mediterranean Sea and the western population spawns in the Gulf of Mexico, but that’s possibly a little bit narrow minded. Historically we believe there was spawning going on in and around the Canary Islands and the Azores and we’ve even picked up larvae off the Sloped Sea which is south of  Georges Bank  and are areas outside the normal spawning grounds.

“We try to manage them as independent units, but the problem is they don’t stay on their respective sides so there’s a bit of mixing going on and the mixing is becoming more important than it ever has been. It seems the proportion of eastern fish in the western Atlantic is increasing. Up to 50 per cent of the fish we catch are actually from the other stock, so we need to know, to sort that out so when we do the analysis we get a clearer picture of how abundant those two populations are.”

The South West Nova Tuna Association allocates 3,200 pounds of bluefin tuna quota from the commercial fishery to the tournament each year. The biggest bluefin landed to date in the tournament was caught in 2014 by the Atlantic Angler, weighing 796 pounds.

A Changing Tide for the Golden Cod of Gilbert Bay

No Replies to "Annual Tuna Tournament - Important to Scientific Research"