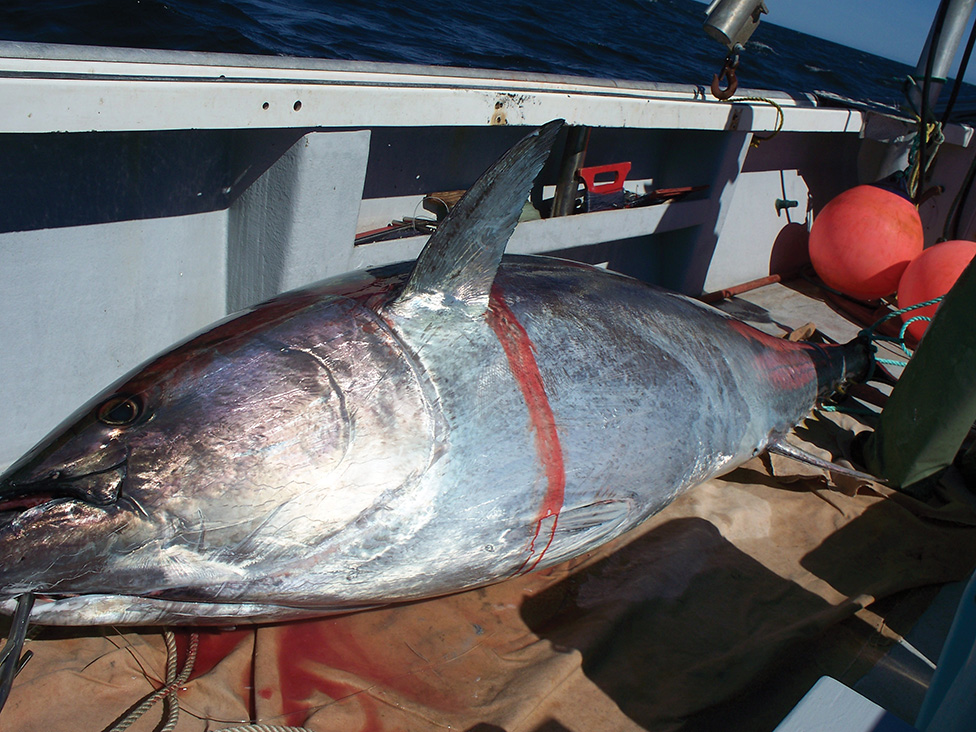 Are Bluefins Spawning in the Sargasso Sea?

The Sargasso Sea has been the stuff of myth and mystery for years.

It is the only sea on earth without a coastline — located in the mid-Atlantic and forms part of the fabled Bermuda Triangle. And it’s huge, covering about two million square miles. It’s named after a type of seaweed, genus Sargassum.

It’s a dead zone when it comes to wind and these various currents deposit all kinds of marine plant and detritus i.e. plastic into its midst. It’s actually known as the North American garbage patch.

Ancient seafarers feared it because they could be stuck in it for weeks. Some mariners never came out. We know it mainly because it is the breeding ground for eels which frequent our brackish waters. Both the American (the eels which frequent Nova Scotian waters) and the European eel hatch their larvae into the Sargasso Sea. They later return to the area to lay eggs.

It is an area of both myth and fact, figuring largely in the minds of authors like Jules Verne. He described the area in his novel Twenty Thousand Leagues Under The Sea.

Ezra Pound’s poem ‘Portrait d’une femme’ begins “Your mind and you are in the Sargasso Sea.”

There are also many mysteries when it comes to the bluefin tuna.

Eric Jacquard is president of the South West Nova Tuna Fishermen’s Association, based in Wedgeport and although he was a bit coy when the question was posed, he said an announcement on the topic could be forthcoming very soon.

Tuna which have been tagged did venture to the Sargasso Sea at a time when they were full of spawn.

Jacquard has been very active in the research-end of the fishery. It started a dozen years ago when he met Dr. Molly Lutcavage. She is the director of the Large Pelagic Research Centre which is now centred at the University of Massachusetts. This is a NCO (non-government organization) that partners with fishermen on research projects. The bluefin tuna is one of them.

The centre uses harvester’s vessels and expertise to keep tabs on various species. The vessels are used to tag the fish and observations by the harvesters play a large role in conclusions reached by the researchers.

Lutcavage noted that at a time when government scientists and environmentalists were screaming for a ban on tuna fishing, fishermen were seeing thousands of them in the Gulf of Maine. A quick plane ride, she said, revealed huge schools approaching the 7,000 number when other federal officials were saying the biomass had dropped to 5,000.

Federal scientific advice and politics play a large part when it comes to setting quotas.

The centre has affiliation with the U.S. government and ICAAT (The International Commission for the Conservation of Atlantic Tunas), the 48-nation strong international body which literally controls who catches what in the bluefin fishery, both in the western and eastern Atlantic.

Many have had issue with this body for quite some time as unrealistic quotas and uncontrolled rogue fisheries did indeed threaten the fishery across the pond.

The decision by a few countries in Europe to stop buying the product righted the ship somewhat so stocks in that area are now improving.

A major find by the centre through its tagging program is that there is mixing between the so-called eastern and western Atlantic bluefin tuna stock.

A fish tagged by Jacquard on the Hell Hole, off Nova Scotia, ended up in Tunisia in the Mediterranean. Just how much mixing occurs is a question which needs answering and the centre is working at that.

If the Sargasso Sea is another spawning ground for the bluefin, another clue to the puzzle will be unveiled.

Despite global economic woes, Jacquard expected the price to be about the same as it was last year due to the fact that although the Canadian Loonie has fallen dramatically during the past 12 months, so has the Japanese Yen.

Last year fishermen received an average of $4,000 per fish, depending on the quality.

There are different strokes for different folks when it comes to the bluefin sector in Atlantic Canada. The quota varies from Quebec, Newfoundland and Labrador, P.E.I., New Brunswick and Nova Scotia.

For Jacquard’s association, for example, its quota is 5,000 pounds for each of its 32 members. The increase announced by Ottawa earlier in the year could amount to an extra fish, if it’s not too large. Canada has the smallest quota of the total western Atlantic quota of 2,000 tonnes. The United States has the largest share followed by Japan. Canada’s  total take is 156 tonnes.

The Atlantic bluefin tuna (thunnus thynnus) has been prized as a food fish for centuries. The Japanese raw fish market over the past 40 years has severely depleted stocks so much so that Monaco introduced a resolution to have the fishery curtailed two years ago. The motion was defeated.

About 80 per cent of all bluefins caught end up on the Japanese sashimi market.

No Replies to "Are Bluefins Spawning in the Sargasso Sea?"