Fisheries and Oceans Canada (DFO) has a unique opportunity to survey the marine environment to see what it looks like before human interaction and marine traffic increase in the Placentia Bay area.

Kate Dalley is a biologist, who was raised in Mobile, Newfoundland and Labrador, by two biologists. “There was never any question that this was what I was going to do. My studies are in ecology, which is understanding critters’ homes — I look at why species live where they live, and also how things that we are doing are changing their habitats. This work is a natural fit for me because it has been a lifelong interest.”

It’s that passion that has guided Kate to where she is today: a key part of the Coastal Environmental Baseline Program with DFO.

“I understand the value of good information and that we are doing the best we can to help support sustainable fisheries and sustainable ecosystems. We’re all dependent on it.”

The Coastal Environmental Baseline Program is taking place across the country and falls under the Government of Canada’s Oceans Protection Plan (OPP), which is providing funding to ensure our oceans are cleaner, healthier and safer for years to come.

The five other areas chosen for this project are the Port of Vancouver and Port of Prince Rupert, both in British Columbia; Lower St. Lawrence Estuary, Quebec; Port of Saint John, New Brunswick and Iqaluit, Nunavut.

These coastal areas were chosen because they have the potential for increased vessel traffic or human activity. Researchers will collect comprehensive data to develop an understanding of the health of marine ecosystems in these areas. 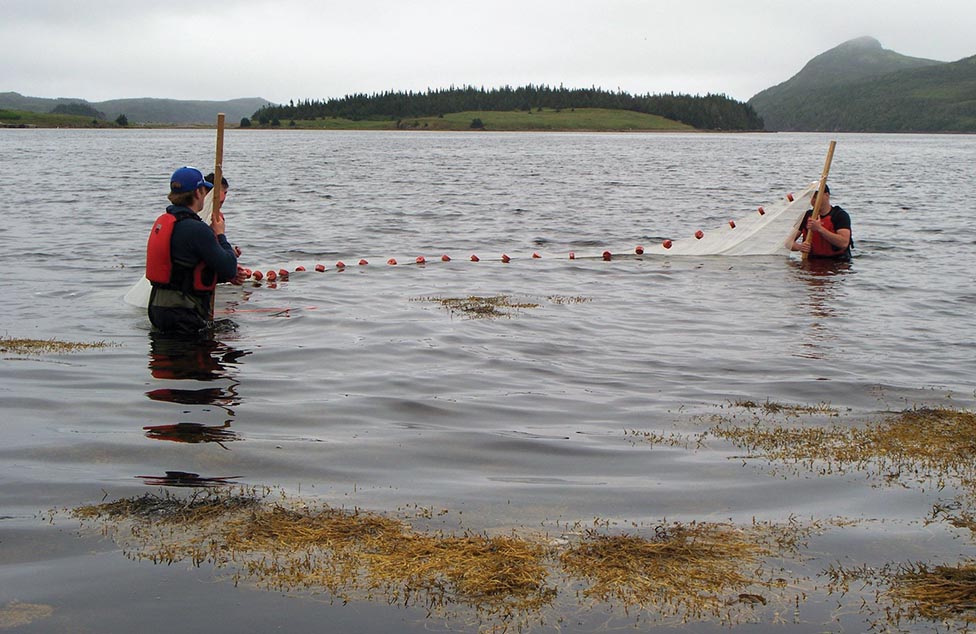 Data will be collected about whale and phytoplankton abundance, diversity and distribution and everything in between such as data on green crab, eelgrass, algae, marine sediment, water currents, herring and much more.

Dalley and others involved in this project are collecting data to help detect and respond to changes in the environment over time.

According to researchers, coastal areas like Placentia Bay are among the most dynamic marine ecosystems because they are constantly changing due to fluctuating environmental conditions such as rising and falling tides and temperature and salinity shifts.

By understanding what the environment looks like now, researchers will be in a better position to interpret changes that may occur from future potential interactions from humans, climate change or invasive species.

“Some species spend their entire life along the coast while others depend on it for critical parts of their life history, like spawning or juvenile survival. Having this understanding of nearshore dynamics allows us to start connecting the pieces to see how they relate to the larger marine ecosystem.”

“We put a lot of effort into understanding what’s happening offshore. This area where the land meets the ocean, where many of us live, that’s where we’re trying to fill the data gap.”

There’s a long list of species being studied and, with more than 20 environmental baseline projects within the Placentia Bay program alone, it’s a big job.

To start, Dalley and her team talked to researchers who already have information in order to ‘piggyback’ off their programs, some that are underway as part of the stock assessments and some that are part of more specific research projects. The idea is to consolidate existing information and bring it further.

“If someone has a mooring deployed, maybe I can put one of my listening devices on it because we’re all working towards the same goal — to better understand the ecosystem.”

DFO researchers and partners are starting at the bottom of the food chain with plants and phytoplankton and studying everything up to marine mammals. Species of concern were also targeted, such as depleted or invasive populations, or those essential to the area. They’re even looking at garbage and plastics in the system because, as Dalley puts it “It’s part of the ecosystem now. It’s there.”

Christina Bourne oversees one of the projects in the N.L. baseline program.

Bourne grew up in Holyrood and always wanted to be a biologist. “I knew I wanted to work with animals and nature.” Now she is a pelagic biologist who focuses on forage fish, specifically capelin and herring.

Bourne says the Pelagic Section is a perfect fit for her.

“I grew up on the beach with capelin and fishing off the wharf. I’m a Newfoundlander and the fishery is huge for Newfoundland and Labrador and what we do as researchers directly impacts the fishery. I like being able to support it but also sustain it. I’m a scientist so I want the environment to be healthy as well. This helps us find a balance for a healthy fishery in a healthy environment.”

Bourne was pretty excited when her project, the Herring Research Gillnet Project, was rejuvenated under the OPP’s Coastal Environmental Baseline Program because it will add to our understanding of the species and any changes that have occurred to the population in recent years.

From the 1980s to 2013, similar data was collected and this new project will allow the continuation of that time series.

“We already had a baseline, so we have an advantage with this project. We’ve got 30 years of data behind us so this will add on and give us a really solid understanding of herring biology in Placentia Bay.”

Bourne’s project is a partnership with four local fishers in Placentia Bay and they were able to pick it up almost exactly where they left off. A couple of the fishers they worked with before were even available to help with this project.

Those fish harvesters work in fixed locations for 45 days in the spring, record their daily catch and freeze samples of herring. The samples are processed by DFO staff to determine sex, spawning component, age and maturity. This information feeds directly into the stock assessment and provides the researchers information on any changes that have happened in recent years.

According to Bourne, herring are a key forage species and the main forage fish in Placentia Bay. It is a very important inshore food source year-round in coastal Newfoundland and Labrador waters. She believes that understanding what’s going on in the bays is essential to understanding what’s happening in the whole ecosystem.

“The fishers met with us last year and requested more science in Placentia Bay, so the timing is excellent. They know that the better science we get, the more informed the fisheries managers will be. So, the more they can help us, the better.”

In fact, her project was chosen partly because of the existing relationship between her team and the harvesters. It is a very good example of how well collaboration benefits the work being done under the Coastal Environmental Baseline Program. “It’s a great partnership,” Bourne says, proudly.

Non-government organizations, harvesters, Indigenous communities, academia and other stakeholders were invited to help come up with a list of ecosystem data collection priorities. Data is coming from many of these partnerships.

Piers Evans was one of Northeast Avalon Atlantic Coastal Action Plan’s (NAACAP) project coordinators. The organization is measuring water quality parameters in shallow, nearshore waters at eight sites from St. Bride’s to St. Lawrence to collect baseline data. They’re looking at things such as nutrients, pH and hydrocarbon concentration, among others.

Evans notes that NAACAP is a small organization, committed to science-based conservation and they’re always seeking ways to become part of larger research initiatives that have a focus on water quality, marine and aquatic habitat quality, riparian health, and wetland health.

NAACAP wanted to join DFO’s Placentia Bay initiative because of the ecological significance of the bay and the growing pressures the area faces from increasing commercial activities and the spread of invasive species.

“It is vital to establish the baseline geochemistry of such a vibrant coastal ecosystem in Newfoundland and Labrador. NAACAP staff is thrilled to take part in on-the-ground sampling in Placentia Bay, and eager to assess the results of multi-year sampling and analysis”

With all of the partners involved and species being studied, Dalley says the main challenge of the Coastal Environmental Baseline Program is all the moving parts.

“The most challenging part is coordination and trying to ensure that we’re covering all the bases and doing a good job at many things. There’s a lot to consider to make sure we’re getting the full picture.” But, while that is a challenge, Dalley adds, it’s also an opportunity to identify how and where efforts can be aligned.

“We have amazing partners and this is a unique opportunity to build so many good working relationships.”

Demand Has Never Been Stronger for Maritime Boatbuilders

No Replies to "Back to Basics"