We catch fish because we can sell them and earn an income.

We don’t intentionally catch fish for which there are no markets.

We can earn a better income, if we have a better understanding of what markets want and are willing to pay for and if we then organize ourselves to provide it.

To illustrate these observations, I have assembled a table of data showing imports of selected fish species and products by the United States in 1996 and 2016, which accompanies this column. The species selected were cod, historically the major species harvested in Atlantic Canada, Alaskan pollock, the species that replaced cod in many market applications after the moratoriums imposed on harvesting cod, along with snow crab and lobster, the main species that are economically important today.

The table below shows how the U.S. market changed over a 20-year period. And the discussion that follows talks about those changes. 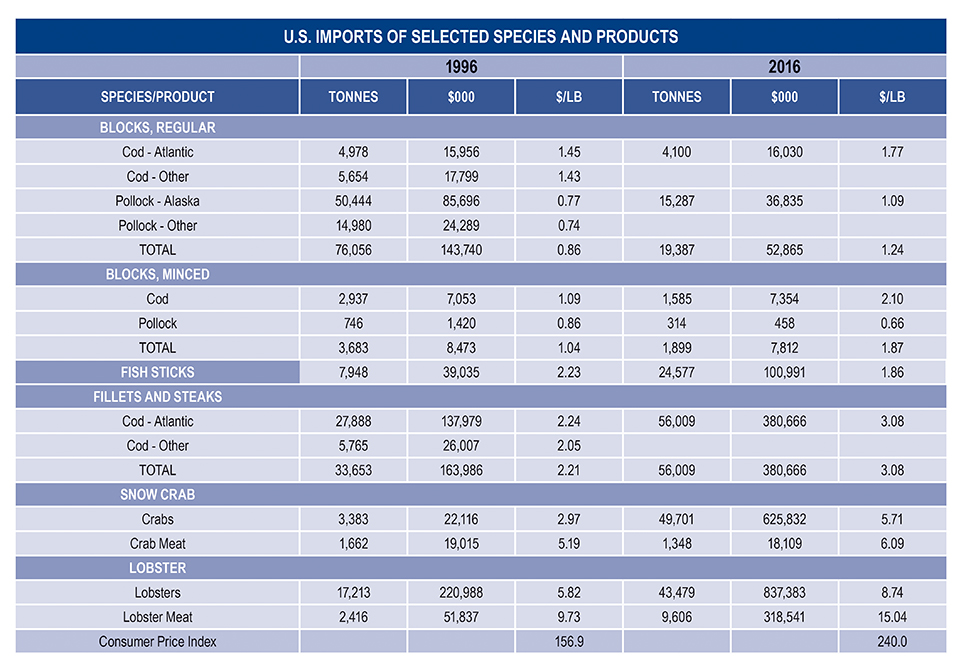 There is a school of thought that the more numbers you put in an article, the less likely people are to read and understand it. Maybe I have lost many people’s attention by this point. But there are some important lessons in the table as we contemplate the fishery of the future, so please bear with me.

First, it must be pointed out that 1996 was after the moratoriums on harvesting cod in Atlantic Canada had been declared, so the quantities in the table are undoubtedly lower than they would have been 10 years earlier. And by 2016, imports of cod were so low, they were no longer sub-divided between Atlantic cod and other cod.

Second, the overall product mix for the groundfish species changed dramatically. In 1996, the U.S. imported nearly 80,000 tonnes of blocks, either regular or minced and nearly 8,000 tonnes of fish sticks, the main product made from blocks.

In contrast to the situation with blocks, imports of fillets and steaks — a category that undoubtedly includes mostly fillets — increased from just under 34,000 tonnes to just over 56,000 tonnes. That indicates fillets were becoming more popular, while blocks were decreasing in popularity.

The table only shows imports, so the numbers do not provide a clear picture of what was actually consumed in the U.S. In particular, the products made from Alaskan pollock, the species, did not originate in Alaska, the state.

Products made in Alaska are not classified as imports, so the imports likely came directly or indirectly from Russia, which fishes the same stocks in the Bering Sea. And we know that blocks made from Alaskan pollock took over many of the markets that formerly purchased cod blocks from Atlantic Canada, something that continues today.

Apart from these overall quantities and prices, it can be observed in the table that cod products have higher values than products made from Alaskan pollock. And at least in 1996, Atlantic cod was more valuable than other cod, such as the cod from the Pacific.

The shellfish species present a somewhat different story. Over the 20 years, U.S. imports of snow crab and lobster increased by 1,469 per cent and 253 per cent, respectively. Imports of crab meat decreased by 19 per cent, while imports of lobster meat increased 398 per cent, but imports of both meat products were much smaller than imports of the species in the shell.

Increased imports of both snow crab and lobster were partly driven by increased supply from Canada. The increase in imports of crab were also driven by a decrease in supply from Alaska over the same period. But imports of lobster increased, even though the domestic U.S. supply also increased at the same time. 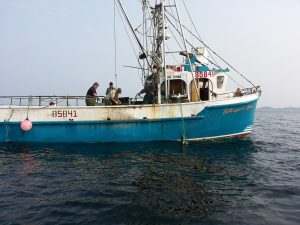 As this discussion illustrates, markets for all products — including fish and seafood — change over time, in response to changes in consumer demand, re-positioning of offerings by companies trying to create and/or serve that demand and what is available to be supplied.

Even though it caused a lot of disruption, our industry was fortunate in many ways that the moratoriums on harvesting cod and other groundfish that began in the early 1990s were followed by development of a new industry based on much more valuable shellfish species that people wanted to buy and were willing to pay good prices for.

In Newfoundland and Labrador, we are now seeing that transition go in reverse. Our shrimp and crab resources are diminishing, but our groundfish resources are increasing. As we try to figure out what to do to adapt, we need to get a really good understanding of existing and potential markets for products made from groundfish.

The Canadian Centre for Fisheries Innovation will be hosting a conference on the theme, Cod — Building the Fishery of the Future, in Gander on November 28 and 29.

A significant part of that program has been designed to give the people who attend an understanding of not just the resource but also the markets and what others are already doing to serve those markets. It will be extremely valuable information for people who expect to be part of the future fishery based on cod, so they can understand what they will need to do to earn good incomes.

Ernest Thornhill – A Man of Uncommon Courage and Bravery

No Replies to "Changing Markets"