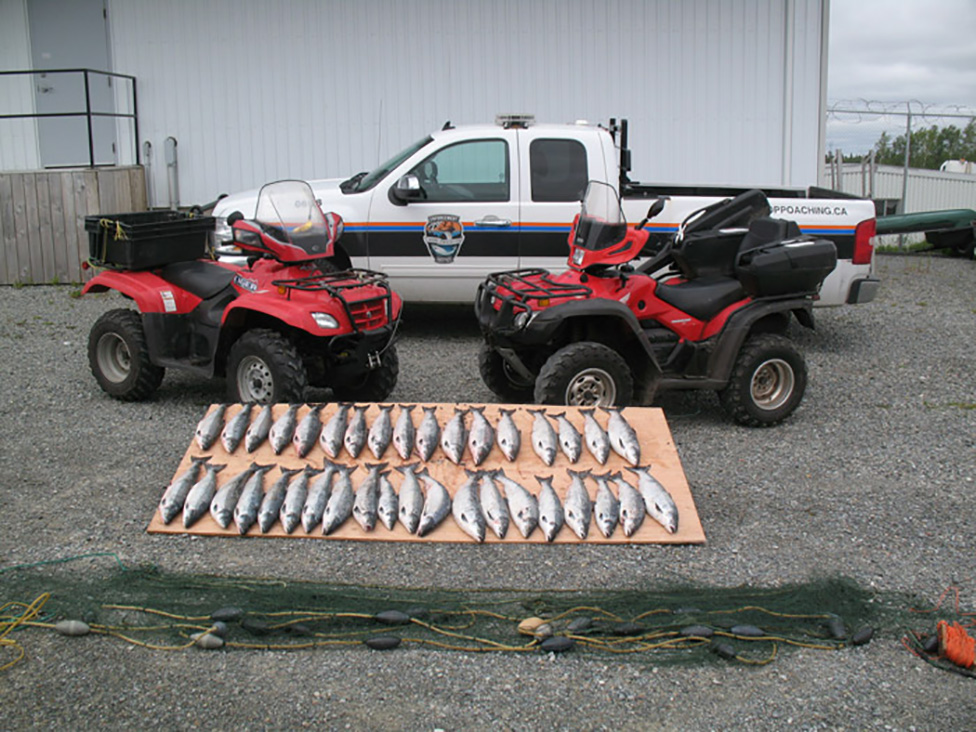 As a result of a rather unusual set of incidents, two individuals are facing numerous charges for illegally netting Atlantic salmon and for improper use of an ATV in the Lumsden area in central Newfoundland.

While working on anonymous tips from the public, officers with the Fish and Wildlife Enforcement Division began investigating allegations of illegal netting activity on Windmill Bight Brook near Lumsden. In the early morning hours of July 7, officers from the Gander detachment stopped two men on an all-terrain vehicle (ATV) in the community for violations under the Motorized Snow Vehicles and All-Terrain Vehicles Act.

When officers searched the ATV they found 13 untagged Atlantic salmon. Officers suspected that the driver of the ATV was impaired and called for assistance from the RCMP who dispatched a police officer from the New-Wes-Valley Detachment. The driver was subsequently arrested and later released. The passenger on the ATV is alleged to have tried to destroy evidence by attempting to throw the salmon away.

In the meantime, Fish and Wildlife Enforcement officers searched Windmill Bight Brook for the net that had been illegally set and upon finding it, decided to establish a surveillance operation. Several hours later, they witnessed an adult male arrive on the scene on an ATV and begin pulling the net which ultimately contained another 24 salmon.

Once officers apprehended the individual, it was determined that it was the same man that had been stopped by officers earlier that morning and arrested by the RCMP for operating an ATV while being impaired.

As a result, the individuals involved in these incidents are facing numerous charges for violations of the Federal Fisheries Act, the Motorized Snow Vehicles and All-Terrain Vehicles Act, and the Criminal Code. The individual involved in both incidents is also facing charges for impaired driving and for operating a vehicle while suspended.

Items seized were a Honda Rubicon 500 ATV, a Suzuki Eiger 400 ATV, 37 Atlantic salmon and one round of 12-gauge ammunition.