When Captain James Cook sailed into St. John’s, Newfoundland in 1762, his navigation tools were the heavens above and good luck.

He was a surveyor and a cartographer and the first to chart the treacherous and jagged coast around Newfoundland and Labrador.

He spent five summer seasons here from 1762-1767. During that time, he produced the first large-scale accurate charts and several volumes of Sailing Directions for parts of the island’s coast. Cook’s work was painstaking and his accuracy in surveying was beyond reproach. 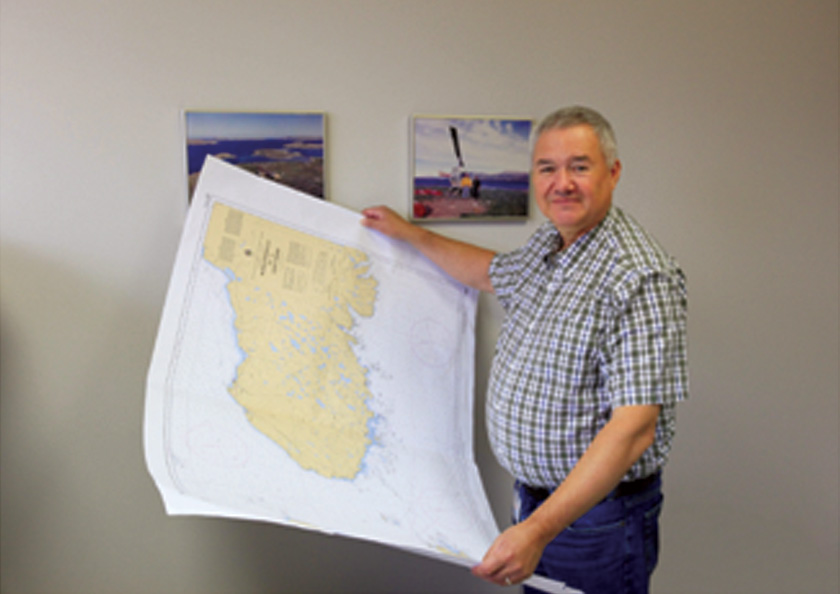 Gary Smith has worked for the Hydrographic Service (CHS) in Newfoundland and Labrador for 25 years and truly enjoys his work.

His charts would be used by those sailing around Newfoundland and Labrador’s waters for over 200 years, well into the 20th century.

Taking over where Cook left off, the Canadian Hydrographic Service (CHS) produces navigational charts and publications for all Canadian navigable waters, using technology rather than the stars. The CHS has approximately 275 employees and is headquartered in Ottawa with five offices located in: Sidney, British Columbia; Burlington, Ontario; Mont Joli, Quebec; Dartmouth, Nova Scotia, and St. John’s, Newfoundland and Labrador.

The CHS is part of the science branch of Fisheries and Oceans Canada. It produces over 940 charts across Canada and 42 navigational publications including sailing directions and tide and current tables. Since 1883, the Canadian Hydrographic Service has provided navigational products to ensure Canada’s waterways are safe for all sectors engaged in marine transportation.

Gary Smith is a Sailing Directions Officer and he’s worked for CHS in Newfoundland and Labrador for 25 years. He writes and updates six volumes of Sailing Directions for the province and he contributes to a seventh on general information for the Atlantic Coast.

Gary is part of a regional team of 13 people located at the Northwest Atlantic Fisheries Centre in St. John’s who collect hydrographic data and produce navigation charts and publications for the waters of Newfoundland and Labrador.

“Years ago, back in Captain Cook’s day, they used a lead line to obtain water depths known as soundings,” says Smith. A lead line is a rope marked in fathoms with a heavy piece of lead tied on it. The lead weight is cast out into the water and the depth is recorded.

He points to a navigation chart laid on his desk. “So, it was just a spot sounding in one location. The position of these soundings was obtained by taking angles from onshore using early survey instruments such as theodolites and in later years by sextant, an early navigational instrument. Then they took another spot sounding maybe several hundred meters away.” This collection of individual soundings, though limited in number, was then plotted on the chart. 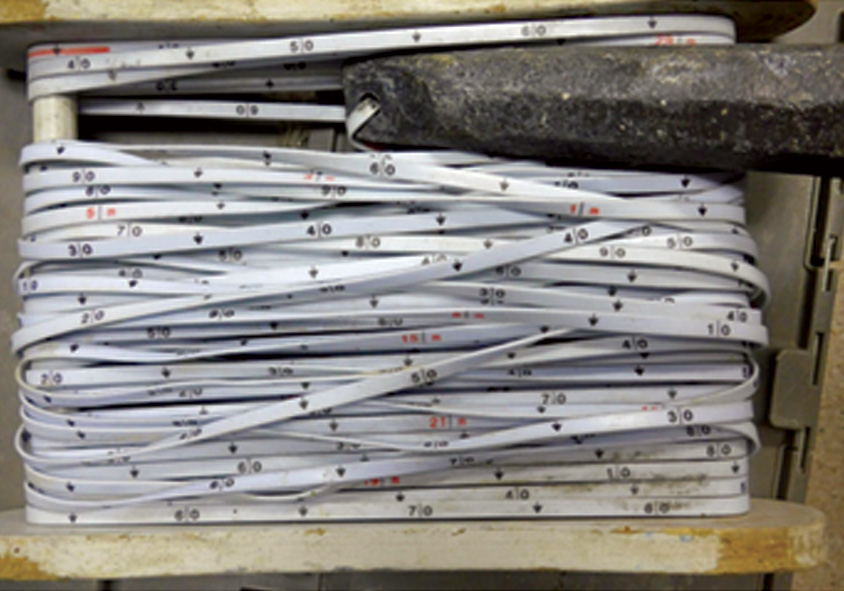 A lead line is a rope marked in fathoms with a heavy piece of lead tied on it and is occasionally used for spot soundings.

It was long and tedious work and not as precise as today’s methods. Smith, from Bishop’s Cove, Conception Bay North, is amazed at the technological changes that have happened over his time at the CHS in charting the seabed.

“The main pieces of technology we’ve seen the last 15 or 20 years were the introduction of a very precise Global Positioning System (GPS) for position fixing and multi-beam sounding technology which gives us 100 per cent bottom coverage in any of the surveys now carried out. There is nothing missed.”

A multi-beam echo sounder is a type of sonar that is used to map the seabed. Similar to other sonar systems, the multi-beam system emits sound waves in a fan shape beneath a ship’s hull. The amount of time it takes for the sound waves to bounce off the seabed and return to a receiver is used to determine water depth.

All soundings collected with these systems are very accurate and each is identified by a latitude and longitude value. Before these soundings are used on the chart, they are reduced for tide. “These days, there are millions of soundings captured each day. The amount of data is phenomenal.”

There are no pinnacles or shoals left unturned. Take, for example, the chart for Come By Chance sitting on Smith’s desk.

“What we’re looking at here on the chart of Come By Chance is the selected soundings and contours lines of equal water depth. CHS hydrographers collect millions of soundings per day and you could never plot on the chart what we collect. This increases not only our confidence, but user confidence that everything is captured there. And you’re not going to get any surprises with shoals or pinnacles sticking out of the bottom.”

A safe and mapped-out ocean floor makes for happy and safe sailors that operate all types of vessels sailing Canada’s navigable waters. The Canadian Arctic is a geographical area representing even more challenges for charting and for CHS.

Updating charts can be a mix of new school, multi-beam sonar soundings and the very old school. In fact, many CHS charts and publications still display quite a lot of original data surveyed by Captain Cook and the British Admiralty. 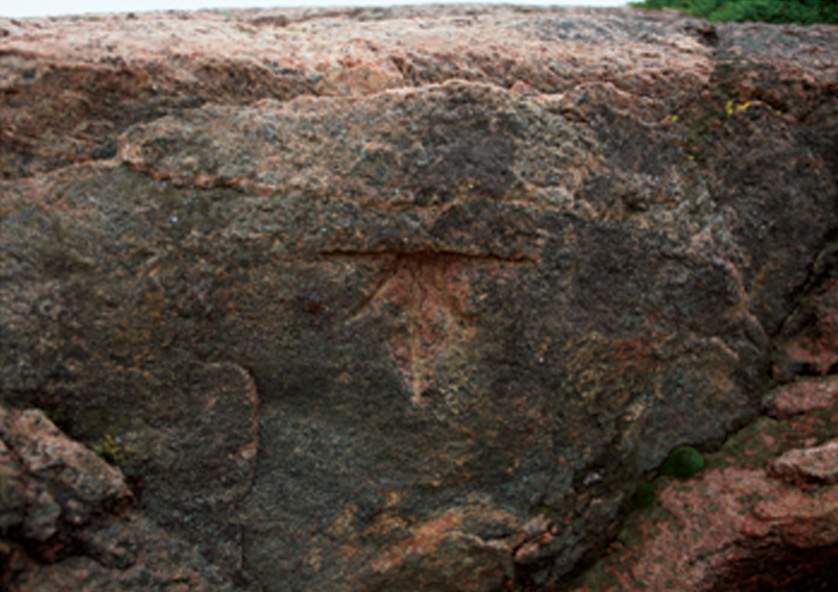 Benchmark chiseled into the granite cliff in 1890 by the British Admiralty and used as a tidal benchmark for hydrographic surveys in Forteau, Labrador.

Charting Canadian waters is a huge task and despite the  outstanding technology nowadays, it is still a time-consuming ship-based task to do hydrographic surveys. There are still about 40 per cent of N.L. charts that are based on very old surveys from those early days.

“If you need any information, I generally pick up the phone. I’ve been here for over 25 years and you know a lot of local people so you call someone and say do you know about this and you know they do. They’re more than happy to chat. You know it’s like every fisher around the province — they know their own backyard very well.”
Smith still finds hydrographic history as he travels the province.

Recently, while he was in Forteau, Labrador, a local resident mentioned an old mark on a cliff.

“He mentioned an old mark in the cliff that he had seen many years ago and suspected it was survey related,” says Smith. “He showed it to us before we left the site and it turned out to be an old benchmark chiseled into the granite cliff in 1890 by the British Admiralty and used as a tidal benchmark for hydrographic surveys in the area. We still have it listed in our database but nowadays brass plugs are used.”

Smith also gets information when he is in communities around the province doing sailing directions revisions. About 20 years ago, he was in Lord’s Cove on the Burin Peninsula and met fisherman Peter Hennebury on the wharf.

Hennebury asked what he was doing. When he found out Smith was with the CHS, he told him about an uncharted shoal 10 miles offshore. A shoal is an irregularity that rises off the sea floor and is dangerous to navigation. Shoals can be very dangerous to passing ships if left unmarked on navigational charts.

Soon after, a CHS survey ship returning to Halifax ran a multi-beam echo sounder over the area and discovered the uncharted shoal.

“We found that out by having a discussion on a wharf. Fishers know because they have fished these areas for many years. I was surprised it was there and it got put on a chart.”

If you’re looking for that shoal it’s now charted at 10 fathoms 1 foot and named Hodges’ Rock. Its latitude and longitude are 46° 42’ 02” N, 55° 42′ 01”W. Gary Smith submitted the name told to him by Peter Hennebury of an old fisherman named Hodge from Lord’s Cove who found the shoal and fished off that spot for many years.

“The Newfoundland and Labrador Geographical Names Board still approves land features. All names are entered into the federal system of Natural Resources Canada who maintains a database of all the official names in Canada,” says Smith.

When Captain James Cook left Newfoundland, he left his name behind in three places, Cook’s Cove and Cook’s Brook in Bay of Islands and in Pistolet Bay, Cook’s Harbour. He also collected and documented many names from local people while conducting his surveys. Cook had a great appreciation for local knowledge and during his surveys he often employed fishers that had considerable knowledge of their local area.

Following his expedition to Newfoundland, Cook wrote in his journal that he intended to go not only “farther than any man has been before me, but as far as I think it is possible for a man to go.”

If that sounds familiar, it should. “To boldly go where no man has gone before” is the narrative opening of Star Trek and the words uttered by Captain James T. Kirk. While not confirmed, many believe it was Cook’s words and reputation as an early explorer that led to both the lead character’s name and the opening line of each episode.

Captain James Cook set the standard for today’s map makers and hydrographers. And his work lives on as the first explorer to chart thousands of unknown miles of coastline on the map in over three continents. Cook was always a visitor.

Gary Smith lives here and he knows the 29,000 kilometres of shoreline in this province.

Smith is our modern day charting explorer as he travels around and updates, revises and revisits the coastline communities and their underwater features making it safe for sailors and vessels of all types.

“I guess the travel here in the province has been the most rewarding,” says Smith. “I’ve met hundreds of people and when I go back to their communities, I get a chance to run into them again. They’re very appreciative of what CHS does and the improvements in charting that have been done.”

No Replies to "Charting Your Way"