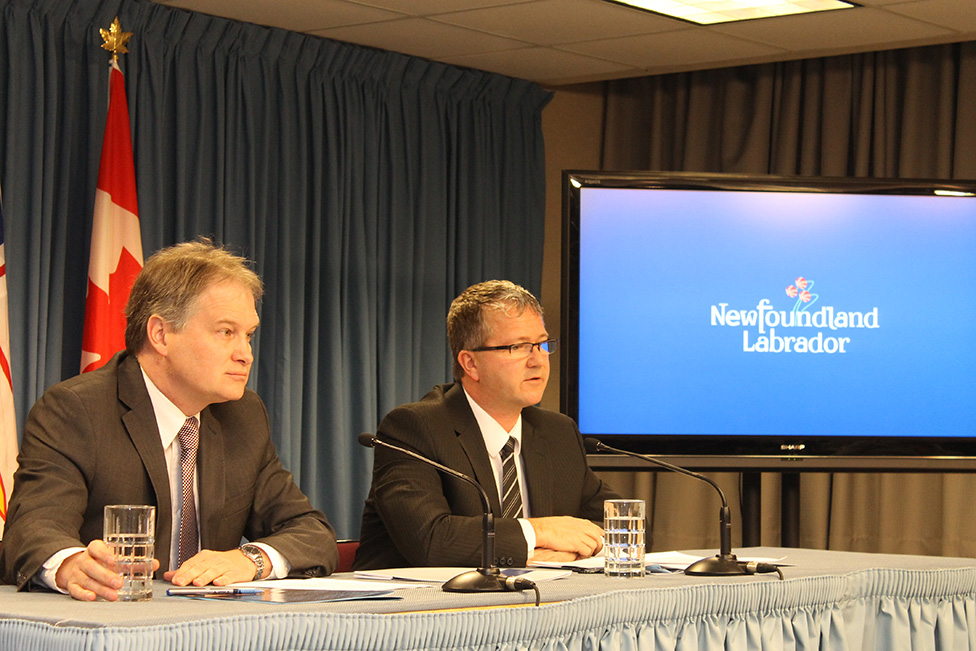 Chronology of a Deal Gone Bad

“The provincial fishery is now ideally positioned to capitalize on unrestricted access to European seafood markets and become more globally competitive with the creation of a $400-million federal-provincial fund to support industry enhancements.”

This was how an excited and optimistic Kathy Dunderdale described the now embattled fisheries fund on October 29, 2013.

At the time, the now former Newfoundland and Labrador premier went on to say “this unprecedented level of investment in the provincial fishery will help us achieve previously unimagined economic gains from our renewable fish resources, which will support economic prosperity in rural communities for generations to come. The provincial government strongly advocated for the beneficial terms achieved through the Comprehensive Economic and Trade Agreement (CETA) between Canada and the European Union, and through collaboration with the federal government, we have now created significant financial resources to take full advantage and continue our success as one of the most vibrant economies in the nation.”

How things have changed in just over 14 months.

The province of Newfoundland and Labrador now finds itself embroiled in a very pubic and nasty fight with Stephen Harper’s government in Ottawa.

In fact, little if any progress has been made on this front, with someone observing that relations are actually worse not better. In its latest move, the provincial government announced recently it will be pulling out of all trade negotiations unless Ottawa lives up to its side of the agreement.

So how did such a glorified agreement go south, so quickly? The Navigator takes a look back at the timeline for the now nefarious CETA-related fisheries fund:

June — At the 2007 European Union (EU)-Canada Summit in Berlin, Canadian and EU leaders agree to conduct a joint study examining the costs and benefits of pursuing a closer economic partnership.

October — Canada and the EU issue a joint study, “Assessing the Costs and Benefits of a Closer EU-Canada Economic Partnership”, which provided supporting rationale for a launch of negotiations.

December — A notice is published in the December 20, 2008, Canada Gazette seeking Canadians’ input on the possibility of negotiating a trade agreement with the EU. These consultations were open to all stakeholders and groups.

March — A Canada-EU joint report is finalized, defining the scope of potential negotiations.

October — A successful and productive first round of negotiations toward an agreement is held in Ottawa. Both sides made efforts to identify common grounds and set an ambitious negotiating timeline.

December — Canadian and EU trade ministers meet to take stock of progress to date, instructing negotiators to maintain the pace and ambition of negotiations.

October — Nine formal rounds of negotiations are completed, with significant progress made across all sectors. Negotiations move into a more intensive and focused phase.

February — Federal, provincial and territorial ministers responsible for international trade meet in Ottawa and recognize the trade negotiations with the EU as a priority.

February — Canadian and EU trade and agriculture ministers meet in Ottawa to further narrow the remaining outstanding issues in the negotiations.

June — Provincial government responds in the legislature to what it calls CETA-related inaccuracies raised by the provincial NDP.

October — Prime Minister Harper and José Manuel Barroso announce, in Brussels, that Canada and the EU have reached an agreement in principle.

October — Government of Newfoundland and Labrador hosts an elaborate press conference to announce the $400-million federal-provincial fund. No representatives for the federal government were present at the announcement.

November — A private member’s resolution was passed in the House of Assembly that recognized the gains achieved for Newfoundland and Labrador through CETA and supports the creation of a $400-million federal-provincial fund to advance the industry.

November — Government of Canada, via the Economic Action Plan website, outlines how CETA will benefit Newfoundland and Labrador. 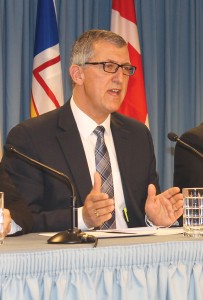 January — Federal Minister Rob Moore addresses the St. John’s Board of Trade on the advantages of the CETA deal and meets with provincial officials.

August — Canada and the EU announce that they have reached a complete text of the Canada-EU Trade Agreement, marking the conclusion of negotiations. Canada and the EU are now proceeding with a thorough legal review and translation of the text into the other 22 EU treaty languages.

August — Full technical CETA text leaked to a German publication and published prior to official release.

September — At the Canada-EU Summit in Ottawa, leaders release the completed text of the Agreement. It is published in Canada in both of Canada’s official languages.

November — Rumours surface in the media and legislature that the $400-million fisheries fund might be in jeopardy. Premier Paul Davis said discussions to finalize the deal are still ongoing.

December — Federal government announces that its share of the fund is contingent on proof of negative impacts resulting from removal of minimum processing requirements. The province states this was never the deal it entered into with federal International Trade Minister Ed Fast. Rob Moore, the conservative member representing Newfoundland and Labrador, begins speaking on behalf of Ottawa.

December — Association of Seafood Producers announces its support of the CETA deal and efforts to clarify the industry fund.

December — Premier Paul Davis meets with Prime Minister Harper in Ottawa and results in no resolution to dispute. Davis accuses the federal government of attempting to impose new conditions on the fund that will make it impossible for the province to access the $280 million.

December — The Council of Canadians says that Newfoundland and Labrador Premier Paul Davis should commit to holding public hearings in the province prior to making the final decision on whether or not to support the controversial trade agreement with the European Union.

January — Provincial government asks all Newfoundland and Labrador MPs where they stand on CETA dispute.

January — The provincial government writes Minister Fast to reiterate the province’s position and to advise of its decision to suspend its participation in all trade agreements currently under negotiations by the federal government pending the successful resolution of the matter.

January — Federal Justice Minister Peter McKay weighs in on the fray and says fisheries fund was never meant to be a “slush fund” and was available to the province only if MPR-related losses could be demonstrated.

January — Officials from the Newfoundland and Labrador cabinet meet with a number of embassy representatives and industry associations in Ottawa to outline their position on CETA and the fisheries investment fund. It is anticipated these groups will encourage the federal government to address this issue in order to best protect the interests of their respective members and stakeholders.

January — The premiers of the three Maritime Provinces say Newfoundland and Labrador is on its own in CETA fight with Ottawa.

January — Association of Seafood Producers and the St. John’s Board of Trade both announce they do not support the province’s stance of pulling out of all free trade talks.

January — The provincial government states that it takes offence to Minister Fast’s recent comments which reference the fisheries fund as a ‘slush fund’. Officials say Fast has not responded to letters, has ignored the province in his capacity as trade minister, has refused to visit the province and neither he nor his officials have reached out in any way to operationalize the agreed upon fund.

February — The Council of Canadians says Newfoundland and Labrador Premier Paul Davis should commit to holding public hearings in the province prior to making the final decision on whether or not to support the controversial trade agreement with the European Union.

February — The federal NDP opposition calls on the Harper government to honour the original CETA-related fund with Newfoundland and Labrador.

February — SumOfUs.org publically “thanks, Newfoundland, for standing up to Harper’s trade agenda.”

SumOfUs.org is described as a global movement of consumers, investors and workers all around the world, standing together to hold corporations accountable for their actions and forge a new, sustainable and just path for our global economy.

No Replies to "Chronology of a Deal Gone Bad"