Canada has one of the most effective search and rescue (SAR) systems in the world.

The Canadian Coast Guard and Coast Guard Auxiliary respond to about 13 search and rescue calls, assisting 43 people and saving 13 lives a day across the country.

The Canadian Coast Guard is responsible for maritime SAR, including the coordination, control and conduct of SAR operations in addition to prevention programs to reduce the number and severity of maritime incidents.

In the Canadian Coast Guard’s Atlantic Region, the Oceans Protection Plan has resulted in a number of initiatives to enhance SAR capacity, including:

Re-opening of the Maritime Rescue Sub-Centre in St. John’s, N.L.

But it’s not just boats and buildings that make a world-leading marine safety system.

AT HOME BY THE SEA 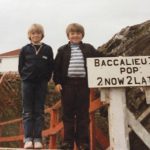 Jody Walsh as a child (right), outside the Baccalieu Island Lightstation

Finally, the call would come from a local fisherman and his sons that they were heading to Baccalieu to haul their cod trap so Walsh’s mother would drive him to the wharf in Bay de Verde. Forty-five minutes later when the crew, with Walsh in tow, reached their destination, the skipper’s son would carefully place Walsh on a ladder that extended down the steep cliffs into the water.

“My father would place me in front of himself and tell me to climb. Shortly afterwards we would be standing on the safety of the crane deck watching the skipper and his sons haul their cod trap.” 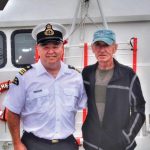 Engineer Jody Walsh with his father, Linus,
at the official opening of the Old Perlican SAR station

Walsh describes Baccalieu Island as a place of minimal human activity yet full of life. “I would be awakened in the morning mostly by the sound of the foghorn, but then other days by the roar of the sea pounding the cliffs under my bedroom window,” he reminisces.

“I would stand to the bedroom window looking out at the foaming seas. All windows were open in the dwelling to let fresh, salty air blow through. You could hear the sounds from the birds outside. Thousands of gannets, puffins, kittiwakes, seagulls. You could even hear the whales blowing as they surfaced for air.”

It was during one of his summers on Baccalieu Island at the age of 12 that Walsh decided he wanted to work for the Canadian Coast Guard (CCG) and he followed through. Walsh is now the chief engineer for the CCGS Sacred Bay at the new SAR station in Old Perlican.

A lot of work went into finding the right locations for the three new SAR stations. For Old Perlican, things like a helicopter landing area for medevacs and access to resources such as fuel were a priority.

In St. Anthony, the Coast Guard already had two suitable buildings available for renovation; a storage building was newly built.

For Twillingate, the best match was an old RCMP facility.

Each station consists of operational space, storage and crew accommodations. New wharves and floating docks were constructed at each site to accommodate brand new Bay Class vessels and the stations’ fast rescue crafts.

The stations in Twillingate and Old Perlican were built to Leadership in Energy and Environmental Design (LEED) standards, a green building certification program used worldwide to help building owners and operators be environmentally responsible and use resources efficiently. Additionally, both sites generate clean, sustainable solar power on site to reduce energy costs. 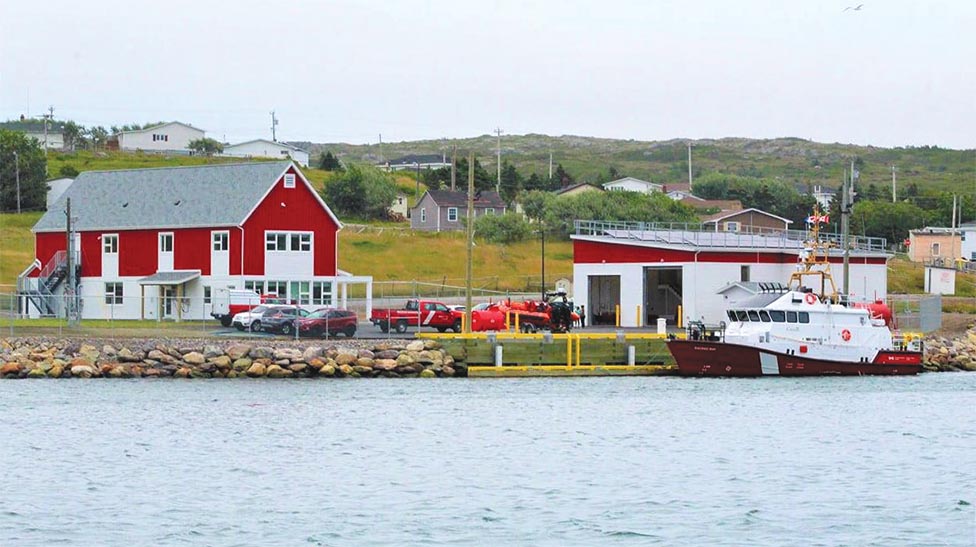 Trained professionals, like Jody Walsh, manage vessels and equipment that are essential elements of the maritime SAR system. The new station near his hometown also meant eight new jobs for the area, something that’s not lost on Walsh, who’s very happy to be working close to home.

“Now when I sign on for duty, I still get to go home every night to my wife and best friend, Diane.”

Before working for the Coast Guard, Walsh spent 10 years as a fish harvester and says he knows all the harvesters who come through the Old Perlican port. He’s got firsthand experience of what the SAR station means for fishers in the area.

“People in the community like knowing they can go on the water anytime and somebody has their back. It gives them a sense of comfort; a sense of security just to untie the vessel from the wharf to go fishing knowing that there’s people here if we need them.”

Old Perlican is a busy port with 80–100 vessels going through every year from the Northeast coast and as far away as White Bay. Since the station opened in September 2019, the crew members have been kept on their toes with medevac calls, towing and support for land search and rescue with shoreline searches.

Walsh jokes that he moved out of Bay de Verde to get away from the fog (he calls his father every morning to tell him that the sun is splitting the rocks in Old Perlican, 11 kilometres away), but you can hear the pride in his voice when he talks about his job.

He recalls one incident out of Winterton with a boat that was taking on water in the engine room. When Walsh and his crew got there, another fishing vessel had arrived. The boat had shut down and water was above the engine.

“We passed over some pumps and with instruction over the radio we told the guys how to operate it and what to do and we started pumping the boat out. We escorted them back into Winterton and everything turned out okay,” he recalls.

The St. Anthony port also sees up to 100 vessels a year and that station has been consistently busy since opening.

Aaron Coffin is the Commanding Officer of the CCGS Pennant Bay in St. Anthony, which is also his hometown. Before joining the Coast Guard, Coffin was the captain of an oil tanker with a local company, sailing to the Arctic in the summer and internationally in the winter. He worked six to eight weeks at a time, sometimes more.

When the opportunity came up to work at the new station in St. Anthony, he “lucked into a full-time job at home,” as he puts it. Now he works for two weeks at a time and goes home every evening to his partner Krista and their two children: Dylan, 4, and Joshua, 2. 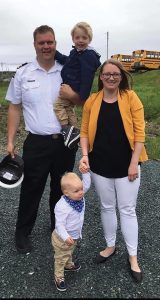 Commanding Officer Aaron Coffin with his family: Krista, Dylan and Joshua, at the official opening of the new SAR station in St. Anthony

“I still haven’t taken for granted that I can sleep in my own bed when I get off work. When I started nautical science in 2002, I didn’t think that would ever be an option.”

Of the seven new stations announced in Western and Eastern Canada, St. Anthony was the first station to become operational. And like Old Perlican, the SAR facility in St. Anthony gives fishermen, recreational boaters and their families a sense of security should they encounter trouble while on the water.

If there’s a life-threatening emergency like a man overboard or missing person, Coffin and his crew are sent first. Although locals are starting to rely on them more, Coffin would like to be even busier.

“Like most Newfoundlanders, fishermen are very proud people. I understand it can be hard to get on Channel 16 and say ‘I’m in trouble and I need help,’ when you could just pick up the set on Channel 10 where no one is listening, and ask your buddy for a hand.”

But Coffin says things can change quickly and the Coast Guard is trained to respond in these situations.

“If you’re in distress, please call the Coast Guard first. That’s what we’re here for.”

Coffin reflects on a couple of incidents that he feels really prove the worth of having local search and rescue resources available.

Recently his colleagues at the Port aux Choix station pulled a person out of the water after 20 hours. Another time in Trinity Bay, the crews from Old Perlican saved five people from a life raft after their fishing vessel went aground.

“I’m proud that our stations along the coast instill a sense of trust and security in the minds of people who go out on the water.”

Coffin and Cull even played sports and went to school together when they were younger, before going their separate ways. Now, their kids play together and the two families live and work side by side.

So, what does it mean to a coastal community to see a prominent red and white building, a new lifeboat in the harbour and new crews of first responders?

Gordon Noseworthy is a former mayor and now harbour master in Twillingate; another port that sees 80–100 boats come through during the fishing season.

Noseworthy’s job means he is in regular contact with the many fishing vessels and pleasure boats that come to Twillingate. He took a keen interest in seeing the Twillingate SAR station come to fruition and participated in Coast Guard’s community and stakeholder engagement from day one. 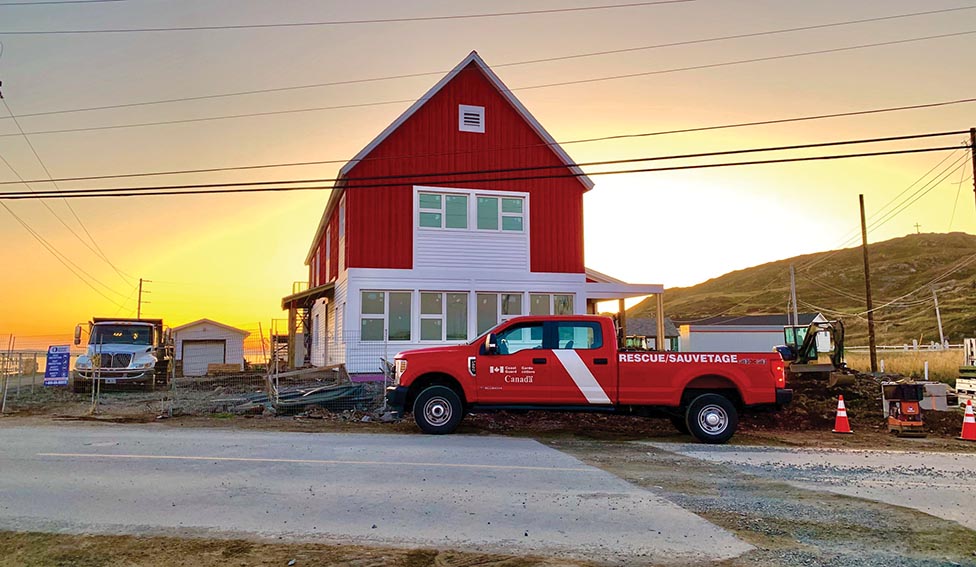 The new Canadian Coast Guard SAR station during its construction on Main Street in Twillingate, N.L.

Noseworthy can’t stress enough the positive effects of having the SAR station and CCGS Conception Bay in the town.

“The best thing that ever happened to this place. Over the years if a boat broke down and an icebreaker went and got it, it took them to the closest port. Now she’ll bring you home.”

There’s also spinoff for local businesses. The station began operations in May 2020 and since then, grocery stores, service stations and other businesses in the area are definitely busier.

“Feedback from people in the community has been all positive,” Noseworthy adds. “It’s just the comfort of knowing it’s there.”

Walsh is hearing the same thing in Old Perlican.

“Fishermen can’t stress enough the sense of security that it gives them having the vessel there. What it means to them to be able to pull away from the dock and go about their fishing knowing that we’re on standby. The flag is always flying to show that the Canadian Coast Guard is always there for them.”

For Coffin, it’s also personal. “St. Anthony is my hometown. My parents, spouse and kids live here. We’re all from here. We all have a vested interest in St. Anthony and we’re proud to be here and to be able to provide the service to people on the waters around the Northern Peninsula. There’s a sense of pride to be able to help the fishermen when they’re in need and to give back to the area. We know most of the boats that come in here. We know most of the fishermen on a first-name basis, we know their families. There’s definitely a personal connection.”

No Replies to "Close to Home"