Cod and Some Lessons from History

Several of my recent columns have focused on the increasing cod resource and how we can build a successful fishery based on it in the future.

This month, I will discuss the idea that, if we want to build a better future, we need to understand our past.

If you go the Northwest Atlantic Fisheries Organization’s (NAFO) website, you can find a lot of historical data at http://www.nafo.int/data/frames/data.html. Currently, you can find reported catches for the period from 1960 to 2013, a total of 54 years. It is important to note, however, that these are the reported catches, not necessarily the actual catches, because there were certainly catches — sometimes large — that were not reported.

Nevertheless, it is the best data we have about catches in the northwest Atlantic over a historically very important period of time. It provides an interesting picture of what happened in the fishery and the ecosystem that may have some relevance for thinking about our industry’s future. 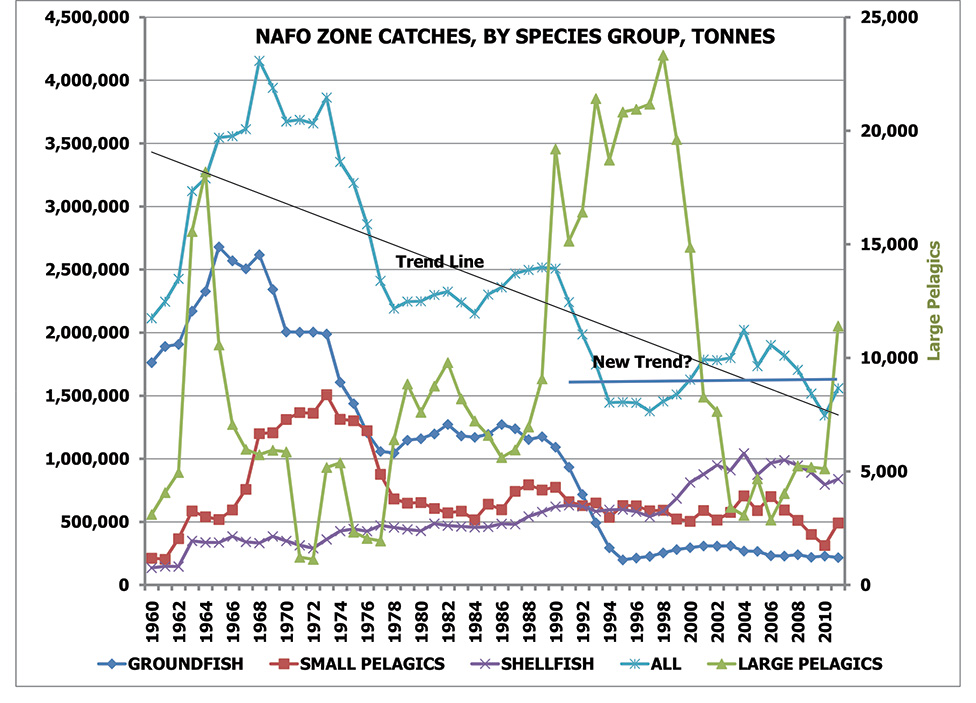 In 2012, I downloaded all the catch data for the years 1960 to 2011, a total of 52 years. I have not updated my files since then, so the discussion below is based on the data for those 52 years. Including the more recent data would not have a significant impact on the overall picture I will discuss.

I should point out that the data is for the entire NAFO zone, which is located in the northwest Atlantic and stretches from Greenland in the north to the Eastern Seaboard of the United States in the south. Most of the zone is adjacent to the Canadian coastline, but it also includes areas adjacent to Greenland, St. Pierre and Miquelon (owned by France), and the U.S. Consequently, the reported catches are from an international fishery and not just those in Canadian waters, although most were taken in the Canadian part of the zone.

It is also worth pointing out that some important commercial species are not included in the data, presumably because they are confined within national economic zones not covered by the NAFO Convention. Lobster is of particular significance in this respect, due to both the magnitude and value of the catches.

Catches in the zone were 1.6-million metric tonnes in 2011 — pretty good, considering the total included very little cod — but that represented only about 1.2 per cent of combined global production from fisheries and aquaculture, which totaled about 135 million metric tonnes. As this indicates, the relative importance of fish harvested in the NAFO area has decreased substantially over time.

Of the total catches reported for the 52 years, groundfish represented 46.8 per cent, small pelagics 29.7 per cent, shellfish 23.1 per cent and large pelagics 0.4 per cent. Included in these totals were 32 individual species — 17 species of groundfish, four small pelagics, seven shellfish and four large pelagics. In other words, the resource base in the NAFO zone has been fairly diverse.

However, averages and percentages tell only part of the story. Another important part is what happened over time.

Groundfish catches reached a peak in 1966, with cod hitting its peak in 1968 and each peak was followed by a long period of decline, ultimately leading to moratoria being imposed on harvesting cod and many other groundfish species in Canadian waters during the early to mid-1990s.

Small pelagic catches peaked in 1973, mainly because capelin were caught in large numbers after groundfish catches started to decrease. But capelin catches then fell dramatically until 1980, after which there was a series of increasing catches to reach a second, much lower peak, in 1990, followed by another hard fall.

In 1960, shellfish catches were very low but they increased over time, especially after the moratoria on fishing groundfish, but peaked in 2004 and have been declining since then. Catches of large pelagics represented a small portion of the total but varied a lot by year, likely because they are migratory species available mainly when food and water temperatures are conducive.

In general, what the time-series patterns show is that fishing is opportunistic in nature, something that is not really surprising. We harvest what nature provides and that varies over time, based on both changing conditions in the ecosystem and fishing effort. The early years in the data series show the largely unregulated foreign fishing that depleted resources and created the political pressure that ultimately led to the 200-mile limit. 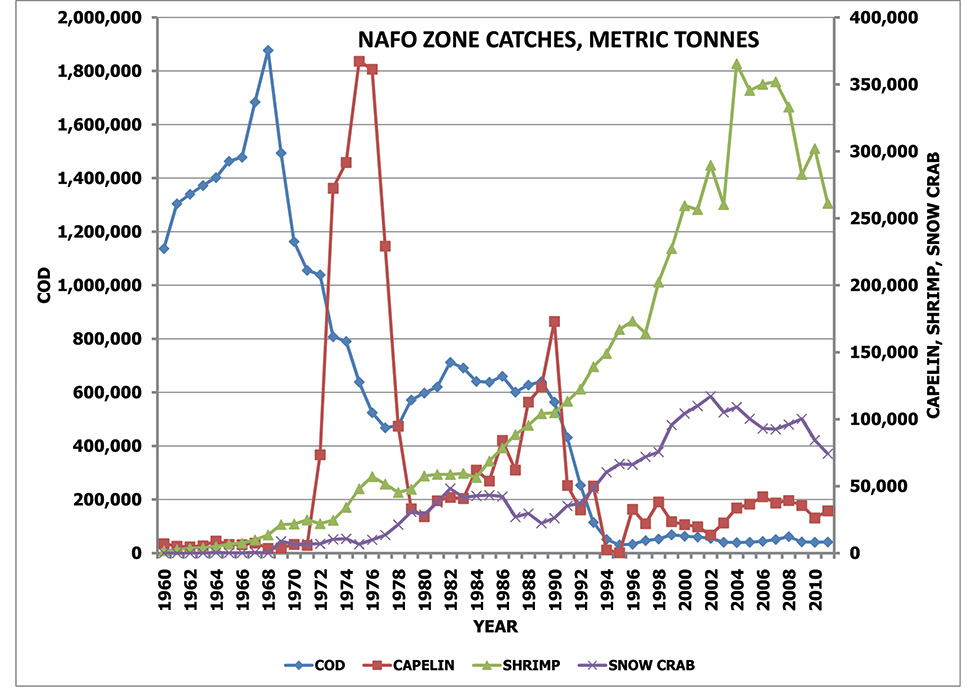 As catches of one species or group fell, harvesters adapted by targeting other species that offered new opportunities. In some cases, those opportunities were presented by a changing ecosystem but, in others, new species attracted attention simply because they became the best available alternative to more traditional species no longer available in abundance.

George Santayana, a Spanish-American philosopher, essayist, poet, and novelist, once said, “Those who fail to learn the lessons of history are doomed to repeat them.” That statement is widely believed to be true, so it is worth reflecting on what we can learn from the history of fish catches in the NAFO zone, as we contemplate a rebuilding cod resource.

First, as important as cod was to development of the east coast of North America, it was far from being the only species of commercial significance. Apart from cod, we had substantial fishing efforts focused on other species that supported land-based processing activities in plants that processed little or no cod. In particular, we have had fisheries and plants focused on redfish, flatfish, herring, crab, shrimp, scallops, and clams.

The diversity of our resource base has been a strength that has allowed the industry to continue to operate, even during times of great change and stress.

It is not a good idea to focus on too narrow a slice of the ecosystem, for the sake of both the ecosystem itself and any activity that depends on it. While cod may be increasing in abundance, we should not create excessive dependence on it.

Fisheries research is now showing that cod stocks are rebuilding and that has gotten a lot of publicity. But what is happening to other species that were important historically?

Second, we need to understand both what is happening in our ecosystem and the effects of our fishing effort on the sustainability of our resources and take both into account in managing our fisheries.

The period covered by the NAFO catch data presented many opportunities and challenges. We have come a long way in understanding our fish stocks and the factors that cause them to rise or fall. Nevertheless, we are now in another time when significant change is underway and there is a lot we don’t know about the causes, rate and effects of change. We need to be careful how we proceed.

Specifically, we have to ensure harvesting capacity is not too large relative to the size of the resource base. That was what happened when foreign fleets depleted our resources and what happened again in our domestic fishery, after the 200-mile limit came into effect. If the capacity exists, people will want — even demand — to use it and that will likely lead to another boom-and-bust cycle.

Third, marine resources may change but human nature tends to remain the same. Presented with an opportunity, we want to take advantage of it. If one opportunity disappears, we look for another one.

There isn’t a lot we can do to manage natural processes, so our best hope is to manage human effort based on them, both to ensure our resources are sustainable and to maximize the value we obtain from them. Unfortunately, history shows we don’t have a good track record in doing either.

Ian Smith, the CEO of Clearwater Seafoods, said it well in a quote included in an article in last month’s issue of The Navigator, “Since the collapse of our ground fishery more than two decades ago, we learned the hard lesson to take less, but create more value by leaving the resource in a better state than we found it. To do anything less, would be short-sighted, misguided and irresponsible.”

Fourth, we have to understand we are no longer a big part of the supply of seafood to world markets. The world has found many ways to obtain fish products since we last had substantial quantities of cod to sell. It will be up to us to make the best of the opportunity the recovering cod resource is presenting.

Overall, as we think about building a future, we need to remember the past and what it can teach us about what we need to do.

No Replies to "Cod and Some Lessons from History"