Cod — Building the Fishery of the Future

The Canadian Centre for Fisheries Innovation will be holding a conference on the theme Cod —Building the Fishery of the Future at the Quality Hotel and Suites in Gander on November 22 and 23, 2017.

We are holding the conference to provide people who expect to be part of the future cod industry with information they will need to prepare for it.

In this column, I don’t usually talk much about the work we do at CCFI. My purpose is more to challenge the industry to think about what we do and why we do it. Other than fish, ongoing change is probably the most significant element in our industry. Because change is constant, we always need to be thinking about where we are going and how we are going to get there. That typically requires innovation — the kind of things we have been doing at CCFI for 28 years. In this case, the purpose of the conference fits well with what I have tried to do in this column.

Back in 2013, the Department of Fisheries and Aquaculture in Newfoundland and Labrador asked us to see what needed to be done to prepare for a future fishery based on Northern cod, in NAFO Division 2J3KL. 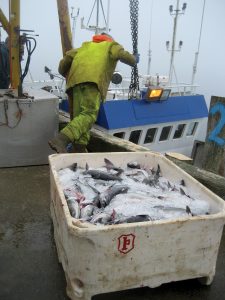 At the time, the principal cod fishery in the province was in 3Ps and things were not going well. The concern was that, if we weren’t doing well with the small fishery in 3Ps, the problems would be even greater in a much larger Northern cod fishery.

Because of the Department’s request, CCFI has done a lot of work related to cod over the past few years. The current dockside grading program and a couple of pilot projects undertaken by the FFAW are pretty much direct results of some of that work. But it is time to share the work we have been doing with more people in the industry and that will be done through the conference in November.

Throughout its history, there have been several different eras in Newfoundland and Labrador’s capture fishery.

Anyone who lived through those periods can testify as to the tremendous upheavals they caused in the industry, the lives of people dependent on the industry, the communities where those people lived and the overall provincial economy.

There is no doubt we are now going through yet another period that will transform the industry into something new.

In Newfoundland and Labrador, the shrimp and crab resources the industry has depended on over the past 25 years have been diminishing in abundance. On the other hand, cod and other groundfish are increasing, taking us back to a resource base more like the one that supported the industry for nearly 500 years before.

Because of our long history with cod, it is tempting to think we know a lot about what we need to do — all we have to do is go back to what we were doing before the moratorium. But nothing could be further from the truth.

For a start, what we were doing for the 15 years or so before the moratorium didn’t really work very well. Practically the entire capture fishing industry in Atlantic Canada went bankrupt or came very close to it in the early 1980s.

After we got the 200-mile limit in 1977, we built an industry that provided poor quality raw materials that could only be used to produce low-value block products. These were then decreasing in popularity among consumers and the market couldn’t absorb our increased output. Our production costs exceeded what we could earn from selling our products — which is why companies went bankrupt and the incomes of fishers and plant workers took a hit.

To make matters worse, we overfished the stocks until the only way out was to impose a moratorium. Not exactly the good old days. We don’t want to go back to that.

In addition, while we have produced only very small quantities of cod over the past 25 years, the rest of the world has found other sources of supply.

Blocks made from Alaskan Pollock — a cousin of our cod — took over the markets we used to serve. Cod increased dramatically in abundance in the Barents Sea north of Norway and Russia, leading to large quantities being caught, frozen, sent to China for processing, and then on to markets around the world, including in food stores right here in Atlantic Canada.

Faced with their own diminishing cod resources, Icelandic companies focused on maximizing the value they could extract from their catches, so they are now selling a large proportion of their output fresh — again, even in Atlantic Canadian stores — and obtaining substantial value from by-products that we historically treated as waste and disposed of at a cost.

Aquaculture has also become a big new source of supply.

Our efforts to farm cod did not turn out well, but the past 15 years have seen a substantial increase in the supply of mild-tasting white-fleshed fish — similar to cod — through aquaculture. Tilapia, pangasius, catfish and even salmon are farmed species that have taken over markets formerly supplied with cod — once more, including markets right here in Atlantic Canada.

Production of these species is expected to continue to increase in the future, mostly in low-wage countries that can offer their products to world markets at low prices.

Processing cod has changed dramatically, as well. Icelanders have led the way, developing new technologies and processing methods to help them maximize value and operate with a very high level of efficiency.

All this means we can’t go back to what we were doing with cod in the past. It simply is not an option. We have to live in the future, not the past, so looking back is not going to help us much.

The experience after we got the 200-mile limit provided a good illustration that the industry is not just about catching fish. It’s about providing markets with food products they want and are willing to pay for. When we couldn’t supply our traditional markets after the moratoriums, they were able to find supply elsewhere.

No one buys our fish just because we catch it.

Because of that, we need to know what potential markets for our cod we can expect now and in the future and what we need to do to crack into them against both old and new competitors.

We also need to know how to catch and process cod in ways that will allow our industry to be successful. These topics will be the principal focus of the conference in November.

Ultimately, the industry of the future will be shaped by people who decide to commit their time to the cod fishery and invest substantial amounts of money in vessels, gear, plants and processing equipment.

To make those choices, they need the best information they can get, because there will be a lot of risk. Our conference is designed to provide that information.

CCFI will be bringing in speakers from other parts of the world, to talk about markets and what others are doing to serve them. We will also have the most up-to-date information about the resource. And we will look at our industry’s readiness to take on the challenge of harvesting cod and selling the products in international markets.

Currently, it seems a large-scale fishery is still five or more years away. That means many people now in the industry will not likely be part of the new fishery. For that reason, we are especially interested in encouraging as many younger people in the industry to attend as possible, because we are going to need young people, if we are going to have a fishery.

Through this column, we are providing advanced notice of the event, so anyone interested in attending can reserve the time in their calendars. Further information about specific aspects of the conference will be released over the next few months.

No Replies to "Cod — Building the Fishery of the Future"