The graph shown here indicates the level of the cod spawning biomass at 1,600,000 metric tonnes in 1962.

Official proceedings of the International Commission for the Northwest Atlantic Fisheries (ICNAF) annual meeting in the mid-1950s showed the scientific council of ICNAF recorded the estimated biomass to be 2,000,000 metric tonnes.

I bring this to your attention in the wake of the recent report of the one-month long survey trip of the Irish research vessel chartered by the present Government of Newfoundland and Labrador. In that report the present total biomass level is estimated to be around 200,000 metric tonnes. 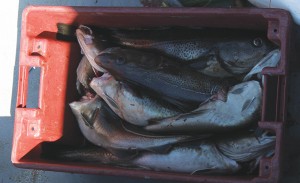 It’s extremely important for the the fishermen and those interested in this cod stock to be aware of the difference between the estimated 2,000,000 metric tonnes spawning stock in the mid-1950s, which did not include cod that are seven years old and younger and the 200,000 metric tonnes indicated in the Report of the Northern Cod Comeback.

The latter report included spawning and pre-spawning cod which indicates the quantity of spawning cod at present is less than 200,000 metric tonnes. 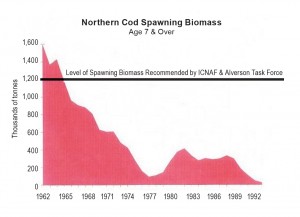 More importantly, there is virtually no valid report on the other cod stocks on the Grand Banks 2 plus 3 areas, which is extremely productive in terms of size and quality. Cod in those areas grow four times faster than cod stock adjacent to Newfoundland and Labrador (Templeman).

Neither is there any reference to the state of cod stocks on the Flemish Cap, St. Pierre Bank or the Gulf of St. Lawrence.

Fishermen and anyone else interested should also take note of the fact there is no reference whatsoever to the other important ground fisheries such as four flounder species, redfish species, turbot, haddock etc…

These species provided the thousands of jobs in plants that depended on offshore fisheries when cod started to decline, beginning in the 1968-1971 time period as a result of extreme foreign overfishing. In actual fact, offshore-caught cod represented only 10 to 15 per cent of the production in those plants.

The month-long survey by a research vessel cannot possibly provide the thorough scientific information required to rebuild our once huge fisheries.

We must realize DFO has practically abandoned its responsibility to scientifically manage our fisheries and only the government of our province can and should confront Ottawa on a continuous forceful basis to restore the infrastructure and the accredited professional personnel required to conduct the necessary year-round research survey programs to determine the state of all fisheries, not just one species.

Foreign trawlers continue to fish, unabated and uncontrolled, the migrating species on the Grand Banks and are concentrating, as usual, in areas adjacent to the 200-mile zone.

There is virtually no public information on this most serious matter which is negatively impacting on any possibility of stock recovery. The Canadian representatives to NAFO have completely failed to inform the public. The fishery is a common property resource and the people should be kept informed on activities by foreign fleets fishing migrating stocks.