Collaboration in the North

Sharing Knowledge About Species and Culture

It’s not everyday that researchers get to learn as much as they teach.

On a recent trip to the Labrador coast, two young biologists from Fisheries and Oceans Canada (DFO) were on a mission to tag Arctic char and look for invasive species and they came back with something much more: An appreciation of how Inuit live off the land.

Team members Sheena Roul and Jennica Seiden had been to Labrador before, but this was their first time working closely with the Nunatsiavut Government and its beneficiaries. 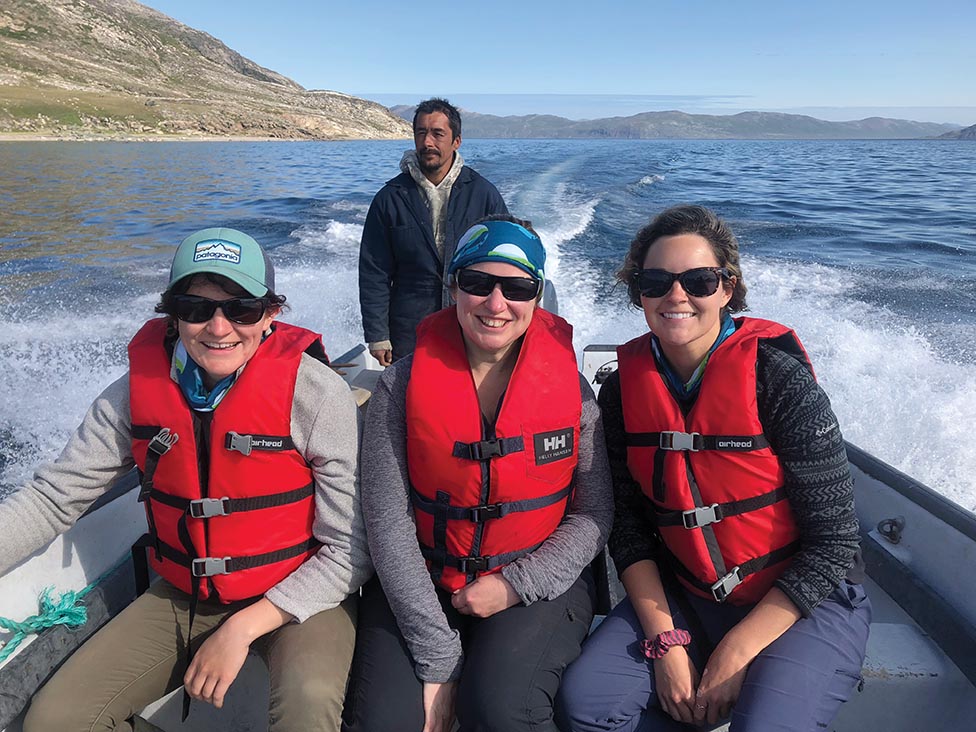 Roul is an aquatic research technician with DFO. In addition to collecting data, she runs the logistics for the field programs and fosters partnerships, including meeting with people in the community.

When the Burin Peninsula native talks about Northern Labrador her face lights up. “Northern Labrador is rarely described as Arctic, but is indeed the Arctic. You go beyond the tree line, they have all the Arctic species, it’s very cold, and is dotted with mountains and fjords. You’re walking into a different part of the world.”

Needless to say, she jumped at the chance to go back there for the Arctic char tagging project.

The first is run by DFO research scientist David Coté and involved tagging Arctic char and the second is headed by Jennica Seiden, DFO biologist with the purpose to look for aquatic invasive species in the area.

The research supports Imappivut, the Nunatsiavut Government’s marine planning initiative for the zone, which is the marine portion of the land claim area that extends approximately 20 km into the Labrador Sea, as well as the adjacent areas out to the Economic Exclusion Zone (EEZ).

Information that DFO gathers from the two projects will be used in conjunction with Inuit knowledge to help understand migration patterns and important habitats of two fish species that are important to Nunatsiavut beneficiaries, Arctic char and rock cod (Greenland cod).

As part of Imappivut, the Nunatsiavut Government is using Inuit and scientific knowledge to determine areas of importance throughout the zone, which could include a network of management zones and marine protected areas that will meet the needs of their beneficiaries, including maintaining a sustainable and successful commercial fishery. 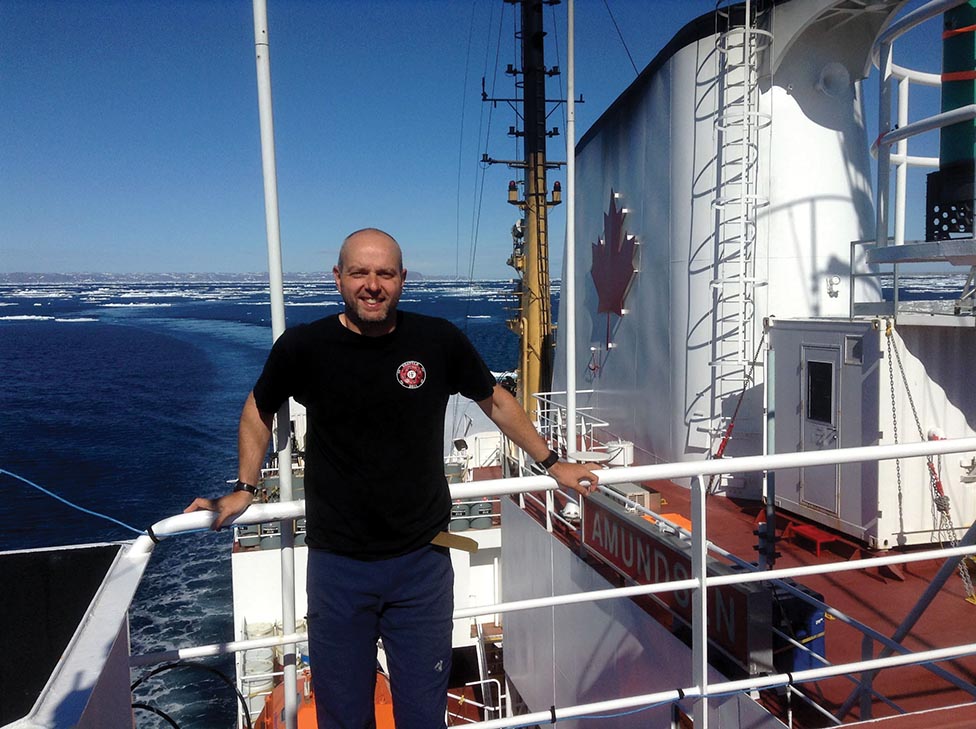 Coté believes that the information produced through DFO’s research will help the Nunatsiavut Government identify important habitats and contribute to decision-making that protects those habitats and the animals they support.

“The Nunatsiavut Government has access to a lot of local knowledge and they also recognize that through a project like this we can provide some very useful complementary data,” Coté said.

The fish in the project are tagged with acoustic transmitters, a device that emits a coded signal that identifies a particular fish and the water temperature it is occupying. These signals are monitored by 44 acoustic receivers that have been placed on the ocean bottom in migration corridors and estuaries up and down the coast. Data collected by these receivers will help them identify hot spots where the char are hanging out.

Coté explained that the information collected from the receivers can also help other researchers that share data through the Ocean Tracking Network.

“If a salmon from the Gulf of St. Lawrence is tagged with the same technology and that salmon swam along the coast of Labrador and happened to pass one of our receivers on its ocean migration, we would detect that fish. When we upload our data to the Ocean Tracking Network data portal, the researcher that tagged that salmon would be notified that their fish was detected in Labrador.”

Other DFO researchers are using genetics to determine the chars’ river of origin, which when combined with the telemetry data, can provide a good picture of how different char stocks mix and if they use other freshwater systems to overwinter in years when they aren’t spawning.

Such information is important to managing a sustainable fishery since a particular fishing area may end up targeting several different populations of fish. Additionally, Arctic char and rock cod are critically important to Labrador Inuit and understanding these species will help the Nunatsiavut Government and others make decisions that ensure the longevity of these species.

Another goal of the project is to study aquatic invasive species, something that’s never been done in Labrador as limited information exists for Labrador. Seiden is a biologist with the Aquatic Invasive Species Program.

Invasive species can outcompete and displace naturally occurring species (e.g. voracious green crab can outcompete native crab species for food and have a tendency to destroy important fish nursery habitats like eelgrass while they feed).

According to Seiden, it was a secondary project on this trip to Labrador, but still connected. “All the systems are linked,” she explained.

“To have healthy fish populations, you need healthy habitats to support them.”

They used three different techniques to detect invasive species: green crab traps; settlement plates, which are square, PVC plates on an anchored rope that provide an attachment surface for larva and sampling for genetic material in water — a technique known as environmental DNA (eDNA). The latter is also useful for identifying the presence and distribution of native species in this poorly studied area.

So far, the traps haven’t turned up any green crab. The settlement plates will be used to look for invasive tunicates, which are filter feeders that grow quickly and can smother areas such as kelp beds and eelgrasses and other filter feeders like clams and mussels. These won’t be ready for collection until next year.

Seiden says preventing the spread of aquatic invasive species starts with education and awareness and that was a big part of this expedition.

“I am extremely passionate about including Labrador in this program and working with the people who live in the communities.”

“Labrador is starting to see changes with climate change and an increase in vessel traffic so getting this baseline information is extremely important.” 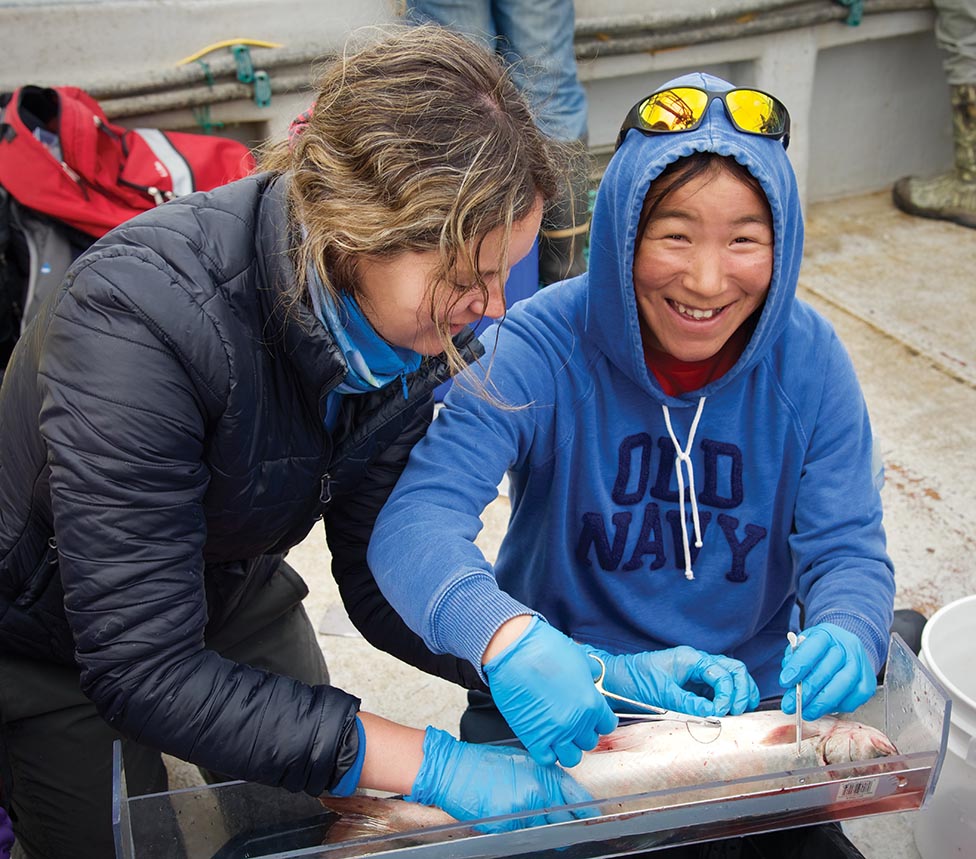 During this trip, the team saw a cruise ship sail in through Saglek Fjord. They also saw four kayakers from Quebec ‘in the middle of nowhere’ who’d been out there for two months and a sailboat from Maine that was making its way all along the Labrador coast. If the water is opening for ships and tourists, Seiden points out, it’s also opening for invasive species, who often hitch rides to new areas on vessels.

Both Roul and Seiden were excited about the science, but they were just as excited about working with community members, particularly youth. This is why they called this trip a rare experience. That’s because the Nunatsiavut Government ran a Food Skills and Research Assistantship Program at the same time as their research project. That meant mentors, like Roul and Seiden, spent five days with a group of youth who came on the boat with them in the morning, spending 10–12 hour days, helping with every step of the program including fish capture, surgically implanting transmitters, genetic sampling, eDNA sampling and crab trap harvesting.

“We showed them hands-on how to do some of the field sampling and I think we inspired them and got them excited about science,” said Seiden, proudly.

“Some of them have expressed interest in working as researchers, boots on the ground, in their own communities.”

As part of the program, community mentors were also teaching youth how to catch fish, what to do with the fish when you catch it and generally how to live off the land. “In terms of how they use food, it goes beyond just eating the fish,” said Roul.

“When on the land, they eat fish, meat, local plants and berries and often use animal hides to make warm clothing.”

“This was my fourth time in Northern Labrador, but I’ve never had the opportunity to experience the culture as much as I did this trip,” she said.

“We really felt like we were doing science for the people. Usually, as technicians, we go out, collect data, no one knows we’re even there, we go back to the office, analyze the data. You normally don’t get the opportunity to work five days side by side with a community group.”

“We learned just as much from them about their culture, as they learned from us about the research. It was a rare and special experience for us to get firsthand knowledge of how people use the land,” Roul and Seiden added.

“As much as we love doing the work, it was a real highlight to work with all the beneficiaries and the youth,” added Seiden. “It was inspiring for us to see how excited they were about the positive impact.”

Credit for the Food Skills and Research Assistantship Program goes to Kristeen McTavish, who is the Regional Food Security Coordinator with the Nunatsiavut Government.

She worked with elders, knowledge holders and mentors to lead the pilot program. They created it to promote confidence and self-sufficiency for youth and expose them to a diversity of knowledge and experience around environment, food and their traditional territory.

There were 14 youth, aged 18–30 and all of the Nunatsiavut communities were represented: Nain, Hopedale, Postville, Makkovik, Rigolet and the Upper Lake Melville Region.

“The participants continually expressed how happy they were to be there, and how much they were loving the experience. We set out to bring youth together and give them the opportunity to learn land, food and research skills but we achieved so much more,” McTavish said. “Participants have been keeping in touch with each other, but also with the mentors and researchers and they are showing their family and friends some of the skills they learned.”

“They loved learning from the researchers and were so eager to try out the different equipment and techniques,” she added. “Some of the participants have also followed up with us about research and environment related career options.”

The program was such a success they already have plans to run a winter/spring program as well. “We are looking forward to taking the lessons that we learned from our pilot program and continuing to provide these types of meaningful experiences for Nunatsiavut youth.”

According to Roul and Seiden, Nunatsiavummiut (Labrador Inuit) are very concerned about food resources. They harvest a lot from the land, making it very important to protect certain areas and to protect species like Arctic char.

“They are very, very connected to the land and to the ocean,” Roul noted. “You would hear people say ‘we really miss wild food. Wild food gives us energy. Wild food makes us feel good.’ So, it’s not just healthy, it’s also an emotional connection.”

She also explained that the collaboration with the Nunatsiavut Government is very unique. “Nunatsiavut beneficiaries want to see management happen, so they asked to work with DFO to look at the primary species that they harvest. From working with Inuit, it became clear that they are very in tune with what they want to harvest but not overharvest, and they want to be able to eat the foods that they’ve always been eating.”

The Nunatsiavut Government is also interested in rock cod, so DFO is scheduled to tag individuals of that species in Nain Bay next year, which will be tracked by the same receivers deployed to monitor Arctic char.

As for the Arctic char project, the plan is to return next summer, pick up the receivers and download the data. They’ll also retrieve all the settlement plates. Roul believes it will take a couple of years to get some good baseline data but she’s excited about the future of the project.

“When you work in a province where people are so reliant on the ocean, it makes it very easy to love your job because every day you know you’re doing something that can help the people of the province and help the environment.”

Combining Fishfinders with Underwater Cameras: The Future of Scientific Surveys?

MPAs Continue to be Works in Progress

No Replies to "Collaboration in the North"