Combining Fishfinders with Underwater Cameras: The Future of Scientific Surveys?

“What is that red spot on the screen?”

This is a question that every mariner and fishery scientist using fishfinders has been asked. While experience and knowledge of the ecosystem help provide some clues, we cannot be certain without further identifications.

Fisheries scientists use scientific echosounders, also known as fishfinders, to survey the distribution and abundance of fish throughout the world. It is important to know exactly what species are detected by the echosounders and scientists most often use trawl nets to groundtruth the acoustic signal.

However, this technique is invasive. A question arises: can we develop new techniques to validate acoustic observations while leaving the fish in the water?

Answering this question was the goal of a pilot study conducted recently in Bonne Bay, on the west coast of Newfoundland, by scientists from the Centre of Fisheries Ecosystems Research within the Fisheries and Marine Institute of Memorial University.

The fjord of Bonne Bay was carved by the retreat of glaciers at the end of the last ice age around 10,000 years ago. Its waters are incredibly rich and productive and support valuable lobster, snow crab, cod, herring and mackerel fisheries.

Acoustic echograms and camera footage of cod and capelin.

In the first week of October 2018, our team towed the coastal research vessel Gecho II across Newfoundland to conduct a two-day acoustic survey of Bonne Bay. The truck was loaded with a new high-definition submersible video camera built by the Clarenville-based start-up SubC Imaging. 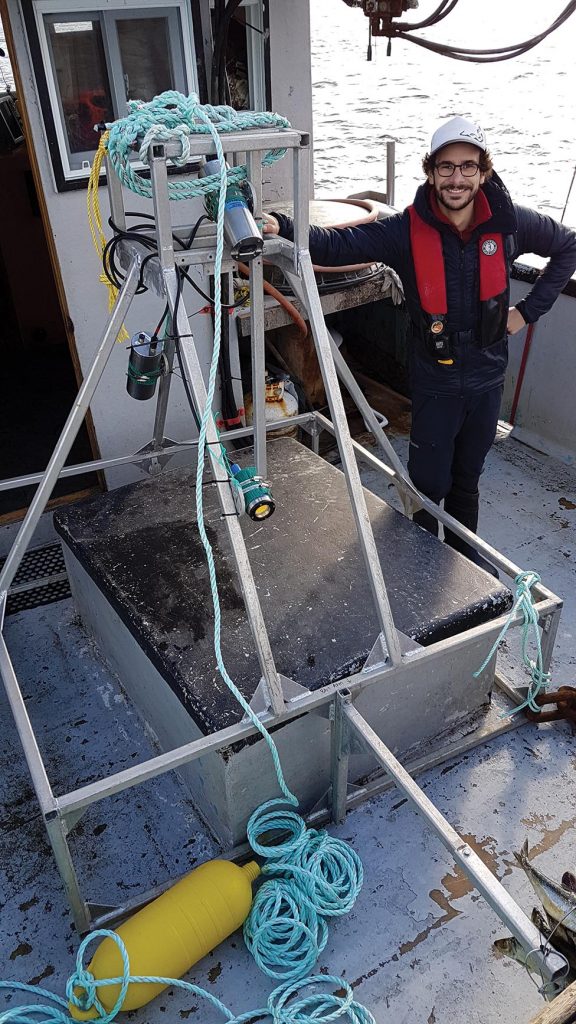 We arrived at Memorial University’s Bonne Bay Marine Station late at night and were glad to learn that the favourable weather forecast was holding.

During the next two days, half the team sailed back and forth across the bay aboard the Gecho II with its calibrated scientific fish-finder pinging at two frequencies (38 kHz and 120 kHz).

Meanwhile, the other half of the team worked with local fish harvesters from Trout River aboard a 35-foot vessel to deploy and retrieve the camera.

We mounted the camera on a large aluminium frame and placed herring bait within the camera’s focal length. The team positioned the camera just above the seafloor for five to six hours at locations where the fish finder detected dense fish aggregations.

Thanks to the good weather window, we covered Bonne Bay twice with the fishfinder over the two-day survey and deployed the camera four times at different depths to validate the acoustic signal. Acoustic echograms and camera footage revealed quantities of capelin, codfish and a few herring schools.

The results from this pilot-study are promising. Yet, the design can be improved and we plan to go back to the magnificent west coast of Newfoundland next year to test new ideas to deploy the camera in the middle of the water column to better identify schools of pelagic fish such as herring and mackerel.

In the future, combining fisheries echosounders with baited cameras could become a common non-invasive approach to monitor fish abundance and distribution in coastal areas.

Collaboration in the North

No Replies to "Combining Fishfinders with Underwater Cameras: The Future of Scientific Surveys?"