Every day, people head out to the bright blue sea to work.

Our earth is covered with 326 million trillion gallons of water, with 70 per cent of it ocean. This could be the largest workplace in the world and while there is a vast array of jobs on the sea, it doesn’t mean you have to pick just one.

“We’re always looking for good people,” says Wade Spurrell, Assistant Commissioner for the Canadian Coast Guard in the Atlantic Region, “We do actually hire people right off the street for some jobs.”

Does he mean ‘right off the fishing boat?’

Pretty is a licensed commercial fisherman who fishes all species. In between his fishing times, he works as a deckhand with the Canadian Coast Guard.

“If you have the skills that we need for specific jobs, if you’re a professional mariner and you get all your certifications,” explains Spurrell, “You can probably move into the fleet or a fleet support job relatively easily.”

David Pretty started with the Coast Guard in 2009 and he agrees to a point. “You know, fishing certainly helps, but there’s a lot to learn with the Coast Guard. When you first start, you know your way around a boat but it’s a different thing to get into.”

Back in the 1980s, David Pretty may not have been thinking about getting into the Coast Guard, but he was thinking about upgrading his fishing skills. Off he went to the Marine Institute where he received his Fishing Master Class IV ticket. He did medical, marine first aid, and lifeboat safety courses.

“When I went and began with the Coast Guard, you know that certainly helped me get in with them guys.”

Pretty is not the only fisherman to look to the Coast Guard for seasonal work. 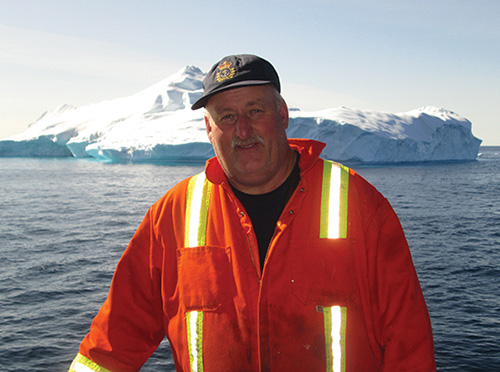 David Pretty is a licensed commercial fisherman who works with the Canadian Coast Guard during his off-season.

Joe Houlihan, a 56 year-old from Flatrock, told some of his friends back in 2009 that he was going to work with the Coast Guard. A few of them ribbed him and said, “I suppose you’ll be up to skipper next week.”

Houlihan is still a deckhand and not the skipper, and he wishes in some ways that he had started his Coast Guard career sooner. “If I had to go in 1992 when the moratorium happened, well I wouldn’t be retired but I’d have put a lot of years in,” Houlihan says. “I kept on fishing and it was slow.”

Both Pretty and Houlihan admit it’s nice being your own boss but there is something to be said for having a steady paycheque.

“The hardest part with fishing is that you don’t know when you’re going to get your pay. You could go out tomorrow and get nothing and you could go out the next day and have a good week or a bad week,” says Joe Houlihan, “But with the Coast Guard, you know every two weeks your cheque is there and you have that security. I’ve been fishing 30 years and I’ve never had a paid holiday or time off. Now I get paid for my holidays and I get time off.”

Joe Houlihan likes the flexibility that working with the Coast Guard provides around his fishing enterprise. “The way fishing is now, you have to keep dates open certain times. My dates changed this year so I phoned the office and they helped me out. I’ve got to say, they’ll accommodate you when they can and if not, then they’ll call whoever is next in line.”

But last July, while working on the CCGS George R. Pearkes, did they ever travel.

“The last trip we went on was over 5,500 nautical miles. We sailed to Greenland up the coast two or three times, and came back went down to Baffin Island, and went into Hudson’s Bay, and had a crew change there in Northern Québec”, says Pretty. “Now, that was quite a steam, right.”

While these two men, who have fished for over 60 years between them, bring their fishing and boat handling skills to the Coast Guard, it’s interesting to learn what skills they’ve taken home with them. 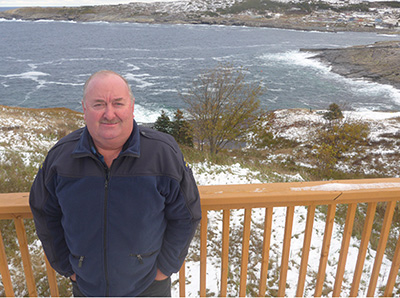 “Well, one thing for sure — safety, safety, safety. When I’m going fishing now, I put on a life vest because I’ve learned it from the Coast Guard,” says Houlihan.

“Well, I certainly put more emphasis on safety,” agrees David Pretty. He had a close call in 1998 when a rope wrapped around his leg as he threw over a 250-pound anchor — it dragged him 70 metres to the bottom of the ocean. He kicked off his boots and pushed off from the ocean floor and he is lucky to be here to tell that frightening story.

“You know, I’ve fished for over 30-odd years and I still don’t know how to swim. But when I go out by myself, I use more common sense now. And I have a life jacket and I certainly know the preparedness steps for an emergency at sea. I always have flares with me now and a cell phone and extra warm clothes and that kind of stuff if I ever do run into trouble.” says Pretty.

This is one of the reasons that Pretty likes working for the Coast Guard. He knows what it’s like to be in distress at sea and, “Knowing that you are there to help people if they are in distress if ever the need be. And to work as a team and to be employed by your country — you know it’s a bit of an honour to do that, right?”

Houlihan enjoys the job. “I like being on the water and I like meeting new people. There’s a lot of people like ourselves, you know. They’re from around the bays and Nova Scotia and the east coast everywhere. They’re good people to get along with. And everybody has their job to do. If you got a good crew, it makes the time go way quicker. Everybody works together. Get along. Like I always said, get along and get a paycheque. That’s our motto.”

Assistant Commissioner Wade Spurrell is glad to have folks like David Pretty and Joe Houlihan coming on board with the Canadian Coast Guard. “It’s a great and challenging career with a good lifestyle, and finding the right people for those jobs is critical to providing the services that Canadians expect.”

It’s clear that David Pretty and Joe Houlihan are two of those right people. Maybe you’re one of the right people, too?

No Replies to "Complementary Careers: The Best of Two Worlds"