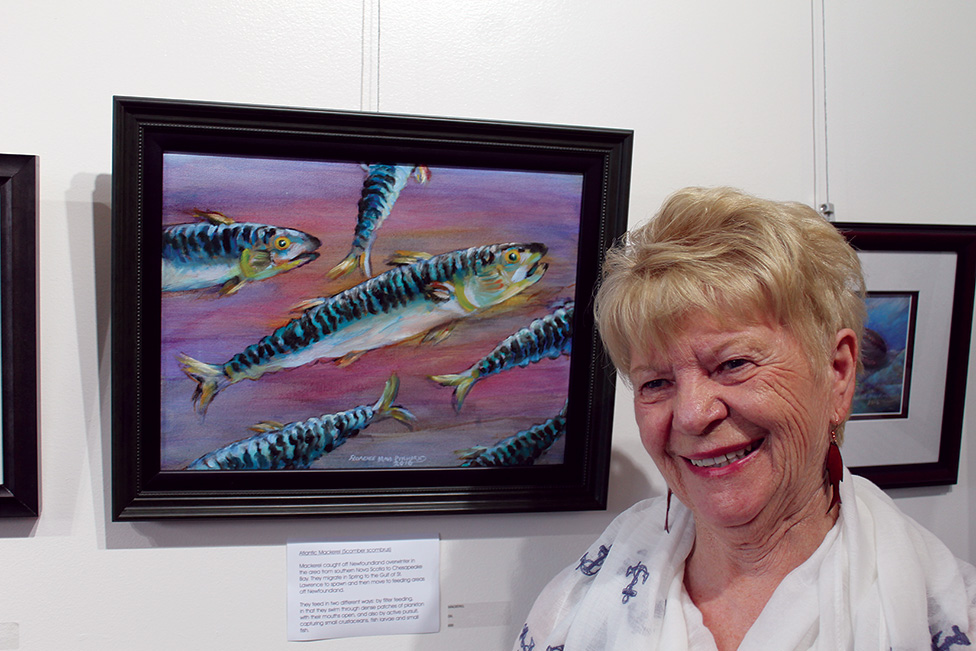 Perhaps she never will, but a view of moonlight shimmering on the Northwest Atlantic Ocean in full view of her artist’s studio, the Island Rock Studio, in Winterton, Newfoundland, was the seed that grew her most recent solo art exhibit.

“My husband and I were upstairs in the studio one night enjoying a glass of wine, looking out over the sea and watching the moon on the water and we started talking about the fishery. My husband, Al Pinhorn, is a fisheries scientist and he was telling me about his thoughts on the fishing industry. I was listening and, I guess, making mental notes. So the next day I wrote down my thoughts about what he was saying and he said it was pretty good. I showed it to my son, Paul, and he also thought it was fine so that started the idea for an art exhibit with fish as the central theme,” she says. 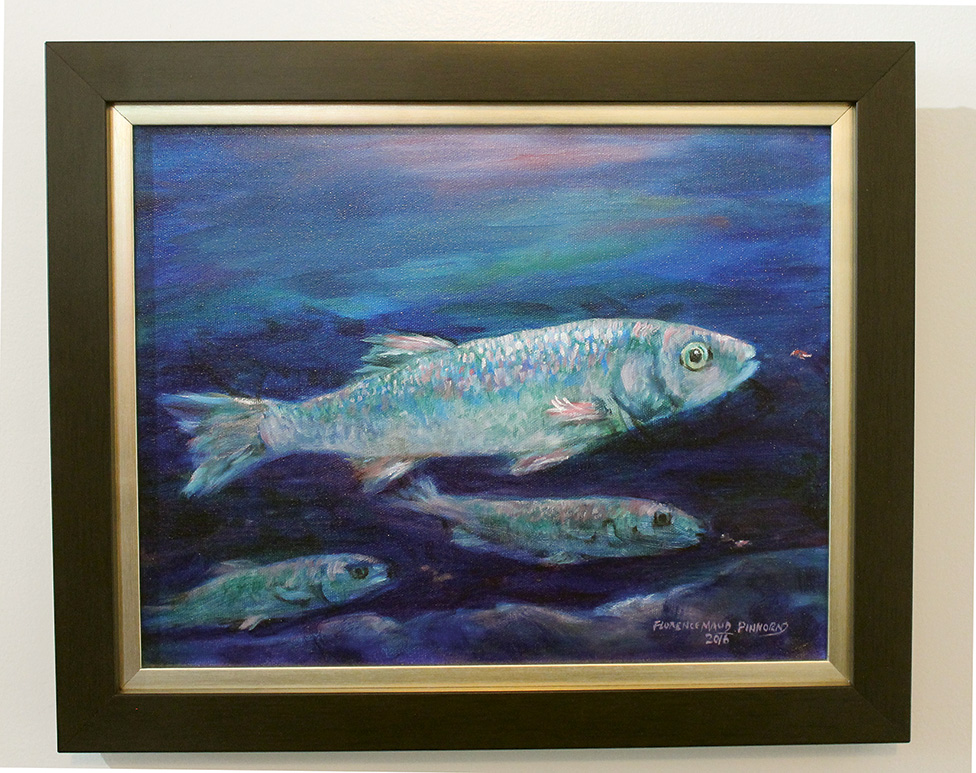 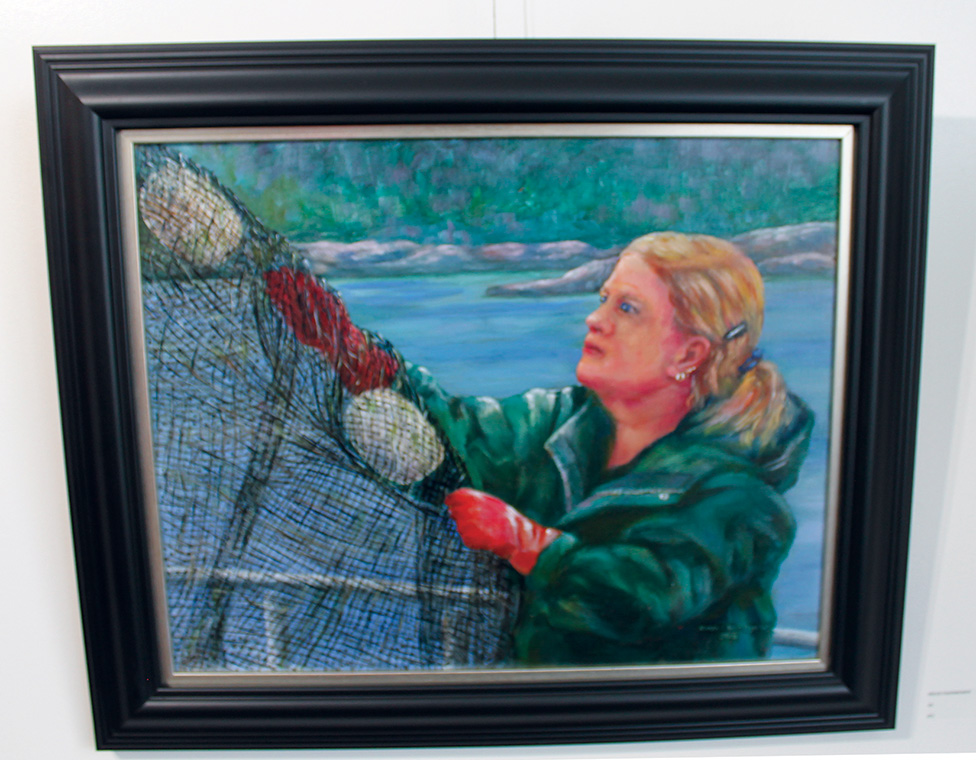 Concerning multi-species, a 21-piece exhibition was officially opened at the Ocean View Art Gallery in Carbonear on August 5 and ran for a week and a half.

Visitors were treated to marvelous paintings of various species. Viewers were also given an opportunity to learn a few interesting tidbits about the fish on display.

Short notes located next to the painting explained things such as the fact that redfish live up to 40 years and that, unlike other flatfish, turbot can swim vertically because their eyes did not migrate as far to the right side of their body in early development as in other flatfish. This also allows them to see forward.

Viewers also learned that turbot migrate to deep waters in the Davis Strait to spawn in depths of 650-1,000 metres. And, did you know that after lumpfish spawn, the females leave and the smaller reddish colour males are left to guard the egg mass? 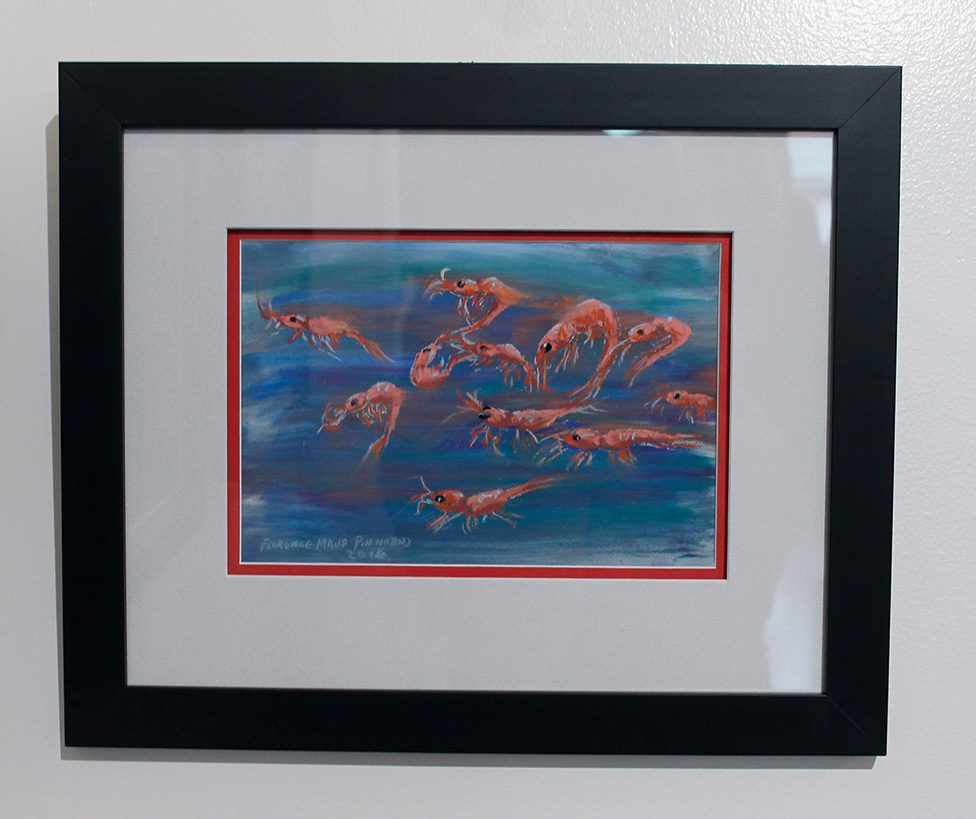 Another interesting piece of fish trivia explained that Northern shrimp are hermaphroditic. They start life as males and at age four, transform into females and remain so for the rest of their lives.  Florence is quick to credit her husband for the scientific input.

Florence Newhook (Pinhorn) knew as a child she wanted to paint professionally. She was always fascinated by colour, texture, light, movement and form and in coastal Newfoundland, there is no shortage of all the above.

“Few things are more thrilling than creating a piece of artwork, whether capturing the suns reflection on a bucket of berries, a child’s expression, or the drama of a startling landscape,” she says.

Her art comes from the wonder of life and nature, or as she puts it, “a constant search for seeing and understanding.”  Her art definitely reflects her sense of place — nobody has to wonder where she’s from or what her influences were. 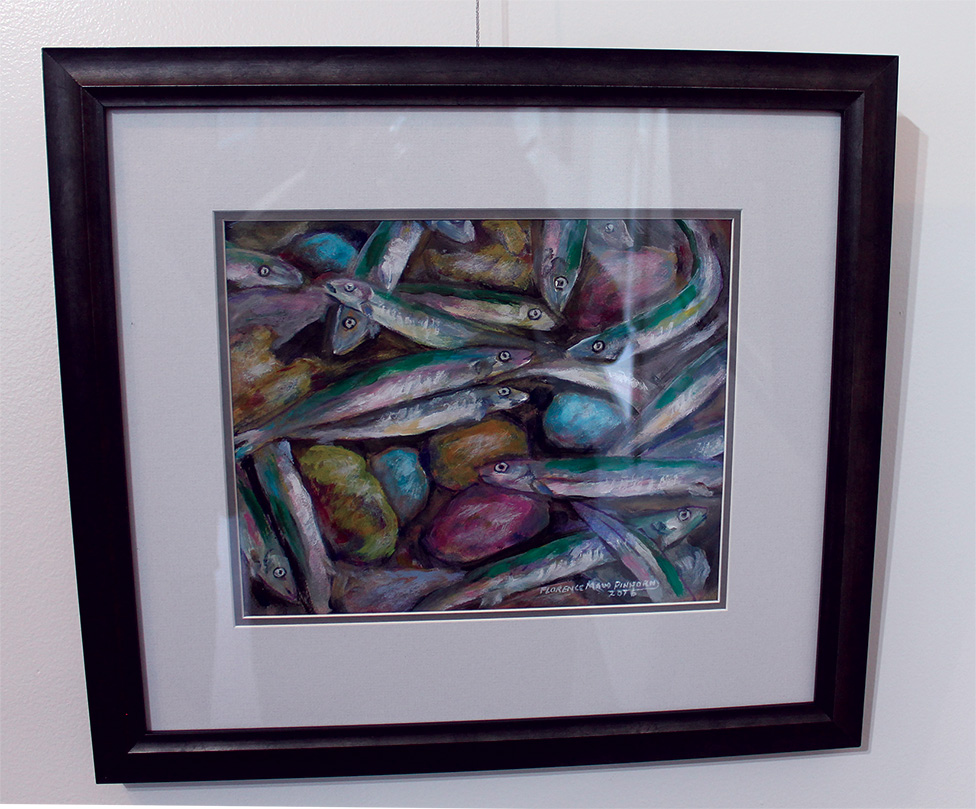 Paintings of fish species ranging from jellyfish to capelin, along with other influences of both land and sea have always been part of her work. A painting called Child of the Glacier is a beautiful acrylic on canvas of an iceberg while one titled A Day in June, Bay St. George depicts a rough water scene.

Her love of nature in the broadest sense is also evident in all her art. There are paintings of Newfoundland pitcher plants, fireweed, lupins and lilacs along with ponds, walking trails, brooks, berries and berry pickers. 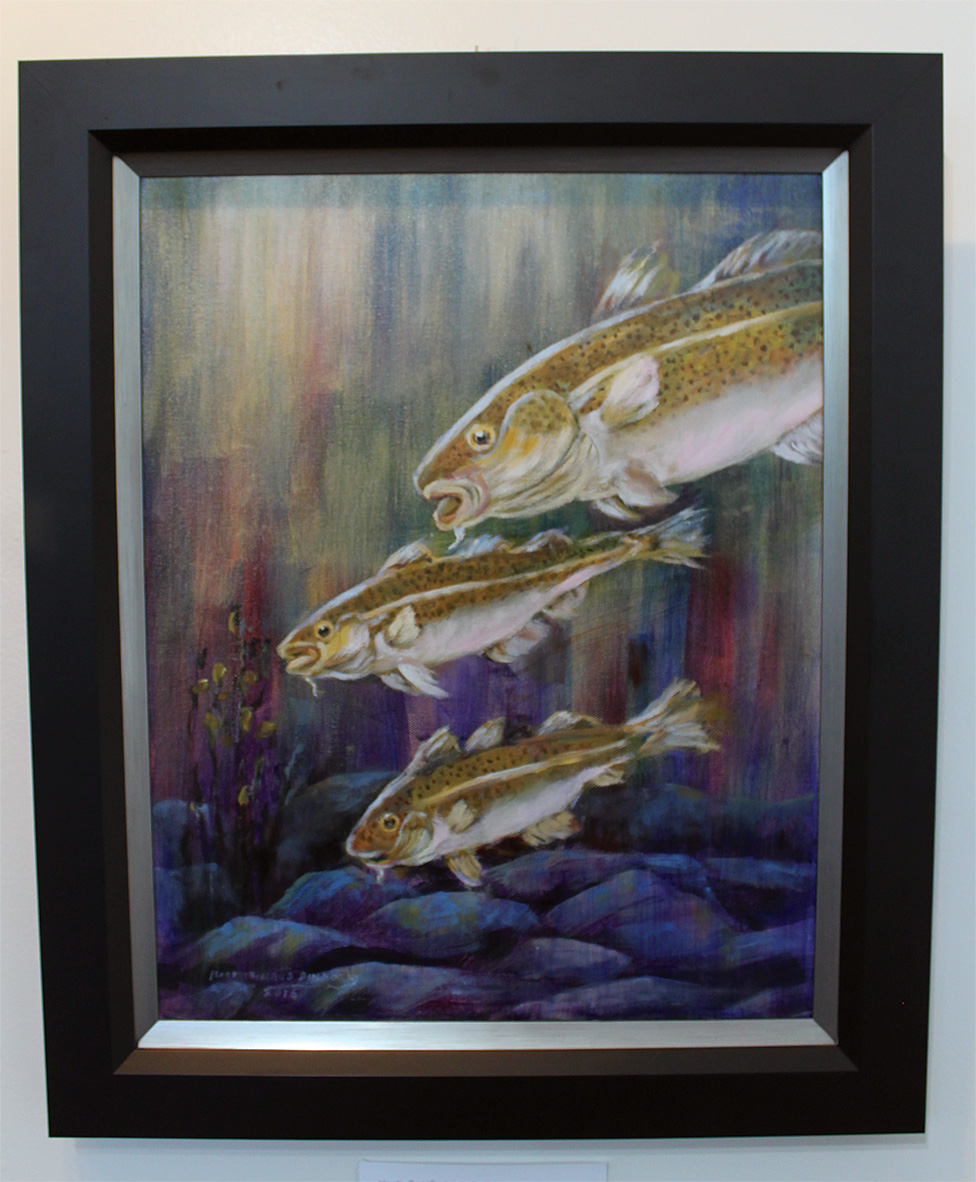 It’s easy to see in Florence’s work that she was deeply influenced by her marine environment growing up in Norman’s Cove, Trinity Bay.

Along with paintings of fish you will see paintings of old-timers overlooking the harbour at sunset, fishermen building punts and seascapes.

“My grandfather Newhook was a fisherman and I spent a lot of time with him but, you know, besides that, Norman’s Cove beach was my playground really.”

The Newhooks of Trinity Bay are also well-known for their superb skills in the art of boat building dating all the way back to Charles Newhook who settled in Trinity when he arrived from England in the 1700s.

Florence recalls drawing and sketching in school when she should have been paying attention to math or history.

“I remember my teacher walking by my desk and I’d be drawing the face of Henry the Eighth or something and he/she would say; ‘this is not an art lesson Florrie.’”

Florence knew she wanted to be an artist but there was no place to study art in Newfoundland when she graduated high school.  She wasn’t from a rich family that could support her traveling to the mainland to pursue her dream so she “put the idea on the shelf” for a while.

Later, as a wife and mother, there was even less time or opportunity to pursue her artistic interests in a serious way although she says she managed to do a “little bit of painting” while raising her family and also took lessons from several accomplished Newfoundland artists including Gerry Squires, Scott Goudie, Lloyd Pretty and Ed Roche, to name a few.

When her youngest son Jamie left home, Florence says she had a tough time dealing with empty-nest syndrome.

“So, I said to my husband that I wanted to pursue my dream of studying art and he got behind me one hundred per cent. In fact, I probably would have quit several times but he kept encouraging me to stay with it.”

In the early 1990s, Al Pinhorn was working on a fisheries research project with a scientist colleague from Nova Scotia. The project meant Al had to spend a lot of time in Halifax and that was when Florence saw a window of opportunity. 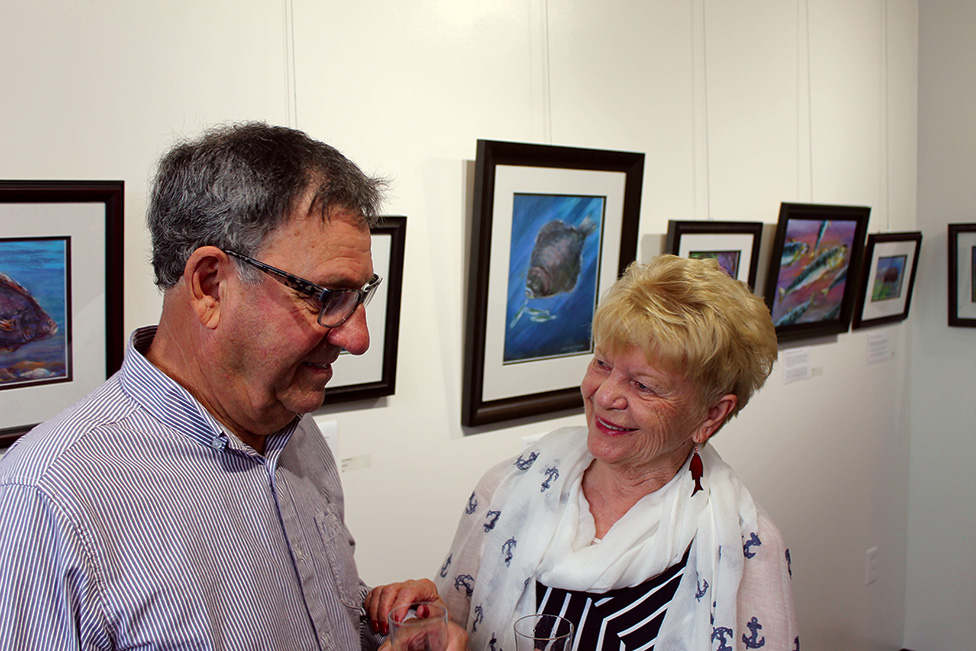 Florence and her husband Al.

Joining her husband on his trips to Nova Scotia, Florence contacted renowned artist Barbara Dorey. For Florence it was a dream come true. Not only was Dorey an extremely accomplished artist, she excelled in several of Florence’s favourite artistic interests, including oil, pastel, watercolor and portrait.

“She was truly wonderful — both as a person and artist. She taught me about portraiture, she taught me values and colour and harmony and the laws of many things pertaining to art.”

Still deeply true to her training in what makes good art, Florence says art is going in different directions these days. She grumbles that it seems anything can be considered art, although there is no particular structure like the traditional methods of what made classic artists great. But she conceded that, like music, it is probably just part of the evolution of the craft, adding that there may also be a touch of generational influence tinting her opinions.

“I’m not as young as I used to be you know,” she smiles, adding a gentle caution that I really didn’t need to tell her age.

As for the fishing industry, Florence says she has learned a lot from her fisherman grandfather, her fisheries scientist husband and her son Paul who is one of the owners of the TriNav Group, a consortium of nine companies directly involved in the commercial fishing industry in Atlantic Canada and the Eastern Seaboard of the U.S.

She certainly has learned enough to have formed strong opinions about the business.

In conversation with some of the approximately 250 people that showed up for her exhibition launch in Carbonear, she talked about the technological changes in the harvesting sector, the expansion from what was once an industry almost totally dependent on one or two species to multi-species operations today. She is also puzzled about government’s lack of proper attention to the fishing industry. 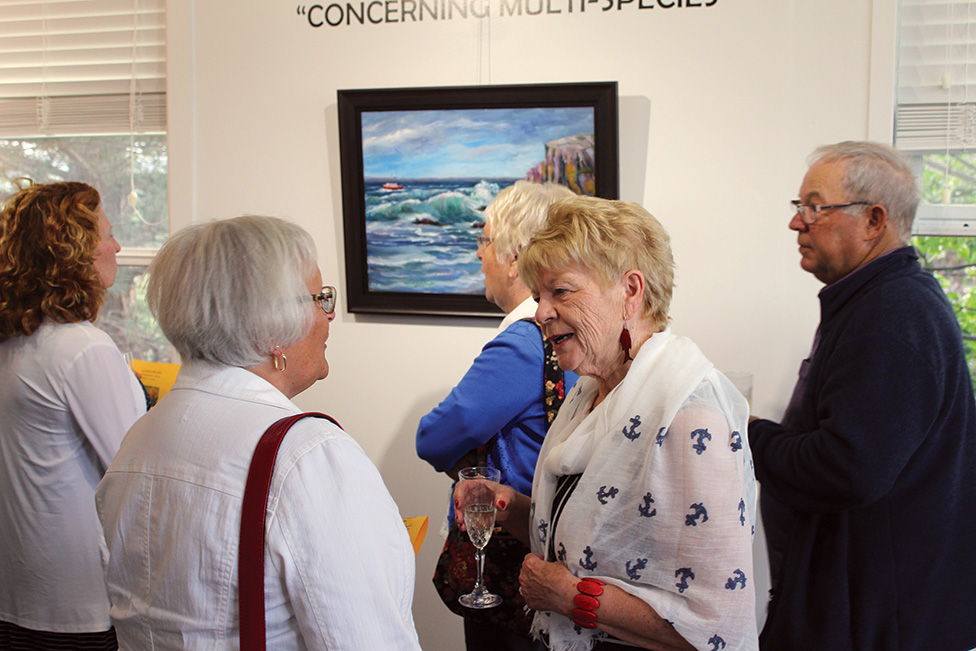 “It puzzles me why government puts so much emphasis on developing the oil industry and not enough on the fisheries which is a renewable resource.”

Florence suggests this may be her last solo exhibition. She says preparing for solo exhibits like this one requires several months of work.

“It’s hard work too, especially for someone at my age, but I’d like to continue working and perhaps I’ll do some exhibits in conjunction with other artists, perhaps contributing three or four of my paintings — I’d like that.”

Despite not being “as young as she used to be” it’s doubtful that Florence’s Carbonear exhibit will be the last we hear of this very talented artist — at least we certainly hope not.

To see more of Florence’s work, visit her website at: www.islandrockstudio.com.

No Replies to "Concerning Multi Species"