“Far out in the ocean, where the water is as blue as the prettiest cornflower, and as clear as crystal, it is very, very deep… we must not imagine that there is nothing at the bottom of the sea but yellow sand.” wrote Hans Christian Andersen in The Little Mermaid.

With 71 per cent of the earth covered in oceans and less than five per cent of that explored, it’s no surprise that we still imagine, investigate and make new discoveries about what lies deep at the bottom of the sea.

Take corals for example. You probably think of bright blue waters in tropical locations where you can snorkel and scuba dive amongst the colourful coral reefs.

Would you believe that corals grow on the sea floor of the cold dark Atlantic Ocean? While they have been around for about 250 million years, corals weren’t officially documented in the Atlantic until 1887. 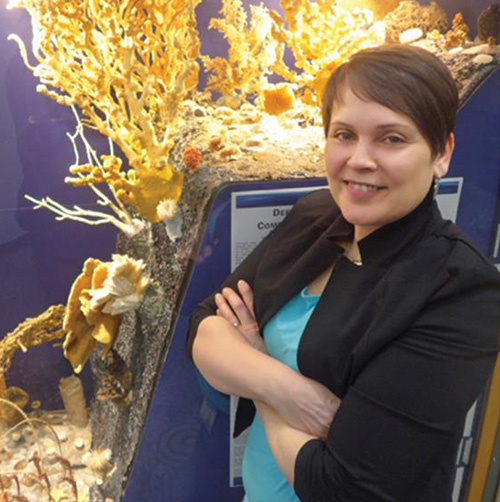 Vonda Wareham has been studying deep-sea corals off the coast of Newfoundland and Labrador for over a decade.

Fisheries and Oceans Canada (DFO) began researching corals in the late 1990s. To tell the story of Atlantic deep ocean coral research is Vonda Wareham, a marine biologist with DFO.

“It started in Canada in the Northeast channel off the southern tip of Nova Scotia with fishermen going to Dalhousie University and to DFO,” says Wareham.

“They were saying we’re bringing up these large trees and the draggers are destroying them.”

These fishers had nicknamed the area they were fishing “the strawberry grounds,” where unbeknownst to those above the water, a soft coral was growing at the bottom of the sea.

“They were dragging up chunks of corals that had taken hundreds and thousands of years to grow, says Wareham, “Fishermen knew way before the scientists did in Canada and they were saying the draggers are destroying our grounds. And they were right.”

Wareham’s ties to the sea go way back. She is from a long line of fishermen and has all her grandfather and great-grandfather’s boat tools hanging in her garden shed.

She lucked into a summer job in B.C. as a deckhand aboard a salmon trawler and says, “It was the hardest job I ever had, but I wanted to do it to see how fishermen’s lives were. If I was going to be preaching about conservation of natural resources I had to walk a mile in the other person’s shoes before I can start criticizing or adding advice as to how things are harvested from the sea.”

In 2004, Wareham wanted to go home to Newfoundland and she applied to Memorial University of Newfoundland (MUN) for graduate school. She packed up her Toyota Tercel and on the dash she placed pieces of pinecones and rocks from her beachcombing expeditions.

Her boss at the boatyard gave her a few corals as a goodbye present. One was, “a beautiful branching coral stuck off on a 45 degree angle.” She made a spot for her corals in the backseat and headed east. On her way, she got a call from Dr. Evan Edinger at MUN. “He introduced himself and said, ‘how would you like to study deep-sea corals?’”

She told him she had applied to MUN and didn’t know if she’d been accepted. Dr. Edinger told her, “If you accept this position you will be accepted to the grad program.”

“Corals chose me. I didn’t choose them,” says Wareham, “Now granted, I’m glad they chose me. Most people choose their graduate studies based on something that they’re interested in, but I did it the completely wrong way. I chose it because it was Newfoundland and I wanted to come home.” 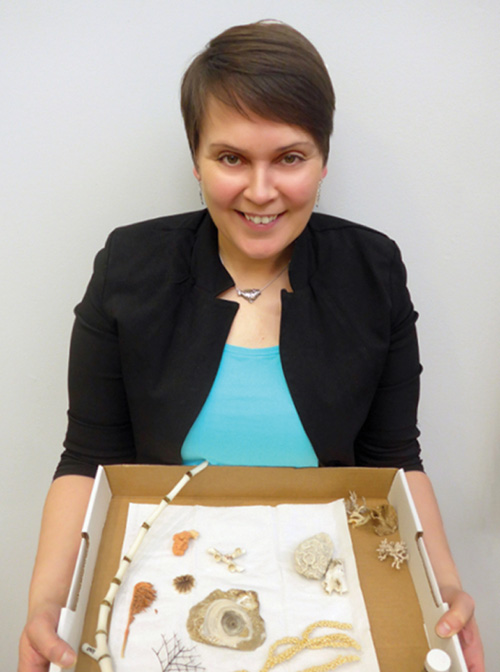 Vonda Wareham with her collection of corals

She arrived home at the end of August and started school at MUN in the first week in September. “Going back to school was exciting,” says Wareham, “but no one knew anything about corals. We didn’t know we had corals.”

There are many things about corals that people don’t know. They are tiny living animals and they exist as a colony made up of genetically identical individuals or as a solitary animal. And they’re like us, with their daily routines. They eat and fight off predators and mate. That’s a day’s work and all at the bottom of the sea.

“Cold water corals found here are down anywhere from 200 to thousands of meters deep,” says Wareham. “They have little tentacles that have filaments that are kind of sticky and they like to settle where there’s strong current. So the food is delivered to them. They catch the marine snow or particles in the water and feed it down into a very simple gullet system.”

Deep-sea corals are ecologically significant and provide benthic habitats for a variety of deep-sea species. The benthic layer is the ecological region at the lowest level of the water column next to the sea floor.

Vonda Wareham likes to explain corals’ importance with this analogy.

“Think of trees and forests. You have individual trees and you think of how birds use trees. They use it to lay their nests and to raise their young. It’s great to forage for food. It’s a great place to hide from windstorms, rain, and weather. It’s a great barrier between you and larger predators that are trying to eat you when you’re young,” explains Wareham.

“We believe the fish use corals like birds use trees, so if you think of the individual trees versus the forests, there are underwater forests in the ocean, and gardens, and meadows.”

A tour of these marvelous underwater gardens would be great, but to Vonda Wareham that’s one problem with getting people to understand their significance.

“Out of sight and out of mind! I think that’s why I keep carrying around these different pieces of coral and why I keep posting pictures all up the hallways, just to show people that we have this in our backyard.”

She’s carrying a lid from a banker’s box and laid inside like bits of treasure are carefully placed corals. The Latin words roll off her tongue: Anthoptilum grandiflora, Lophelia pertusa, Paragorgia arborea, Primnoa resedaeformis, Anthomastus grandiflorus and Keratoisis grayi.

There are the feather boa sea pens, cup corals, bubblegum and popcorn corals, corals that look like tiny bonsai trees and mushrooms, and a snow white bamboo coral that look like the bones and knuckles in our hands.

“Humans are always the enemy,” says Wareham, “Fishing around corals is like fly fishing around birch trees. You’re going to get snarled. It’s inevitable. Corals are very delicate and a net or trawl raking over the coral laden ocean’s bottom can be catastrophic.”

Along with fishing, some of the other threats to deep-sea corals include exploring for hydrocarbons, pollution, oil spills, micro plastics and global warming.

The challenges of studying corals are obvious. “It’s the deep sea and you need really expensive toys to get down and see them,” says Wareham. “I’ve been lucky enough to have participated in several deep-sea expeditions that used such technology including ROPOS, which stands for ‘remotely operated platform for ocean science.’”

Wareham describes ROPOS as, “the size of a small electric car with high definition cameras, one looking forward one looking down with remotely controlled arms that can pick up the most delicate thing with precision.” Think James Cameron diving for the wreck of the Titanic but much smaller with no people on board. And like cars, there are different models — ROPOS would be the Cadillac. 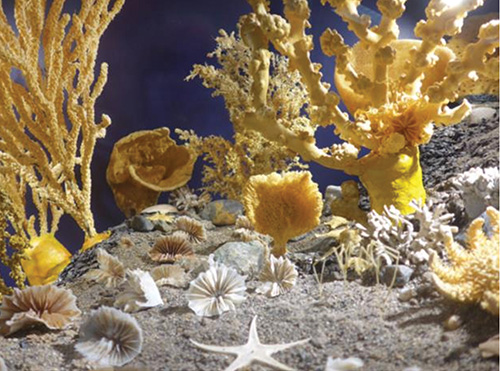 “We did five dives in total going all down the east side of Baffin Island. We came across some beautiful, amazing areas that were undiscovered. There were large sea anemone fields and a giant umbrella sea pen that was probably seven feet-plus tall.”

These underwater excursions are invaluable. “We get the big picture. You can see what the sea floor is made of, whether it’s sand or clay,” says Wareham.

“Corals are long-lived and slow-growing, and very sensitive to disturbance. Once they are damaged or removed it takes hundreds of years for some species to grow back.”

“The most important thing about corals is the habitat they provide on the sea floor.” Once the task of mapping out these important coral grounds is complete, “they can be identified as sensitive areas, and vulnerable marine ecosystems. The important message is we are moving in the right direction to identify and protect these corals.”

“What’s most surprising about corals is that they’re here in Newfoundland and how important they are. We have at least 64 coral species and most likely there are more yet to be discovered.”

Even if corals chose Vonda Wareham, the attraction is mutual. That coral she taxied home in 2004, sits on her window ledge.

Hans Christian Anderson seemed to have a good handle on what’s under the sea, even back in 1836. “Fishes, both large and small, glide between the branches, as birds fly among the trees here upon land.” That quote could just as easily be attributed to Vonda Wareham.

No Replies to "Corals Chose Me"