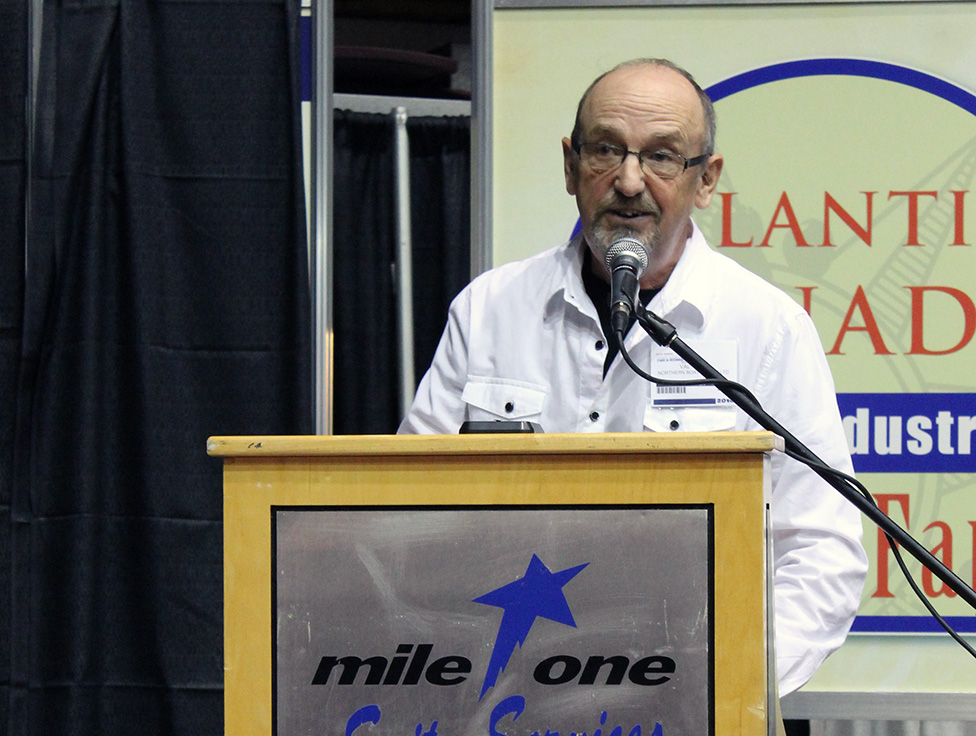 Valance (Val) Cull from Port Saunders, Newfoundland is a steady-as-she-goes kind of guy.

His friends describe him as dependable, fair, hard-working and very smart, to name just a few descriptors.

Born 60 years ago, Val lived his first 10 years in Great Brehat on the tip of the Northern Peninsula. When Val was 10, his family moved to nearby St. Anthony.

Val is highly respected in the boatbuilding and repair industry in Newfoundland and Labrador. He got his start by building a small rowboat at a very young age and then progressed through the many stages of the business to become owner and operator of Northern Boat Repair, a large boatyard in Port Saunders on Newfoundland’s northwest coast.

For years his business concentrated on vessel repair, that included everything vessel owners needed done, up to cutting vessels in two and lengthening and widening them.

People say Val Cull knows every detail of the boat building business and can do anything on a large or small scale.

Today, he is also known as the builder of a couple of the largest fishing vessels ever built in the province, including the 69-foot  Atlantic Charger that got caught in a vicious storm in September this year and sank near Baffin Island.

Northern Boat Repair is actually one of the few yards building large fishing vessels in Newfoundland these days. At the time of this writing in November 2015, the yard was busy building a 72 X 26-foot vessel for an enterprise owner in Conception Bay. This boat is the largest build undertaken at Northern Boat and is scheduled for completion in February or March 2016.

Val’s early years were fairly typical of boys in Newfoundland and Labrador fishing communities. The son of a fisherman, he spent most of his summer days in his dad’s stage, cutting out cod tongues to sell or pronging fish from the boat to the wharf. His dad, Joshua Cull, also gave Val a little corner of the stage to salt his own fish.

“I remember when I was about eight or nine, the schooner Norma and Gladys was buying salt fish up our way and they were paying $6 a quintal.”

Val laughs at that memory, explaining that a quintal is 112 pounds and $6 translated to about five cents a pound. The pay was so little in the 1950s and 60s Val said that his dad and other fishermen often resorted to the barter system and traded fish for groceries and other household needs.

As a teenager, Val fished with his father out of St. Anthony. When Joshua purchased the longliner Wavey Gay, Val fished with his dad in several northern areas, including Black Tickle Labrador. Val liked fishing but the northern cod resource was showing early signs of decline and with fish prices ridiculously inadequate to pay a decent living, he kept an eye out for a different line of work.

He would hang around with anyone building a boat, carefully observing and studying the art of wooden boat construction. He would eagerly offer a helping hand if asked. By the time he was in his teens, Val had acquired the knowledge of most boatbuilding apprentices.

It seemed boatbuilding would be Val’s destiny.

In 1973 he met Jane Hynes, a young woman from Port aux Choix and before long the two were making long-term plans for a life together. They married in 1974.

Ironically, Jane’s dad, Gordon Hynes was a boat builder. Val was hired as a labourer and worked alongside his father-in-law at Kennedy’s Boatyard in Port aux Choix and from that day, his corporate destiny was more or less determined.

Fishing vessels were built of wood in the 1970s and with a vibrant winter dragger fishery on the west and southwest coasts of Newfoundland, there was a fairly consistent demand for repair work as well as modifications on existing vessels.

There was lots of work and Val was becoming known as one of the best in the business. It was that recognition by vessel owners that led to a life game changer for Val.

In the late 1980s, Bobby Spence was going to build a new boat and he wanted Val to do the entire job. The only way that could happen was if Val owned his own company. That was the impetus for the formation of Northern Boat Repair Company. Val rented floor space at the government-owned marine service centre in Port Saunders and did the construction job for Bobby.

Val admits he is a risk taker and in 1992, at the age of 37, he made a business decision that appeared so risky that some people even called him crazy. He leased the large service centre in Port Saunders to operate his growing repair and building business.

Ordinarily, Val’s business move might not have attracted much attention, but his decision to heavily invest into the boat repair and building industry was the same year the federal government declared a moratorium on cod fishing which had long been the backbone of the Newfoundland and Labrador fishery.

“That’s why they all said I was crazy,” Val explains.

“But, I love a new challenge and this was about as challenging as it could get at the time.”

Val’s foresight and business intuition proved the naysayers wrong and Northern Boat Repair was soon carrying out a brisk business.

Fishermen diversified their operations and fished different species like mackerel, herring and others. Adapting from cod to new fisheries subsequently required different fishing gear and that, in turn, meant a need for vessel alterations as well.

Along with an increase in shrimp stocks and the addition of access to a newly discovered northern crab stock, orders for vessel upgrades and modifications poured in. It was also at the time when fibreglass became popular and dozens of vessel owners wanted glass installed over their wooden-hulled boats.

The introduction of fibreglass was the next game changer for Val. It was a totally new technology to him, but he recognized that he had to adapt or his business wouldn’t survive. He had a team of fibreglass experts come to Port Saunders and teach him and his staff about the proper use of chemicals and all the requirements of fibreglass construction.

Val’s leasing deal with government included rental of the 200-tonne travel lift that had the capacity to lift large 65-75-foot vessels in and out of the water. Having one of the largest lifts in the province, Val was soon getting calls from boat owners in other areas, including the Maritimes, especially Nova Scotia.

In 1997, Val decided it was time to make another career change and purchased the service centre, the travel lift and everything else that went with the government-owned marine service centre.

By then, Northern Boat Repair was well established with a workforce of more than 30 people and his regular client base continued to grow. Owning the entire operation outright gave him the flexibility he needed to expand on that growth with greater certainty.

By 2005, Val Cull had defied the odds and won on so many occasions that making one more major life change was less daunting than some previous decisions.

After a few conversations with Jane and their two daughters, Nadine and Natrisha, Val sold Northern Boat Repair and moved to Alberta. But Val wasn’t crazy about the lifestyle in landlocked Alberta and he and Jane didn’t stay long enough to ride off on his analogous horse and fade quietly into the sunset — far from it.

Join us next month for Part II of Defying the Odds as we track Val’s journey for the decade 2005–2015.

No Replies to "Defying the Odds"