A brightly coloured map of the world glows from a computer monitor.

It looks like a painting with bright, coloured points scattered across the oceans from one side of the earth to the other. There are 3,800 dots across the map of the world, which represent drifters, free-drifting oceanographic devices that collect data from the ocean.

These drifters measure the temperature and the amount of dissolved salt in the water (water salinity), and the readings are picked up by satellites as they bob on the top of the ocean.

While DFO scientist and oceanographer Dr. Fraser Davidson has lived in St. John’s since 1992, you may say he was a kind of ‘drifter’ too.

He was born inland in Australia and grew up in Germany, France and Canada.

“I had no relationship with the sea whatsoever, but I decided to do oceanography while doing my undergrad in Ottawa. I loved the outdoors and I wanted to do physics, so oceanography seemed a good combination.”

Davidson landed in Newfoundland and Labrador because, “I wanted to go somewhere in Canada near an ocean that I had never been before.” St. John’s fit the bill perfectly.

“Before I came to Newfoundland I really didn’t know anything about it. When I first arrived, I discovered that it’s a very distinct part of Canada, and very interesting. I loved it. When I finished my postdoctoral research in France, I knew I had to come back to Newfoundland.” 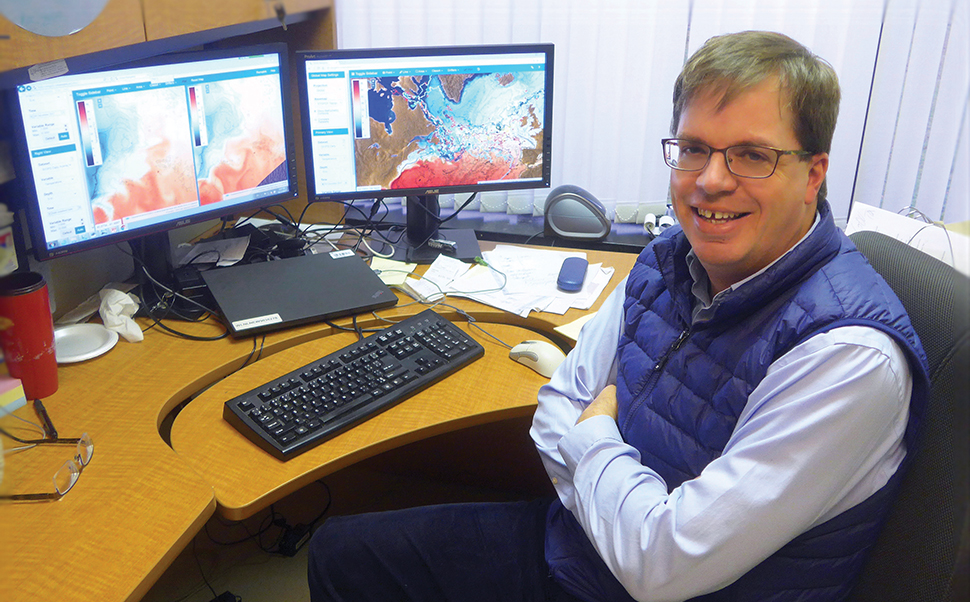 “In general, my work investigates how ocean temperature, salt content, ice coverage and currents are linked. This allows us to predict drift of an object in the water, which is useful for search and rescue missions as well as looking at how various debris or oil spills could drift in the ocean.”

Our oceans cover more than 70 per cent of the planet. There is always a lot happening and all that water plays a major role in regulating our weather and climate.

While there are currently less than 20 operational ocean forecasting groups in the world, that’s expanding.

If you love to study water, wind and waves, can you think of a better place to do that than here, in Newfoundland and Labrador?

“This is a unique place in several ways. The ocean is of high interest to the people of Newfoundland and Labrador and that’s always gratifying,” Davidson explains. “The ocean here is about the culture, life and surroundings. It defines us. So, it’s quite important.”

He pulls up a view on the screen that shows the paths that some local ocean drifters have taken around the province. It looks like colourful swirls of graffiti. You can point anywhere in its path and find out the route it took, the water temperature and the salinity. Each drifter bobs and transmits data for about 400 days.

He points to a drifter on the map that looks like it must have sprouted legs and walked in from Joe Batt’s Arm to St. John’s. This drifter had been stranded in a cove in Joe Batt’s Arm.

A fisherman was called and he picked it up and drove it into St. John’s. The drifter was refurbished and taken out on a ship and dropped into the ocean offshore from Labrador.

“It went into Placentia Bay then went over to Fortune Bay and then it came over towards the Laurentian Channel Area.”

Over time, science has discovered how ocean and atmospheric variables are interconnected to give us our weather and climate. With technological advancements there are many ways to measure these variables. 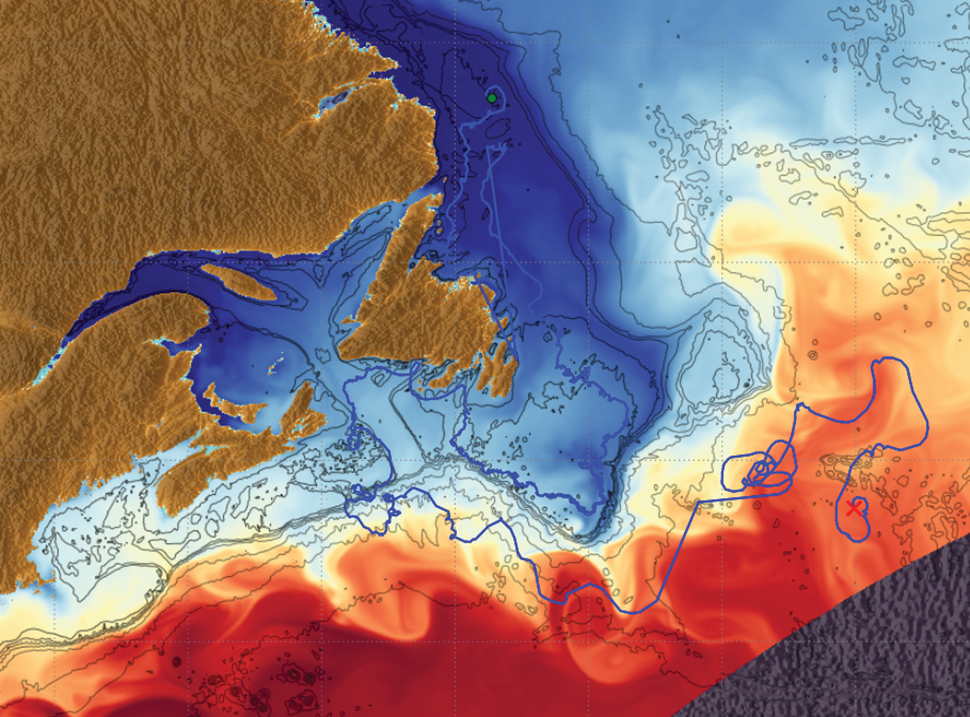 “We now have a lot of different tools and technology that can be blended together to provide us with a more complete picture of what’s happening in the ocean. Our work is to transform and assemble all these individual components into a comprehensive description of ocean conditions from which ocean predictions can be made.”

Ocean forecasting requires teamwork to cohesively assemble these elements together and to produce these forecasts.

In the past, we might have looked towards the sky to understand and predict our weather. We’ve come to realize how what we see in the sky is connected to what we see in our oceans, and as a result have an integrated approach to weather and ocean forecasting, called environmental prediction.

Researchers like Fraser Davidson and his colleagues use oceanographic data and models to provide more rounded and accurate weather history and predictions. With just under 326 million trillion gallons of water on Earth influencing our weather, Davidson and colleagues will be kept busy.

No Replies to "DFO Oceanography: Dr. Fraser Davidson — Counting on the Currents"