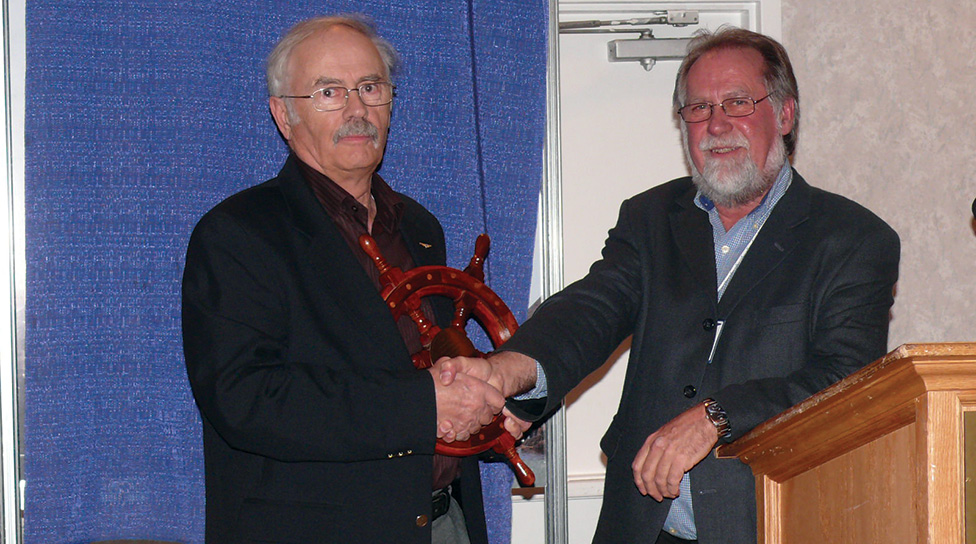 Even though he was born in Ottawa 84 years ago, salt water has never been far from Dick Stewart’s mind or veins, as he reminisced about the commercial fisheries he has been a part of in one way or another for seven decades.

“My father was from Nova Scotia but my mother was American. We moved to the Lockeport area of Nova Scotia in the 1940s and that’s when my brother and I bought a lobster fishing license. I was 12 years old,” he said.

“I well remember that we received 20 cents a pound for our catch.”

Thus began an association with the commercial fishery which lasted until February 15 of this year.

His teenage years were spent working at Vita Foods in Allendale, a company which dealt with herring and by the mid-1950s, Dick became an employee of the Marconi company which specialized in electronics.

“I worked 10 years with the company and during my off days I would sometimes hire on as crew with scallop boats fishing on Georges Bank.”

Things would take a dramatic turn in Dick’s life when it became apparent that things weren’t always on the up and up when it came to where Canadians could fish and where they couldn’t.

“At that time, the Americans could fish for groundfish on Brown’s Bank but we couldn’t. After discussing the issue with some fellow fishermen — Denton and Dakin — we came up with the idea of forming a fishermen’s association to promote our cause,” he said.

At one time it had a 5,000 membership but it eventually frizzled away as many associations do.

In this case there were no dues checkoffs so membership was on a voluntary basis.

The next step in this line of work for Stewart was with the formation of the Atlantic Herring Marketing Co-op.

During the herring fishing boom of the 1980s, a lot of purse seiners made their way from the west coast, where the herring fishery had collapsed, to south western New Brunswick where large companies basically ruled this fishery, which was highly attuned to the fish meal and oil sector of the industry.

“During Romeo LeBlanc’s tenure as federal fishery minister, he made it possible for crewmembers to buy these seiners, as the emphasis was changing to a food fishery from one which concentrated to fish meal and oil,” he explained.

This is when the Co-op made deals with Eastern Bloc countries to sell herring directly to factory freezer trawlers from Poland and the Soviet Union who spent the fishing season moored just a mile or so from the Yarmouth Light.

At that time, the fishery was being prosecuted by harvesters from throughout Atlantic Canada.

Then the stock collapsed and during the past decade or so this has been a difficult fishery, surviving by a willingness of fishermen and the federal fishery department to work hand in hand to come up solutions to the many problems which faced the industry.

“This was done out of necessity. We had to put money into our industry or it would have died. And I may say that at this time, this fishery is the best managed on the Atlantic coast,” Stewart said.

Strict monitoring of the biomass though test fisheries paid for by the harvesters themselves has had a lot to do with their success.

Although the fishery is a pale imitation of what it was three decades ago, it’s surviving and indeed showed positive signs during the past year in terms of biomass and larger, marketable fish.

During his dealings with DFO over many years, Stewart has noticed many changes, most of which he isn’t too fond of.

Gone are the days when you could call a deputy fisheries minister or the minister himself, or that they would return your call, he said.

“Now it’s all e-mails and computers. You don’t get to see anyone face to face anymore and that’s a real shame. I used to know everyone I had to deal with in the federal fishery department. Now I hardly know anyone,” he mused.

The gutting of the federal fishery department — especially its scientific branch — by the Harper administration, was a blow which will take years to recover.

“By muzzling our top scientists and forcing them to leave the department, we lost decades of knowledge which will have a huge impact on the fishery of the future. We lost our reputation as a country really serious about the oceans and the fisheries on an international scale. And once lost reputations are hard to regain,” he asserted.