Dr. Robert Gregory is a research scientist with Fisheries and Oceans Canada and also an adjunct professor at Memorial University.

One could say that he has been schooling young cod and students since 1994.

Gregory studies the early-life stages of cod. He focuses on the nearshore where waters are 10 metres deep or less. He arrived here in Newfoundland two years after the cod moratorium and did he ever have his work cut out for him. He realized that no one knew where young cod called home and since they weren’t talking, his studies began. 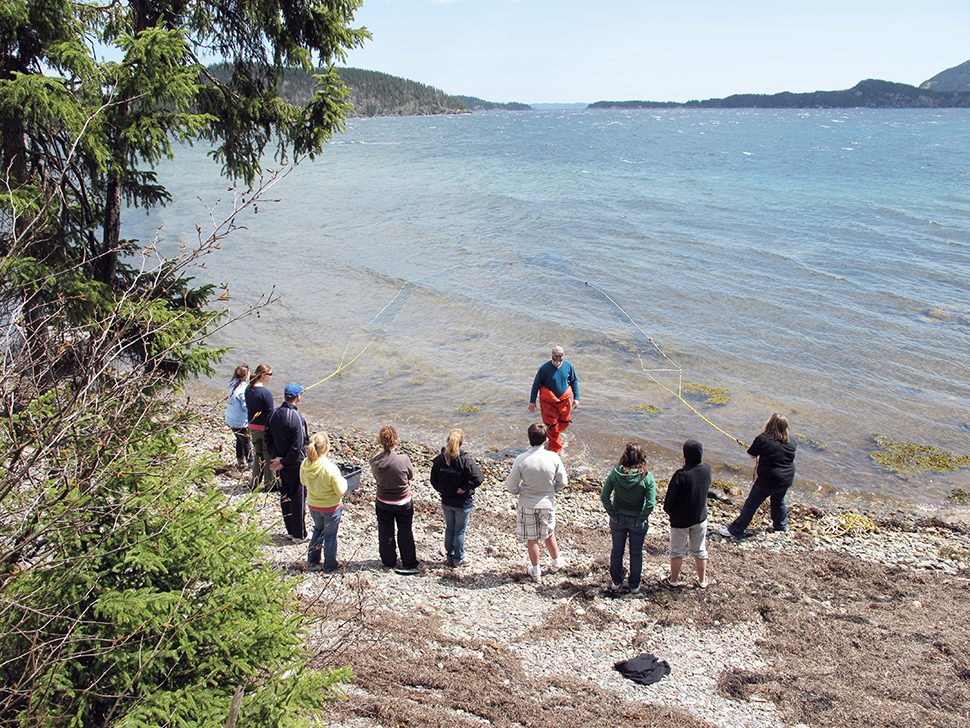 Okay young cod where are you hiding? Very early, Gregory found that young cod were found in eelgrass, which is a vascular plant that has long ribbon like leaves and grows nearshore in salty waters. He describes it as, “Very tall and close together, not quite like your lawn but close.” He would take a closer look.

“Teaching and mentoring weren’t real objectives of my work but was a serendipitous by-product.” Take the search for young cod and combine that with Gregory’s knowledge and teaching. Add the desire of graduate students and future scientists to learn. What you end up with is a match made in marine biology heaven.

“One of the things that I like to do is work side-by-side with my students in the field.”

“My students get real field experience. They learn to handle the boats, process fish samples, identify coastal fish species, keep scientific records, and conduct their own research,” said Gregory. “It’s the way you approach things. I’m always getting my proverbial feet wet and you can teach more effectively when you’re actually hands on.”

The rewards for Gregory are almost immediate.

“Seeing students begin to change their way of looking at ecological questions, because they’re actually doing science in the field, never gets old for me. Their first realization is — science is not easy. The second one is — this is fun! If you’re not enjoying what you’re doing in science, you shouldn’t be doing it. I have maintained that conviction since the beginning of my career.”

Newman Sound is just under a three-hour drive from St. John’s and Gregory remembers one particular trip to do research in the field.

“It’s amazing what can happen on the drive to the field. A student and I were throwing ideas for his thesis topic back and forth during the drive to Newman Sound and by the time we arrived, we had come up with the rough idea for what would become his PhD thesis.”

He has also had the opportunity to keep in touch with many of his students over the years, mentor many of them and watch their careers bloom. 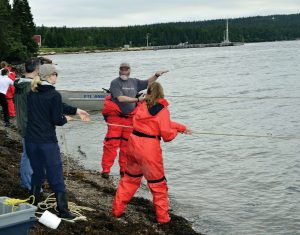 Gregory has worked with 37 undergraduate Bachelor of Science (Honours), masters, doctorate and postdoctoral students, he says.

“Many are smarter than me, some are brilliant and a few have written many published research articles.” These students are now working around the globe and 19 have worked or continue to work with Fisheries and Oceans Canada.

Gregory tells the story about a master’s student, Danny Ings, who challenged the prevailing thought that young cod come near shore with monthly high tides. Ings was insistent that it was strong wind. Gregory told Ings to “prove it” and he did so, proving Gregory entirely wrong.

Ings said, “Bob’s very supportive as a teacher and mentor and in the case of my master’s project, I really appreciate that he was open to researching different views of the biological patterns that we observed. He’s enthusiastic about research and encourages students to take a broad view of the systems they study.”

“This is what drives science discovery — constantly proving and disproving theories and continuing to ask questions.” Scientists have to be willing to be wrong. For Gregory, having a student prove him wrong is, in many ways, very rewarding.

Gregory does not limit his drive for inspiring future scientists to the university level. He has presented to high school science students on the beach at Newman Sound Terra Nova National Park many times over the years.

During a professional development day, Gregory did an ecological demonstration for a group of high school science teachers. “You could see many of them were really motivated and wanted to know what coastal ecology is all about and what we were researching on the beaches not far from the schools where they teach. However, some teachers were reluctant participants at first.”

Gregory then pulled in a net, opened it and began to talk about its contents. Reluctance turned into interest by the end of the demonstration, and the teachers said how great the presentation was and thanked him.

“No, I thank you,” said Gregory. When they looked at him in puzzlement, he said “What you’re doing is training the students that I will eventually hire. I inherit your success.”

Hopefully he’ll get to see those students, but one thing we know is that Gregory’s findings on eelgrass beds have been game changing. Not only has he discovered what great feeding grounds and protection they offer for young cod, but his research shows that young cod in eelgrass have a 17,000 times better survival rate.

“I will continue doing this research until I physically can’t do it,” says Gregory. With no plans to retire, he wants to continue his work, both with cod and mentoring students. When you open the net that Dr. Robert Gregory has cast out over his career, it’s full.

No Replies to "Dr. Robert Gregory: Casting a Net"