As a child growing up beside the sea in Yarmouth, Nova Scotia, Bob Gregory spent a lot of time in tide pools with his friends.

They would jump and splash through strands of green plants they’d call grass or weeds.

Well, Dr. Bob Gregory now knows how to spell nature scientist and a lot of other big words. He also knows those green plants he used to play in are called eelgrass. 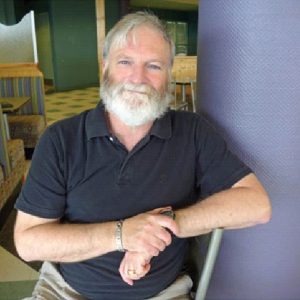 Gregory has been a research scientist with Fisheries and Oceans Canada for 16 years and has been analyzing the productive capacity of various ecosystems around Newfoundland and Labrador.

He found out very soon after his arrival in St. John’s in the mid-1990s, that even though almost no one knew who he was nor had any idea what work he was doing, they were interested in his ecosystem.

“One of the things that I noticed when I moved here, and that I’d never seen anywhere I lived before, is that I could walk down the aisles in Dominion and I would hear people asking questions about the fishery,” says Gregory. “It was quite a thrill to me that people cared about what I was doing even if they didn’t always understand the details fully. It became a part of my job to explain what I did to as many people as I could. Knowing that people here care about what I do, to me that is exciting.”

The ecosystem he focuses on the most is the near-shore coastal environment — waters less than 10 metres deep. He mainly works in shallow waters three to five metres deep, which are nursery areas for various fish species along the coast. The species he’s been studying most is cod. It’s important work. Gregory arrived in Newfoundland in 1994, two years after the cod fishery collapsed and the economic downturn was well underway. Many were looking for answers to explain the collapse. If you look at the lifecycle of a cod and there are no young fish, there wouldn’t be any adult fish.

“When I first arrived, my colleagues and I wondered, where do cod grow up? We had no idea where the juvenile cod were — none.”

Gregory says the ocean is a dangerous place for very small fish. Young cod will head to shallow water or find a place to hide so they can survive.

He started to look at eelgrass, the plant he used to play in as a young boy. It’s a vascular plant, which means it picks up some of its nutrients from its roots in the seabed and it grows mainly in shallow water less than five or so metres deep. It grows in clumps, forming structure in shallow areas for small fish to hide in and it also produces food for bacteria, which breakdown dead eelgrass on the seabed, and in turn become food for plankton, and in turn for small fish, like young cod.

Gregory describes how an eelgrass meadow looks from the air. “It looks like your front lawn but not as thick,” says Gregory. “The grass is about 75 centimetres long, so between two feet and not quite three feet tall. It is very tall and very close together and because of its height, it fills your visual reference.” 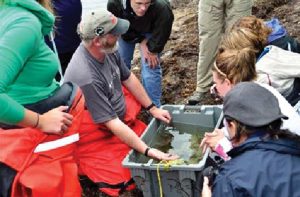 Eelgrass is like a nursery school for juvenile cod. They do well in groups. They float or drift with wind and wave action to the nearshore where they settle, or get dropped out of the plankton, into the eelgrass. “Juvenile cod that make it to the eelgrass beds do really well because the food is there, the shelter is there and they don’t have to fight the currents as much,” says Gregory.

The breaks and patches in eelgrass are important for cod youngsters.

“We find that fish like patchy eelgrass more than meadow. It’s not well enough that they have to hide in it but more that they can scoot into it if a predator comes by. They also have to feed in it, so they find their food by hunting around the edges of the eelgrass.”

His research shows that juvenile cod in eelgrass have a 17,000 times higher survival rate than those that are not under cover. Their days at eelgrass nursery school provide a relatively safe respite from the fish-eat-fish world of the ocean.

The important point to note here is that the mortality rates of juvenile cod are very high. Birds and animals like a good feed of cod too.

“Their most dangerous opponent is actually an older cod,” says Gregory. “So they’re hiding from the bigger versions of themselves or from their brothers and sisters who are a year or two older. The death rate of an egg and larvae, which are an inch or less long, may be as high as 80 or 90 per cent per day. They are just dying in droves and that’s normal. That’s why cod have millions of eggs and one large cod might have several million eggs.”

Peak spawning occurs in May in Newfoundland waters. By the time the juvenile cod arrive in the eelgrass, they are about 30 to 40 millimetres long or a little over an inch. By the fall, they will have grown to about six inches long.

“When counting juvenile cod, depending on the time of year, through our research, we can see as many as many as 1,500 juvenile cod inside a 1000 m² area, or a few as none in some years. That tells us how good a year it’s going to be,” says Gregory. “If we don’t see a lot of fish settling in the near-shore in late summer, the spawning was bad or growth was poor.”

Juvenile cod do occupy other parts of the seabed where there is no eelgrass because they eventually become too large to feed and hide in the eelgrass. “As long as the cod remain small, they can take shelter in the eelgrass,” says Gregory. “Once they become one year old, they pack their bags and move into the surrounding environment where they have finally outgrown their predators and it’s a safer place for them.”

Gregory explains, “while they’re in eelgrass, and shallow waters you can count them, and then they move a little further away, where we can scuba dive and still count them. When they are two years old, they disappear — they have gone somewhere else.” Gregory says they have been waiting for technology to catch up so we could find out where, and a couple of years ago, they started using small acoustic tags on fish that were one-year-old, which allowed us to follow them better as they grew older.

“The interesting thing is that these young fish were going further than we ever imagined,” says Gregory. “Some travelled up to 80 kilometres in a month, some travelled over very deep water in almost straight lines, and they were doing most of their movements over winter which surprised us. We had originally thought they moved very little.” The tagging studies showed that at age one or two, they stay close to home. When they were big enough to escape predators, they swam to open water as fast they could.

“They are not being chased down by predators in the winter and we suspect the predators are not active either.”

Dr. Bob Gregory has spent the last 20 years investigating, with great care, all you could ever want to know about young cod and he’s not been afraid to ask. Things like: how do cod live and move; what they eat; and who are their predators? The research he does today will help with the investigations and assumptions that go into the scientific models to predict the health of future cod fisheries.

“Eelgrass has given juvenile cod a refuge habitat,” says Gregory. “It has helped with conservation planning and is optimal habitat for young cod, where they do very well. They can go from an 80 to 90 per cent mortality rate a day as larvae to less than 20 per cent a year a couple of years later when they are three-year olds. It is when they are small, that they are the most vulnerable to predators, and when they need eelgrass and kelp to hide in.”

Dr. Gregory has found where cod go to “nursery” school. Now… where do they go to “elementary” school?

No Friend of Poachers

No Replies to "Eelgrass Nursery School for Juvenile Cod"