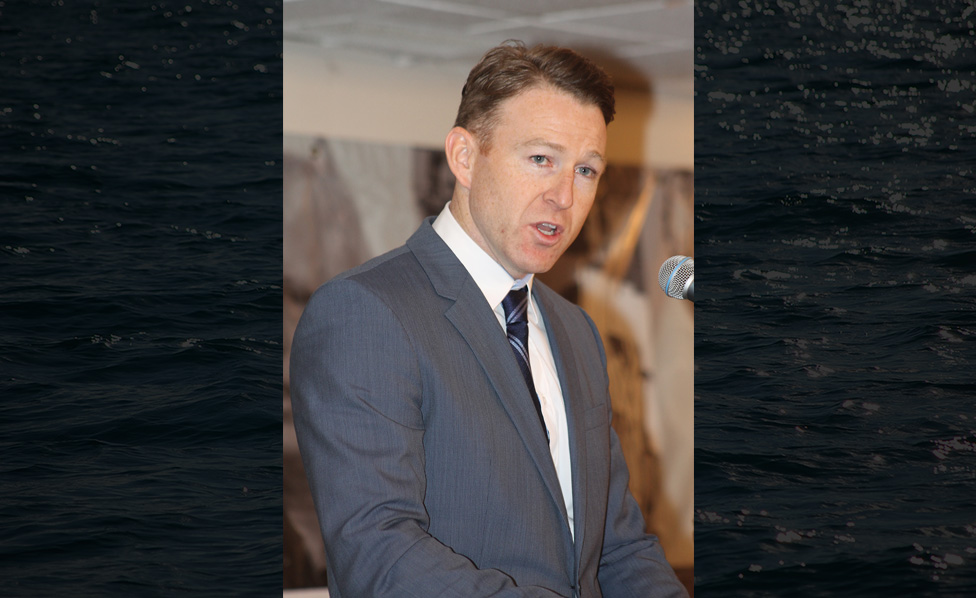 The new president of the Fish, Food and Allied Workers (FFAW-Unifor) is not wasting any time in outlining his priorities for the powerful Newfoundland and Labrador union.
Keith Sullivan spoke about his mandate during a recent interview with The Navigator.

While there are many issues currently facing the FFAW, fair access to adjacent resources is at the top of the list, the labour leader explained.

“Most people are aware of the difficulties we have facing us with the northern shrimp. If everything stays the same with the management regime, we will see massive cuts for the inshore harvesters who deliver their product to the plants and processing facilities operating in Newfoundland and Labrador — and all those jobs and spinoff jobs that come with it. While there will be relatively minor cuts to an offshore sector which is doing better than it ever has done before.”

Federal quota reductions for 2014 included a cut of 20 per cent to Shrimp Fishing Area Six, with the inshore fleet having its allocation reduced by approximately 10,000 tonnes while the offshore fleet allocation was reduced by approximately 1,000 tonnes. In September 2014, the North Atlantic Fisheries Organization (NAFO) recommended a moratorium for the shrimp stock on the Grand Banks. NAFO’s advice was released specifically for the 3L fishing area.

Sullivan said the shrimp should be going to those closest to the resource, which will create the most benefits for the people of the province.

As a result of the ongoing adjacency issues, Sullivan said the FFAW will be ramping up its lobbying efforts in February and is planning meetings with those negatively impacted by the quota cuts, including harvesters, plant workers, small business owners and municipal governments. “We are going to need as many allies as we can get to create awareness around this issue. It doesn’t necessarily have to be this way — both boat sectors can share the pain, the inshore and the offshore. It is not one or the other.”

He added that a similar scenario is being played out with the halibut fishery, particularly in 3PS.

“Harvesters don’t have access to that (halibut) resource. It is very frustrating and I can understand why. So we will be having discussions with the federal government on how we can increase access for the adjacent people in those areas as well.”

Not surprisingly, snow crab is another topic at the top of Sullivan’s priority list.

“Given the value, crab is so important to harvesters and processing workers. We have seen concerns in the north in 2J and 3K in recent years. And more recently there are concerns about the resource in 3PS. We will be paying very close attention to the management of those resources, upcoming. At this time, the markets for snow crab, combined with the exchange rate, looks like we are on a relatively stable footing which is generally positive.”

While the stability of the shrimp and crab industries have been ongoing concerns for the FFAW for many years now, the re-emergence of groundfish, notably cod, has now become a major focus of the union.

Sullivan said efforts have to be made to find more markets for cod, notably the improving stock in 3PS, while at the same time improving the quality of the catch delivered to buyers and in turn increasing the value.

The FFAW president added that for the first time in a several decades, northern cod is back on the radar.

“We have a resource there that’s improving. It’s growing by (multiplier of) 30 times since the 1990s. The exploitation rate is extremely, extremely low and we have to start rebuilding that industry. The time is now for rebuilding that, so we will be having a lot of discussions with our members about that this winter too.”

Another part of Sullivan’s mandate is a stronger focus on the next generation of the fishing industry, starting with the processing sector.

“I don’t think the processing sector has invested enough in that side of the industry. These places need to be healthier and better places to work. We need to ensure we have better ventilation and ergonomically better facilities. We have seen people working (in plants) in December in places in Newfoundland — we can extend the season, we can make these better jobs. The important thing is people can see a livelihood and the incomes are good. That’s what is going to be important to draw people into and this is like any occupation and the fishery is no different.”

On the harvesting side, the same thing applies, Sullivan noted. Young people looking at the harvesting sector as a career choice need to see opportunities where they can settle down and raise a family and make a good living, he added. “This is done by getting more for the products that we have and a lot of that might stem from a focus on marketing, which I don’t think we, overall as a province, have done a good enough job. We have done a good job at talking about it but we have not followed up on it with actions and plans to maximize the value of our products.”

The new union boss obviously has grave concerns over Ottawa possibly reneging on its $280-million portion of the joint federal/provincial $400-million fund tied to the Comprehensive Economic and Trade Agreement (CETA) between Canada and the European Union.

Sullivan said the union has already been speaking with the various stakeholders involved with the agreement, emphasizing the importance the fund could have for further development of the fishery in the province.

“An investment fund for industry renewal is something we shouldn’t give up on and hopefully it will be delivered. There are a lot of areas that could use investment, including transition to groundfish and concerns we have in shellfish. We have to reposition ourselves slightly. We do bring in a good quality product right now, but we have to improve that right through the value chain — whether it is on a fishing vessel or infrastructure on a wharf or right down to marketing that product.”