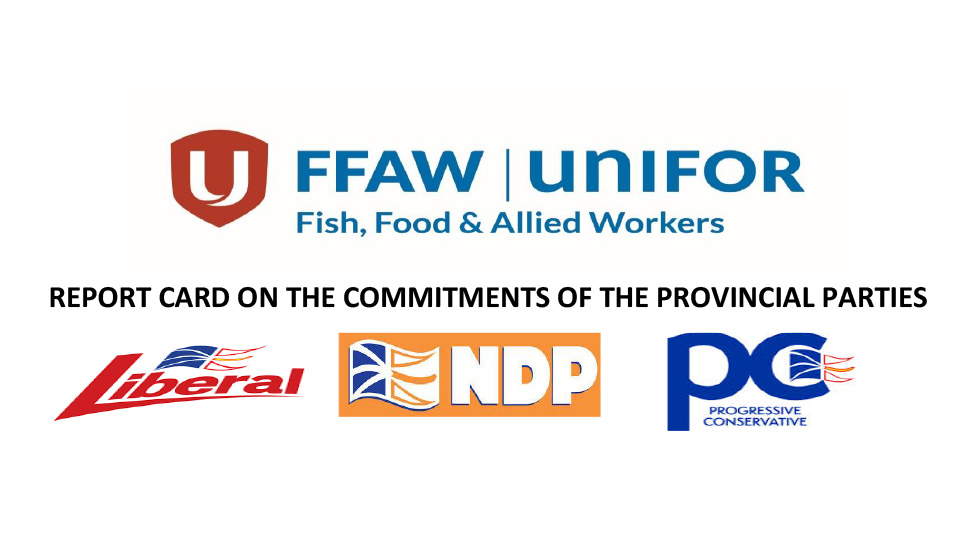 The FFAW-Unifor has released its report card on the election commitments of the provincial parties on issues of importance to its members.

“This election is important to our members and their families,” FFAW-Unifor President Keith Sullivan stated. “While a new federal government provides hope for critical changes in fisheries management, the provincial government still has a vital role to play in ensuring that the people of Newfoundland and Labrador receive the maximum benefit from the resource in our adjacent waters.”

The report card was based on responses from the federal parties to a series of questions posed by the FFAW earlier this month. “We wanted answers to particular questions and not just vague statements,” Sullivan said. “The more definitive the commitment, the higher the grade.”

There were positive responses from all parties in regards to investment in fisheries technology, infrastructure and marketing, in addition to the $120 million for the fisheries renewal fund. “The union was pleased to see parties committed to providing better oversight of the Hebron Benefits Agreement, to provide good jobs in fields such as metal fabrication,” Sullivan said.

The provincial government is also responsible for the entire private sector labour relations structure, which has received inconsistent treatment over the past decade. “The creation of the standing fish price setting panel has been a progressive step forward,” Sullivan added. “With that said, regressive laws that deny card-based certification and allow replacement workers remain challenges to the working people of Newfoundland and Labrador. The NDP demonstrated an understanding of the importance of these issues to workers.”

Overall, Sullivan was encouraged by the responses that were provided. “We are pleased that all parties provided responses to our questions. These commitments provide insight on how we can expect to work with the next provincial government.”

The questions posed to the provincial party leaders touched on a variety of issues, such as investing in technology and infrastructure for a new cod fishery, requiring consultation with harvesters when considering new aquaculture projects, and enforcing the current Agreement in International Trade that benefits our members in the brewing industry.

Sullivan says he is committed to informing the FFAW’s membership of the provincial leaders’ positions on issues important to union members. “The report card and all three letters from the parties leaders are posted on our website so that all members, and the general public, can gauge how each party would conduct labour and fishery policy if elected.”